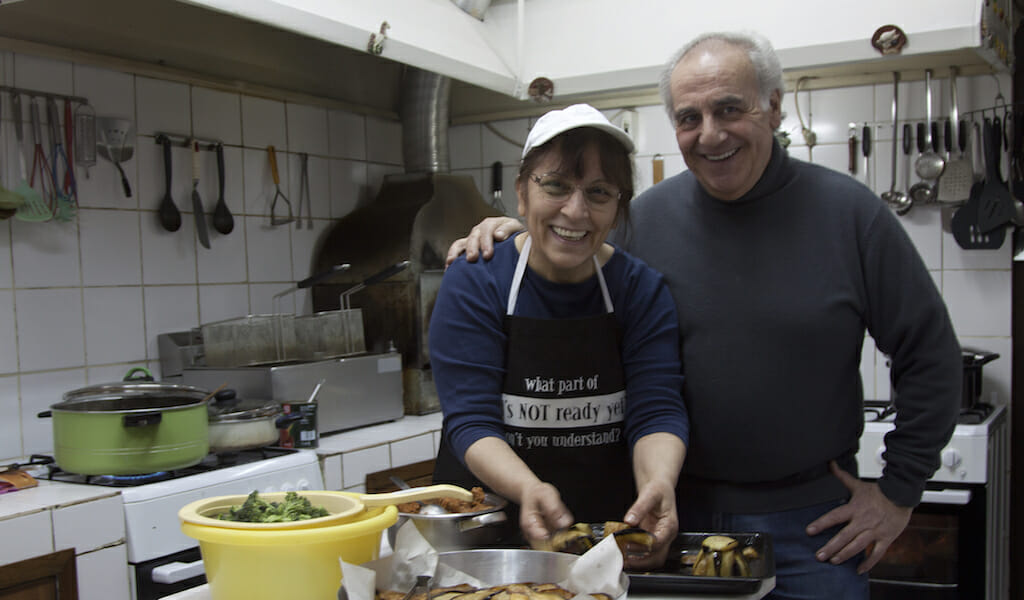 The first time we officially met was at our bacchanalian book launch down a Galata side street in 2010. A natty beyefendi with neatly manicured sideburns hovered around the edges of a group as we signed copies of Istanbul Eats, Exploring the Culinary Backstreets and clinked Efes cans with friends, readers and party crashers. He found an opening and approached. “Do you know who I am?”

He introduced himself as Levon bey, the owner of Mutfak Dili, a small restaurant down in the Perşembe Pazarı hardware market, in the seaside neighborhood of Karaköy. He’d come to thank us in person for reviewing his restaurant and the strange fortune it had brought to him. He described a lone Japanese backpacker who arrived for lunch one day holding a printout of the review from our website. At some point there was also a Russian tourist with a printed out translation. All of this was simply unfathomable for Levon bey and his wife, Hayguhi, in 2010, a time before food media and social media crossed streams into a beam so bright that every hole in the wall became illuminated for all to see online. Back then, these unexpected guests were, as they say in Turkish, a “sürpriz.”

Over the next decade we got to know Levon bey well, as we dined at the restaurant regularly and eventually included it as the breakfast stop on our culinary tour. He’s an eccentric character with a clear baritone voice that he exercises in the Armenian church choir in Moda, where he lives. That photo of him leaning on a vintage green Mercedes? He’d bought the car from a famous kanun player and restored it himself, piece by piece. Hayguhi writes poetry and would host literary meetings at the restaurant. They have a son built like Charles Atlas and his name is Cesar. 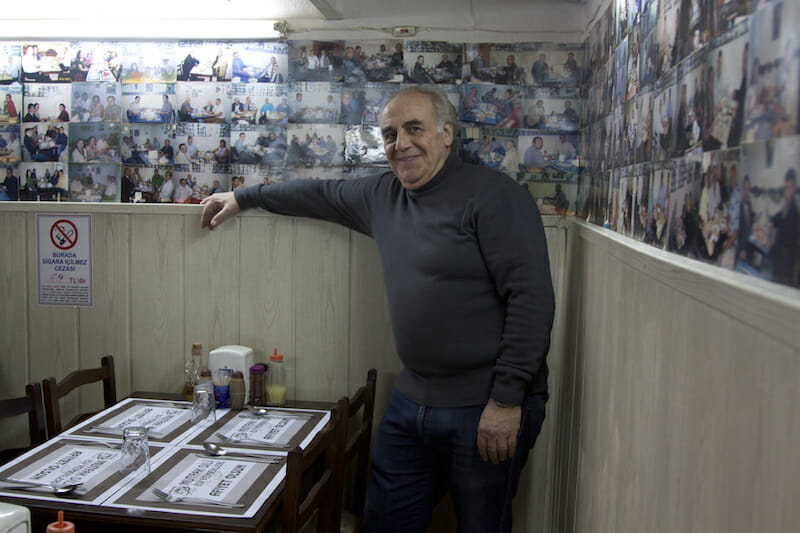 Along with biographical potpourri we came to know the cooking of Hayguhi as well as our own mother’s. From her silky roasted eggplant to her tas kebab, so soft as to be denture-friendly, and playful desserts like the aşkım aşkım, a chocolate pudding love note covered in sprinkles. Mutfak Dili was more than a typical esnaf lokantası that reliably turned out home-style dishes – it was a slice of home itself with Hayguhi in the kitchen and Levon bey the benevolent host.

It was the lack of food options in the neighborhood that compelled the couple to open their own restaurant. Selling ball bearings for decades from the same storefront, Levon grew tired of the food on offer. “There weren’t any restaurants in the area that served our kind of food back then – just kebab, lahmacun, fish and hamburgers,” Levon explained. So in 1989, he and his wife opened Mutfak Dili, curing the lunchtime blues of workers in the hardware market and offices of Bankalar Caddesi who were missing a good, honest home-cooked meal. “Not to brag, but my wife is a very good cook,” he added.

Indeed, on our first survey of Mutfak Dili, with its blue-and-white painted facade, the clubhouse feel of the dining room, and the quiet outdoor seating area in the alley across the street, we knew it was not the typical hardware market eatery. Around the corner you can haggle for an anchor chain as thick as sewer pipe. The man passing by, yelling into his phone, could be making the drill bit sale of the century. Open bins of pigment, men knotting nautical ropes, rooms filled with springs, and the constant whir of the tea vendors animate the tableau of the market. You’d expect some döner and a pilav cart, but nothing so loving as Mutfak Dili. And so, Levon and Hayguhi’s unusual recipe of tenderness, charisma, old Istanbul beyefendi-tude and good cooking set in motion a lunch tradition – one that even Anthony Bourdain witnessed on an episode of Parts Unknown – that seemed like it may never need to end.

Down in the Persembe Pazari, he and his wife will surely be missed by many shopkeepers on a daily basis as the lunch hour rolls around.

Then, we received news last month that Mutfak Dili, after 30 years in business, had closed its doors. “This pandemic finished us off,” Levon said.

As Levon explained, they were forced to close for three months in March, prohibited from leaving the house due to their age. Then they took another month to wait before reopening but Hayguhi needed knee surgery and recovery took another two months. “We were tired. It was time for us to quit,” Levon said.

There’s talk that Cesar might take over the space and open his own business, but it won’t be Mutfak Dili. Levon told us that if he found the right place, close to home on the Asian side, he might open up a café but never again a restaurant. 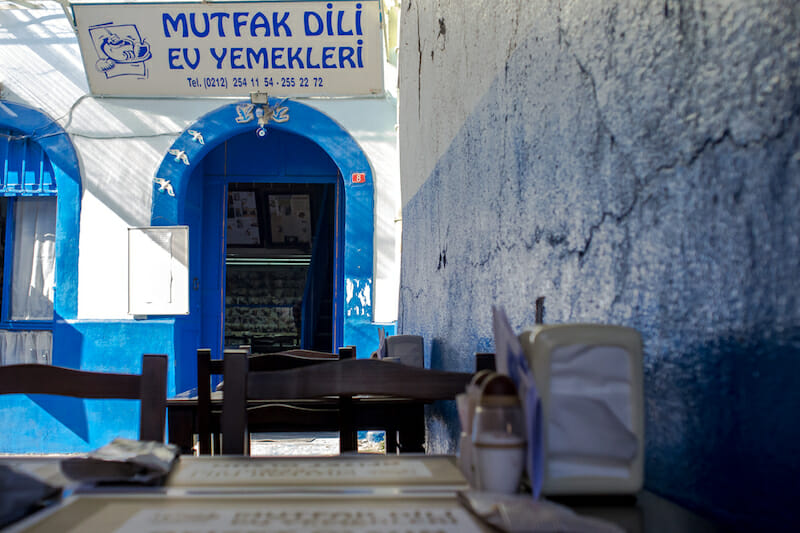 Down in the Persembe Pazari, he and his wife will surely be missed by many shopkeepers on a daily basis as the lunch hour rolls around. We hate to consider the disappointment of a lone traveler rolling up hungry with an outdated copy of our book, finding Mutfak Dili’s doors closed.

In his visit to Mutfak Dili, Anthony Bourdain asked Levon’s son, Cesar, “Do you think there is a place in modern Istanbul for romantics?” Cesar responded with a tribute to the “romantics” protesting in Gezi Park and their brutal eviction by Turkish police. But we like to think Bourdain was hinting at other romantics in his midst, the poet in the kitchen and her doting, centilmen husband. And though their place in Istanbul is rapidly changing, we like to believe that there’s still room for them.

We are sad to see Mutfak Dili go but look forward to Levon and Hayguhi’s future projects, ever grateful to have had the chance to get to know them. 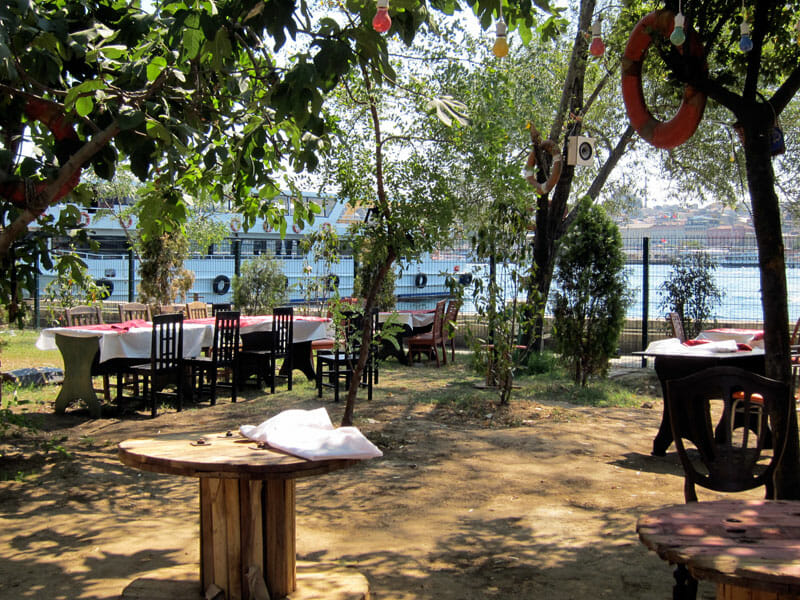 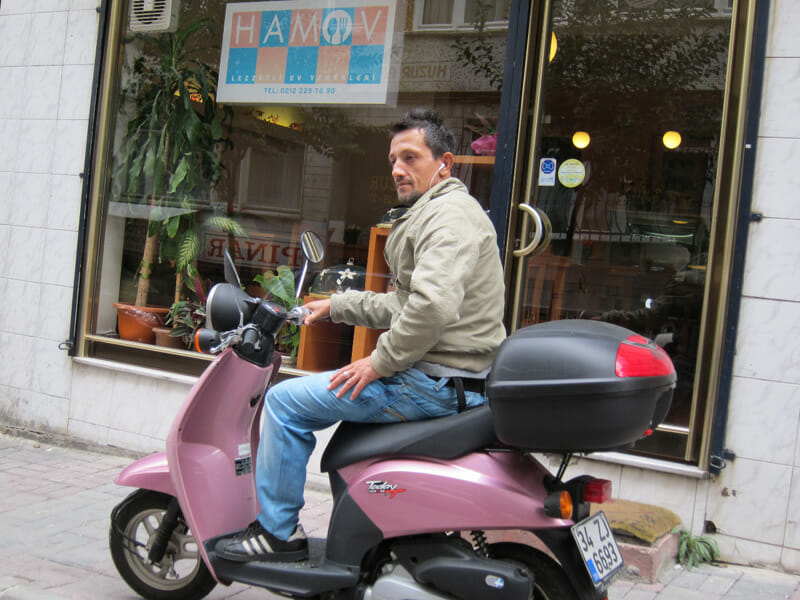 Istanbul | By Istanbul Eats
By Istanbul Eats
IstanbulAround lunchtime, the phone at Hamov never stops ringing. The little pink delivery scooter and its tireless driver stay in perpetual motion in order to feed a neighborhood full of loyal customers good, home-style lunches where they seem to prefer it – in their homes. But Hamov is not just a delivery place; its small…