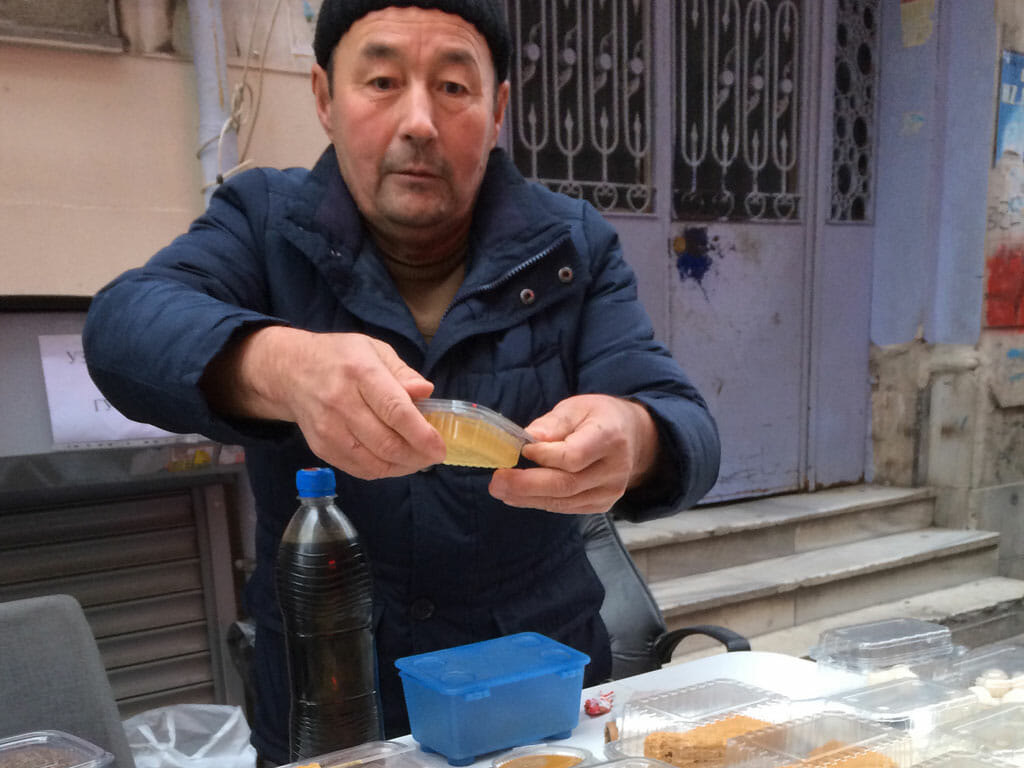 Around Kumkapı – and the World – in a Day

In Istanbul, there is a single neighborhood where one can find Uzbek mantı, imported Ethiopian spices and hair products, smuggled Armenian brandy, Syrian schwarma and sizzling kebap grilled up by an usta hailing from southeast Turkey’s Diyarbakır.

Kumkapı – a shabby seaside strip of century-old homes, Greek and Armenian churches and residents from a vast array of countries that most Americans couldn’t pick out on a map – is far and away the most diverse place in Istanbul. Nowhere else comes close.

In perpetual motion, Kumkapı is home to a rotating cast of eclectic restaurants that cannot be found anywhere else in the city. Many of these open and close before we can squeeze in a second visit. This usually isn’t an indicator of quality, but a condition of the territory: perhaps the proprietor has moved on from Istanbul, the purgatory for economic migrants and refugees. Maybe they’ve been shut down by the police.

One thing that is guaranteed, however, is that a hungry and adventurous soul is sure to whet his appetite for exploration and cuisines from all over during an afternoon in Kumkapı. Venturing to the area on Thursdays, in time for the weekly neighborhood market, is highly recommended. In addition to the ubiquitous tables of farm-fresh produce and dairy, clothing stalls carrying fashions more suited to Turkmenistan and Uzbekistan are in abundance. Surly Russian women sit behind tables of pork sausage and other interesting goods probably not available anywhere else in the city. Keep your ears peeled and you will hear 10 to 15 different languages at minimum while traversing this market. 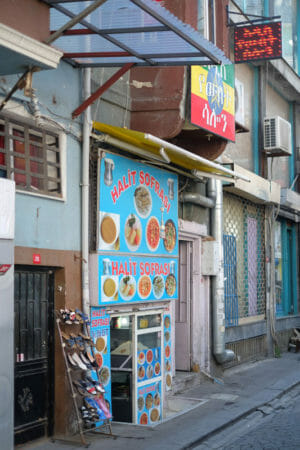 A short trek across Atatürk Boulevard from the Yenikapı metro station is Katip Kasım Cami Street, where a proper journey through the neighborhood begins. Near its start on the right-hand side is Halit Sofrası, a tiny, basement-like rice and beans shop, located just below an Ethiopian hairdresser. This is where the culinary festivities begin. Halit Sofrası serves simple, working-class fare found all over the city, but with an extra layer of magic courtesy of Halit usta himself, who wouldn’t disclose the recipe for his exquisite kuru fasulye. “There are some spices,” he said hesitantly.

Taking the immediate right on Hadım Odaları Street, one encounters a small shop selling Ethiopian goods. We’ve been told that an Ethiopian woman cooks her country’s fare on certain days, but police pressure makes service erratic. Perhaps acting as the symbol of Kumkapı, this shop is owned by a young Turkish guy from Adana named Ramazan, whom we’ve seen serving nargile and coffee to African guests. Though a serious enthusiast of East African culture, Ramazan has yet to make the trip to Ethiopia. “I’d never return if I left,” Ramazan said, flashing a wide smile.

Back on Katip Kasım Cami, an unlikely tandem awaits just ahead: the Samarkand Uzbek restaurant, which also doubles as a Van kahvaltı sofrası (a den serving a hearty Kurdish-style breakfast). On a recent visit, we enjoyed their mantı, more substantial, billowy and juicy than its subtle, compact Turkish counterpart. However, we couldn’t contain our curiosity regarding how Van – the southeastern province famous for its elaborate breakfasts that are consumed all day – came into the picture. We asked the Uzbek proprietors, who come from Andijan in the Ferghana Valley, who said they opened up shop with a partner from Van, and while that relationship has since ended, the breakfast will soon make a return.

On the next left is the smaller Al Baraka, our preferred spot for Uzbek (also run by folks from Andijan), although there are at least 10 others to try in and around Kumkapı. We feasted on a meal including chuchvara, a hearty soup with miniature dumplings. Also present were samsa, small pastry pockets stuffed with minced beef, a cousin of the Indian samosa. We capped the meal with a cold leg of smoked chicken, not something one comes across often in Turkey, served after being hacked through the bone. It almost tasted like ham, another delicacy that’s hard to come by around these parts. Bookended by fresh Uzbek bread and green tea, this meal set us back only TL 30, less than $11. 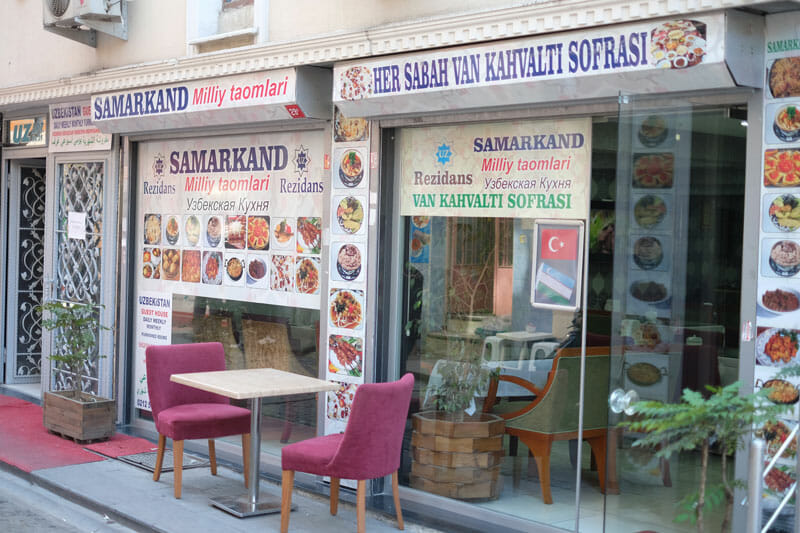 Making our way back onto the main street, Katip Kasım Cami abruptly turns into Mola Taşı Street, but the vibe remains unchanged. Immediately on the left is a no-frills, yet thoroughly solid kebap shack run by the charming Sadık usta, who sports a mean mustache wrapped around a perpetual grin. Sadık usta, who hails from Diyarbakır, is, like the majority of the Turkish citizens in Kumkapı, a Kurd from the southeast.

Another narrow street, the first left past the Armenian Patriarchate, was until recently home to a lavaş maker from the republic of Armenia. Though the Istanbul Armenians that built much of Kumkapı’s classic housing stock are all but gone, tens of thousands of people from Turkey’s landlocked, economically depressed neighbor have settled in the city, often illegally, for the prospect of a better life. On a previous visit to the area we were surprised to see this flatbread baker with its sign in the Armenian alphabet proudly displayed street side. Though we were fortunate enough to purchase at the time some of the fresh lavaş from the young woman running the place, her husband told us that they were soon closing down and opening up in another location. For now the bakery has yet to reopen and the neighbors next door – also from Armenia, selling a variety of goods presumably smuggled in on buses – claimed it was closed for good and suggested we instead check out their bottles of Armenian brandy. “We don’t have Ararat” – the most famous brand – “but all Armenian brandy is good,” said one of the half-dozen or so men crouched in the shop. We were sold. One gentleman added that we could purchase lavaş from them, also brought in directly from Armenia. We passed, hoping that the original lavaş shop, with its fresh wares and one-of-a-kind sign, would open elsewhere soon. 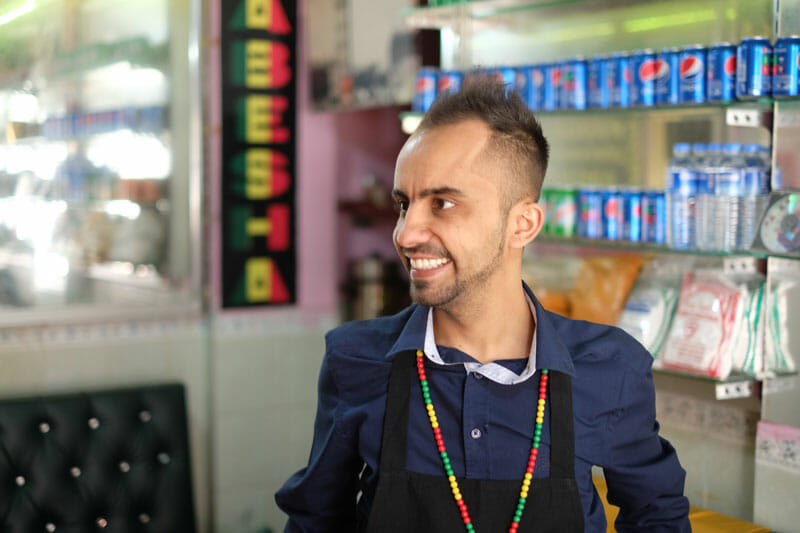 We still have yet to try the Syrian schwarma alongside what appears to be saffron rice and a spicy chili sauce. We wonder where the Georgian breakfast spot went and when the Nigerian restaurant is going to reopen. Every time we visit, we notice another building demolished, while rows of the neighborhood’s classic housing stock are undergoing restoration. This amalgamation of cuisines, cultures and languages is unlikely to thrive after Kumkapı becomes the next quarter in line for “urban renewal.” Wedged directly between the old city and the Marmara coast and close to major public transit hubs, it’s a marvel that this process isn’t already in full swing.

A picture is worth a thousand words (roughly the length of this article), and as many photos would have difficulty conveying an average afternoon in Kumkapı. Which is why one must see to believe. Some of the places we featured may be closed by the time you arrive, but discovering new ones lurking around the corner is guaranteed.