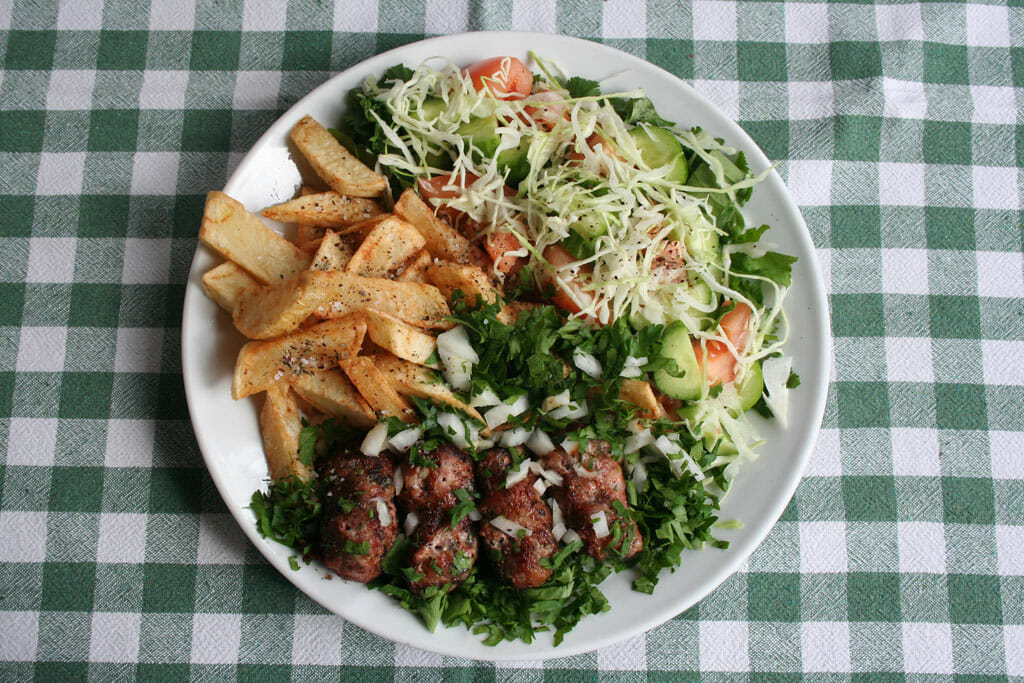 Berlin Wall No2: Hole in the Border

Berlin Wall No2 is a rickety wood and plastic-sheeting structure on the pavement right on the Greek-Cypriot side of the “Green Line,” as the border that divides the Cypriot capital is known. It’s overlooked by guards and is a five-minute stroll from the more stylish eateries in the center of Nicosia’s Old Town. But this little hole-in-the wall serves the best sheftalia we’ve eaten in the city.

You could argue about whether these wonderful little nuggets are a form of sausage – what the French would call crepinettes. Two cuts of pork – backfat and loin – are minced, mixed with onions, herbs and seasonings, then encased in caul fat – the membrane that surrounds a pig’s stomach – and grilled over charcoal. Whatever you call them, sheftalia are a purely Cypriot dish and, at their best, a perfect mix of juiciness, caramelization, intense meat flavor and bursts of freshness.

Costas Violaris, who took over Berlin Wall No2 in 1989 and named it for its location and the previous owner’s German wife, says there’s no secret recipe for perfect sheftalia. 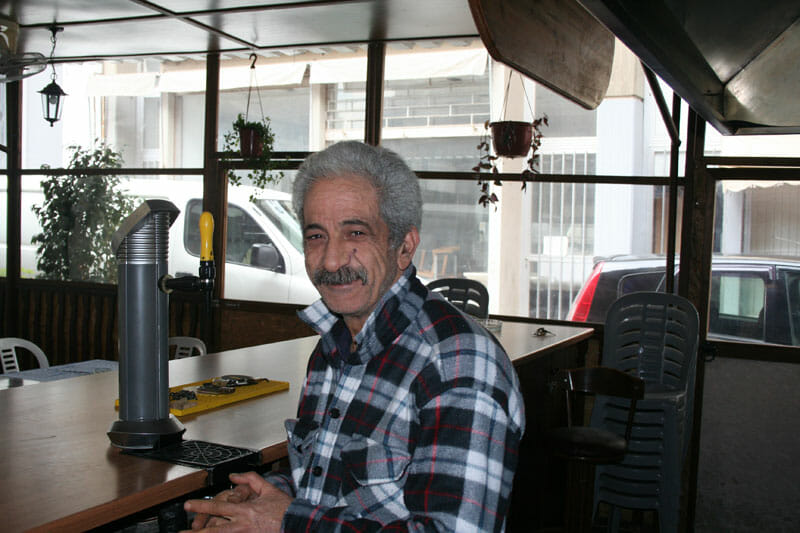 “They just have to be fresh, and they have to be cooked once, not pre-cooked then heated up,” he says.

Violaris has always had his sheftalia delivered fresh daily from a woman named Yiannoula – he doesn’t know her surname – who runs the greengrocers in Nicosia’s almost-deserted old Municipal Market. Her recipe is simple; the two cuts of pork, onions, fresh parsley, dried Cypriot oregano, a hint of cinnamon and salt and pepper.

While sheftalia is only found in Cyprus, its development – like most cuisine in the country – was probably influenced by its various Middle Eastern neighbors. In the Turkish-occupied northern third of the island, cafés and grill houses serve what is called şeftali (“peach” in Turkish), made from a similar recipe but using lamb mince and caul fat in place of pork.

On sunny summer days, Berlin Wall No2 is always buzzing and full of regulars enjoying sheftalia, grilled halloumi and cold beers. But on a quiet day in January Violaris still smiles, fires up a corner of the grill and gets to work, even though there are only a couple of customers braving the cold and drizzle.

While the sheftalia cook over the coals he sprinkles them liberally with a mixture of sea salt, pepper, dried oregano and sumac that he stores in an old yogurt pot. The result is delicious: the pork is seasoned and cooked to perfection, and the caul fat renders down to form a dark lacy casing. He serves the sheftalia with hand-cut French fries and salad or inside pitta.

Few tourists find Berlin Wall No2, Violaris says. Customers are mostly regulars who live in the city, including Greek-Cypriots, Turkish-Cypriots and foreigners. In the tiny indoor section of the cafe the walls are covered with thank-you notes from famous Greek-Cypriot singers. Violaris tells us that Cypriot Presidents Glafcos Clerides and Tassos Papadopoulos used to eat here when they would visit this section of the Green Line each year to wish the border guards a happy Christmas. 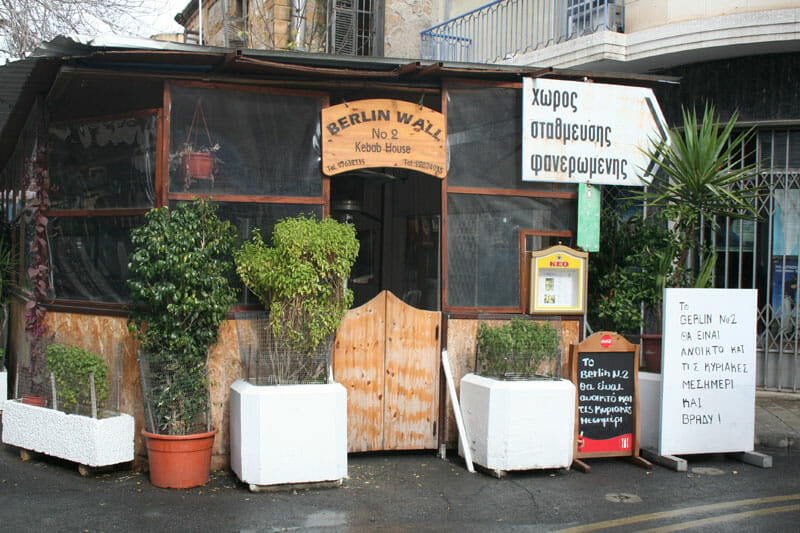 Violaris runs the lunchtime service with his daughter, Harita, and the evenings with his son, Christos. He’s been working since he was 13 and now, at 59, is planning to retire in five years.

“I’ll ask the children if they want to take over the business, and if they don’t want it I’ll sell,” he said.

We think that would be a great shame. 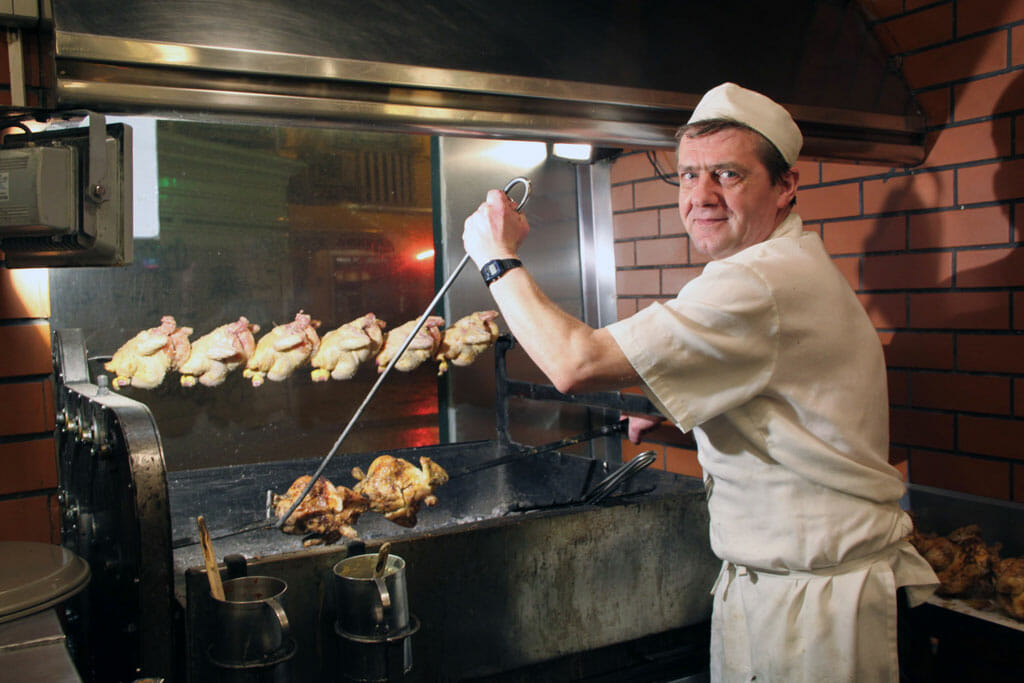 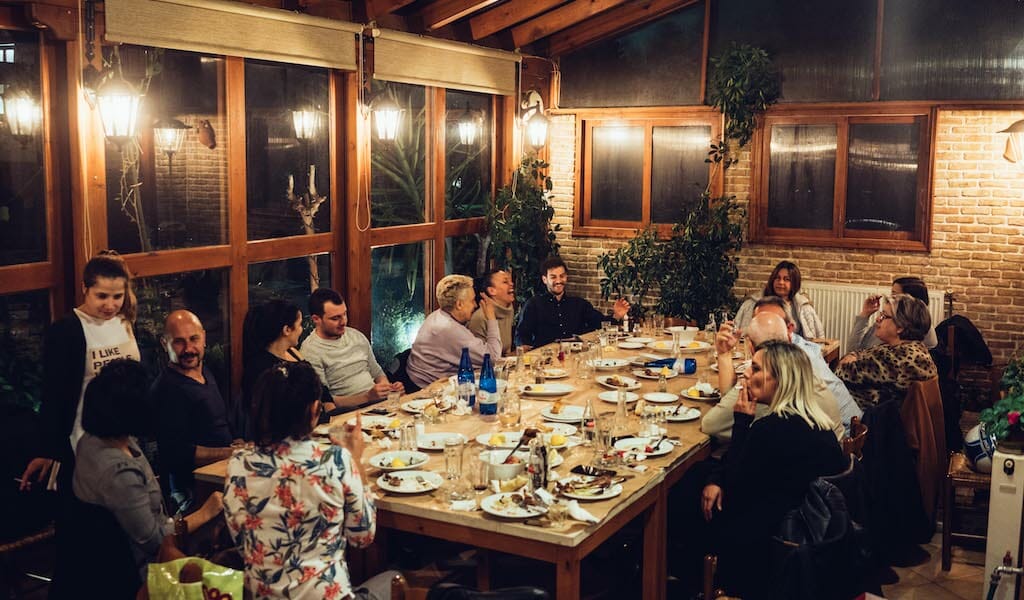