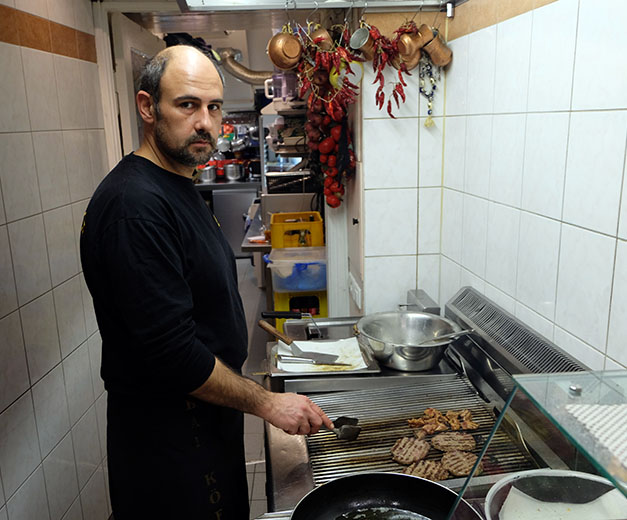 It might sounds sacrilegious, but when we’re in Berlin, döner isn’t our go-to street sandwich. Though it is widely believed that the German capital is the birthplace of the beloved sandwich, that fact alone does not provide citywide quality assurance.

The rapid ascension of the döner sandwich as the city’s eminent fast-food staple has unfortunately resulted in its mass production, which means one is likely to encounter a nondescript rotating wheel of frozen mystery meat. This isn’t to say that excellent yaprak döner (a carefully crafted cylinder consisting of freshly layered cuts) cannot be found in Berlin. But the way the sandwich is dressed in this city – with a variety of vegetables, sauces, cheese and fresh-squeezed lemon or lime – is indeed conducive to covering up the taste of boring meat.

When we’re craving a sandwich, we go with köfte. Turkey’s beloved meatball has made headway in Berlin, and there are a variety of establishments that make their köfte by hand, collectively forming a deep köfte scene in need of exploration. And explore we did. İzmir Köftecisi in Kottbusser Tor might win the award for the city’s best köfte sandwich, with its crusty, out-of-the-oven rolls coated with a heavenly herbed sauce. Gel Gör, open around the clock, serves up the “tecno,” which features fried slices of halloumi cheese, sauce galore and a sprinkling of arugula and onions that adds up to a perfect 4 a.m. nightcap, sure to soak up even the most punishing mix of Berliner Kindl and Jagermeister. Meraklı serves theirs with a dollop of pungent minced garlic, and the usual Berlin accoutrements of multiple sauces, veggies and spices.

However, after one bite at Bal Köfteci, we knew we had stumbled upon something truly exceptional. We knew at the first bite that the köfte – served İnegöl–style, as thin links or in a hamburger-shaped configuration – was made from the heart and with a finely crafted, potent spice blend. 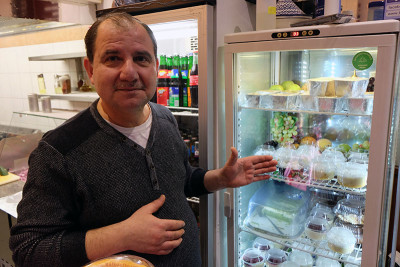 Owner Mehmet – a character who insisted that his last name is the same as his restaurant’s name, which can be roughly translated as “meatballs as pure as honey” – came to Berlin in 1974 at the age of 12 with his family from the kebab mecca of Adana. Mehmet, who places a high value on education, claims he learned German within six months of coming to Berlin. He was forced to join the workforce in lieu of pursuing a degree in mechanical engineering. He first worked at local markets selling fruits and vegetables, later spending 26 years working on the assembly line at an automotive factory.

“We’re people who love to make food, and place high importance on the palate. So we said, Why not?” Mehmet said, explaining his first venture into the restaurant business.

Bal Köfteci is located on Kottbusser Damm, a major street in Berlin that runs above a segment of the popular U8 underground line, linking the districts of Neukölln and Kreuzberg. A five-minute stroll south on the same side of the street puts one face-to-face with the excellent kumru served up by İzmirli Mustafa Usta, an Aegean coast favorite found nowhere else in the city. Turkish-owned businesses seem to make up at least every other storefront on much of Kottbusser Damm, and a bustling Turkish neighborhood market every Tuesday and Friday just a block up draws huge crowds from all over the city.

In the middle of our chat with Mehmet, a customer strolled in and curiously surveyed the menu, eventually asking if döner was served. One of Mehmet’s employees told her it was not, explaining that köfte was their specialty. The customer scurried away, evidently disappointed at the answer. 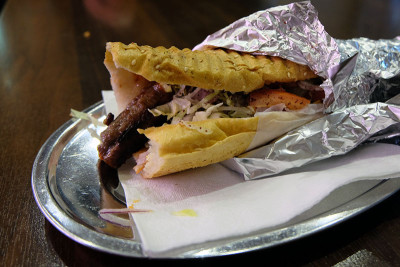 “Many people think that Turkish food is limited to döner,” said an employee, shaking his head. Bal Köfteci doesn’t limit its selection to sandwiches, instead offering a deli full of mezes made daily.

“People mainly opted for döner and pizza; köfte wasn’t as popular. But the popularity is increasing. The köfte that we make is homemade, and people prefer that to something preheated,” Mehmet said, indicating that the frozen döner sellers may have to step up their game.

“We prefer not use sauce, in order to present the taste of the köfte, with tomatoes, onions, parsley and sumac. That way you can truly appreciate its taste. Sauce is camouflage, used in order to cover something up.”

Mehmet said he imports his spices from Greece and declined to divulge his secret blend. And though we are advocates of sauce in many forms, ordering our sandwich the usta’s way was no mistake. The secret spice blend and homemade quality soared on their own, and we were confident that we had discovered Berlin’s best köfte, which can be enjoyed in a sandwich for under €3. A word to the wise shoppers of the nearby Turkish bazaar: Forgo the market stands and head slightly south to Bal Köfteci. 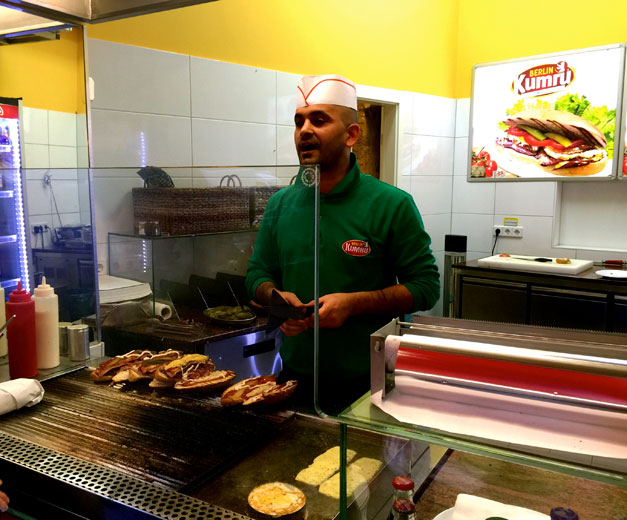 Berlin | By Paul Benjamin Osterlund
By Paul Benjamin Osterlund
Berlin The kumru sandwich – a specialty of Turkey's Aegean coastal resort district Çeşme – is one of our top guilty pleasures. It comes as heavy on the guilt as it does on the pleasure, with its sodium-laden, coma-inducing blend of grilled hot dog strips, salami slices and buttons of garlicky sucuk topped with… 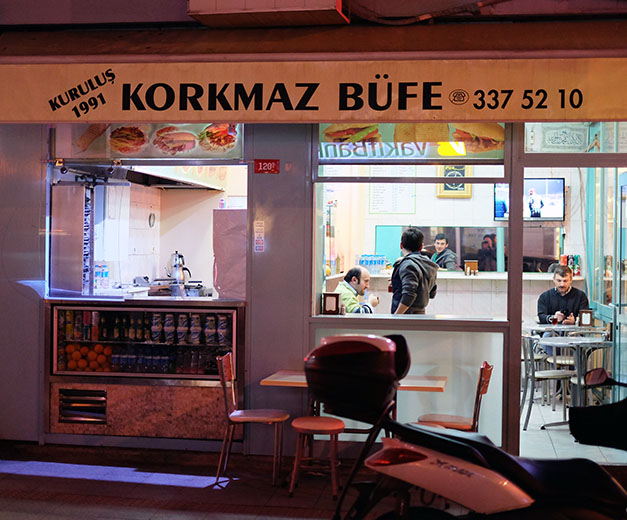 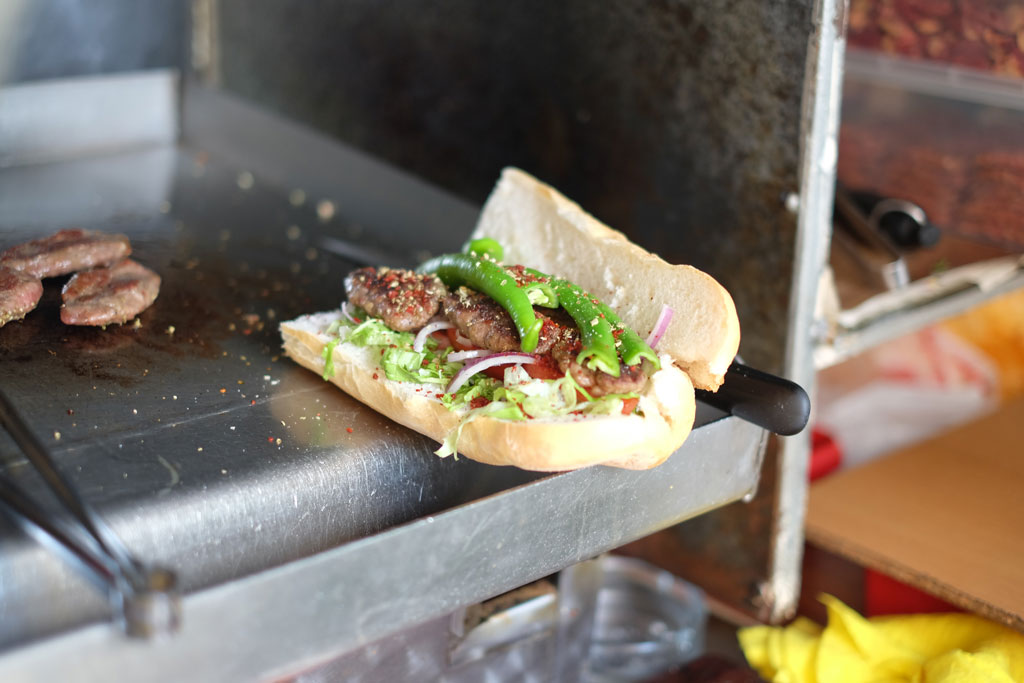 Let us introduce you to the street food masters of Istanbul!

Istanbul | By Paul Benjamin Osterlund
By Paul Benjamin Osterlund
Istanbul Editor’s note: We’re sad to report that Ferıköylü Ömer Usta’s stand is no longer in operation. The triangle of Kurtuluş, Feriköy and Bomonti represents an Istanbul on the verge of fading away. Though still inhabited by significant numbers of Greeks, Jews and Armenians, there are more local churches and synagogues than are used…