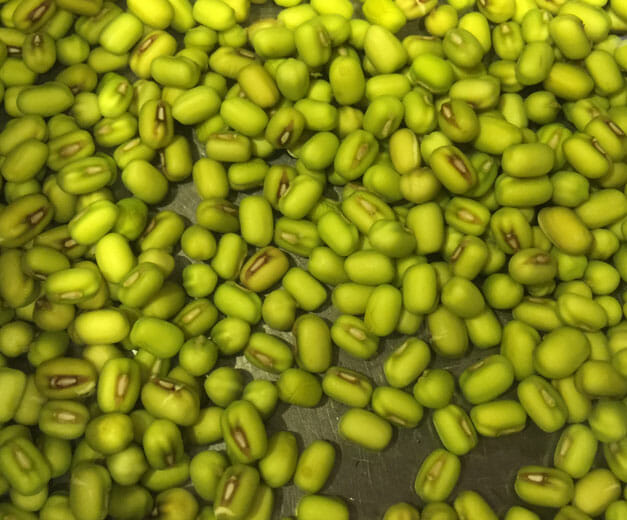 Diminutive, olive-colored mung beans (Vigna radiata) originated in India and entered the Chinese culinary canon thousands of years ago, eventually spreading throughout the rest of Asia, where they are now so common they’re rarely noticed. As underdogs, they have never been popular as a primary form of sustenance, although they are loaded with nutrients and are recognized for this by Indian Ayurvedic practices and Traditional Chinese Medicine. Most Chinese know to enjoy mung beans in summer to lower inner heat thanks to the legume’s natural cooling and antioxidant properties (red beans are eaten in winter for their warming heat qualities).

Sold dried as whole beans and split with or without skin (so that they appear yellow), mung beans (绿豆, lǜdòu) are also turned into a fine powdery starch, which can then be made into sheets and various noodle shapes. The paste goes by different names, with no reference to the actual bean. Líangpí (凉皮) is a translucent, wide, thick, slippery strip that is often found in hotpots and simmered dishes; liángfěn (凉粉) is a room-temperature, jelly-like, 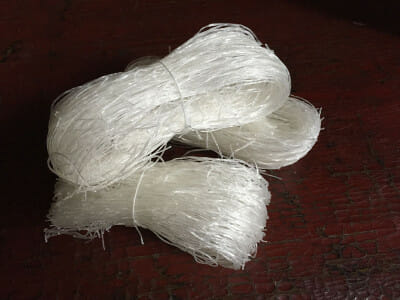 wobbly cake usually cut into strips and sauced with vinegar, chili and other seasonings; and fěnpí (粉皮), fěnsī (粉丝) and fěntiáo (粉条) are just a few of the many names for clear, thin cellophane or glass noodles. All of these look different from each other and have different uses, even though they are essentially the same thing. There is no generic word like “pasta” or “noodle” in Chinese to include all these things because to the Chinese, bean starch and grain flour are two entirely separate food categories.

Among Beijing xiǎochī (小吃) – “little eats” or snacks – made from mung beans, there’s dòuzhīr (豆汁儿), “bean juice,” a dingy-colored fermented beverage made from mung bean water which looks rather grim. An acquired taste for many (to put it euphemistically), it is strong-flavored, with a pungent stench that requires a sturdy palate. It’s said that only a real Beijinger truly loves to start his day with the traditional breakfast combo of this drink, served with the crisp, bracelet-sized fried cruller called jiāo quān (焦圈) and pickled roots. The residual bean pulp is made into a dish called mádòufu (麻豆腐): the gray mash is fried with fragrant additions, including leek, dried chili, pickled greens and fresh soybeans, with a generous dousing of golden rendered lamb fat. It’s one of the most delicious dishes unique to Beijing. Often, a vegetarian version is made with vegetable oil.

Most simply, whole or split mung beans are simmered until they start to fall apart. They can be sweetened and served as a drink or porridge. Mung bean flour, different from the starch, is the whole bean ground into a powder. It can be steamed to make cakes (also called green pea cakes), which are often filled with sweet red bean – that Asian dessert favorite, adzuki (enjoyed widely across East Asia, though it has a Japanese name). 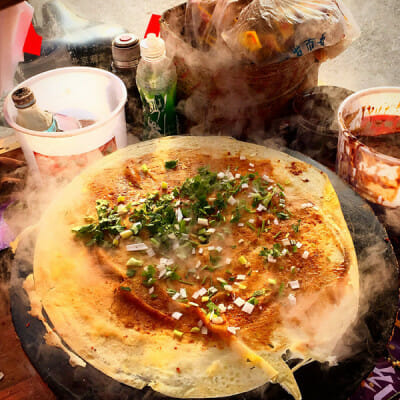 Peeled yellow mung beans are often sold as dried yellow peas, and their tiny oval shape should be an easy identifier. Soaked and ground, they are incorporated into many dishes, including rice porridge, but they are the main ingredient in the batter for the tremendous jiānbing (煎饼), one of Beijing’s most beloved street foods. The cook pours the batter onto a griddle and smoothes and spreads it out with a device similar to what the French use for crêpes. Before flipping the pancake onto the other side, the cook cracks an egg on top and smears it across. She paints on fermented bean, tofu and chili and sprinkles chopped leek and cilantro onto the crisp wafer, folds the whole thing neatly into a bundle and slips it into a plastic bag for easy snacking on the run.

Small and unassuming, the mung bean may not look like much, but within that homely exterior is one of China’s food superheroes. A master of disguise, a nutritional powerhouse, the mighty mung bean knows no bounds! 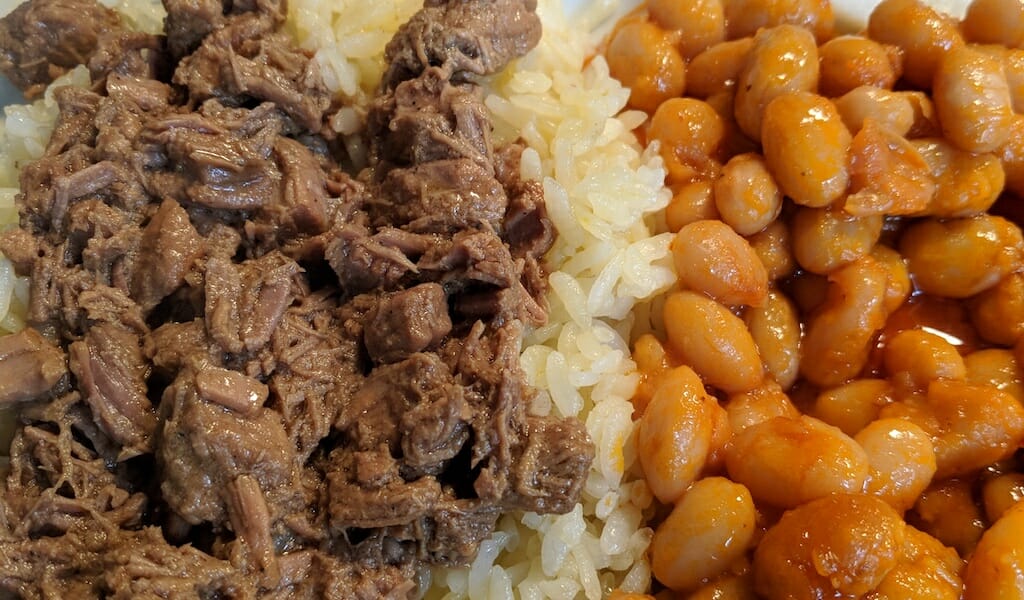 Mexico City | By Ben Herrera
By Ben Herrera
Mexico CityIn Mesoamerica, beans have been a pillar of culinary traditions – not to mention civilizations – from time immemorial. Pre-Columbian peoples depended on legumes as their primary source of protein, but they were more than mere sustenance. Beans (along with corn) were some of the most important crops for sale at the local markets because…