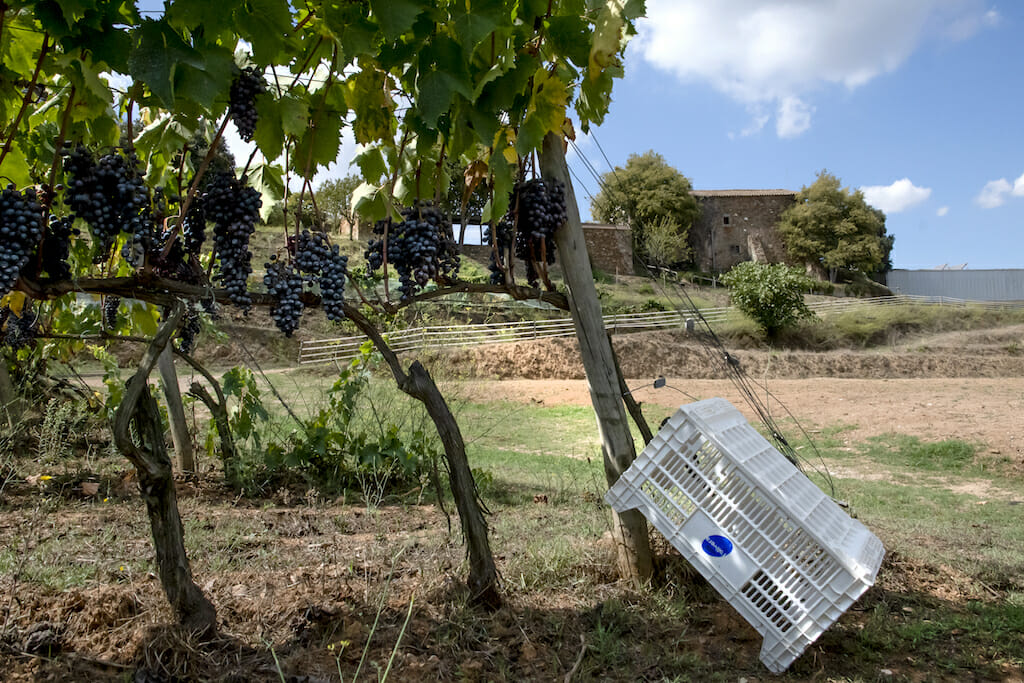 This may come as a surprise, even to locals, but Barcelona has its own “urban” vineyards and winery. Located inside an old masía (farmhouse) in Collserola Natural Park, a vast greenspace on the edge of Barcelona’s northwestern city limits, the winery – originally a project established by the Barcelona City Council – uses grenache and syrah grapes grown in those vineyards to produce an outstanding full-bodied blend.

But more than simply a winery, the project, known as Can Calopa-L’Olivera, is also an effort to provide city dwellers some important lessons about sustainability and the existence of alternative economies. At the same time, it allows agricultural life to make a healing return to the urban sphere, something Barcelona locals started thinking about more seriously during the Covid crisis. 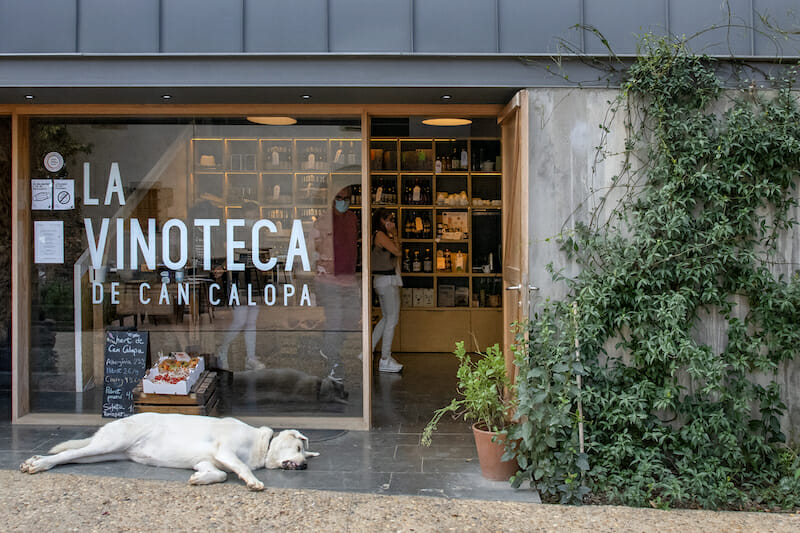 “Before the phylloxera pest arrived in this area in 1883, there were vineyards in all this land. During that time, there were already numerous old modernisme [Art Nouveau] cellars in the area, because there were so many vineyards,” says Maria Dolors Llonch, a retired engineer who is the director of Can Calopa, the masía that houses the winery. And it was not just wine that was being made in the outskirts. “Back in the day the peri-urban area produced a great part of the vegetables consumed in the city,” she says. “Today, this has changed. And we want to recover it back!”

One theory has suggested that the name Barcelona comes from the pre-Roman Iberian word Barkeno, which means “lands with many good vegetables.” What is sure is that, as Can Calopa’s Dolors points out, a bit more than a century ago abundant farms and vineyards surrounded the city, providing a large portion of its food. The amount of land within the Barcelona city limits used for agricultural purposes had dropped to 2% in the 21st century, down from the 15% seen around the 19th century. 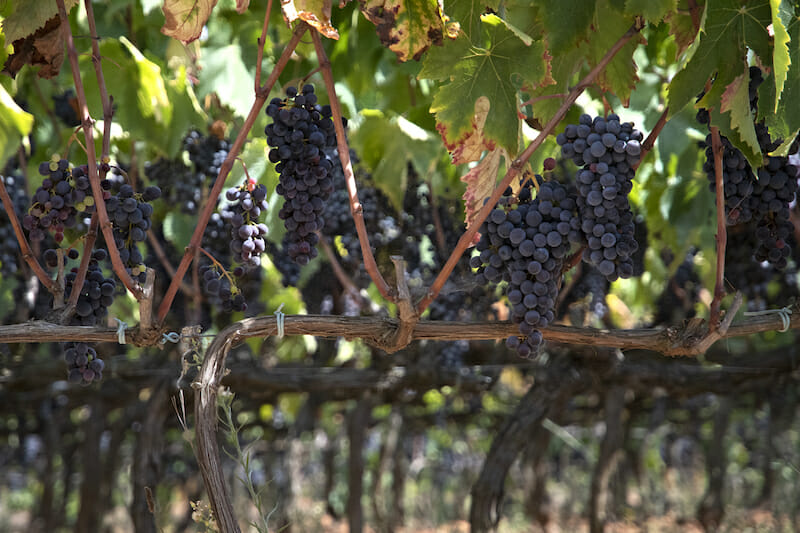 Hoping to give city residents a way to connect with Barcelona’s agricultural past, the City Council started the Can Calopa project in 2010. The masía that is the project’s home was not only one of the few still standing within the city limits but, more importantly, the only one that still had vineyards surrounding it.

Initially, Can Calopa turned out a small quantity of wine, which was mostly served as a kind of novelty at Council events and receptions. But in 2010, the Council decided to deepen the urban winery’s activities by enlisting the help of L’Olivera Cooperativa, a winemaker located in the village of Vallbona de les Monges, in Catalonia’s inland Lleida area. 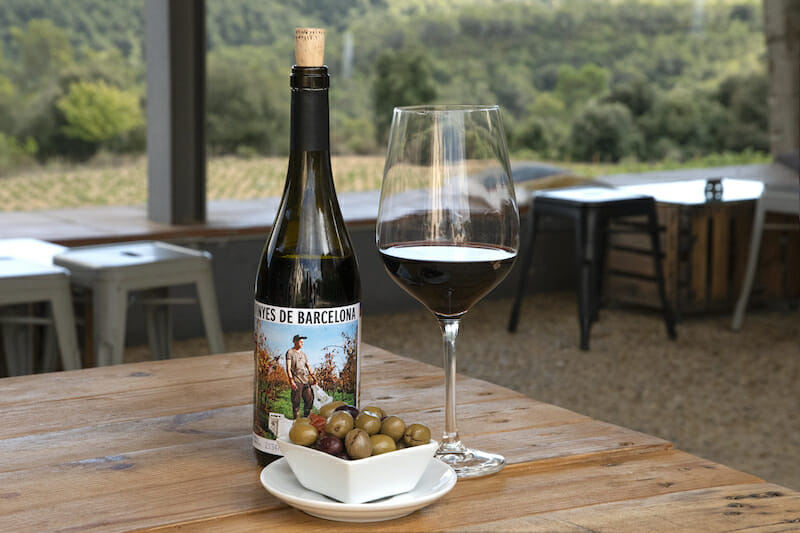 Like Can Calopa, L’Olivera is both an agricultural and social endeavor. Started in 1974 by a priest named Josep Maria Segura, the winery’s mission is to build a home and workplace for people with special needs, allowing them to develop a healing community through working the land (along with grapes, L’Olivera also grows olives). The project – which can house 16 residents and offer work to about 20 people – has resulted in the successful production of 11 still wines and two sparkling ones, and a variety of extra virgin olive oils, all being made using organic methods.

“The pandemic made people give more value to their contact with nature and to the closest natural park to the city, one that many people didn’t really know before. … They learned that here in their own city wine is produced, that we harvest olives.”

In Barcelona, the joint Can Calopa–L’Olivera project, is home to seven residents who also work in the vineyards, groves and fields around the farmhouse. Along with producing five different wines and an olive oil made from Arbequina olives, they also cultivate a unique local tomato variety called mandó, that was until recently only still being grown by one farmer. They are also reintroducing to the area a native grape called the pansa blanca (also known as xarel·lo), with which the winery plans to make a wine that’s emblematic of the Collserola’s terroir. 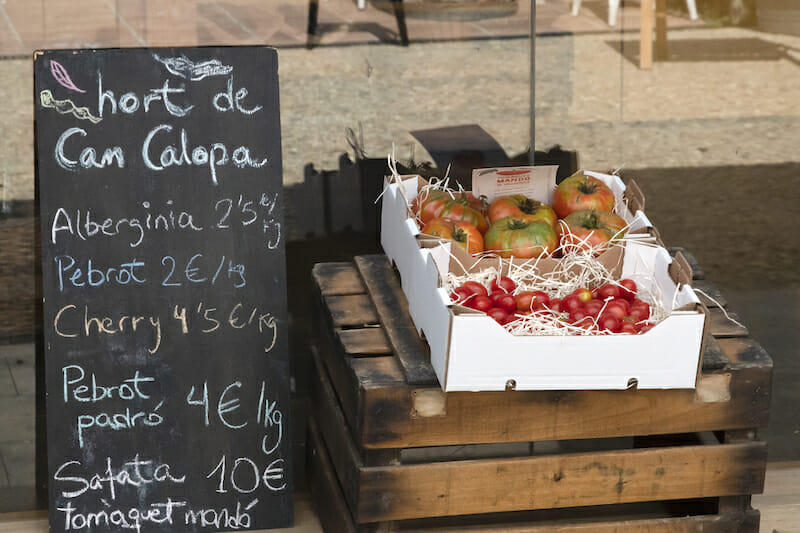 Despite Can Calopa-L’Olivera’s unique activities and collaborations with farmers associations and the Slow Food movement, the project has always struggled financially, Dolors says. “It’s amazing how much ignorance there is in Barcelona of the agricultural patrimony that we have in Collserola,” she says.

Ironically, that started to change during the past year-and-half’s various Covid lockdowns, as Barcelonans suddenly had the opportunity to get to know their city better. “The pandemic made people give more value to their contact with nature and to the closest natural park to the city, one that many people didn’t really know before,” Dolors says. “This worked in our favor, exposing the project to the many visitors who were forced to hike, bike or walk in the park inside the municipal perimeter during a time when the city was shut down. They learned that here in their own city wine is produced, that we harvest olives…they didn’t know that!” 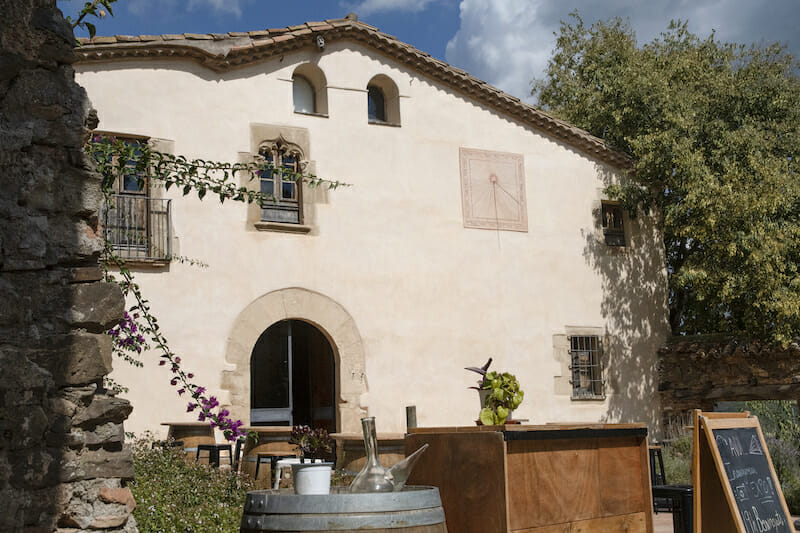 Thanks to this new attention, Can Calopa is initiating new projects – like hosting lectures on topics important of peri-urban farming through the Can Calopa Classroom – and playing a leading role in kicking off a dialogue with some of the main players in Barcelona’s hospitality industry. This conversation is on a variety of subjects related to the bigger question of how to strike the right balance between the city’s urban and rural elements.

Putting these higher-level discussions aside, the easiest way to engage with Can Calopa is to hike through the forest to the masía in Collserolla and buy a bottle in their wineshop – or enjoy a well-deserved glass of wine with some tapas on their beautiful terrace, which has a fantastic view over the vineyards and valley below. There is also a growing number of shops in Barcelona carrying Can Calopa-L’Olivera wine and olive oil, a list of which can be found here: https://olivera.org/es/donde-estamos/ 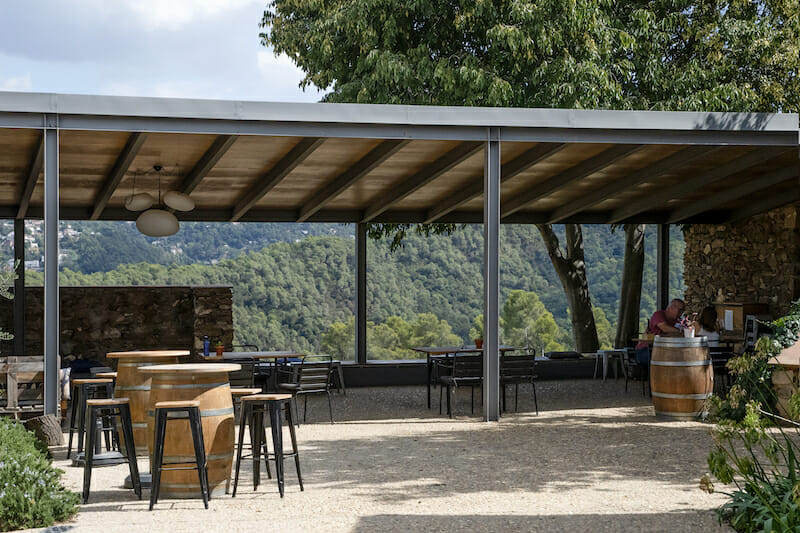 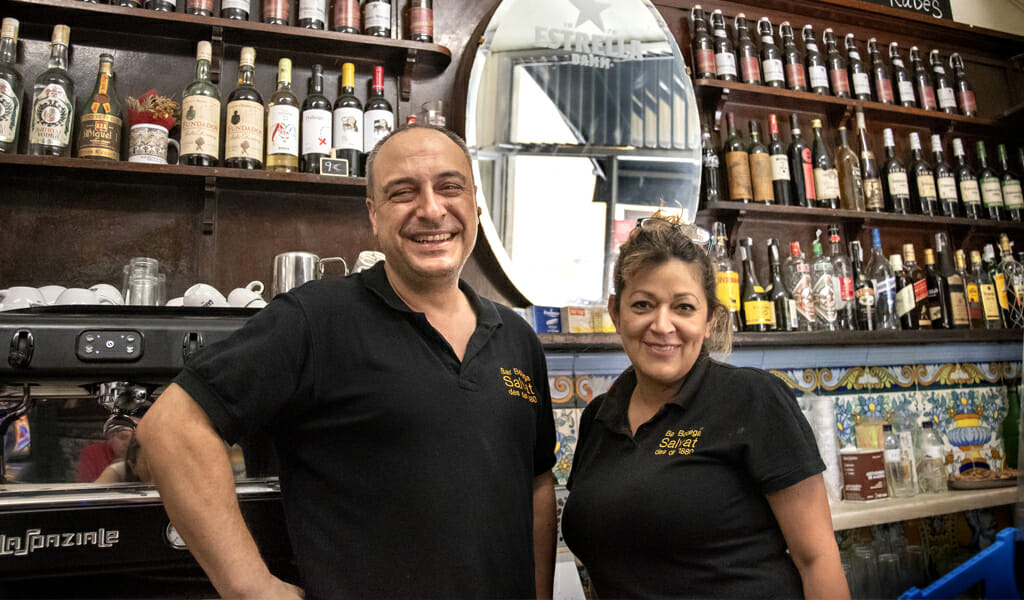 Barcelona | By Paula Mourenza
By Paula Mourenza
BarcelonaAt Bodega Salvat in the Sants neighborhood, large wooden wine barrels perched on high shelves almost touch the ceiling, looking down on those drinking below with more than 100 years of local history. For several generations of Sants residents, this old bodega, opened in 1880 by the Salvat Vidal family as a bulk wine store,… 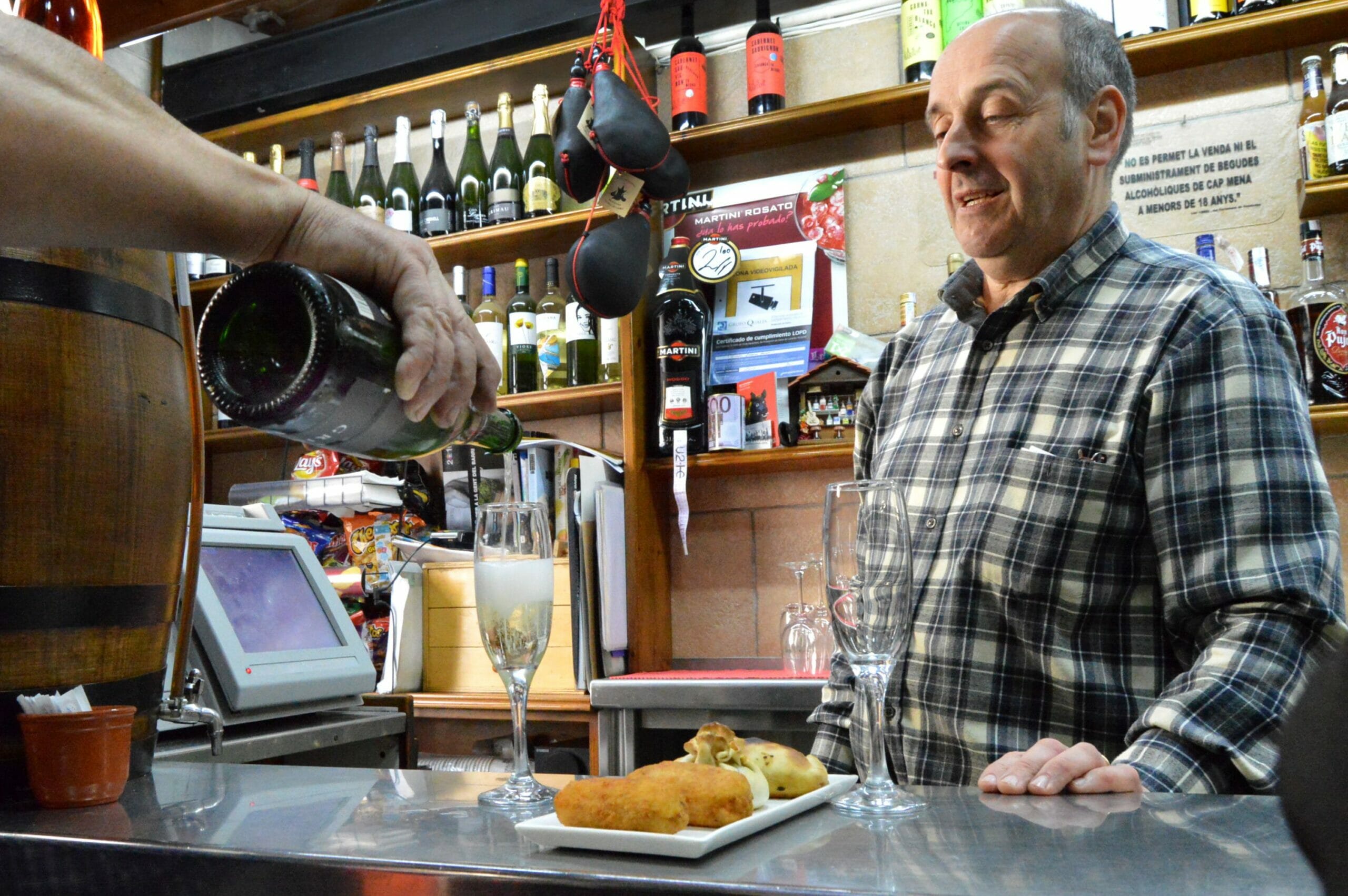