Editor’s note: This feature from Barcelona is the third installment in our series this week devoted to the top street foods in each of the Culinary Backstreets cities.

In Barcelona, a great deal of eating is done in the streets. Sidewalk cafés line the plazas and paseos, often to the point that it’s difficult to tell which tables belong to which establishment. Waiters dart back and forth through traffic in order to deliver trays full of copas y tapas to hungry customers, and many a summer evening is spent munching and sipping alfresco. Nonetheless, unlike New York City with its hot dog carts, the idea of “street food” that can be bought and then eaten while on the move has never really caught on in Barcelona – or, for that matter, anywhere else in Spain. Luckily for those of us who like streetside eating, however, there are some great portable food and drink items to be had, of which we recommend our favorites here.

1: Churros
These long, skinny treats are essentially choux pastry that has been fried golden brown and then dunked in sugar. You can find them at snack kiosks, cafés and churrerías throughout the city; often they are sold with a cup of thick hot chocolate for dipping. Traditionally, churros (and porros, which are larger and don’t have ridges) were the early-morning snack of working-class men as they headed off to the job at the crack of dawn. These days, it’s more common to come across a bunch of tipsy clubbers crunching on churros at 8 a.m. as an early-morning (late-night?) snack on their way home to bed. In any case, the pastries are delicious at any hour of the day or night. Our favorite churro joint in Barcelona is Churrería Layetana. This place is old-school, the floor littered with discarded paper napkins and the counter sticky with sugar and drips of chocolate. More often than not, there’s no space to sit at the tiny counter but when that happens, we’re always happy to take a greasy paper cone of churros to go.

2: Cold Treats
A number of cold, sweet indulgences make the perfect accompaniment to a stroll through Barcelona on a hot summer’s day. Granizados, drinks made with shaved ice and fruit juices (usually either lemon or orange) or coffee, are a bit like a cross between a snow cone and a slushy. Horchata is a summertime drink that originated in the region of Valencia; however, it is now beloved throughout all of Spain, and Barcelona is no exception. Made from tigernuts (chufas), water and sugar, the drink has a sweet, milky flavor that is surprisingly refreshing when served ice-cold. Another unusual cold drink is leche merengada, made with milk, sugar, cinnamon, lemon zest and egg whites that are beaten until stiff. The drink is thick, cold and frothy, a bit like a milkshake in terms of consistency and with a sweet, meringue-like flavor that comes from the beaten egg whites. Finally, while ice cream 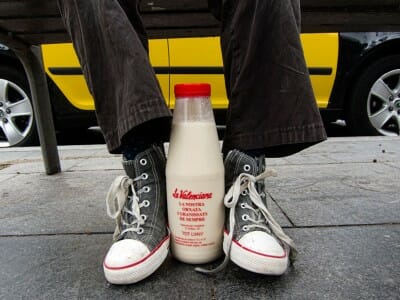 might sound ordinary, in Barcelona it comes in some unique flavors, such as turrón (a popular Spanish confection usually made with a base of honey and egg whites) and crema catalana, which tastes similar to caramel flan.

If you’re tempted by all of these options but not sure how to choose among them, head to any horchatería and you’re certain to find not only horchata but also ice cream and leche merengada. Our preferred venue is Horchatería La Valenciana. Founded in 1910, it’s the kind of place you can imagine your great-aunt taking you to and, indeed, much of the loyal clientele is made up of local women of a certain age who we suspect have had the same weekly hair appointment with the same hairdresser since 1965. As for us, we usually just order a liter of horchata to go and enjoy it on a nearby bench in the sun.

3: Bocadillos
We can’t talk about street food in Barcelona without mentioning the most basic of them all, the humble bocadillo (also known as a bocata or an entrepans). The recipe is simple and flexible: take two slices of crusty baguette and then stick something in the middle, usually ham, cheese or tortilla (potato omelet). Bocadillos can be found at just about any casual eatery, bar or café in the city, and although nearly all of them will serve for a perfectly adequate park bench 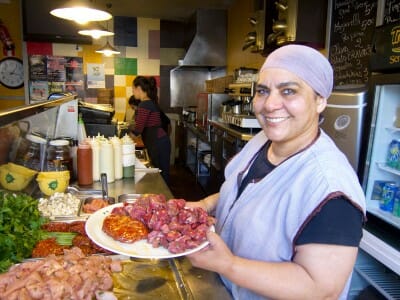 meal, for us, none can compare to the bocadillos at Bó de B. You’ll recognize this tiny sandwich joint tucked away in a little street near Barceloneta by the line of people standing outside the door.

The meat (chicken, beef or salmon) is grilled fresh for each order and while this makes for a longer wait, it’s definitely worth it. Choose from the seemingly endless variety of toppings, from lentils to feta cheese to guacamole, and they’ll pile more than you ever thought possible onto one scrumptious baguette. Of the sauce options, we highly recommend choosing ALL of them – trust us, the combination works very, very well. Aside from their amazing flavor, Bó de B’s bocadillos are also amazingly affordable, priced at just €3.50 or €4 per sandwich. There are a few tables to eat at but we always take our sandwiches to enjoy over on nearby Barceloneta beach.

4: Pastries
On a nice day in Barcelona, one of the things we like best is to bask in the sun in one of Gràcia’s charming plazas; the benches lining the sides of the squares are a perfect spot for an impromptu picnic. The best place we know for stocking up is A Casa Portuguesa, a small Portuguese bakery and café located conveniently close to both Plaza de la Virreina and Plaza del Diamant. The savory pastries at A Casa are the perfect picnic food: 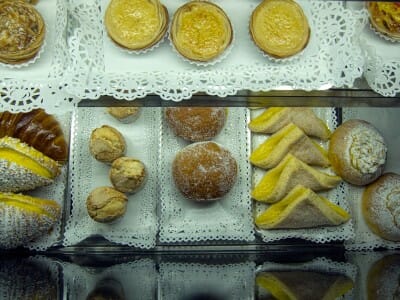 small enough to fit in your hand and no cutlery required. Behind the glass cases are a number of choices, our favorites being the beef and mushroom empanadas, the merendas (brioche filled with ham and cheese) and, best of all, the rissoles, small croquettes filled with cochinillo (suckling pig). Of course, any proper picnic needs good desserts, and A Casa definitely doesn’t disappoint in that regard. The most popular are the pasteles de Belém, crunchy puff pastries filled with egg custard and sprinkled on top with cinnamon. But we’re most fond of the Pan de Dios (“bread of God”), pillowy brioche rolls topped with custard and shaved coconut. 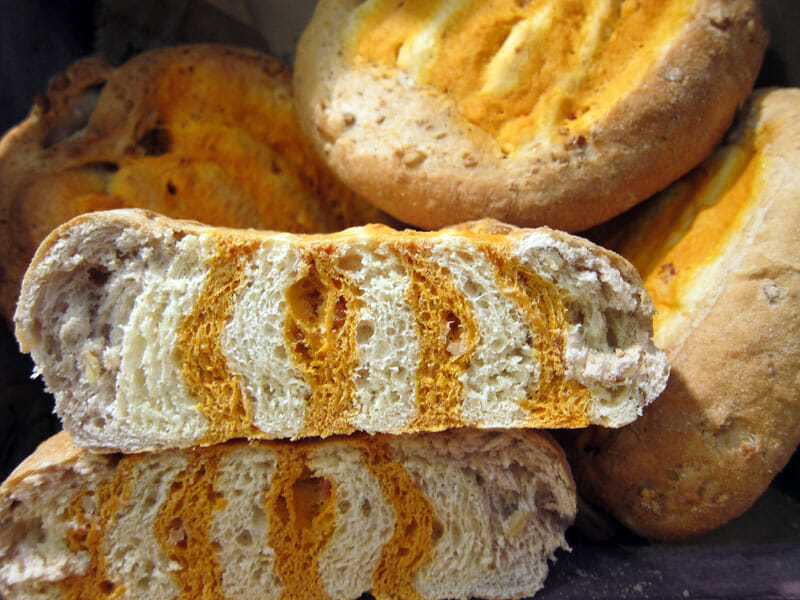 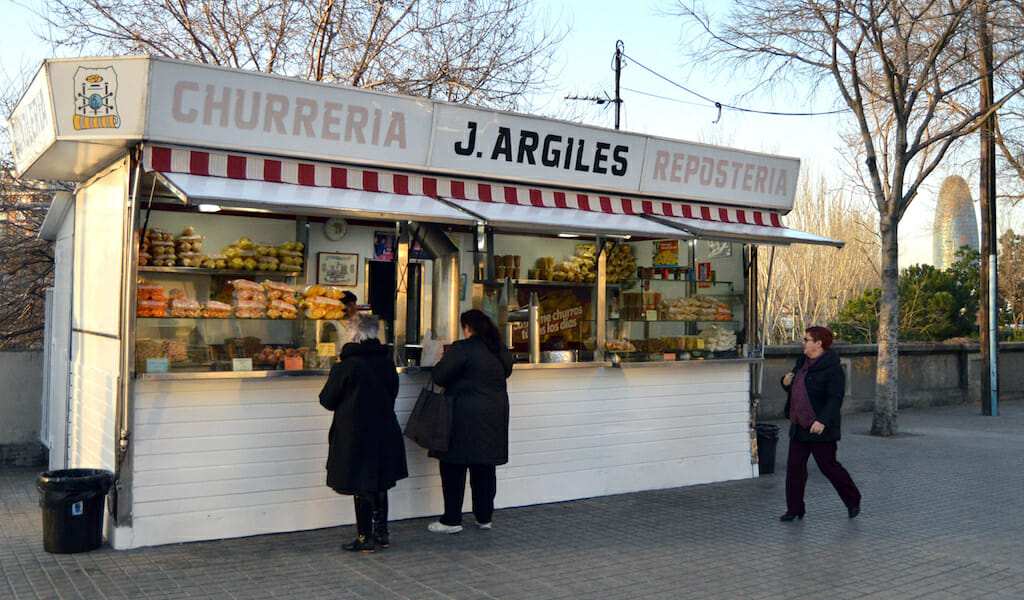 Barcelona | By Paula Mourenza
By Paula Mourenza
BarcelonaChurros, the long, skinny, crenellated, sweet fried crullers made from just flour, water and salt, have been enjoyed for centuries in Spain, with hot chocolate and without. However, in Barcelona, xurros, as they are called in Catalan, are becoming an endangered species. In recent years, more than half of the xurrerias in the city have…

Barcelona | By Paula Mourenza
By Paula Mourenza
BarcelonaIn Spain, preserving the rituals of Lent – historically a period of 40 days of prayer, penance and pious abstinence from eating meat that leads up to Easter – was up until the second half of the 20th century mostly the responsibility of priests. Nowadays, however, it is more often the country’s chefs who are…
Barcelona’s Top Street Foods