Each year at the end of May, more than 12,000 penyistes and 200,000 hungry visitors devour 12 tons of snails in one mere weekend in the city of Lleida, the capital of Catalonia’s interior. The Aplec del Caragol (“Snail Gathering”) is now an internationally known gastronomic event of impressive magnitude. Just under two hours inland from Barcelona by car and an hour by high-speed train, Lleida is an easy trip worth taking, especially in late spring, when friends and families gather to eat and drink with abandon. Typical foods prepared by the colles (gangs) of penyistes (participants) who register together and participate in the Aplec every year (sometimes for decades without fail) include paella, fideuà (a typical pasta preparation), grilled meats and sausages, stews and salads. However, the tender, tasty land snail is the main attraction.

“Of course the different snails have different flavors,” exclaimed Moroccan snail vendor Asis Ladmoa, when we asked him about the difference between the three types of snails he had heaped in mesh sacks on his table at the Saturday market. “The larger ones with the thicker shells have the strongest flavor. When you make a dish that requires a lot of stirring, you want the snails with the thickest shells so they don’t break,” Ladmoa said. “The thinner-shelled, lighter-colored snails are best for roasting a la llauna.” 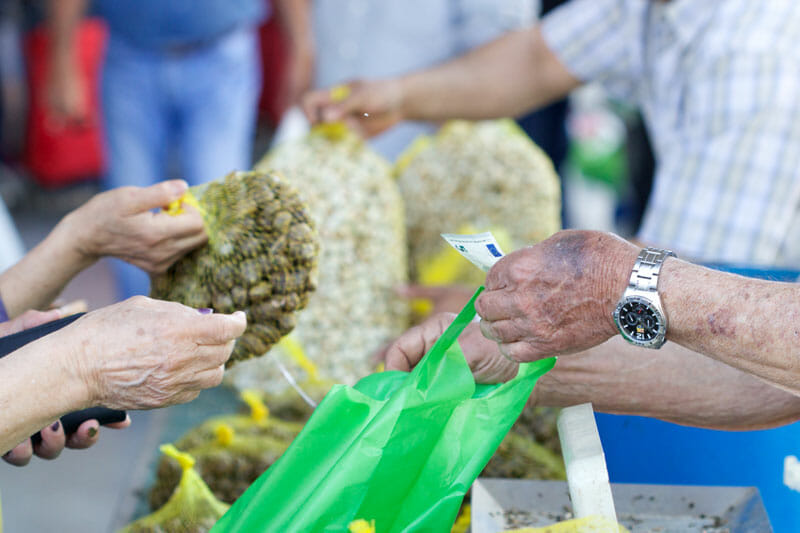 Translated loosely to “with a can,” a la llauna is one of the most popular ways to prepare snails throughout Catalonia. The llauna is actually a flat, shallow roasting tray of thin steel in which snails are arranged before the entire tray is set on a hot grill. The snails pop and hiss as they cook, becoming smoky, tender and succulent from their own natural juices. Seasoned with olive oil, salt and pepper while cooking, they’re finished with a simple vinaigrette of wine vinegar, olive oil, garlic and parsley.

All the pros know that only the boves variety of snails can be used for this method, as they don’t shrink when exposed to high heat, allowing easy eating with little more than a toothpick and one’s fingers. A dish of allioli is a required accompaniment, as the snails’ earthy flavor is elevated by the garlicky mayonnaise so beloved throughout Catalonia.

“Which are the best?” we asked Ladmoa, as he busily weighed out snails for a line of regular customers. “The small ones!” interjected an octogenarian waiting her turn for a sack of petite, pearly-white snails perched on the table. “They are my favorite too,” said Ladmoa with a smile. “They have the smoothest flavor.”

These small snails, known as caracolíns blanquillas, are only available in the summer months. The other varieties arrayed on his table are available year round. “These [caracolíns] you must cook simply in a clean, flavorful, spicy broth,” he advised. Ladmoa has lived in Lleida for 24 of his 40-odd years, and he still eats snails at least once per week. In fact, far from being a novelty for tourists and visitors, snails are an everyday ingredient in the Lleidatana kitchen.

While snails are eaten in myriad ways here, there are three staple preparations: Besides a la llauna, there’s stewed a la gormanta, with parsley and bacon and thickened with cornstarch, and stewed in samfaina, a classic Catalan tomato and vegetable sauce very similar to ratatouille. In addition to these three styles, we observed cooks tossing snails into almost anything, from hearty bean stews to rabbit paellas! 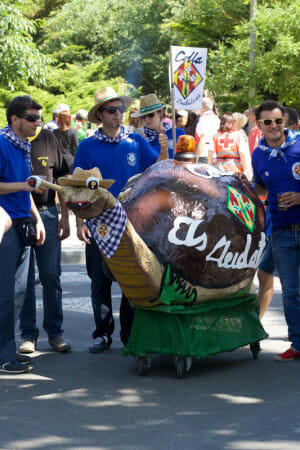 We admit that coming to Lleida for the Aplec del Caragol as an outsider is a bit confusing, given the slew of traditions, practices and protocols involved in this near-sacred yearly event. The first and most important thing to understand when participating in the festivities is that everyone eats, drinks and dances with only their friends and fellow colla members. In 2015, there were 101 of these “gangs” officially registered with FECOLL, the organizing body of this and several other cultural events in Lleida throughout the year. Each of these groups has a set plot of land on the city fairground, complete with little walls, gates, colorful flags, built-in bars, portable kitchens and toilets and matching T-shirts (the tribe’s “colors”). To eat, drink or even enter one of these zones, you must be a member of the clan or have been invited in by one.

However, before you pack your bags in defeat, note that the FECOLL’s “Visitor Pack” essentially helps foreigners and Catalan non-residents of Lleida feel like family and enjoy the feast.

This Visitor Pack (€44 if booking ahead, though more basic, lower-cost packages are also available) includes an official Aplec del Caragol straw hat, a penyista T-shirt, a traditional neckerchief, a tasting of snails and tapas at the festival’s restaurant pavilion, entry into three of the colles for drinks of your choosing, a three-course meal at the restaurant pavilion with many traditional dishes (including snails, of course) to choose from, a ticket to the sightseeing train that takes you through the medieval quarter of Lleida, free entry to all the monuments and points of historic interest in the city and the option to participate in the slew of contests that happen throughout the weekend.

The Aplec del Caragol dates back to 1980, when around 300 people, divided into 12 colles, gathered at the banks of the Segre River, which runs through the middle of Lleida, and held an improvised snail feast. It wasn’t long before this gastronomic showstopper became a much-anticipated event, and by the second year, there was already a parade incorporated into the weekend. Now, the energy level of this celebration has reached an all-time high. On Sunday morning, before the final midday meal of the festival, the 12,000 participants and friends of the 101 registered colles march with glee through the streets of Lleida, playing drums and horns while pushing giant snail floats and waving their colla’s flags proudly. You won’t miss it, as the noise can be heard clear across town.

Pol Prensas, a young Lleida local in his late 20s who held grill tongs in one hand and a plastic cup beer in the other, told us: “Our colla is called the Penya de l’Espardenya, and we are all from the neighborhood of La Bordeta.” An espardenya (espadrille in English) is a very common and traditional shoe in Catalonia. Prensas’s penyista shirt was a black-and-white striped smock, with the colla name and a drawing of a classic espardenya emblazoned across the chest.

“We are 75 people total this year,” Prensas told us. “And this same group has been participating every year for 35 years. We started just one year after the festival was founded,” he said proudly. He pointed out his father, a man in his 60s who was flipping a massive rack of pork ribs on a wood-fired grill, and his mother, sitting with friends at the front corner of the fence enclosing the colla’s plot. “Where are the snails?” we asked. 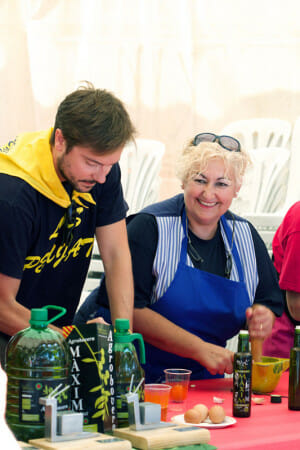 “You don’t eat snails at night,” said Prensas, shaking his head. It was 10 p.m. on Friday night and the party was just getting started. “The first night of the Aplec is always grilled meats,” Prensas continued. “It’s easier to cook grilled meat on the first night since there is less preparation involved, and we only eat snails at lunchtime, since they take more effort to digest.” (Note: This matter of digestion is the reason why paella is also only meant to be a midday meal. No true paella aficionado would ever dream of eating such a quantity of rice for dinner.)

In addition to happily passing time eating and drinking, revelers also watch or participate in the comical “contests” for which the Aplec has become known; these often silly, but entertaining, competitions include allioli making, long-distance snail spitting, hard-boiled egg eating and rapid Cava cork popping.

While not a large cosmopolitan cultural hub like Barcelona (with only one-sixth the population size and far less outside influence), Lleida’s identity as not only a city, but also as a region, is very prominent. As with so many cultures across the globe, gastronomic uniqueness here is yoked to local heritage. Certain dishes in a culture’s cuisine typically evoke more pride than the rest, and though everything we tasted over this indulgent weekend was utterly delectable, it goes without saying that the succulent yet humble snail is what brings the glory of Lleida out of its shell. 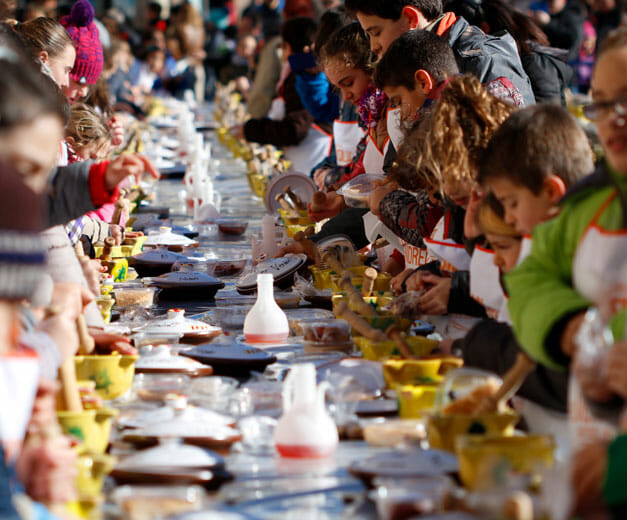