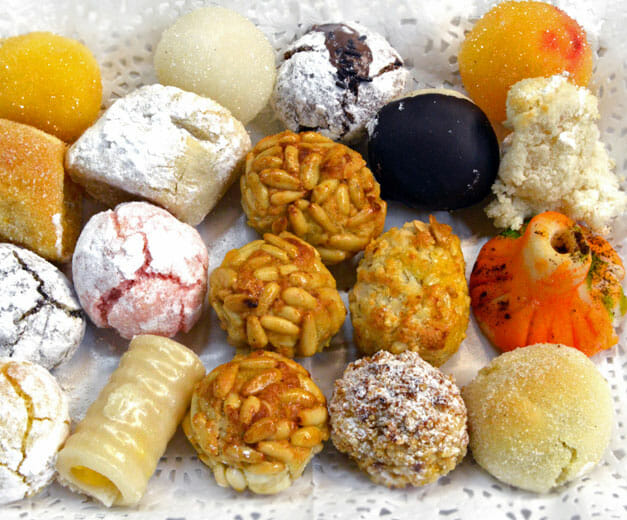 Panellets for All Saints’ Day: For Whom the Bell Sweetly Tolls

While Americans celebrate Halloween this week with M&Ms and Milk Duds, in Catalonia this time of the year is marked with a different, more sophisticated, kind of sweet. The small, round marzipan cookies called panellets are, along with roasted chestnuts and sweet wine, the traditional fare of All Saints’ Day, or Tots Sants in Catalan.

In traditional Catholic custom, families annually join together in the fall to pray and honor the dead, bringing candles and flowers to cemeteries and sharing meals at home. But the holiday is also closely connected with the joyful and ancient pagan celebration of the end of the harvest, marked by the festival called Castanyada. Throughout Spain and Portugal people gather in the countryside to eat roasted chestnuts (castanyes) and sometimes sweet potatoes and other seasonal foods, drink the first young wine of the year and enjoy the last warm weather before winter.

Spaniards have celebrated All Saints’ Day since the Middle Ages, when, in the 9th century, Pope Gregory IV officially established the holiday to commemorate all Christian saints and martyrs. At the time, bell ringers were tasked with ringing the church bells all night long in remembrance of the dead and to call people to pray. To fortify the bell ringers, those attending church brought with them humble foods – chestnuts, almonds, pine nuts, little sweets, cookies and moscatel or other sweet wine – which, once blessed by the priest, were shared by all. 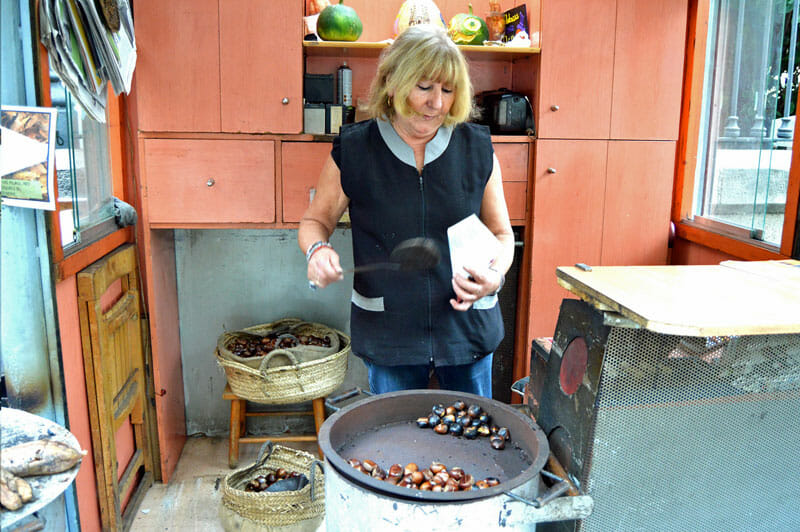 Over time, this custom evolved so that on the evening of October 31, the men of the village would collect chestnuts, sweet potatoes and some wood to make a fire, while the women would make little marzipan confections with pine nuts to bring to church or to eat at home. Children would hide a few chestnuts somewhere in the house and wait for the souls of the dead to come in the night to change them into panellets.

In the 18th century, panellets and roasted chestnuts moved from the country to the city, following on the heels of industrialization. In Barcelona, cafés, bakeries and associations would raffle off these foods, along with chickens and candied fruit, as a kind of marketing scheme. In the 19th century, Barcelona’s cafés and the city’s first confectioners began selling the cookies specifically for All Saints’, and not long after, locals started up what became a traditional panellet-crawl, strolling to the main cafés and sampling from each the pine nut-studded marzipan balls served forth from beautiful decorative trays.

Today, there remain a few castanyeras, or chestnut vendors, especially in the northern half of Spain. The castanyeras’ roasted nuts, cradled in newspaper cones, are always a welcome sign (and smell) of the arrival of autumn.

Panellets, however, have hit it big time. Patisserias and cafés all over the region offer the cookies from the beginning of October, but in the last week of the month they sell nearly a million kilos of them. Modern panellets have become quite sophisticated, with flavors like rose, coffee, lemon, chocolate or coconut and three grades of marzipan (fine, half-fine or rough). Though they traditionally come shaped in little spheres, some bakeries fashion them into mushrooms or pumpkins or the cylindrical huesos de santo (“saint’s bones”). Whatever form they take, to be called authentic, according to the European Union’s Traditional Specialties Guaranteed (ETG) guidelines, panellets must be made from only egg whites, sugar and ground marcona almonds and baked until they’re softly crunchy on the outside, with a tender, fragrant filling. To cut costs, some bakers replace most of the almonds with apples, potatoes or sweet potatoes, which, along with preservatives or artificial coloring, are not allowed by the ETG. (You can also tell that cookies made with these ingredients are just not as good as the real thing.) 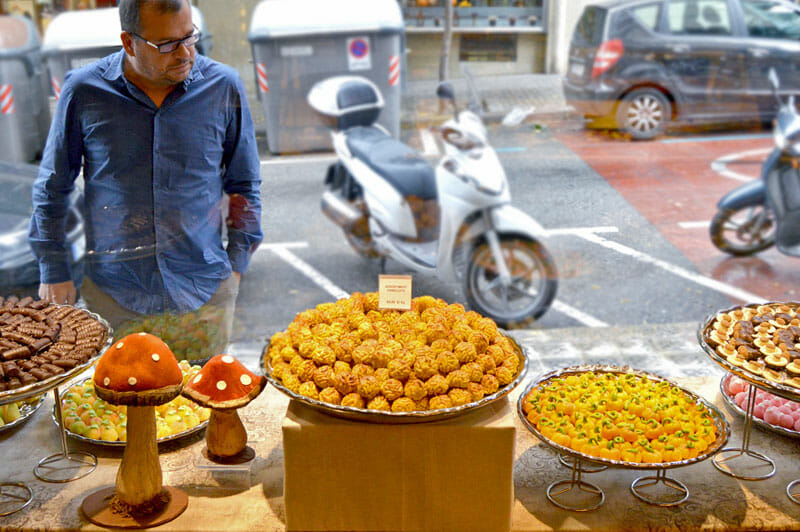 About 30 Barcelona bakeries are certified as makers of authentic panellets, including the famous Mauri and Foix de Sarrià, the excellent Baixas, the wonderful and very old La Colmena in Gràcia and Barrio Gótico, and other traditional patisserias such as Abril in Sants, Baylina in Eixample or Lis in Raval. At the Gràcia location of La Colmena, which opened in 1835, Francesc Font Mestre, the great-grandson of the bakery’s founder, Pepet Roig, makes 17 kinds of panellets. Baixas, founded by Francesc Baixas and Consita Melich in the neighborhood of Sant Gervasi in 1958, is renowned for its confections and catering, but we love them most for the wonderful traditional sweets they sell at their shop on Muntaner.

And if you’re not able to make it to one of these bakeries this week, you can always get into the holiday spirit by hiding a few chestnuts somewhere.

This feature was originally published on October 31, 2013.

Add to favorites
Panellets for All Saints’ Day