The presence of bread on the Greek Christmas table is rich with significance: It symbolizes hope for prosperity, an abundant harvest year and good health. The tradition of baking bread for a festive occasion, as well as its many symbolic meanings, can be traced back to ancient times, when many great Mediterranean civilizations associated the cycle of human life with the full life cycle of wheat. It was a belief that embedded deeply in Greek folk culture and has survived over the centuries, ultimately coming to occupy an important place in Christianity.

Christopsomo (Christ’s Bread) is a type of traditional Christmas bread prepared all across Greece. The bread itself and the ceremonial nature of preparing it symbolize the prosperity of the household. It is typically made on Christmas Eve, but in several parts of Greece it’s also prepared for New Year’s Day and the Epiphany (January 6).

There are many variations of this recipe in the different regions of Greece. The bread is usually large in size and round, sometimes elaborately decorated, but most commonly covered in sesame seeds and decorated with a big cross that has a shelled walnut at its center – a symbol of fertility. 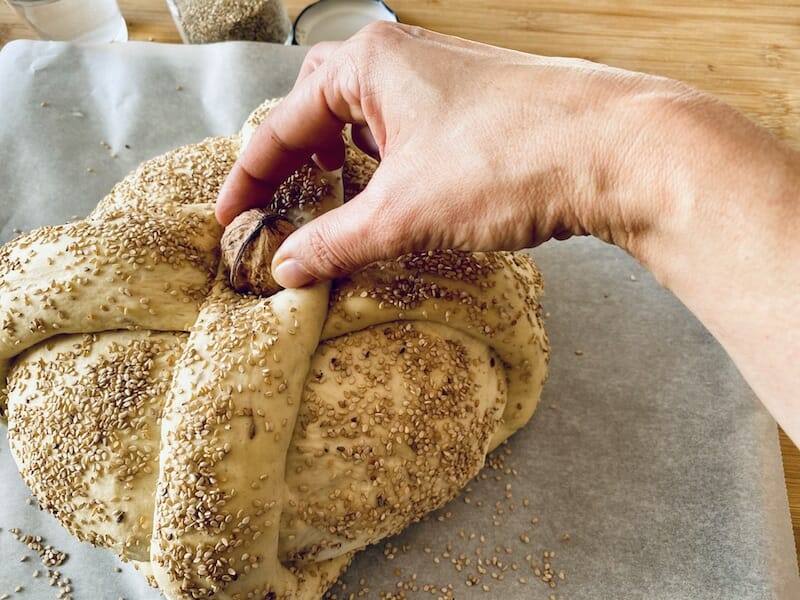 In several parts of Greece, including Crete, the ornate decoration, made of detailed sculpted dough, is very important, as it pays tribute to divine power and the cycle of life. In the mountain village of Anogia in Crete, the typical Christmas bread decorations always included snakes, as they were a symbol (derived from ancient Greece) of a household’s good luck.

In many parts of Greece the ornate decorations relate to agriculture. In fact, the bread took on an almost magical meaning in some agricultural families and households, who believed that it had the power to affect the future. The decorations on their Christopsomo would tell a story and often included symbols such as ears of wheat, a plough, a scale, lambs, oxen, goats or even a shepherd. In northern Greece, it was customary to bake Christopsoma specifically in honor of shepherds. The bread was decorated with a shepherd and his dog, both made of dough, while chickpeas placed next to him would stand for lambs and raisins for goats.

Christopsoma are often also decorated with flowers and branches. On the island of Lefkada they decorate the bread with daisies made of almonds. Other versions are braided and in the shape of a cross, like in Sparta, where the cross-shaped bread is beautifully decorated with shelled almonds and walnuts. In other cases the bread is decorated with Christ’s initial (“X” for Greeks).

Another variation of Christopsomo is sykotourta (literally “fig cake”), a tradition from the Greek province of Macedonia. Sykotourta is a sourdough bread made with olive oil, flour, water and salt, sweetened with black raisins and chopped dried figs. It is decorated on top with a symbolic cross, which is said to bring good luck, happiness and blessings.

Kouloura, something between a cake and a loaf of bread that is usually made with 15 ingredients including aromatic spices like cinnamon, clove and anise, olive oil, red wine, raisins, pine nuts, walnuts, orange juice and mandarin zest, is another take on Christ’s Bread. The island of Zakynthos and Sparta, a town on the Peloponnese, are particularly famous for their kouloura.

On Zakynthos, a kouloura is baked on important Christian holidays and sometimes even for weddings. A silver or gold coin called an evrema (ηύρεμα, “finding”) is hidden inside the bread, which is elaborately decorated with the same dough. On Christmas Eve, the old tradition calls for a family to gather around a table with kouloura and red wine at its center. Before commencing a simple meal of lemony broccoli soup served along with olives and onions (fasting is required to receive communion at church the following morning), the eldest male member of the family takes the platter with the bread and the rest of the family put their hands around the platter. Altogether they pass it over the fire in the fireplace, cross it three times and pour a mix of olive oil and wine on top of it while singing religious psalms. A member of the family then grabs a gun and shoots out the window to announce and celebrate the birth of Jesus. Finally, the bread is returned to the table where the eldest member of the family slices the loaf. The first piece goes to Jesus, and the rest are handed out to the waiting family members, with each one hoping they will be the lucky one to find the coin.

The recipe I am sharing is a simple Christopsomo – a large, round loaf topped with a big dough cross, a shelled walnut and sesame seeds, no complicated or elaborate decorations in sight. This is the version that you most often see in bakeries in Athens.

To honor its symbolic importance, high-quality ingredients are used for this particular bread such as honey, rosewater, nuts, sesame and aromatic spices such as cinnamon, clove, nutmeg, anise seeds and cumin. I put anise seeds in the bread mix for extra sweetness and aroma, while the hints of cinnamon, clove and nutmeg add an extra festive flair!

Mix the two flours in a large bowl. With your hands shred the yeast (if using fresh yeast or sourdough starter) and add it to the flour mix. Add in the cinnamon, clove, nutmeg, anise seeds and sugar, and mix. Make a well in the center. Gradually pour in the water and salt as you mix with your hands. Knead for about 10-15 minutes. Cover with a clean towel and allow to rest and rise for 1-1.5 hours. 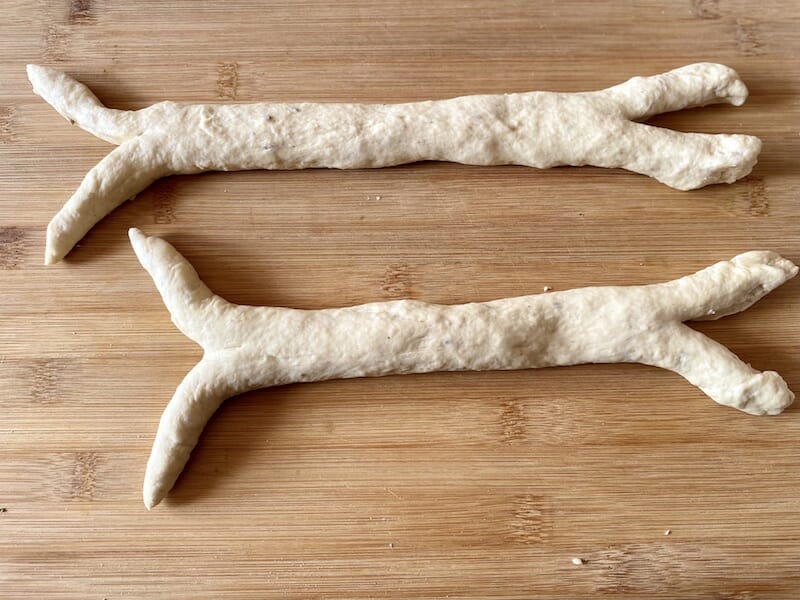 Uncover and knead again to release the air. Cut 260 gr from the dough and set aside. Line a baking tray with parchment paper. With the rest of the dough shape a round loaf and place on the parchment paper. Divide the remaining 260 gr of dough into two equal pieces of 130 gr. Roll them into two long ropes of equal length and then cut their ends with a knife (see the above photo). Spray the loaf with water and place the two long ropes crosswise, attaching the end pieces of each rope at the bottom of the loaf. Spray again with water and sprinkle with sesame seeds. Allow the loaf to rise once more for 45 minutes. Place the walnut in the center and let rise again for another 45-60 minutes.

Preheat oven to 230 degrees C. Spray the bread with water to create a crispy crust. Alternatively you can spray it with sugar water for a sweeter and glossier result. Place bread on the lowest rack and bake for 20 minutes at 230 degrees C. Bring the heat down to 200 degrees C and bake for another 25-30 minutes. Remove from the oven and allow it to cool down on a clean towel or a rack. 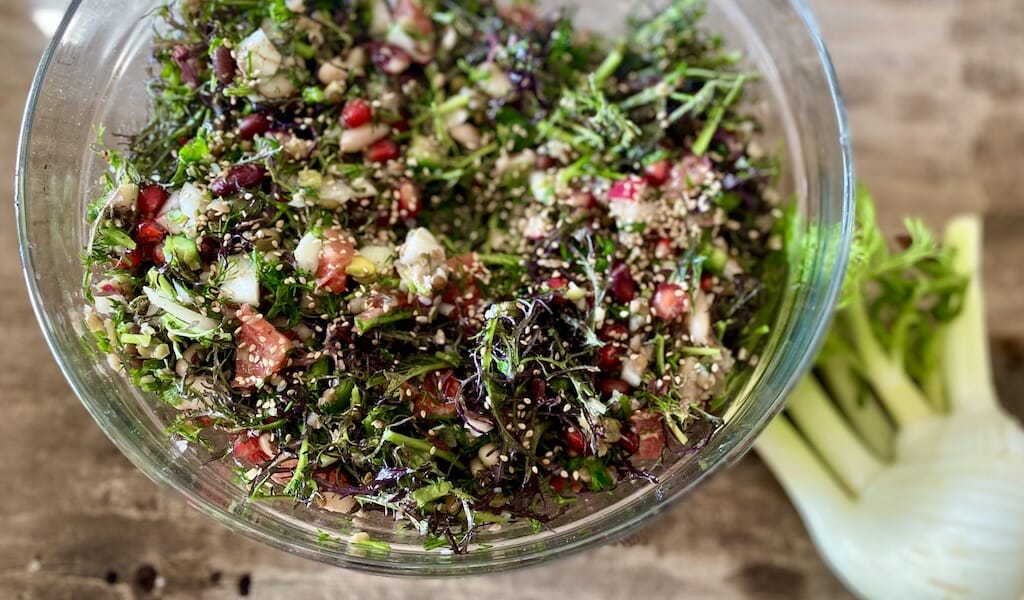 Athens | By Carolina Doriti
By Carolina Doriti
AthensIn Greece, Epiphany is celebrated on January 6 (some eastern Orthodox churches celebrate it on January 19). To say it’s significant is an understatement: For eastern Christians like the Greeks, the day commemorates the baptism of Jesus in the River Jordan by John the Baptist, seen as his manifestation as the son of God. For… 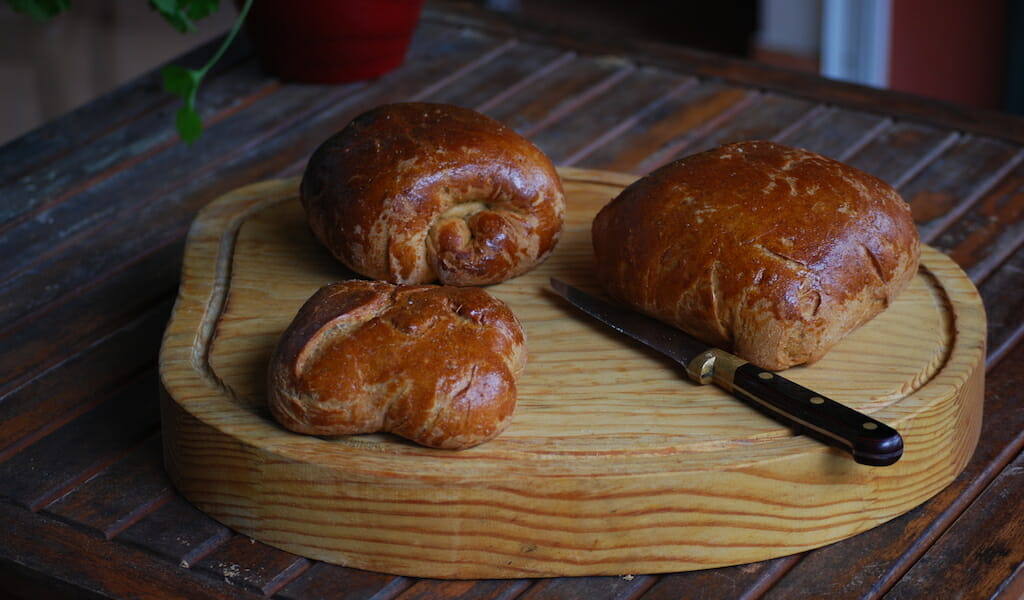