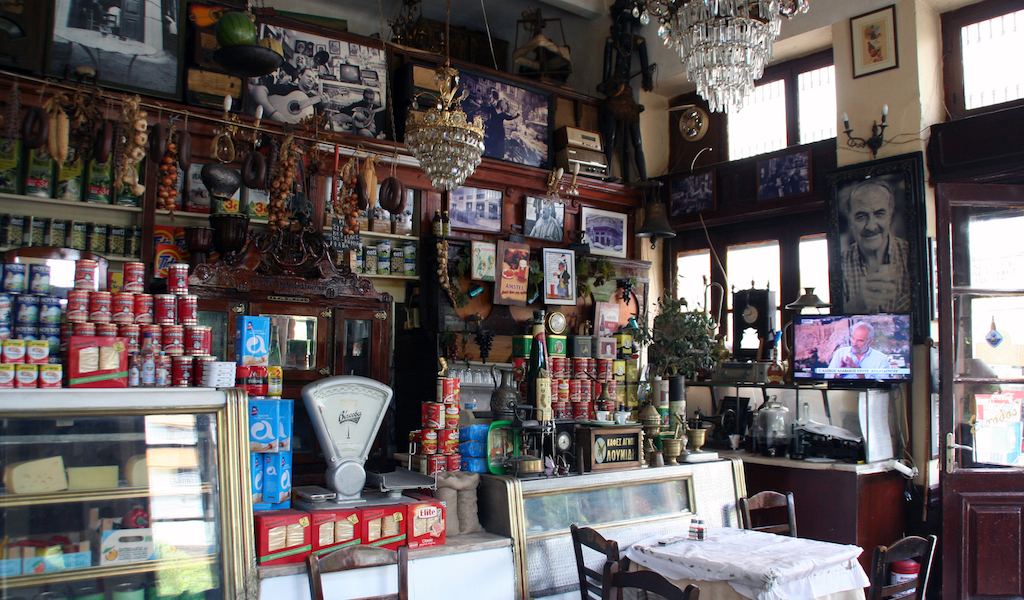 At the corner of Psaron and Salaminos streets, in a quiet neighborhood of Piraeus, there’s a place that looks straight out of a 1960s Greek black-and-white movie. Its name, eidikon, means “special,” and it’s the last of its kind: a bakalotaverna, or grocery store and eatery, all in one.

The shop opened in 1920, when the three Papakonstantinou brothers from Gardiki, an impoverished village near Trikala in central Greece, came to Athens in search of better prospects. The building was the tallest in the area. It had large windows, and in good weather, one could even see the sea on the horizon.

“Men would come here after work to have a some cheese, olives, sardines, corned beef – mainly canned goods – and to savor the excellent house retsina,” says Aristides, the son of the current owner. “There was no kitchen back then.” 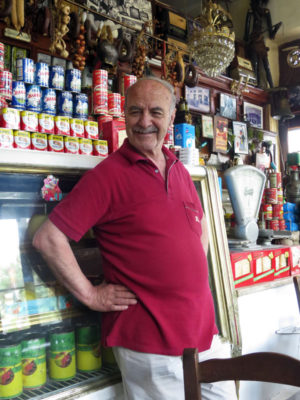 The interior, with its dark wooden paneling, was obviously built to last. The shelves and old refrigerator cases are now covered with vintage 60s products, bric-a-brac and numerous photographs of the current owner, Apostolos Papakonstantinou, and his forebears. Large frames display the good times of the past, with the celebrities that were (and still are) among the loyal clientele.

On Saturday evenings, there is live music, and the place stays open later, but if you’re lucky, you might witness one of the spontaneous parties where everyone joins in, eating, drinking and making merry. Eidikon is still known for those parties, and despite the financial crisis, it is still able to close on Sundays and for a month and a half in summer. “We need quality of life,” says Aristides. His father agrees, and points out, “There’s no outside seating, and it gets hot during the summer”.

On a recent visit, Apostolos – everyone knows him by his first name – a soft-spoken man with piercing eyes, brought us a jug of his retsina wine and a few of the dishes they make fresh daily: fried calf’s liver, meatballs, tomato salad (with three types of olives), a firm DOP cheese from Amfilochia and “the cake,” fries topped with four eggs sunny-side up. The rest of the menu continues in the same vein: soutzouki (spicy salami/sausage) either fried or raw, feta cheese, fava (split pea puree) and omelettes. The one made with corned beef is a customer favorite. 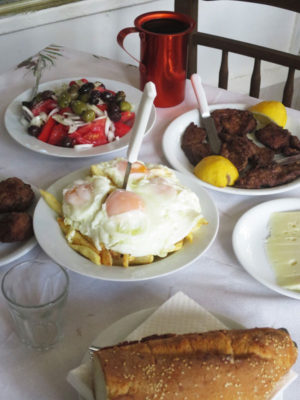 The meatballs were fluffy and had a hint of mint and garlic, the potatoes were expertly fried in olive oil, and the liver was soft and delicate. We were pleasantly surprised by the retsina; the home-made variety tend to be oxidized and not very good, but this one was still fresh, with just a hint of resin. “We have been making our own wine on the premises for three generations now. Our grapes come from Mesogeia” – an area near the Athens airport, famous for savatiano grapes – “and the wine is then fermented in large barrels in the basement. They are over 100 years old. Nowadays we use very little resin, as clients prefer a lighter taste.” Besides wine, there’s also beer, ouzo and tsipouro.

Our meal ended with humble tahini halva – a true Greek grocery store staple – on the house. This type of halva is known as tou bakali (grocer’s halva), because it was always bought from the store and never made at home. Another welcome throwback is the prices, which are happily stuck in the 1980s. 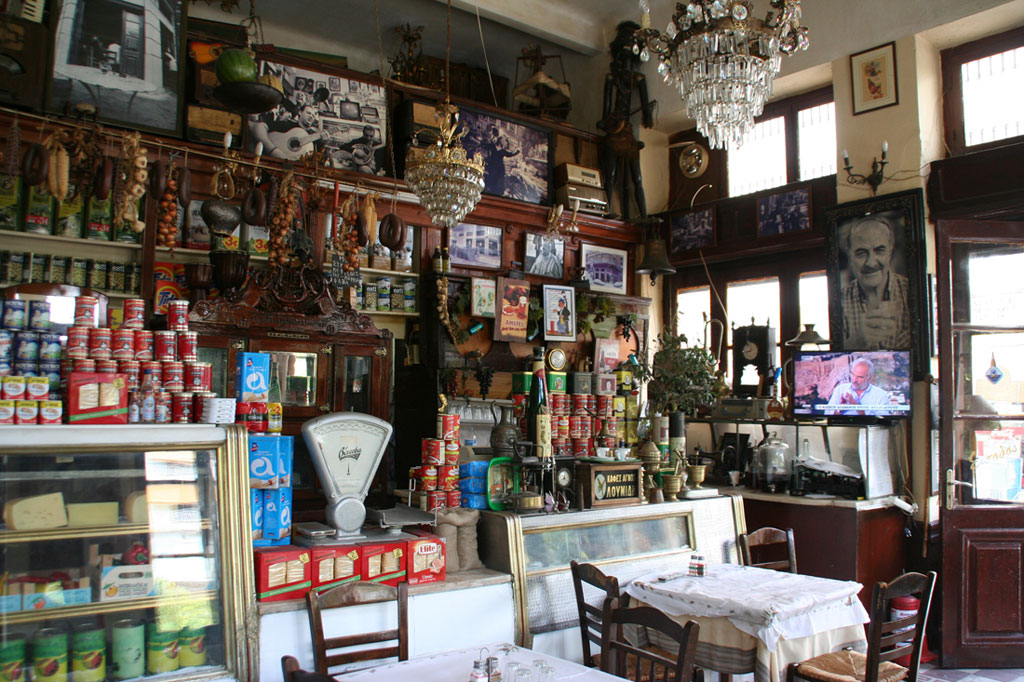 Athens | By Johanna Dimopoulos
By Johanna Dimopoulos
AthensAt the corner of Psaron and Salaminos streets, in a quiet neighborhood of Piraeus, there’s a place that looks straight out of a 1960s Greek black-and-white movie. Its name, eidikon, means “special,” and it’s the last of its kind: a bakalotaverna, or grocery store and eatery, all in one. The shop opened in 1920, when… 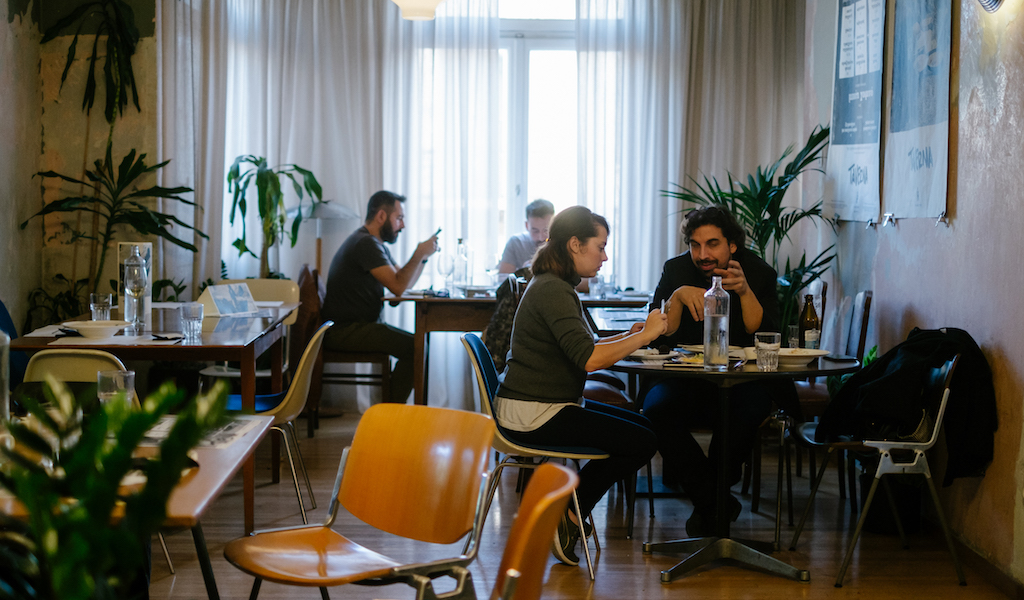 Taverna at Bios: A Pop-Up Built to Last

Athens | By Carolina Doriti
By Carolina Doriti
AthensBios in Athens’ Keramikos neighborhood officially opened in 2003, but it all began two years earlier, when the Bios Cultural Organization was first founded as an audiovisual, electronic music festival held in various warehouses near central Athens. Following his instincts, Vassilis Charalambidis, the founder of Bios, decided to refurbish a beautiful Bauhaus-style building – a former… 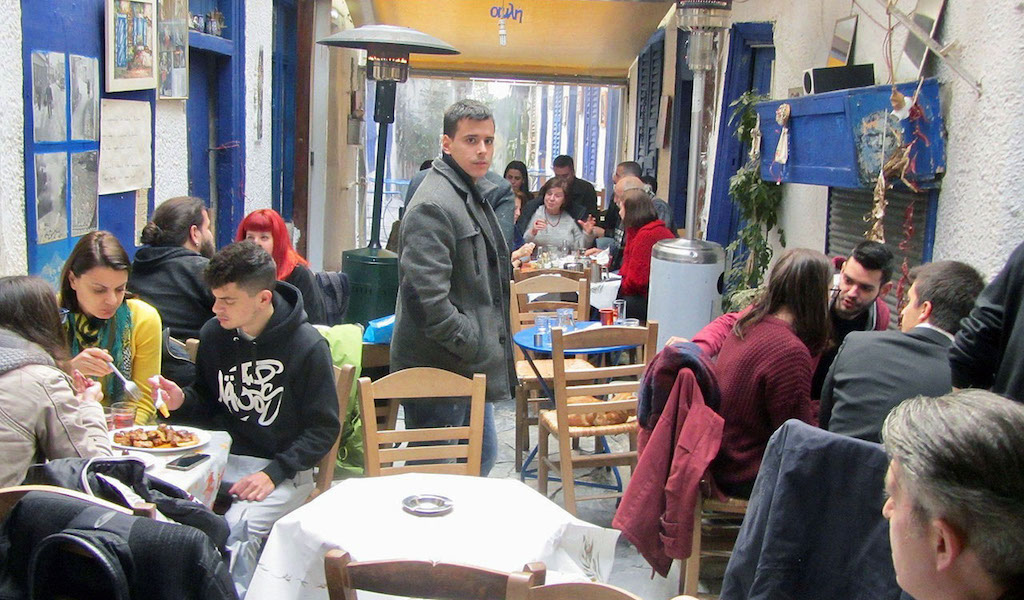 Athens | By Diana Farr Louis
By Diana Farr Louis
AthensAvli is one of those places you have to be introduced to by someone who’s already been there. Although a sign does exist above its narrow metal door, there’s so much graffiti on either side of it, you could walk right by even if you had the address firmly in your hand or mind. Once…
To Eidikon
Psaron 38 & Salaminos, Piraeus
Tel. +30 210 461 2674
Hours: Mon.-Fri. 11:30am-10pm; Sat. 11:30am-11pm