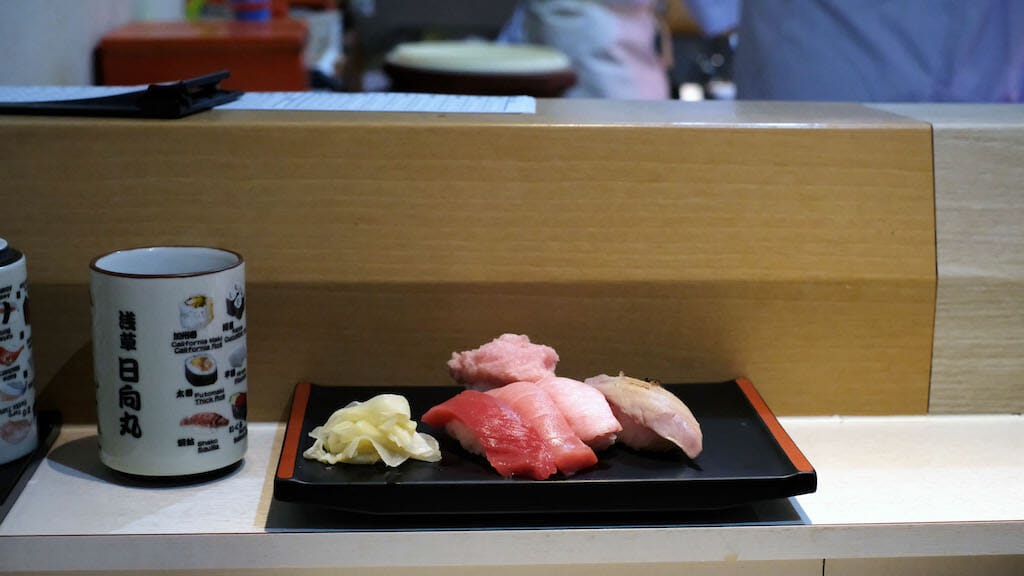 “Young people these days, you know, they eat red bean with sake,” announces the man seated next to us. There is a small glass set inside a wooden box in front of him, into which the waitress has just poured so much sake it threatens to overflow. He and his dining companion are picking away at a few dishes – rounds of steamed monkfish liver, grilled eel slick with sweet sauce, a plate of sushi rolls filled with lean red tuna.

“Red bream, right?” says the woman eating with him.

“That’s not so unusual, red bream,” replies Muroyama, the chef behind the counter, as he shapes a piece of sushi.

“My son drinks sake while snacking on red bean mochi,” the man adds. “He told me the other day.”

“Well, I often have dorayaki with my daiginjō,” says Muroyama, placing the finished sushi in front of us. The idea of this sushi chef snacking on a fluffy pancake stuffed with red bean paste alongside a bottle of finest-grade sake is incongruous, more than a little funny.

“Is that so,” the man says, nodding slowly. “Isn’t that something.” 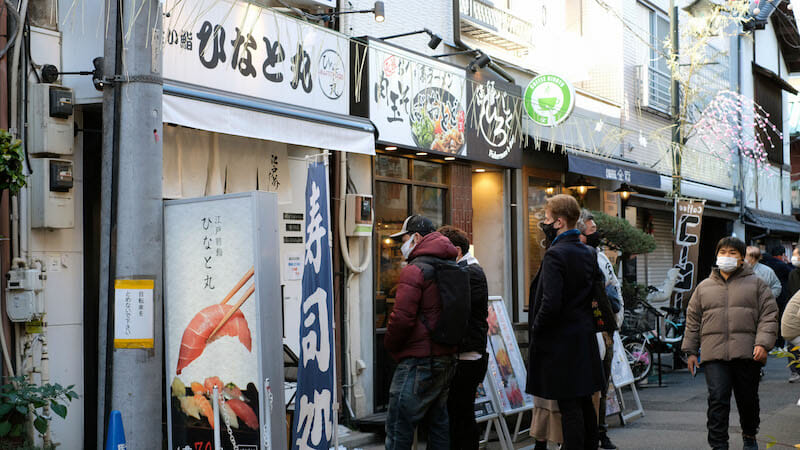 It’s noon on the first day of 2022 in Tokyo’s historic Asakusa neighborhood and we find ourselves in Hinatomaru, a casual standing sushi bar. There are few better places to eavesdrop on conversations than in small bars like this one.

Outside, thousands of people bundled in winter coats and kimonos throng the main approach to Sensoji, Tokyo’s oldest Buddhist temple. Shepherded by police into a queue spilling out onto the road in front of Kaminarimon Gate, which has been closed off to cars today, they’re here for hatsumōde, the first shrine or temple visit of the new year. We decided to forgo the crowded shrine for our own venerable tradition of hatsuzushi: the first sushi of the year. 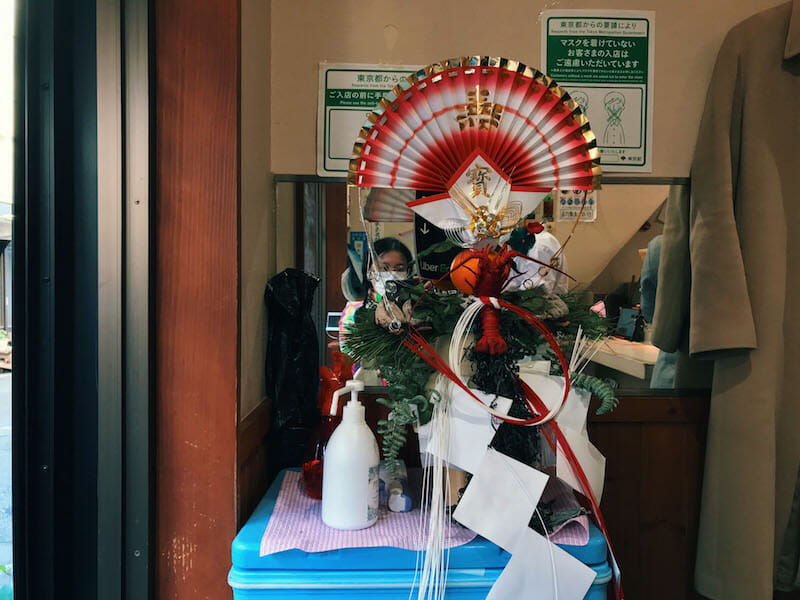 In Japanese, “hatsu” (meaning “first”) can be combined with any number of different kanji/words to mean “first something,” e.g. hatsu-yuki (first snow), hatsu-koi (first love) or hatsu-mimi (first ear, or “this is the first I’m hearing of something”). It’s easy to create your own compounds; thus, our very own: hatsuzushi, 初寿司. What better place to celebrate an invented tradition than at a sushi bar we love –inexpensive, unpretentious and open on New Year’s Day when most other places are shut? (The A+ tuna head doesn’t hurt, either.)

Every few minutes, you hear the whoosh of a blowtorch as Murayama or his colleague flame-sears a piece of sushi, the heat coaxing sweet, smoky flavors from the fish.

Opened in 2015 as a standing bar by the conveyor belt sushi shop of the same name nearby, Hinatomaru built their reputation on offering affordable, good quality fish and toppings. They have little in the way of social media presence; instead, the enthusiastic recommendations of rickshaw runners in Asakusa brought people to their doors – so much so, they managed to open two more locations during the pandemic in Ginza and Shinbashi, respectively. 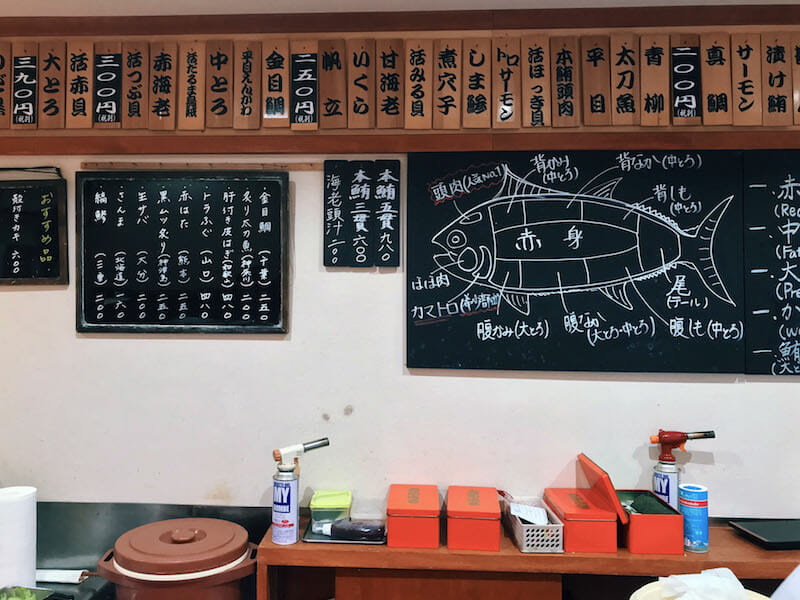 After a short wait in the bracing cold, breathing in the thick fog of burnt butter and caramelized sugar wafting from the melon bread shop opposite, we’re in. You could squeeze in 10 diners at the counter here, perhaps a snug dozen during pre-pandemic times. The music ricochets between bouncy J-pop, 70s folk and melodramatic enka ballads. Muroyama is at his usual place behind the counter near the back of the restaurant. We’d mentioned on a previous visit a few weeks back that a friend, J., would celebrate his birthday on New Year’s Day.

“Oh, we’re open that day,” said Muroyama. “You should bring him here. We’ll see you then.”

Although there’s a wide range of fish on offer, Hinatomaru specializes in serving tuna from head to tail. On most days, there’s a large diagram of a tuna hanging on the wall, labeled with all the different parts you can order. There are the usual suspects – akami (lean red meat), chutoro (moderately fatty meat), ōtoro (fatty belly meat) – but also naka-ochi (medium-fatty backmeat, scraped from the bones), kamatoro (tuna collar/jaw) and zuniku (tuna head). Nothing is wasted. 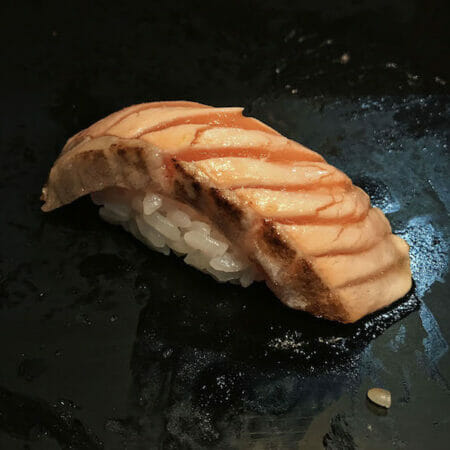 Several paper pads sit atop the glass counter in front of the two chefs, who call out a steady stream of orders as they scribble them down between making sushi. One salmon, coming up. Two eggs. One draft beer. Edo-style tuna. One uni and one ikura. Their pens glisten with fish grease. Every few minutes, you hear the whoosh of a blowtorch as Murayama or his colleague flame-sears a piece of sushi, the heat coaxing sweet, smoky flavors from the fish.

We begin with a five-piece tuna sampler. True to form, the shari (rice) is sharp but sweet, vinegary enough to cut through the fattier fish, in particular the zuniku, a mound of roughly chopped head meat that tastes like tuna butter. What next? Listening in on everyone else’s orders is always a good idea. Two guys in jeans and hoodies have replaced the couple next to us and they’re ordering with abandon: sea urchin, ikura, botan shrimp, flame-seared tachiuo (scabbard fish), tuna, tuna, sea urchin, ikura, hairy crab miso, more tuna. They clearly know how to start the new year in style. 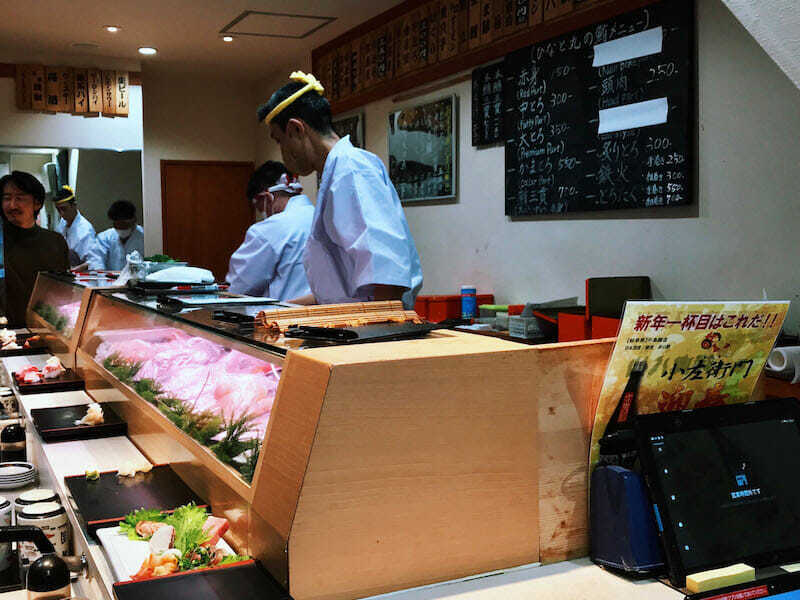 We eat in quick succession, cribbing ideas from the guys next door: omelet, amberjack, scallop, more scallop. The seared tachiuo is a new favorite for us – white, firm-fleshed, a touch of salt bringing out its subtle flavors – as is the zuwaigani miso, shredded hairy crab meat mixed with the umami-packed mid-gut glands of the crab.

“Happy birthday,” says Muroyama, placing a piece of sushi in front of J. An off-menu piece, lean tuna slices artfully arranged into a flower shape on top of a ball of rice, topped with a scoop of salmon roe. J is delighted. These are the perks of being a regular at a small neighborhood bar. This isn’t high-end, rarefied sushi; it’s fast food at its finest and quite possibly one of the best ways to start a new year. 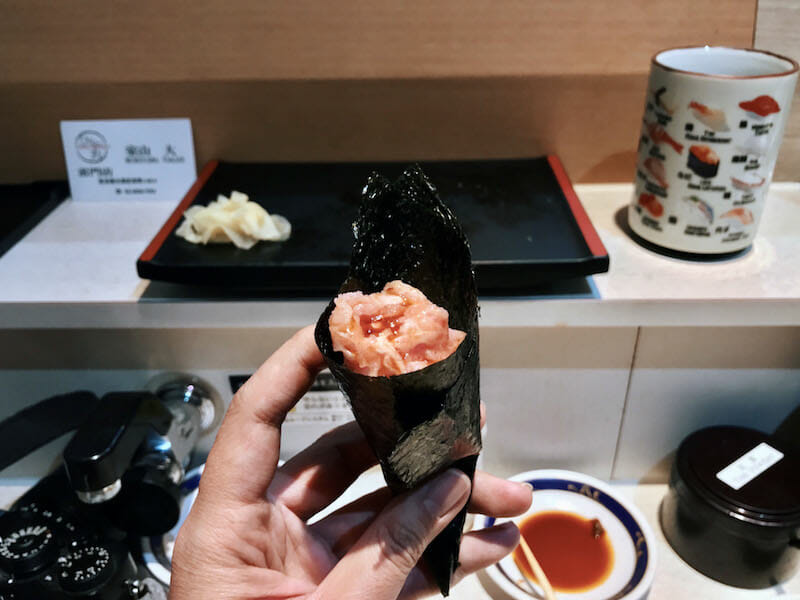 We end with a zuniku hand roll, which Murayama presents to us with a flourish. A seaweed cone filled with rice and a generous dollop of soy-kissed head meat, a perilla leaf inside for fresh green zing. We’ll take this over ice cream any day of the week. Afterwards, we stumble out into the bright winter sunshine, filled with fish and thirsting for a coffee. The rest of 2022 awaits – who knows, we may even try red bean with sake this year.

*Japanese-speaking readers will note that this conversation makes no sense in Japanese. The homophones originally played on the difference between ankou アンコウ (monkfish or anglerfish) and anko 餡子 (red bean paste), so I translated as above for an approximation of the exchange.