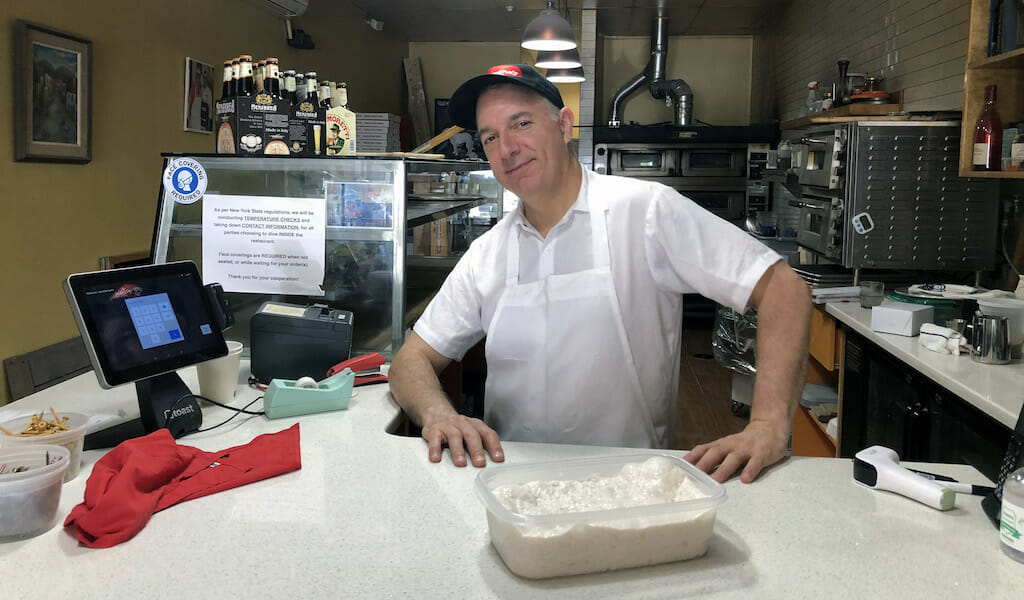 “Pizza’s always been a part of my life,” asserts Dave Acocella, the resident dough wizard at Philomena’s in Sunnyside – and he is hardly exaggerating. “I used to cut school growing up in New Jersey to go to Joe’s Pizza on Carmine Street. What a great slice,” he adds.

We think it would be more appropriate to say that for Dave, pizza is life. When we ask him what is the greatest thing about owning a pizza shop, he answers, without skipping a beat, “Getting to eat my pizza, of course.”

Pizza is a humble food, consisting of seemingly simple ingredients: dough, sauce and cheese. Great pizza, according to Dave, is “when all the elements are in harmony – sauce, cheese and dough all working together.” He goes on to clarify, though, that “the dough is not just a carrier of the ingredients, it’s an ingredient in and of itself.” And it is with the dough that we get to the heart of what makes Philomena’s so special – and after only two and a half years in business, already a pizza destination attracting people from all over New York.

All of Dave’s doughs undergo an extensive fermentation process of anywhere from three to five days. For his classic Neapolitan-style pie, it’s in the four to five day range, whereas the more famed square slice ferments for three days, not a day more or less. “Some people think I’m crazy,” he admits gleefully, regarding the unusually long fermentation time and higher hydration levels of the dough, which also leads to a slightly longer cooking time. While most Neapolitan-style pies cook for about ninety seconds, Dave’s takes approximately four minutes. “Lots of places will make the dough early in the day, let it proof, and bake it off that night,” he tells us. However, this “shortcut,” as Dave thoroughly explains, does not allow the dough ample time to ferment, which, among other issues, makes it harder to digest and keeps it from developing a more complex flavor. 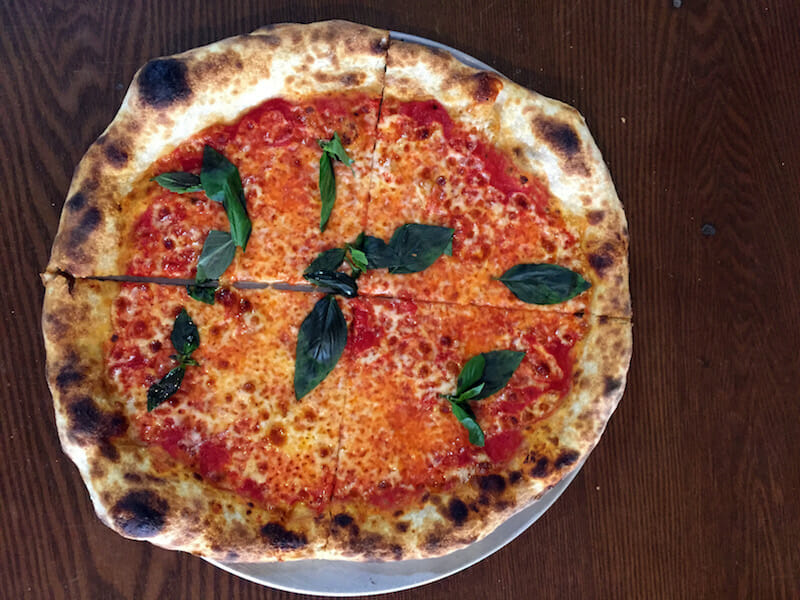 Dave clearly takes his time developing the dough, no shortcuts, additives or enrichments (egg, milk, etc.). And it shows: His doughs yield a terrific tang and superb texture, soft and chewy but with a glorious charred crispy crunch.

He was equally meticulous when it came to developing his square pie, which took him a total of three years and was inspired by Gabriele Bonci’s reinvention of Roman-style pizza (Bonci, together with Gino Sorbillo, comprise what Dave calls “the Mount Rushmore of pizza making in Italy”). Contrary to his Neapolitan-style pizza, in which the dough is shaped, toppings are added and the pie is baked, Dave’s square slice is shaped and baked independently, which allows it to achieve its signature crispy bottom and towering height.

“The dough is not just a carrier of the ingredients, it’s an ingredient in and of itself.”

The famed square slice is clearly the star of the show. Eager customers will saunter in at 4 p.m. – opening time – and inquire, “Any square slices today?” “Not yet… maybe a little later?” Dave replies patiently. With a hydration level of nearly 90 percent, the dough for his square pie is extremely temperamental and requires special handling, making it a very time-intensive process. Furthermore, the timing of the square dough is essential: It must be baked after 72 hours of fermentation time. Any sooner and the dough will fail to bake properly, while any longer and the glorious airy crumb that developed over the course of 3 days will start to fall. As a result, there are an extremely limited number of square pies each day.

With such simple ingredients comprising the dough (water, flour, yeast), the process is remarkably nuanced and complex. There are seemingly endless variables at play, including but not limited to the temperature of the environment (which affects the rate at which the dough ferments), the temperature of the oven (which affects the way in which the pizza bakes), the level of hydration, the proofing time, the type of fermentation action (starter versus pre-fermentation, also known as biga) and countless others.

Dave even goes as far as to explain, in detail and with gusto, the sensitivity needed to properly place the dough in the oven, so as not to disturb its integrity. When turning it in the oven while cooking, it is imperative to turn it in such a manner that the pizza is in exactly the same spot, otherwise you risk some sides of the pizza cooking faster (or slower) than others. Dave chuckles a bit at his unprompted dough demonstration, while admitting that these minuscule distinctions really do make a difference in the end product. 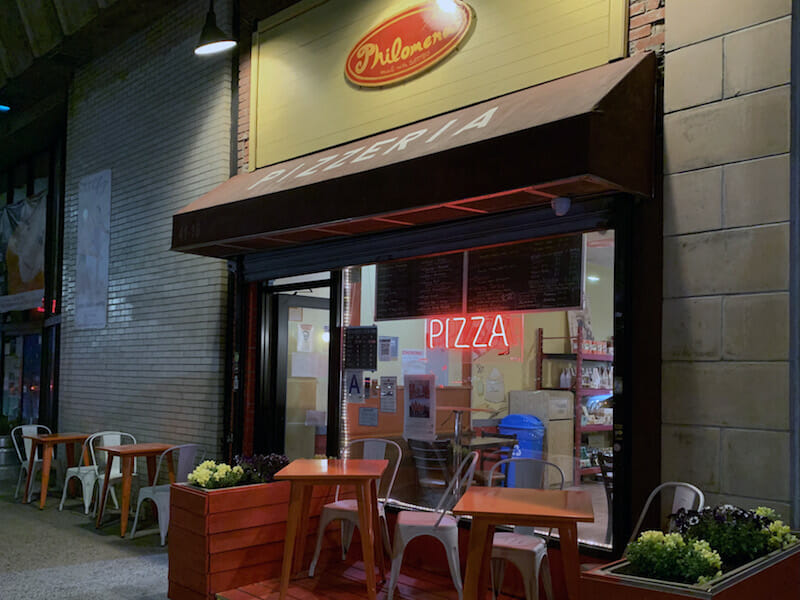 With so many variables and factors at play, it is essential to note that Dave credits the helping hands of pizza prodigies, who were crucial in teaching him many of these techniques. Dave was working at Da Salvano, an Italian fine-dining institution in Greenwich Village, when he decided to pursue an apprenticeship with pizza savant Paul Giannone of Paulie Gee’s in Greenpoint. Dave remarks that Paulie G “is one of the best guys in pizza culture, so caring… not a day goes by where I don’t think about working at Paulie Gee’s.”

After his apprenticeship with Paulie G in 2013, Dave went on to work at Zia Esternina, Neapolitan pizza superstar Gino Sorbillo’s first foray into the restaurant business in NYC. There, Dave was the lone American working alongside some of the most prestigious pizza makers straight from Italy. “It was like my master’s degree in pizza making,” he says. “Watching them make the dough was just jaw-dropping. They would roll out the dough in 30-40 minutes, without even weighing it.” Dave would marvel at their technique, going in to weigh the dough himself after they were done simply to confirm the perfected skill of these pizzaiolos.

With such an impressive pizza pedigree, we ask Dave why he chose Sunnyside as his pizza lab headquarters. Having lived in Sunnyside for close to twenty years, his answer is simple enough: “I want to be close to my dough.” 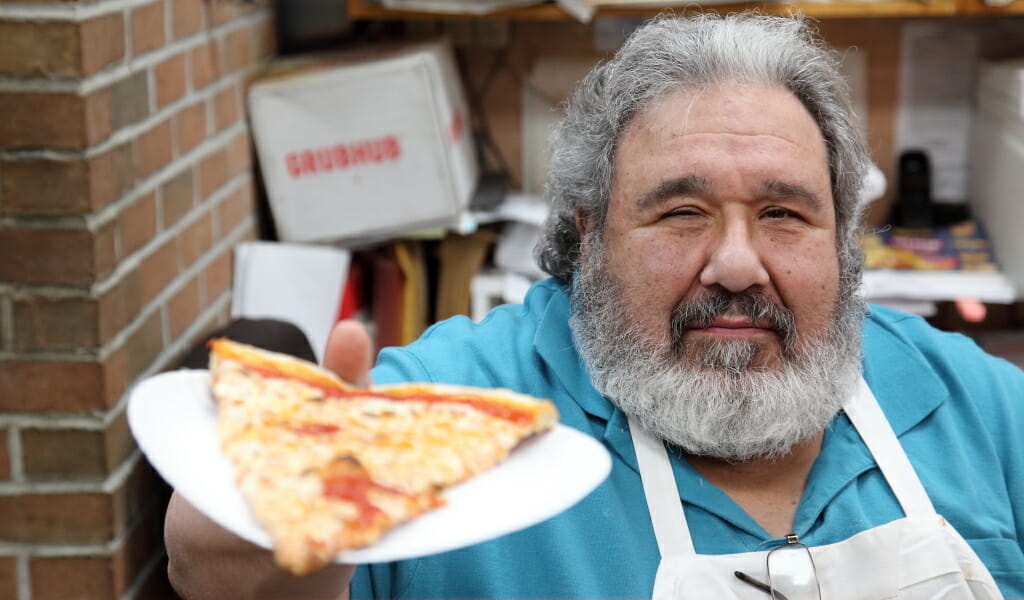 Queens | By Dave Cook
By Dave Cook
QueensSold by the slice, pizza is emblematic of New York City. It’s an inexpensive antidote to hunger pangs that can be ordered quickly, and eaten quickly, even on the go. Think of Tony Manero, the John Travolta character in Saturday Night Fever, double-decking a pair of slices while strutting through Bay Ridge, Brooklyn. At a… 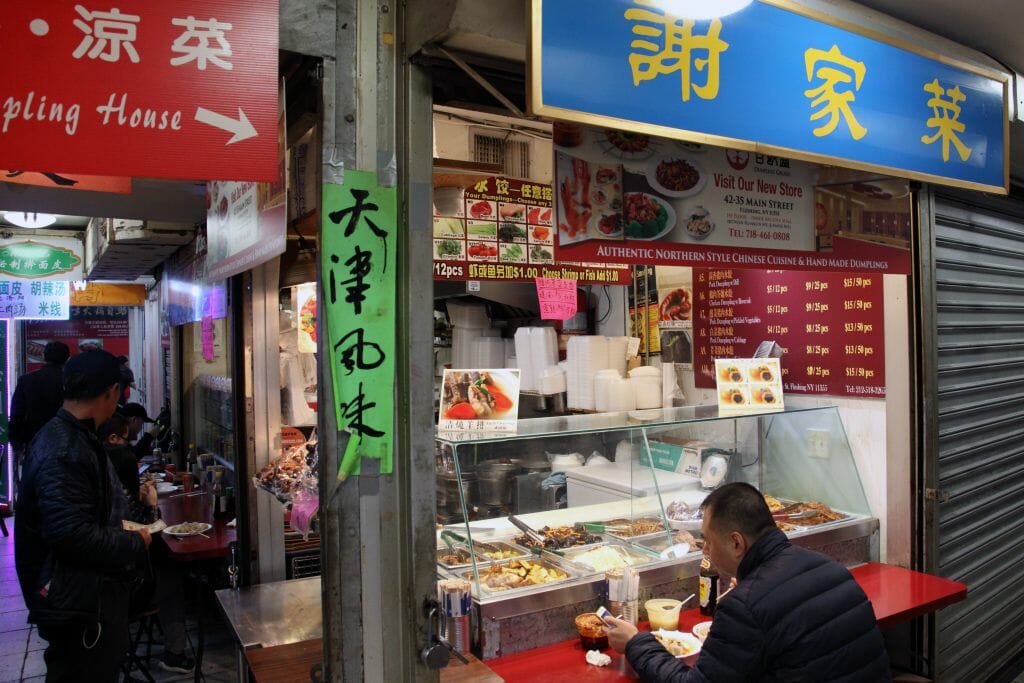 Queens | By Madeleine Roberts
By Madeleine Roberts
QueensQuick bite:  On this full-day stroll through New York’s largest Asian neighborhood, we’ll explore the area’s almost mind-blowing culinary diversity. Located on the western edge of New York, where the 7 subway line comes to an end, the Flushing neighborhood of Queens exists as a kind of world of its own. Unfamiliar to most New…