On April 26, 1926, Eusebio Joaquín González was working as a domestic servant for a pair of ascetic preachers named Silas and Saulo in Monterey, Mexico, when he had a vision – God changed his name to Aaron and instructed him to strike out on his own.

He and his wife Elisa traveled to Guadalajara, where Aaron found work as a shoe salesman, and they started a church in their apartment. When their congregation grew large enough that it was time to build a temple in the city, once again a name was revealed to Gonzalez in a vision: Church of the Living God, Column and Support of Truth, Light of the World. It came to be known as Iglesia La Luz del Mundo. There are now seven million believers worldwide.

It’s a Christian church with an ethic of simplicity: there are no saints, crosses or religious imagery inside the churches. The congregants sing hymns divided according to sex. Women wear long skirts and cover their heads with lace veils during services. They wear no jewelry, and piercings and tattoos are forbidden. There is no Christmas nor Semana Santa, but every August there’s a Holy Supper or Santa Convocación, where as many as half a million worshippers gather for a week in Guadalajara, then disperse to all corners of Mexico, Central and South America and as far as Switzerland and Ethiopia.

Among them is Maria Elena Ramirez. Born in El Salvador, Ramirez today calls the Queens neighborhood of Elmhurst home. The Queens address of the LLDM church opened in the 1980s on a residential street off 37th Ave. It is noticeable today because of the plaster lions guarding the door, the colorful lights above, and the small but bustling pupusa stand on the sidewalk out front.

Maria Elena, along with her daughter, Irma, and granddaughter, Abby, oversee the careful production of these excellent Salvadoran griddled cakes. When we went to sample their fare on a cold Friday in March, there was a steady stream of customers by 7 p.m. 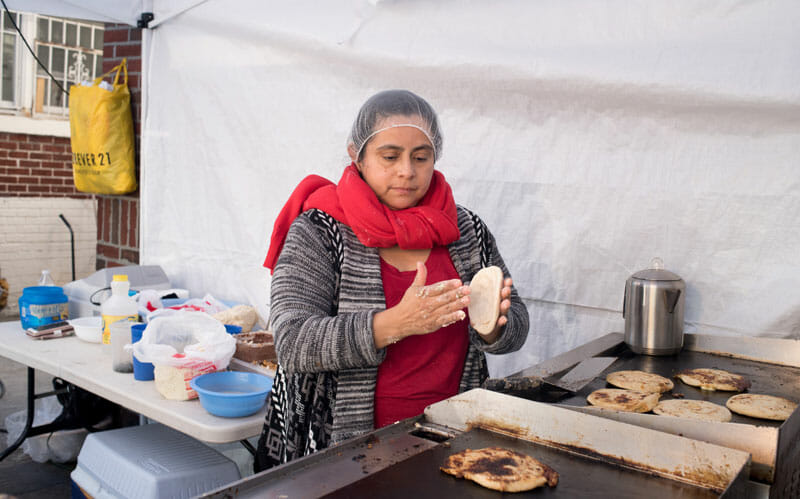 “It’s a fundraiser for the church,” Abby said. “We’re here every Friday and Saturday.”

Maria Elena and Irma grabbed handfuls of white corn masa, slapped them back and forth in their hands, worked in the fillings and lined them up on the griddle. As soon as they reached the perfect point of crispiness, the disks were piled up in to-go bags and handed to hungry customers, many of whom they knew by name. Children played on the sidewalk as brothers and sisters and parents ate and waited and talked in a mix of English and Spanish.

Pupusas are usually stuffed with cheese, meat or vegetables. The favorite at Maria Elena’s stand are the revueltas, which combine beans, cheese and chicharrón.

We took a seat at the plastic stools in front, and Abby told us about the operation. We sampled several varieties, each more delicious than the next. We grunted in pleasure, ruminating on the crunch and warmth, as the hymns of the congregation emanated from the brick building housing the church.

“They are a little like the gorditas they make in Mexico,” Abby said. “But we make them differently. And the pork takes much longer. We fry it, let it cool, then put it through a meat grinder, then mix it with tomatoes, bell peppers, onions and oregano, then stew it together for hours.”

Maria Elena travels to Salavador every other week to bring fresh ingredients. She brings fresh queso duro blandito, a crumbly, hard Salvadoran cheese, which she mixes with American-made mozzarella. But she also brings other Salvadoran ingredients to mix into the pupusas.

“There are secrets,” her daughter Irma told us. “She won’t even tell me the recipe!” 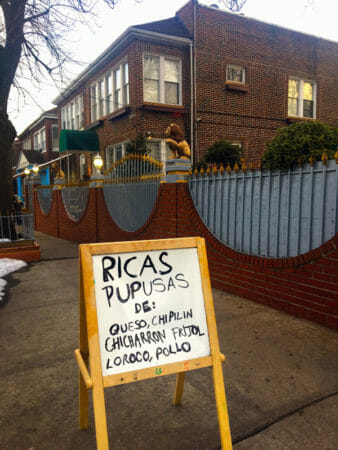 The night we went there were two versions with fresh herbs Maria Elena had just brought in. She arrived from Salvador just the night before.

There were pupusas stuffed with green, clover-like leaves of fresh chipilín, which had a satisfying sour taste. Others contained the unopened pods of loroco flowers, whose nutty flavor cooked up to a savory crunch.

The pupusas are served with a spicy relish called curtido – it contains shredded green and red cabbage mixed with vinegar, carrots and herbs. Like her red tomato salsa, Maria Elena’s curtido comes with or without chile de árbol, depending on your need for fire. We smothered ours with the spicy version, which stung slightly but didn’t overpower the flavors.

We shared five between the three of us and blissfully washed them down with fresh horchata and agua de jamaica, an infusion made from hibiscus flowers.

As we got up to take a picture of the three generations of cooks together, Abby’s two sisters showed up to lend support in the face of the growing crowd.

We told them we’d be back soon, asking if they were open all year round.

“Except August. Then we all go to Mexico, to our Holy Supper in Guadalajara. We stay there for a week, and then we get a vacation.”

We headed off past the lions guarding the church, its colored lights flashing behind us. Tucked behind the brick wall we noticed a concrete pond where several whiskered carp sat silently in the shadows. We rounded the corner wondering if the Monterey vision of 1926 had included us feeling fat as those fishes.

By
Brad Fox
, photos by
Eszter Domjan and Melanie Einzig 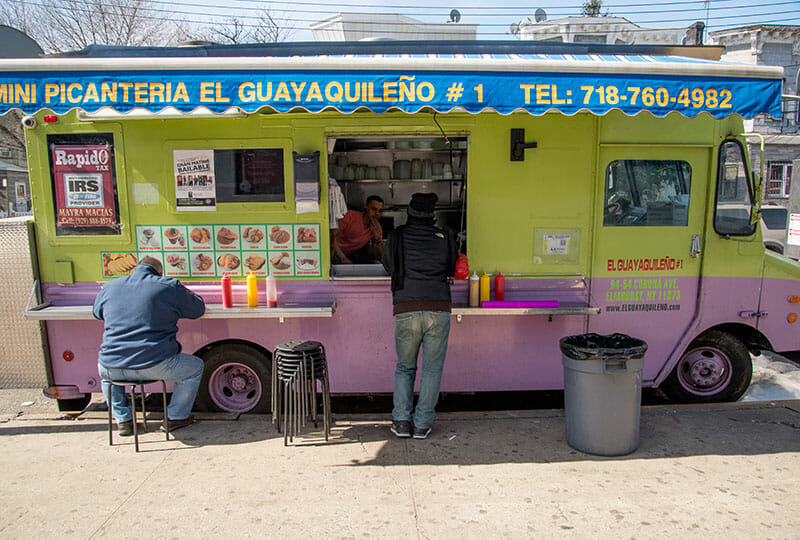 Queens | By Esneider A
By Esneider A
QueensQuick Bite: On this food tour in Queens, we’ll hit the streets on a Saturday, when the griddles, grills and vendors are out in full force, to explore Corona’s culinary essentials. To many, the Corona neighborhood of Queens is something of a mystery, a place you only pass over on the elevated tracks of the… 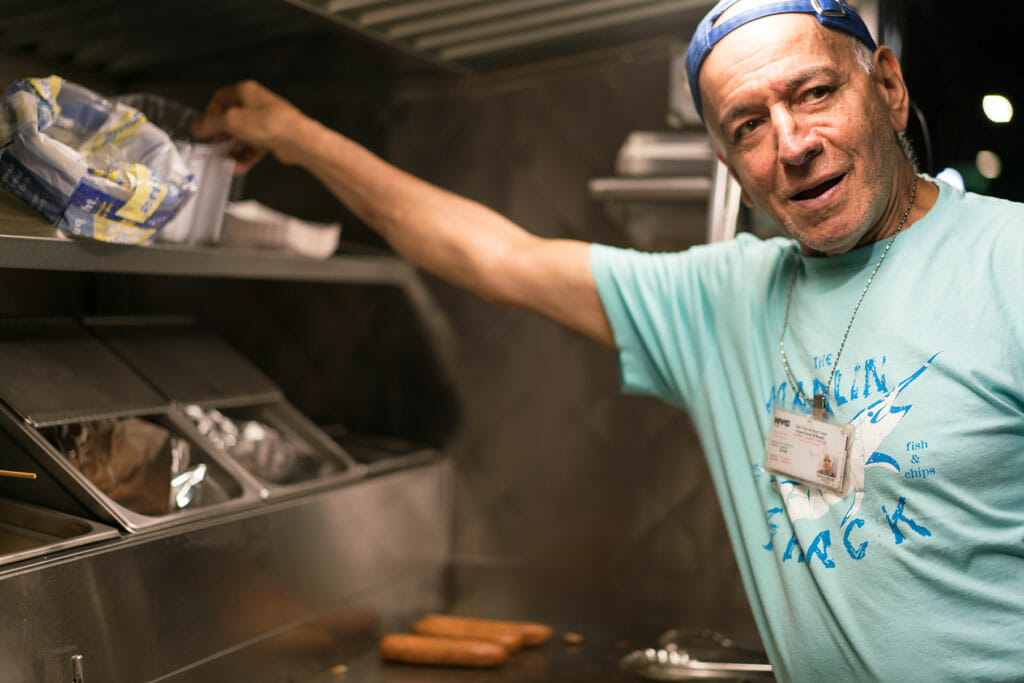 Queens | By Sarah Khan
By Sarah Khan
Queens"Me siento latinoamericano de cualquier país, pero sin renunciar nunca a la nostalgia de mi tierra: Aracataca…” “I feel Latin American from any country, but without renouncing the nostalgia for my land: Aracataca…” ~Gabriel Garcia Marquez Most are animated, some waver and occasionally one stumbles. Every few feet, a door swings open and a bolero,… 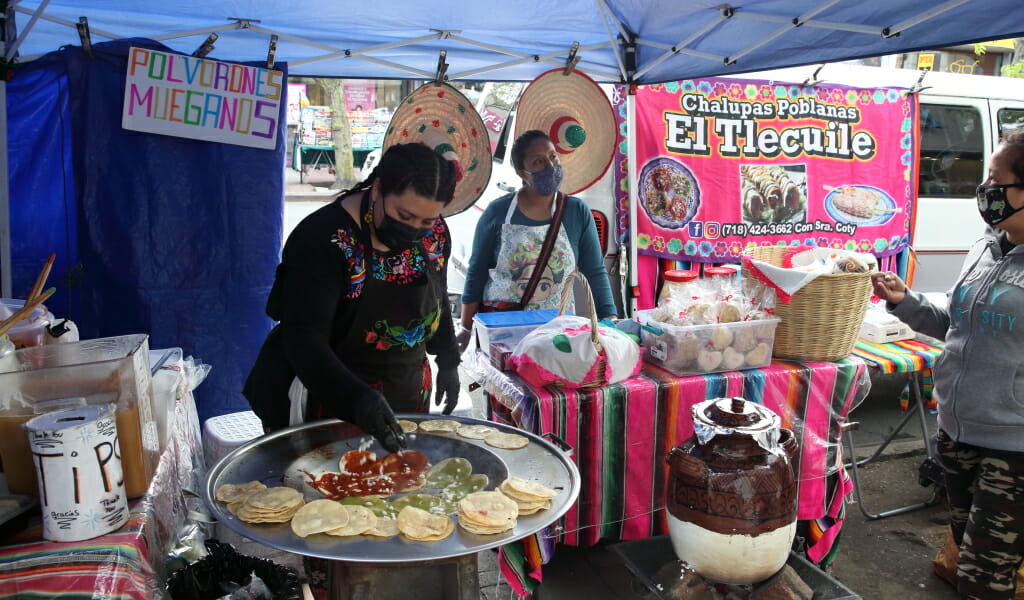 Queens | By Dave Cook
By Dave Cook
QueensLate on a weekend afternoon, the clamor that greets us is intense, even for Queens. As we descend from the elevated 7 train to Junction Blvd., on the border between the neighborhoods of Jackson Heights and Corona, dozens of street vendors make themselves known by the display of their wares and by their come-ons, spoken…