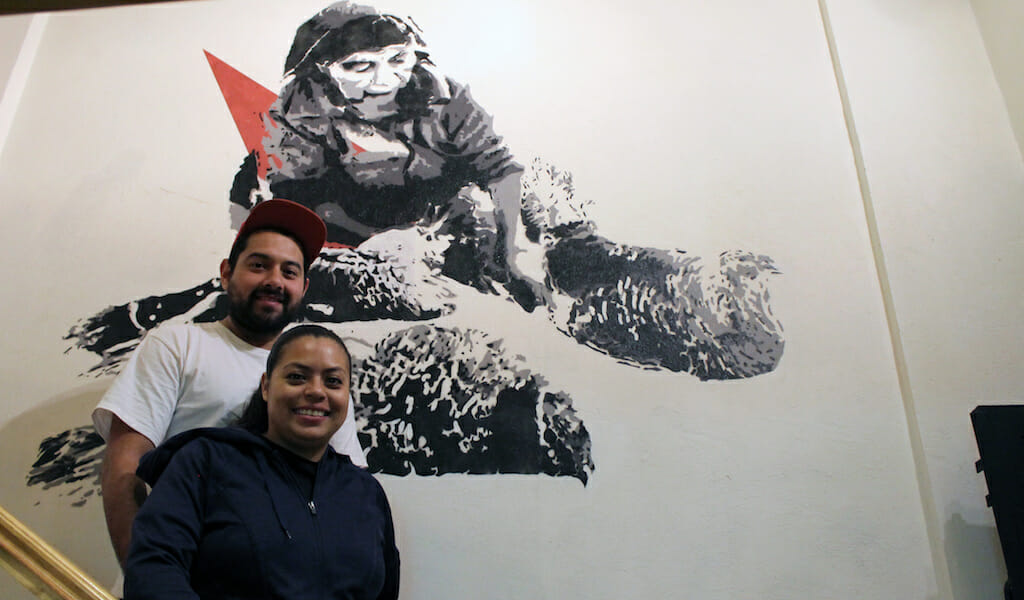 “There are two Oaxacan foods – what is served for tourists, and what people really eat,” says Marahí López, the chef at Comixcal, an Oaxacan restaurant in Mexico City’s Santa Maria La Ribera neighborhood. “There is a way that Oaxacan food is sold that is totally detached from the way we eat it in Oaxaca.”

López knows of what she speaks, hailing from Juchitán, the culinary and cultural capital of the Isthmus of Tehuantepec, Oaxaca. She met Alexis Jiménez, who is from the Central Valleys surrounding Oaxaca City, while both were attending university in Mexico City. López and Jiménez teamed up to establish Comixcal in June 2016, after receiving degrees in Gastronomy and Anthropology, respectively.

The two set out to provide Oaxacan cuisine as Oaxacans eat it, while interest in Oaxacan food was booming in Mexico City and abroad. “Comixcal is an expression of what we have eaten in different regions around Oaxaca,” she says. “This is the Oaxaca we are discovering as we go.”

Their restaurant inhabits a cozy two-storied storefront a block south of the iconic Moorish Pavilion in Santa Maria La Ribera, a laid-back neighborhood full of architectural and cultural gems on the edge of Mexico City’s historic center. The restaurant is named for the clay ovens used to bake totopos, the hard corn tortillas unique to the Isthmus.

Since opening in June 2016, Comixcal has worked to win over customers who have preconceptions about Oaxacan food or were unfamiliar with seasonal fare. Oaxacan food is staggeringly diverse; the state comprises sixteen indigenous cultures, as well as Afro-Mexican communities, each with their own culinary traditions.

“Oaxaca is a poor state, and it’s a state that has to eat,” he observes. “You see many forms of poverty in Oaxaca, but poverty in the flavors of our food isn’t one of them.” 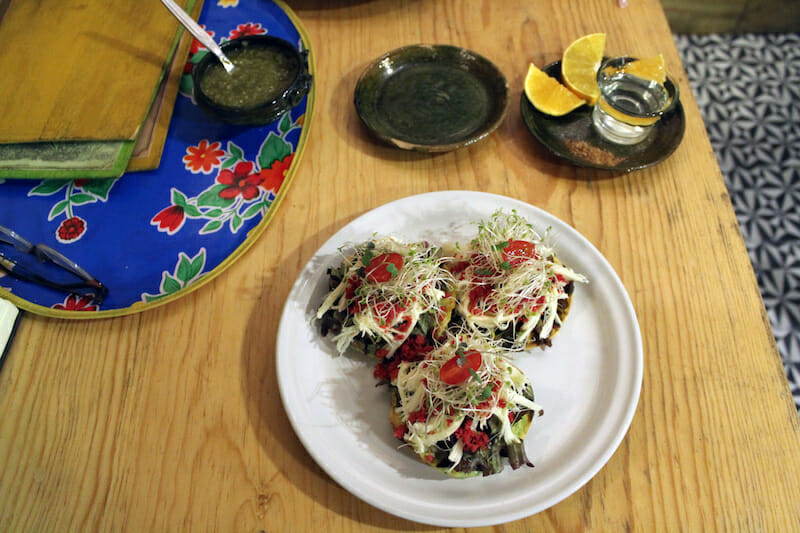 Comixcal sources many ingredients from local producers in Oaxaca, including totopos, tostadas, chile peppers and beans. Direct sourcing is part of their mission to build product supply chains to support local farmers.

“We had costumers complaining in December that the salsa wasn’t spicy,” says López. “But the chiles we use are seasonal and their flavor changes during the winter.”

She says they are gradually building a clientele that marvels in regional and seasonal complexity, instead of recoiling from it. “We want customers who want to learn about every dish, who will ask you questions.”

It’s a brisk evening in February when we visit, and young couples share mezcals upstairs, while an older couple seated on the ground floor orders a full dinner. Space is tight, but the small staff work together seamlessly.

Before we have time to review the menu, Jiménez brings out a complementary mezcal. The warm, smoky flavor kicks the chill out of the air.

The consummate anthropologist, Jiménez sees food through the lens of culture. He explains that as the spirit has boomed nationally and internationally, the intricacies of the production process are being overlooked in the interest of scale. So don’t come here looking for name-brand mezcals. More to the point, Jiménez would rather you consider the social conditions of mezcal producers than the minutiae of one agave species or another.

“Behind every mezcal is someone who worked the land to create it. That part is getting lost,” he says. As a result, Jiménez’s curated mezcal menu includes the community each mezcal is produced in, the name of the producer and the species of agave. Tobalá, cuishe, espadín, pulquero and mexicano are just a few of the varieties currently available. The menu also includes a handful of mezcal cocktails and craft beers. 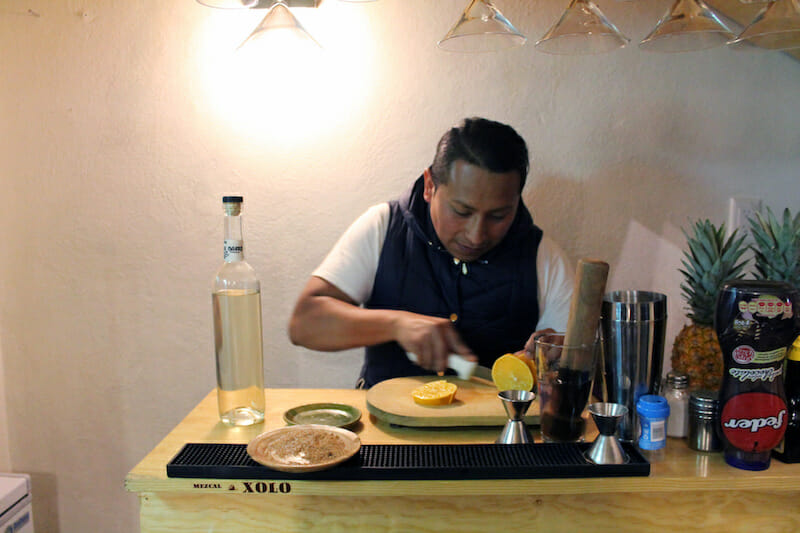 Jiménez lets the mezcals speak for themselves. “I have never said I’m an expert on mezcal, or a Maestro mezcalier,” he says. “I just know I am a lifelong drinker.”

The restaurant’s food menu is equally thoughtful. We gobble up the garnachas, tiny corn discs, lightly fried and topped with beef and a selection of salsas. Then comes the chile relleno, a pasilla chile stuffed with seasoned beef, which is served up with rice and a salad. The spice of the chile and the succulent meat pair perfectly, while the rice tempers the strong flavors of the main dish. Other entrées include tlayudas, enchiladas de coloradito (yellow mole) and estofado de lengua, a meaty stew made with cow tongue, an innovation Jiménez attributes to his grandmother.

While meat dishes make up most of the menu, generous portions of vegetables, including bean sprouts and the lightly pickled cabbage known as repollo, make for refreshing additions. Bean soup might sound like a plain dish, but flavored with avocado leaves it takes on new qualities.

Prices are accessible, especially when compared to other Mexico City restaurants that flaunt farm-to-table fare. The current menu highlights dishes from the Isthmus and the Central Valley, but López says they will soon be rolling out a new menu with dishes from Coastal Oaxaca.

“There are two Oaxacan foods – what is served for tourists, and what people really eat.”

It’s not surprising that Comixcal’s founders want you to understand the people of Oaxaca, just as much as the food – it’s to be expected when a chef and an anthropologist team up. But that mission became urgent last fall. “For us, the history of the restaurant is a story of ‘before’ and ‘after’ September 7th,” López says, noting the day in 2017 when an 8.2 earthquake hit off the coast of the Isthmus of Tehuantepec.

López posted the next day on social networks that Comixcal would receive donations to send south. She imagined they would send a pick-up truck of supplies down to the Isthmus, and then return to business as usual.

But after closing the restaurant on September 8 to organize donations, they didn’t re-open for an entire month, turning the space into headquarters for a massive donation reception and distribution system. Even after a 7.1 magnitude earthquake hit south of Mexico City on September 19, Comixcal continued to send supplies to Oaxaca.

Jiménez explains that it is not just distance that separates urban Mexicans from their rural counterparts.

“The earthquake showed us the lack of understanding of the different Mexicos,” he says. While donations overflowed in Mexico City, some rural communities faced dire shortages in the weeks after the earthquakes.

López and Jiménez diligently tracked shipments of donations from the restaurant to remote towns on the southern Pacific Coast. In the same way their menu explains to Mexico City diners where their ingredients come from in Oaxaca, the pair posted photos on Twitter to show donors exactly where their partners delivered the supplies in the Isthmus. 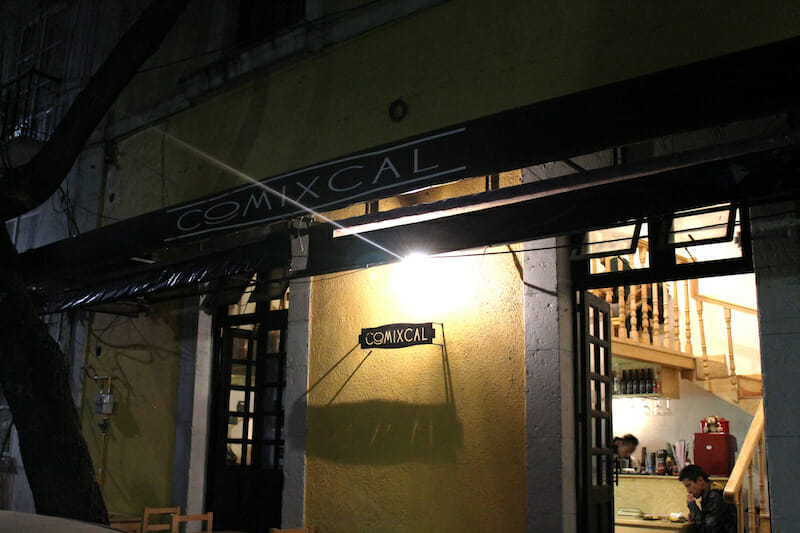 Comixcal is working to build connections, both between Oaxaca and Mexico City, and within their own neighborhood. López explains that Santa Maria La Ribera is home to a large number of Oaxacan youth who study at the nearby campus of the National Polytechnic Institute. Many of them came into the restaurant to volunteer, and to feel connected to their community, hundreds of miles from home.

During the relief efforts, she says, “You would come into the restaurant and hear everyone speaking Zapoteco, down to the different regional varieties and each neighborhood of Juchitán. That builds trust.”

The two feel right at home in the neighborhood. “Santa Maria La Ribera reminds us of Oaxaca, because people go out strolling to the Pavilion.” López says. “Neighbors put on events for the community.”

She says that neighbors came out to help at the restaurant during the earthquake, and nearby restaurants donated food. While the dining scene in Santa Maria is more limited than in neighborhoods like Juárez or Roma, López likes being off the beaten path.

Sandwiched between working class neighborhoods and trendy San Rafael, Santa Maria is starting to feel the squeeze as gentrification in Mexico City advances north. The pressures of rising rents and cost of living in the neighborhood have given birth to anti-gentrification initiatives.

“We hope it doesn’t turn into a Roma or Condesa,” says López, citing two of Mexico City’s hottest neighborhoods for dining, but also among the priciest. “The neighborhood would lose the feeling you get when you take a stroll to the Pavilion, that feeling of knowing your neighbors.”

Building close relationships with your neighbors is a relatively simple yet profound task. It is what makes Santa Maria La Ribera so quietly charming. It’s also the main aim of Comixcal – by modestly cooking up some of the best Oaxacan food outside Oaxaca, López and Jiménez want to introduce Mexico City diners to the people and culture behind this now trendy regional cuisine.

Oaxaca: A Journey Into the Heart & Soul of Mexican Cooking

Trips | By Culinary Backstreets
By Culinary Backstreets
TripsWe like to think of Oaxaca as the heartland of Mexican cooking. All those things that seems so classically and elementally Mexican – corn, chiles, moles, mezcal – can be traced back to the fertile area that surrounds this historic city. This is true about not just ingredients but cooking techniques as well. The use…
Comixcal
Dr. Atl 176, Santa Maria La Ribera
Hours: Tues.-Sat. 2:30-10pm; Sun. 2-6:30pm