Ask anyone from the Eastern Turkish city of Bitlis where büryan kebabı comes from, and they’ll proudly tell you that the slow-cooked meat dish hails from none other than their hometown, near Lake Van. Pose the same question to folks from Siirt, just 100 km south, and they’ll insist anyone making it from a city other than theirs is doing it all wrong.

Büryan kebabı refers to lamb (or mutton) slow cooked in an underground tandır oven until pull-apart tender. The meat, crackling with skin and fat, is sliced or cut into chunks and served atop fluffy, warm bread. The fat from the meat soaks into the bread below, making it glisten. No matter where it’s from, büryan is the kind of dish that leaves fingers slick with oil, returning eaters to a base state, shoveling unadorned, steaming meat into their mouths. It’s the kind of dish that always leaves you thinking about how soon you can have it again. 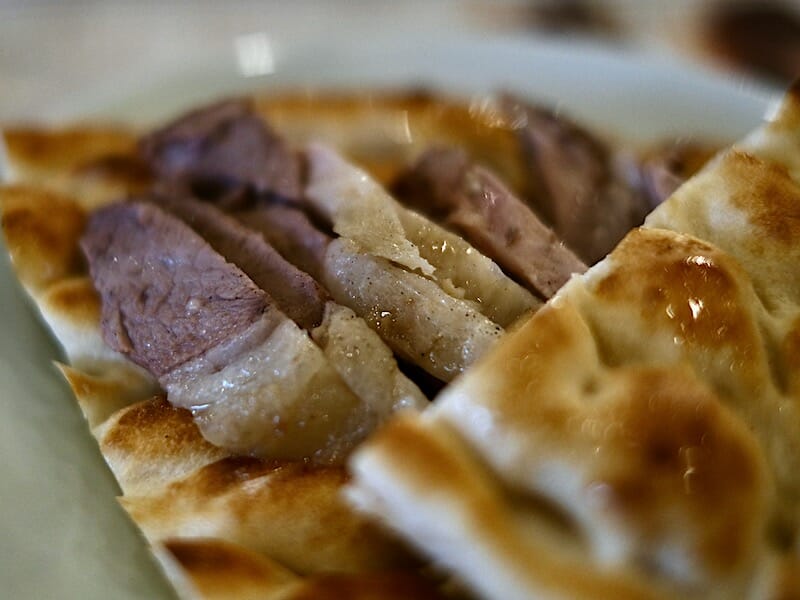 Before We Begin: An Ode to Siirt Şeref Büryan

The first time we had büryan, a friend told us he was taking us to the “meat palace.” Kadınlar Pazarı, the open-air shopping district in Fatih where many of the büryan restaurants in the city are concentrated, is known for its Eastern Turkish and Kurdish specialty shops. Freshly butchered lamb carcasses hang along the plane tree-lined street, and shoppers haggle over every cut of meat (and intestine) imaginable. We sat down at a laminate table in what was then Siirt Şeref Büryan (they’ve since changed locations) and ordered most of what, then, was available on the menu: büryan, the pastry-encased rice dish called perde pilavı and boiled içli köfte, meat-stuffed bulgur dumplings.

The büryan was delectable – small chunks of tender lamb, crispy-fatty skin and drippings-soaked bread. The içli köfte was just as good. A perfect dumpling (the platonic ideal of food), spicy, rich gravy oozed from the bulgur shell when we split it in half. Cracking open the buttery pastry shell of the perde pilavı was a similar experience, with steam carrying the smell of cinnamon and pine nuts flooding our senses. 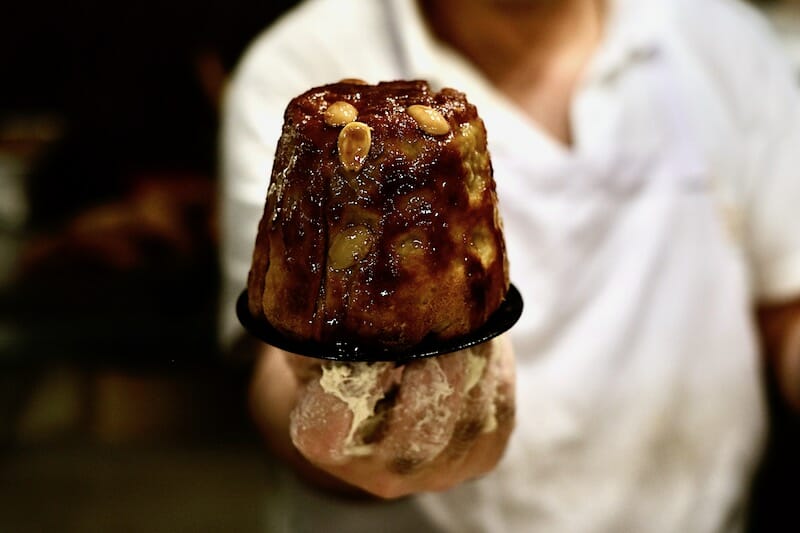 We would not be exaggerating if we told you that we ate at Siirt Şeref at least once every two weeks for several months. We stopped when the scale began betraying our obsession, but have returned to the always-comforting dish routinely over our years in Istanbul. Most recently, we stopped by their new location on Serdab Sokak in November. While the food is just as good, the decor reminded us that other büryan spots deserve some love. With the laminate tables and bad fluorescent lighting having been replaced by nouveau glitz – shiny floors and a spaceship-like exterior – it’s clear the folks at Siirt Şeref are doing very well for themselves.

On an unusually warm day in mid-November, we strolled through the arch of the Roman-era Valens Aqueduct, which buttresses the open-air shopping district, and marveled at our options. Perhaps we’d been blinded by Siirt Şeref and its fluorescent lighting, but there were just so many büryan restaurants to choose from. Kindly amcalar (uncles) ushered us towards the entrances of each restaurant but we demurred, ducking instead into the heatlamp-warmed patio of Tarihi Paşahan Konağı, a büryan salonu (hall) dating back to 1985. 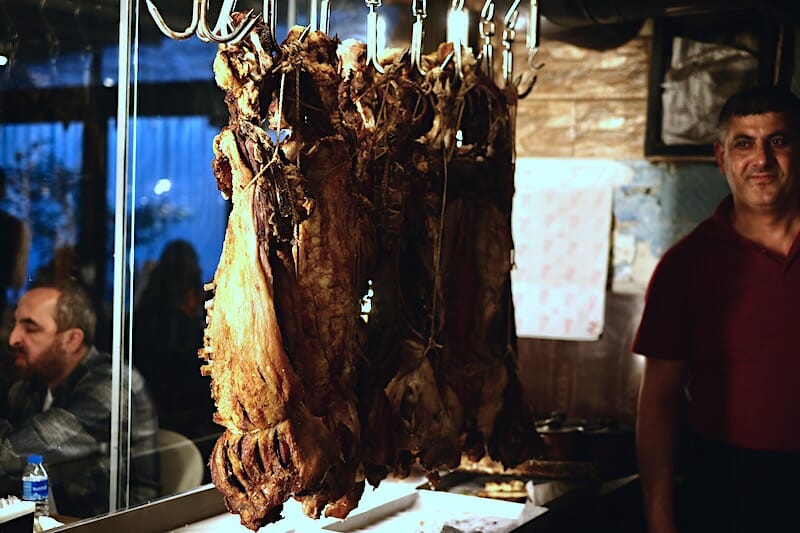 The host, Ahmet Yildiz, greeted us with a smile. Though he laughed when we told him we’d come for a büryan sampling, he sat us by the büryan usta (master) and hurried off to bring us steaming bowls of avşar, soup made with büryan and drippings collected during the roasting process, from about 3.5 meters underground. The whole thing slow-boils for at least five hours, resulting in a spicy, meaty, rich stew. The büryan melts in your mouth and the broth – followed by a bite of the accompanying raw onion and arugula – is perfectly rich and seasoned.

Tarihi Paşahan Konağı is a hardcore Bitlis place. The owners, founders and, and as far as we could tell, most of the workers hail from the city and its environs. Here, the underground tandır oven is directly next to where the usta cuts the meat before placing it atop fluffy pide flatbread. 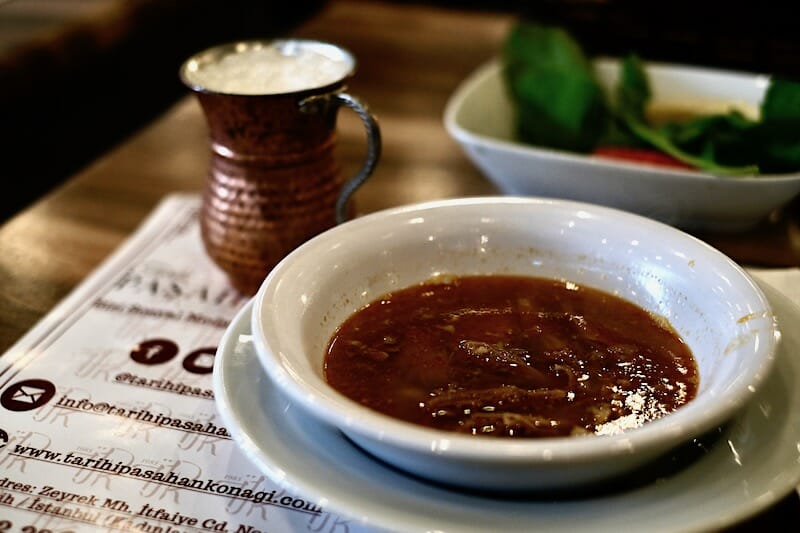 The oven at Tarihi Paşahan Konağı is lit in the morning, and the first lambs of the day are hung inside. Those two are roasted, pulled out, and the next two are put in. The lamb is served immediately upon coming out of the oven, never reheated – Bitlis style, according to owner Semih Arsantas. The usta cuts it into thick slices – think Thanksgiving Turkey-sized – and puts it directly on piping-hot bread. Places like Tarihi Paşahan Konağı can go through up to 16 lambs a day on the weekend.

Siirt and Bitlis are neighboring provinces in Turkey’s east, near Lake Van. Until the late-19th century, the two provinces were ruled separately – Siirt was a part of Diyarbakir province, while Bitlis was independent. However, in 1892, Siirt was connected to Bitlis province and the two were ruled together until 1919, the end of the Ottoman Empire. Since 1923 and the founding of the Turkish Republic, the two have been separate provinces. The result of this back and forth is a dish – büryan – that is very similar, but is distinguished by slight, tightly held regional differences in preparation. 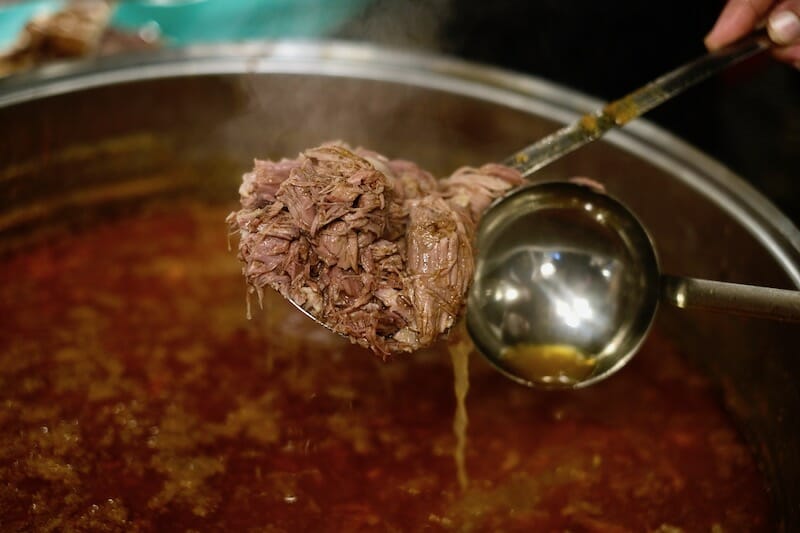 Brought to us by a (still-smiling) Ahmet on a bed of glistening pide, the büryan meat was so tender it could have been cooked sous-vide. Büryan tastes strongly of lamb and fat, that’s part of its appeal, and the quality and cooking method means no additional seasoning is needed – not even salt. We finished our serving and sat back, content.

Semih says there is no comparing his restaurant’s büryan with that of the restaurants on the rest of the street. “You see that büryan?” he asks, gesturing to the meat hanging in the window of the eatery across the way. “They’re so small they could be rabbits.”

Once we found room in our stomachs, we arrived at Uğur Büryan Kebab Salonu – owned, fittingly, by a man named Uğur – down a side street from the main pazar. They were cutting the last of the three lambs they had roasted for the day. Where Tarihi Paşahan Konağı is imposing, slapping you in the face with its expertise, Uğur Büryan Salonu is austere. The lighting is, frankly, bad. The tables are kind of sticky. There are only four of them, and there isn’t really a menu. We don’t need one: They’ve got büryan.

Kadınlar Pazarı, the open-air shopping district in Fatih where many of the büryan restaurants in the city are concentrated, is known for its Eastern Turkish and Kurdish specialty shops.

Uğur is a Siirt place, and they seem notably less competitive than the pro-Bitlis folks at Tarihi Paşahan Konağı. They explained to us that, yes, they roasted their lamb in the morning and re-heated it throughout the day in a wood-fired oven. And yes, their animals were smaller. But they were confident in the quality of their büryan.

As they should be. 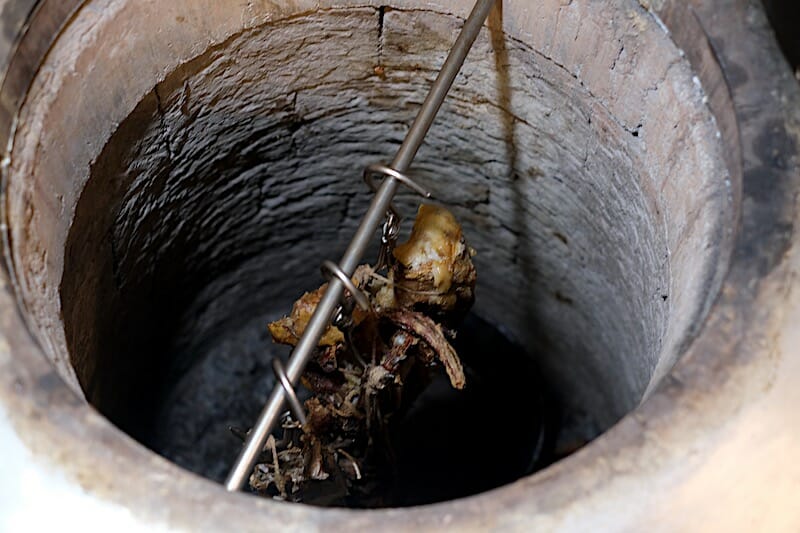 Siirt büryan is a different experience. The pieces of meat are smaller, and the ratio of skin and fat to meat higher. But the re-roasting in the oven lends each piece a crispy outer quality that the Bitlis version lacked. The pide at Uğur, too, was notable. We were particularly taken by the lack of ostentatiousness: They make one thing, they make it well, and they don’t feel the need to defend it.

We hobbled across the street, already stuffed, to Sur Ocakbaşı, recommended by a friend from Adana. More florescent lights and a million signs advertising the restaurant’s wide-ranging menu are a bit of an assault to the senses at first, but tucked in a booth upstairs, you could be anywhere in eastern Turkey.

We’ll start by saying that the büryan at Sur was, well, not great. The restaurant’s host, Hıdır, told us they make büryan because it’s what sells on that block, guiding us to order other, outstanding dishes on the menu. The owners are from neither Bitlis nor Siirt, but proudly hail from Diyarbakır – Sur being the predominantly Kurdish district within the walls of the Diyarbakır Fortress. 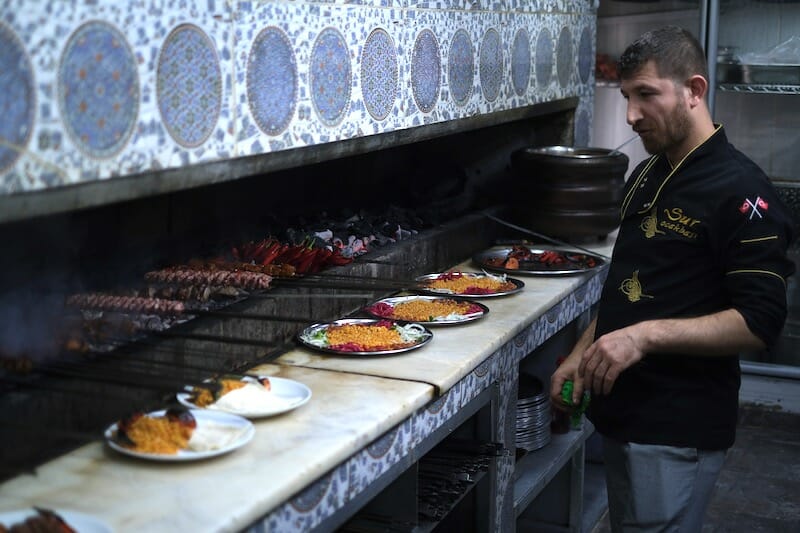 Their food reflects this other, delicious heritage. The rest of the meal transported us back to our last spring trip to Diyarbakir – our büryan tour officially at an end, but our stomachs reviving for a taste of something else.

We thought we’d already had the best içli köfte of the day before coming here. Sur’s looked humble when it arrived, a small bulgur dumpling sitting on a white plate. But when we bit into it, our mouths were filled with a range of perfectly balanced flavors – lamb, cinnamon, spicy Urfa pepper. We finished the köfte in two bites; it was perfect. Then came the lamb kebab, perfectly cooked lumps of meat, steaming and succulent. We chased it down with salty ayran, its yogurt well-fermented and frothy. 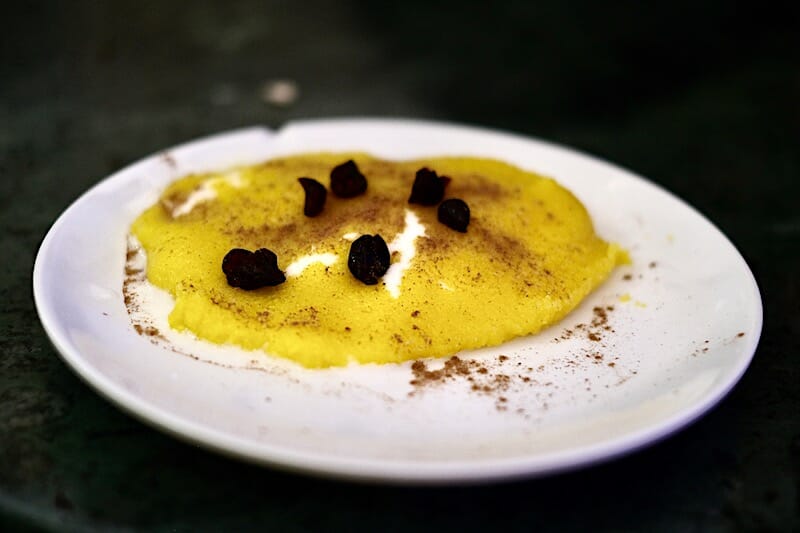 To top it all off came the mumbar, an acquired taste but one of our favorite foods. Intestines stuffed with spiced, aromatic rice and slow-cooked in meaty broth, they remind us of stuffed grape leaves – but with the added umami of meat. Sur’s version is perfectly tender, and our half portion went down, like the içli köfte, in just a couple of bites.

The highlight of the whole evening, though, was the Sur tatlısı (Sur sweet), which Hıdır insisted we try, though we were stuffed. Like the popular irmik helvası, this dessert is a sweet semolina and cinnamon dessert, but brought to the next level with mastic, saffron and dried cherries, and served with a dollop of ice cream. It’s somehow both herby and sweet, cold and warm. The only place to find it in Istanbul, Hıdır claims, is in Kadınlar Pazarı.

A trip to Fatih’s Kadınlar Pazarı is like a quick trip to Turkey’s east. Though we will never definitively be able to resolve the Bitlis-Siirt debate, one thing is for sure: We’ll be coming back for büryan again and again, and hoping we discover something new – like Sur tatlısı – at each turn.

Join our “Culinary Secrets of the Old City” walking tour to explore the traditional restaurants and food shops, including Siirt Şeref Büryan, that make up the historic Fatih neighborhood. 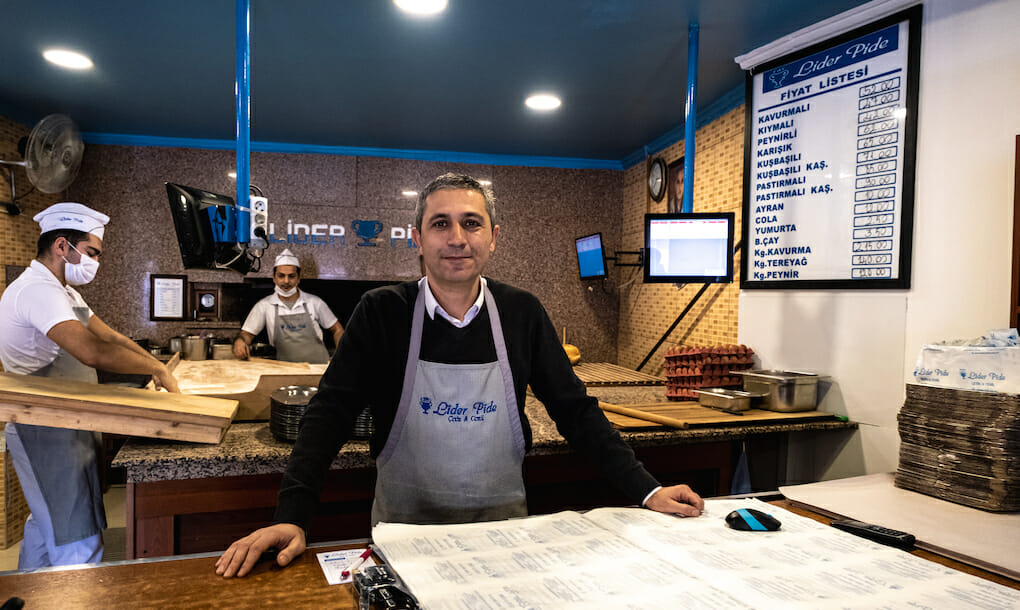 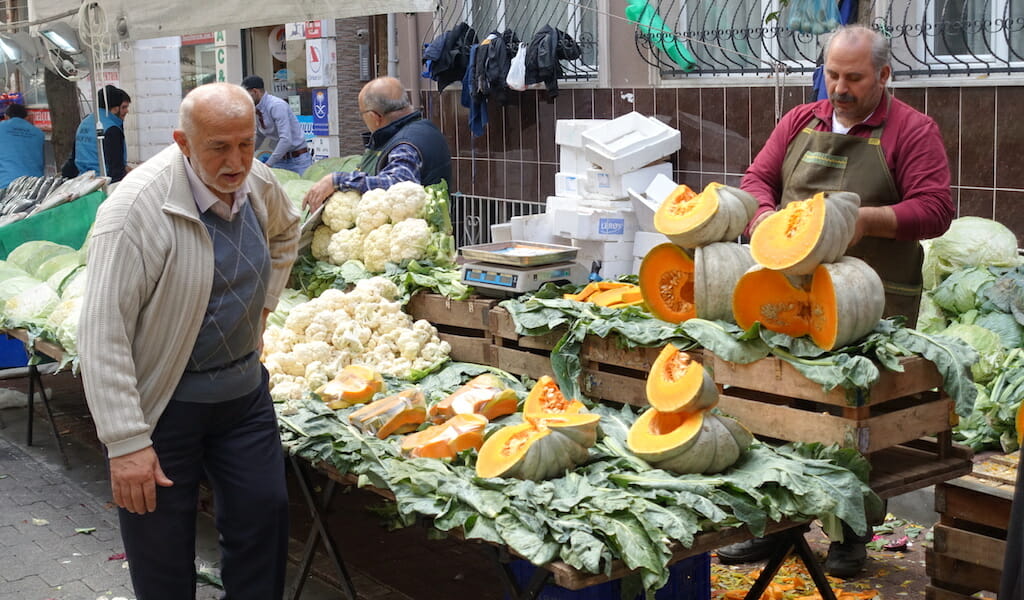 Istanbul | By Jennifer Hattam
By Jennifer Hattam
IstanbulDespite the bitter January cold, surging cases of Omicron and roaring inflation, Istanbul seemed its usual vibrant self on a recent Friday night: Our first choice restaurant was fully booked, even in its expanded space, and the new neighborhood ocakbaşı where we ended up bustled pleasantly, with every seat taken at the large counter encircling… 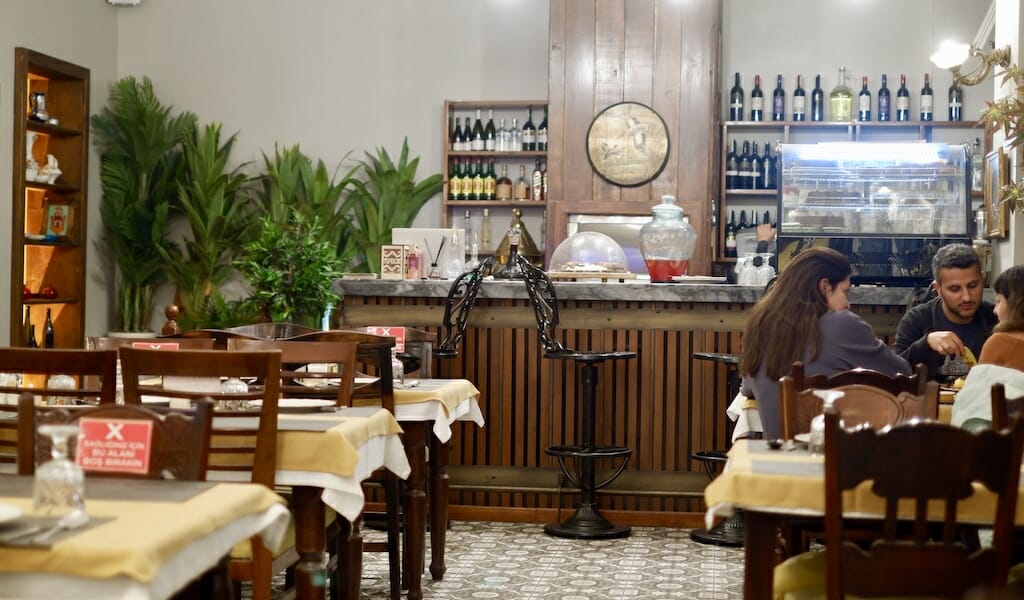 CB on the Road: Uncovering the Cuisine of Kars, Layer by Layer

Istanbul | By Paul Benjamin Osterlund
By Paul Benjamin Osterlund
IstanbulOn the fringes of the Caucasus in Turkey's easternmost corner, Kars may be the most architecturally unique city in the country. This is primarily due to the austere yet awe-inspiring Baltic-style black stone buildings built by the Russian empire more than a century ago, when it ruled the region. With a mixed population of Turks,…