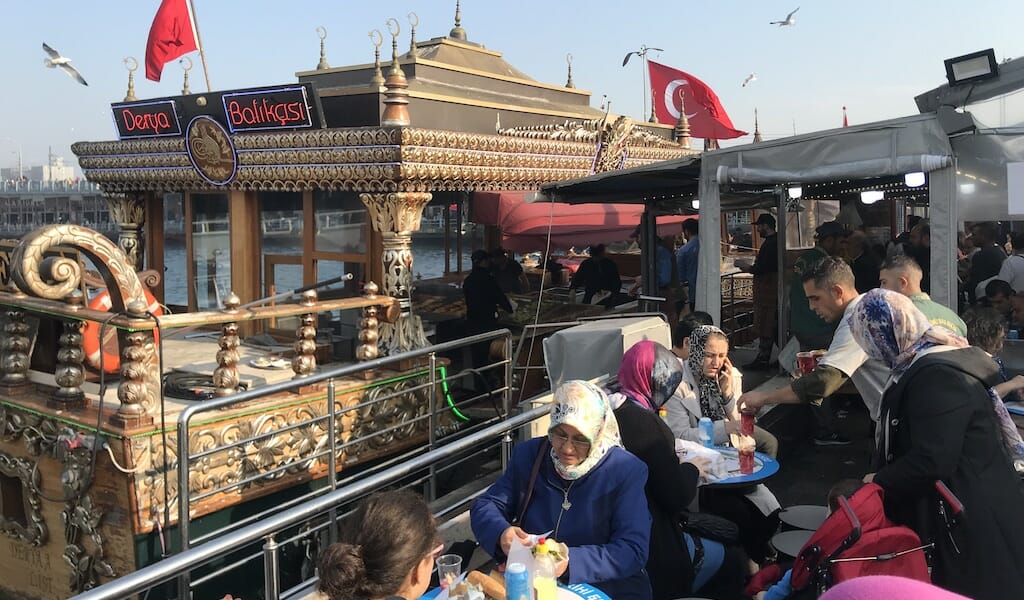 On a blustery, drizzly winter afternoon in Istanbul, Muhittin Öztürk swipes his cell phone until he finds the photo he’s looking for: three men clad in blue aprons, standing behind a grill inside a small fishing boat. “That one’s my father, that one’s my uncle,” Öztürk says, pointing at the image. “This is the culture I come from.”

Now a 35-year veteran of the business, Öztürk is the owner of the Derya, one of three gaudily adorned neo-Ottoman-style vessels moored to the shoreline in Eminönü, where a crew of cooks and waiters serve up fish sandwiches – balık ekmek (literally, “fish bread”) in Turkish – at a rapid pace to heaving crowds, most of whom are tourists. Bobbing in the Golden Horn alongside the Galata Bridge with the 17th-century Yeni Camii (New Mosque) towering behind, the boats have become a widely recognizable part of the cityscape. Since mid-October, though, their future has been in doubt.

“Eminönü’s fish-bread sellers are becoming history,” one headline in the Turkish press read after the Istanbul Metropolitan Municipality sent a notice to the three boat owners saying their leases had not been renewed, and they would need to vacate the area by November 1. An association representing the balık-ekmek sellers is fighting the eviction order; while they plead their case, the boats have continued operating uninterrupted. 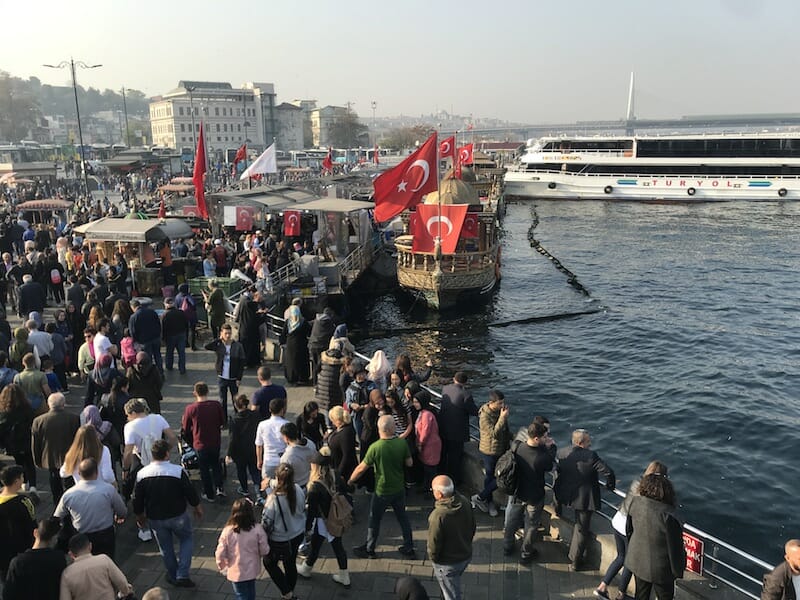 “This isn’t just a place for filling people’s stomachs, this is a global brand, part of the spirit of Istanbul,” says Arif Hikmet İlke, president of the Historical Eminönü Balık Ekmek Cooperative.

The boats’ place in history and what they represent about the city, however, are a bit more complicated than that implies.

When food writer Aylın Öney Tan was growing up in Ankara in the 1960s and early 1970s, her family would regularly ride the overnight train to Istanbul. “If we arrived at Haydarpaşa station and it wasn’t time for the ferry, we would hire a man with a rowboat to carry us and our suitcases over to Karaköy,” she recalls. “From Galata Bridge toward Sirkeci station there would be many fishermen selling their catch of the day, grilled on the boat and handed to the shore in a piece of bread, wrapped in a sheet of newspaper.”

Such scenes, immortalized in Armenian-Turkish photographer Ara Güler’s mid-century black-and-white images of small boats thronging the Golden Horn, were the milieu in which Muhittin Öztürk’s father and uncle worked. But the combination of increased regulation of the city’s shoreline and environmental changes has consigned these tableaux to the past. 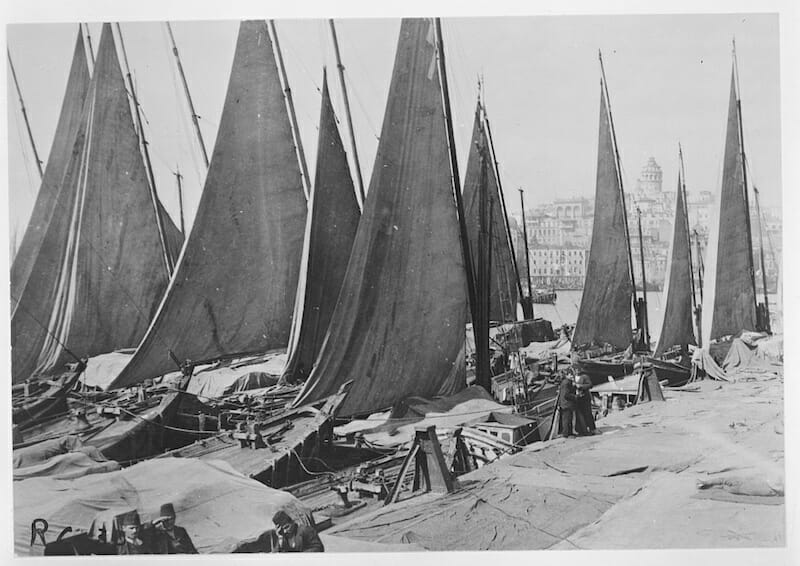 “Historical travelers wrote about what an abundance of fish Istanbul had, more than Thessaloniki or Venice or Marseille. There were even coins [in the Byzantine era] minted with images of bonito or bluefin tuna,” says marine biologist Prof. Dr. Bayram Öztürk (no relation to Muhittin), the president of the Turkish Marine Research Foundation. “But where are they today? We don’t have any more bluefin in Istanbul’s waters, and bonito has almost disappeared.”

Local populations of istavrit (horse mackerel) and lüfer (bluefish) – “a symbol of Istanbul just like the lale [tulip]” – are also both at risk, according to Prof. Öztürk, who identifies illegal, unreported and unregulated fishing, as well as pollution and climate change, as the biggest factors in the diminished catches in Istanbul’s waters.

Reduced supply means higher prices for local fish, so today’s balık-ekmek boats grill up frozen filets from Norway, which remain cheap enough to sell with some lettuce and onions inside a chunk of fluffy white bread for a mere 15 TL ($2.60).

This isn’t the first time the city has attempted to evict the balık-ekmek boats from the crowded waterfront.

The lack of local product doesn’t seem to deter customers, who come in high enough numbers to keep nearly three dozen employees busy working on each boat. The bustle has attracted a variety of other vendors – sellers of stuffed mussels, pickles, lokma (fried dough balls) and other snacks – hoping to get a piece of the action.

The tradition of street food in the Eminönü and Sirkeci area dates back centuries. But this isn’t the first time the city has attempted to evict the balık-ekmek boats from the crowded waterfront. “We encounter these difficulties every time the municipality changes hands,” says cooperative president İlke. 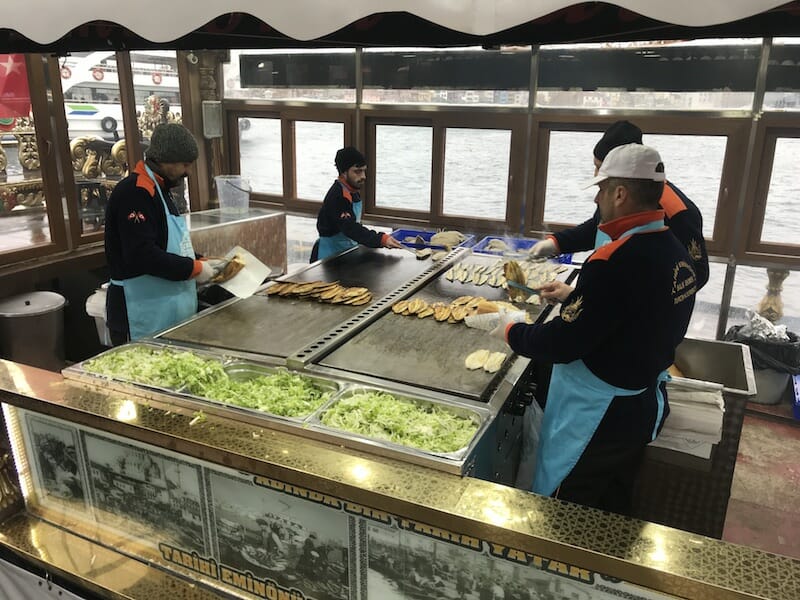 In 2004, the year that long-serving former mayor Kadir Topbaş was elected, the vessels, then numbering around a dozen, were removed following a decision by the Istanbul Governorship that said they “posed a safety risk and damaged the historical texture” of the area. After winning a new municipal tender, the current three boats were allowed to return in 2007, under more heavily regulated conditions, paying hefty lease fees to the city – and staffed with vendors wearing “traditional Ottoman clothes.”

“What started out as local has often become ‘cleaned up’ and very commercialized as part of efforts to package Istanbul as a global city over the past decade,” says Prof. Mine Eder of Boğaziçi University, who focuses on Turkey’s political economy. In the process, nostalgia for an “authentic” past becomes a valuable selling point, though the actual, messier history is often made to disappear or completely transformed – as in the much-lamented case of the Narmanlı Han on İstiklal Caddesi, a historical building plastered over and stuffed with chain shops as part of a notably inelegant “restoration.”

The Istanbul Metropolitan Municipality under Mayor Topbaş, and the ruling Justice and Development Party (AKP) to which he belongs, were heavily criticized for their top-down approach to urban planning and massive, often controversial construction and redevelopment initiatives. These included a pet project of Topbaş’s, the now-completed Haliç (Golden Horn) Metro Bridge, which drew a threat from UNESCO’s World Heritage Committee to downgrade the status of Istanbul’s historic areas due to the damage the bridge’s prominent shape would cause to the city’s famous silhouette.

Current mayor Ekrem İmamoğlu from the opposition Republican People’s Party (CHP) was elected this year in part on a promise of greater transparency and citizen participation. But when asked about the future of balık ekmek in Eminönü, the new municipality would only say in a brief statement that its plans for rearranging the square where the boats dock are broader than just removing the fish sellers and “would be shared with the public when the design stage is complete.” 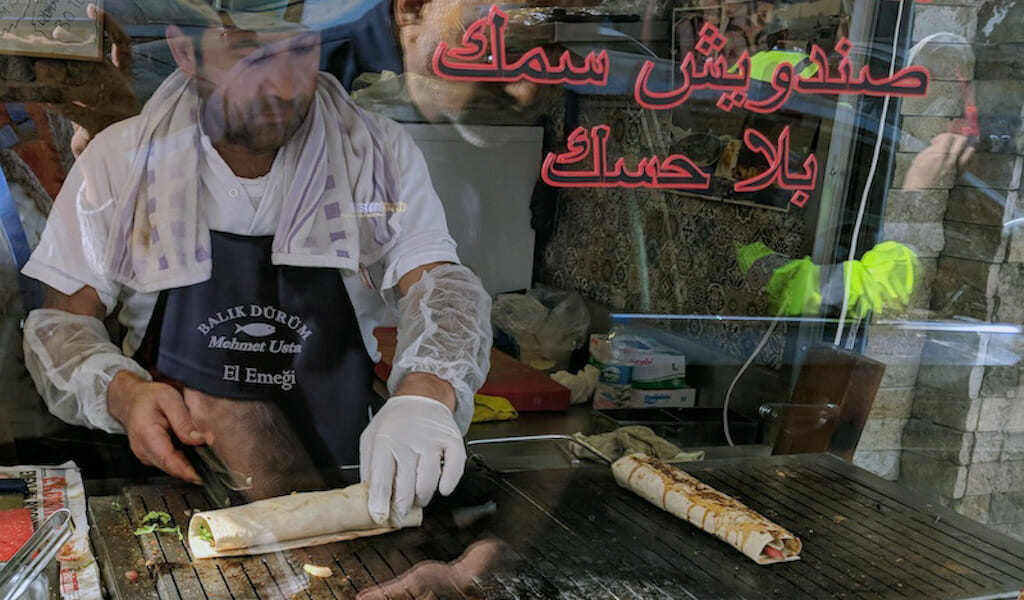 Istanbul | By Tas Anjarwalla
By Tas Anjarwalla
IstanbulThe balık ekmek (fish sandwich or, more literally, fish and bread) – an Istanbul street food staple – has lived and died and been born again along any walkable stretch of the Bosphorus. Whether you’re in the habit of buying it from the neon-lit boats docked at Eminönü’s pier (which, to the chagrin of some… 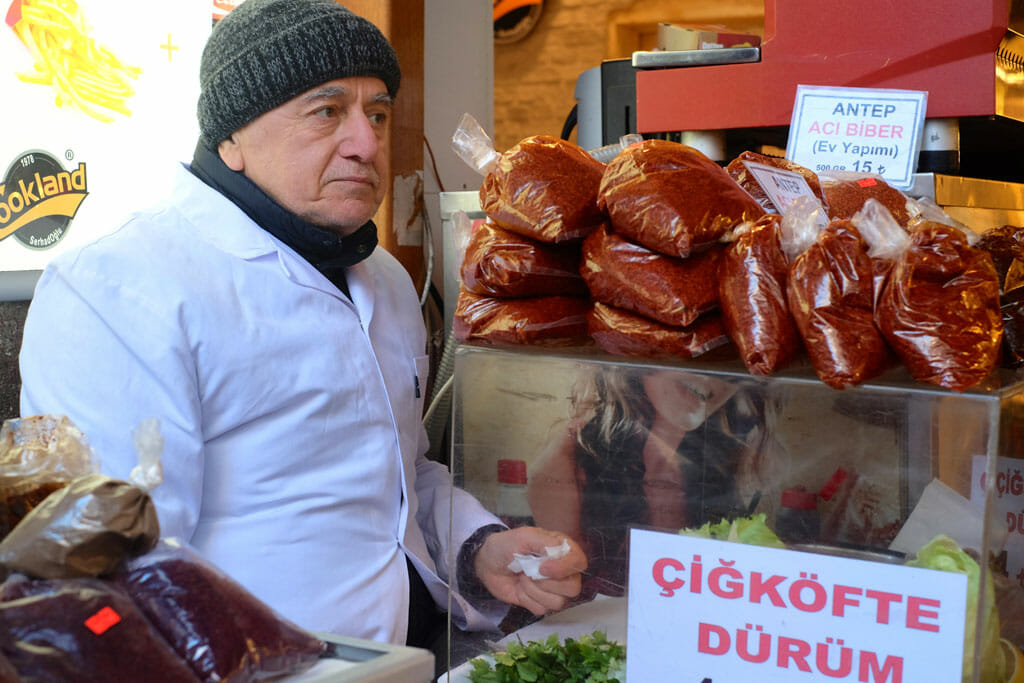 Istanbul | By Paul Benjamin Osterlund
By Paul Benjamin Osterlund
IstanbulVisitors to Istanbul's iconic Spice Bazaar encounter a place packed wall-to-wall with overzealous shopkeepers selling everything from saffron to sumac assembled in rows of majestic pyramids at slightly inflated prices. But for our money, the only spices worth a damn are found just outside in a humbler setting. Crammed behind a tiny kiosk perched in… 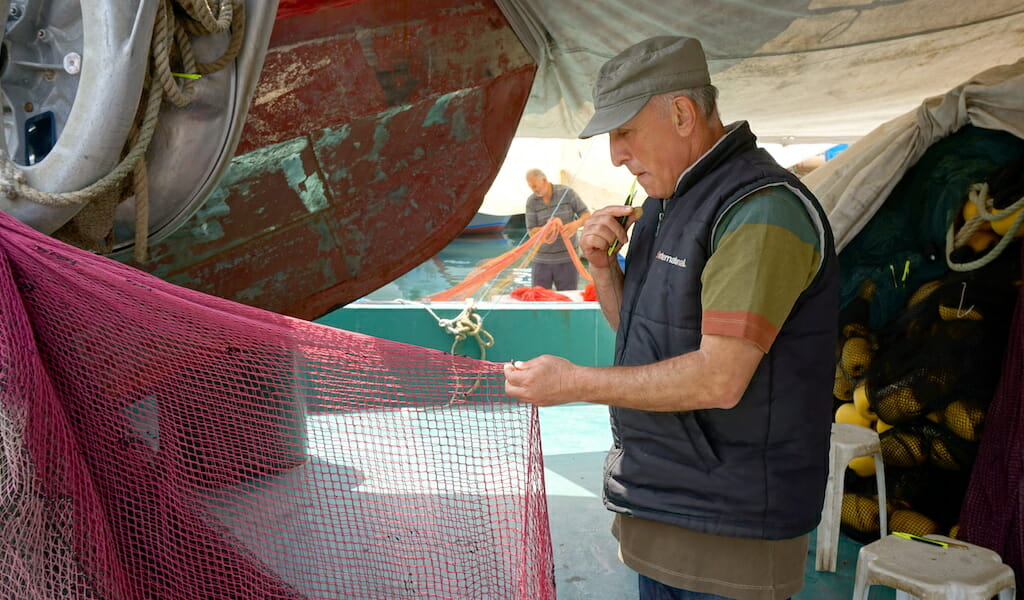 Istanbul | By Lorenza Mussini
By Lorenza Mussini
IstanbulNestled in a small cove that hides it from the nearby center of Sarıyer, not far from where the Bosphorus meets the Black Sea, Rumeli Kavağı is officially part of Istanbul yet has managed to keep the structure, atmosphere and relative isolation of a real village. The only apparent sign of the surrounding megalopolis is the…
Eminönü’s Fish Sandwich Sellers