Editor’s note: This is the fourth installment of “Spring (Food) Break 2013,” featuring our favorite foods of the spring season in each city Culinary Backstreets covers.

This year’s Nevruz celebration, an ancient welcoming of spring, may be remembered for its political significance in which a peace deal was struck between Turkish leaders and Kurdish rebels. But once the shoulder-shrugging, line-dancing, fire-jumping and ululating are over, the real bounty of the season will continue to be celebrated all over Turkey and in many Istanbul restaurants, from the chic to the shabby.

“Sultani bezelye rule!” exclaimed Şemsa Denizsel, chef-owner of Kantin, when we recently stopped by for lunch at her Nişantaşı restaurant. Like a favorite uncle in town for the holidays, these sugar snap peas brightly decorated one corner of the plate that held our bahar salatası, a simple “spring salad” that featured all our favorites of the season, including chunks of artichoke hearts and vividly green fava beans. The artichoke pilaf was another March love letter, but the darling of our spring fling at Kantin was a soup of chicken stock and broad beans (aka fava beans). This homey, country-style soup hit a note on our palate that Turkish food rarely finds. In a rush, memories of fresh-from-the-garden meals eaten throughout the American South pleasantly accompanied this bowl of soup down to the last drop. Although it was not on the menu when we went, Şemsa promised she would soon be serving one of our favorites, the delicacy kokoreç, grilled intestines of spring lamb. 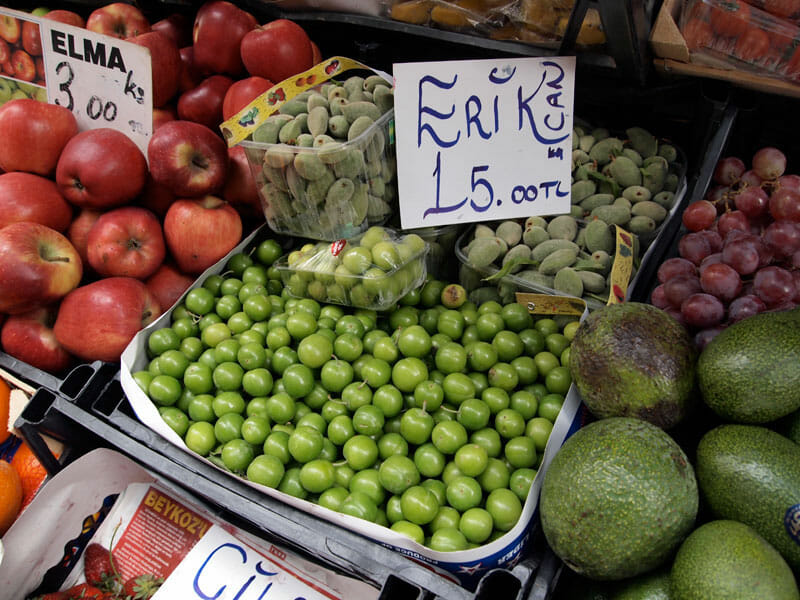 Later in the spring, a couple of tart fruits tend to make all-too-short appearances on the Çiya menu. Yeşil erik, or bracingly tart unripe green plums, are incorporated into meat stews. The loquat, known as yenidünya (“new world”) in Turkish, has an exceedingly short growing season but is a real treat. Çiya is one of several kebab houses in the city that make yenidünya kebabı, featuring pitted loquats that are stuffed with ground meat and then grilled on a skewer until the fruit turns tangy and jam-like, serving as a perfect counterpoint to the fatty meat.