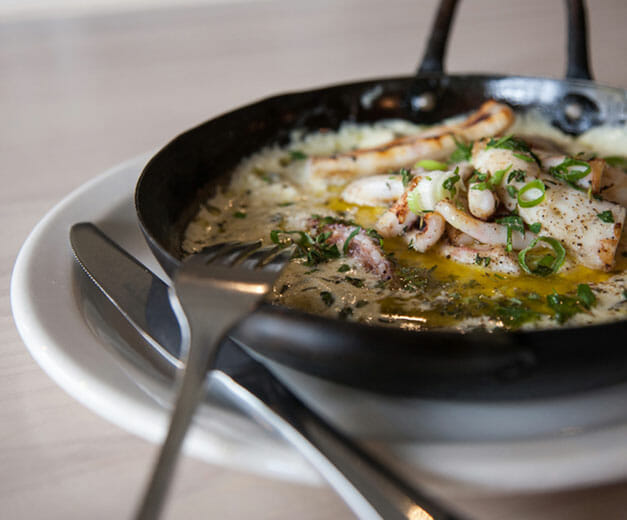 Diaspora Dining: Greek Flavors Down Under

Greeks have been gravitating towards Melbourne, nestled in the southeastern corner of Australia, ever since the gold rush of the 1850s. The Greek Orthodox Community was formally founded in 1897, and the first Greek language newspaper, Australis, was issued in 1913.

But it was in the 1950s and ’60s, as the consequences of the civil war continued to be felt in Greece, that they really immigrated in earnest, coming in the thousands. Today Melbourne boasts the largest population of Greeks outside of mainland Greece, and the world’s third-largest Greek-speaking population after Athens and Thessaloniki.

Everyday Melbourne life is infused with a healthy serve of Hellenic culture, from the sounds of Greek being spoken on the streets, to the Greek script adorning shop windows and signs in suburban enclaves like Oakleigh and Thornbury, to the black-clad yayas (grandmothers) searching out the freshest produce at the local markets.

And the food – oh, the food. Melbourne excels at keeping its populace well fed and watered, and there’s no shortage of sustenance from every corner of the globe to keep our tastebuds happy, including, of course, Greek restaurants and cafes. They range from upmarket places, where celebrity chefs execute modern interpretations of traditional Greek food, to tavernas, where meze and ouzo are the order of the day and where it’s still possible to see old Greek men sitting out front, smoking cigars and playing endless rounds of backgammon, to cozy family-run outfits, where families and friends – both Greek and non-Greek alike – catch up. 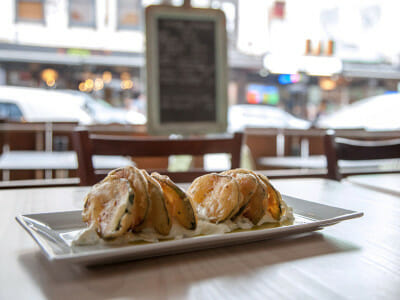 Since 1995, Lazaros and Vicki Thomaidis and George and Flora Karanikos have been serving up home-style Greek lunches and dinners seven days a week at Pireaus Blues, their restaurant in Fitzroy, a gentrified northern suburb of Melbourne. It’s a bona fide family business. “Initially, our food reflected the parts of Greece that our parents came from,” Lazaros says. “We’ve had both our mothers in here! We still serve dishes that we used to enjoy as children, like the braised kid goat with lemon and potatoes. But now, we’re more open to different areas, to provincial cooking. We try to get the best from all over.”

Outside Pireaus Blues tables and chairs line the pavement. A wooden stepladder strung with dried herbs decorates the doorway, and a specials board advertises the best of the day’s fare. Inside, a hearth adorned with more herbs and a bouzoukia, or Greek lute, hints at the live musicians that sometimes settle in for an evening.

Upstairs is a functions room, complete with its own bar, that can seat up to 120 people for weddings, bar mitzvahs, birthday parties and the like. Once upon a time people were allowed to smash plates up there, but not anymore – Australia’s health and safety legislation has vetoed the Greek tradition. So partiers must be content to push back the table and chairs and dance instead.

Like all good businessmen, Lazaros and George have an eye on the market, and over the years they’ve seen Melbourne’s eating interests shift from menus to specials boards, and individual dishes to shared ones. Now, they’re catering for an increased awareness of food sensitivities and – like on menus the world over – a rise in the popularity of vegetarian dishes.

“Traditionally, Greek food is seafood and veggies from the garden, things we’ve grown, like broad beans and artichokes, zucchini and tomatoes. We’ve always had vegetable dishes at Pireaus Blues,” says Lazaros, “we’re just promoting them a lot more. We do a great vegetarian banquet.”

In late 2012 they renovated the restaurant and brought in a new chef from Kalamata in the south of Greece, Giannis Koumannis. “Giannis designs the menu, and his ethic is that it’s got to be fresh, it’s got to be daily. He goes to the market and sources fresh produce and herbs,” says Lazaros.

The week I visit, Giannis is doing a crumbed cod served with horta – fried greens.

Of course, Pireaus Blues does a great trade in beautifully cooked meat dishes too, like the biftekia, marinated and grilled beef rissoles served with lemon potatoes and pita, and – for the real meat lovers – the mixed grill: a lamb cutlet, lamb souvlaki, chicken souvlaki, beef rissole and lemon lamb, served with a salad of fresh tomato, cucumber and feta drizzled with olive oil and vinegar.

And there’s a smattering of sweets to sate even the most voracious sweet tooth, like the loukoumades, doughnuts served with honey, cinnamon and crushed walnuts, and the halva ice cream, sesame seed and cocoa candy blended with vanilla ice cream.

A first-generation Greek-Australian, Lazaros was born in Melbourne to parents who arrived in the late 1950s. But the story behind the restaurant’s name is embedded in a tale from the generation before. Pireaus is the ancient port of Athens. Today, it’s the city’s major port for locals and tourists coming and going from the Aegean Islands and beyond, to Cyprus and the Middle East. 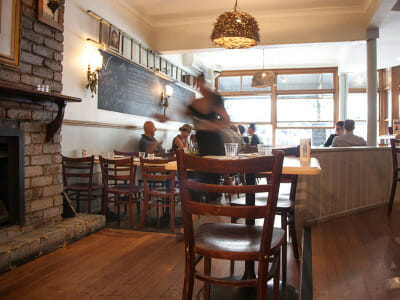 For Lazaros’ paternal grandfather (whom he is named after), it was a place of arrival, and displacement. The grandfather was a Greek Orthodox Christian born in Turkey when it was a Hellenic country, Asia Minor. Then the Geneva Convention of 1923 decreed that anyone of Greek Orthodox background had to leave Turkey, and anyone of Muslim background had to leave Greece. “His family had been living in Asia Minor for a long time; it was their homeland,” Lazaros says. “But my grandfather and his family got rounded up. They lost all their possessions; they got put on boats. They arrived in Athens, at the port of Pireaus. But they had no Greek; they just had their own dialect. They couldn’t mix in with the locals very well. So they created a culture of blues clubs, and they sang the blues – the Pireaus Blues – to remember their homeland.”

But if the story behind Pireaus Blues is a touch bittersweet, the atmosphere is anything but. “Family dining in Greek tradition – deipnos is the word we use – is a gathering of people to sit and discuss and enjoy and share,” explains Lazaros.

“Deipnos is about Mum putting food on the table and everyone sharing. We get together and talk about our days. Hellenic culture is all about food and family; food keeps the family unit revolving.” 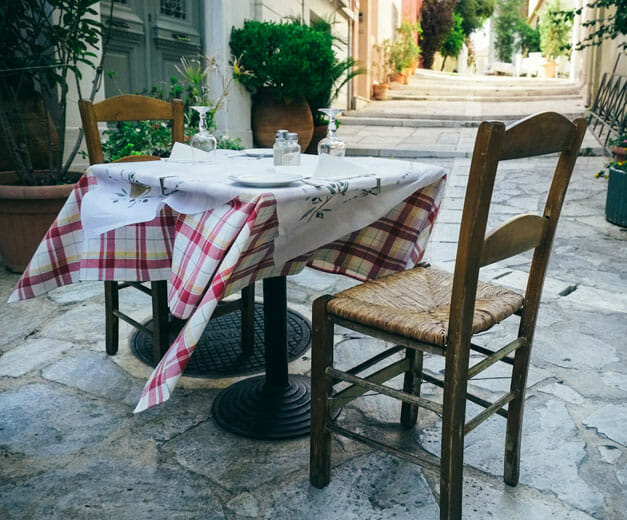 Athens | By Despina Trivolis
By Despina Trivolis
AthensWhether you are arriving in Athens by ship or airplane, both the port and the airport are near enough to be able to venture out and enjoy a little bit of the city if you have at least a few hours. The airport is 35 to 40 minutes by metro from downtown Athens (but be sure…

Istanbul | By Istanbul Eats
By Istanbul Eats
IstanbulEditor’s note: We are sad to report that SofrAda has closed. If it’s because of showing visitors around or simply a desire to get away from the city for the day, we can usually count on at least one visit a summer to Büyükada, the largest of the Princes’ Islands. But as much as we…
Select your currency
USD United States (US) dollar
EUR Euro