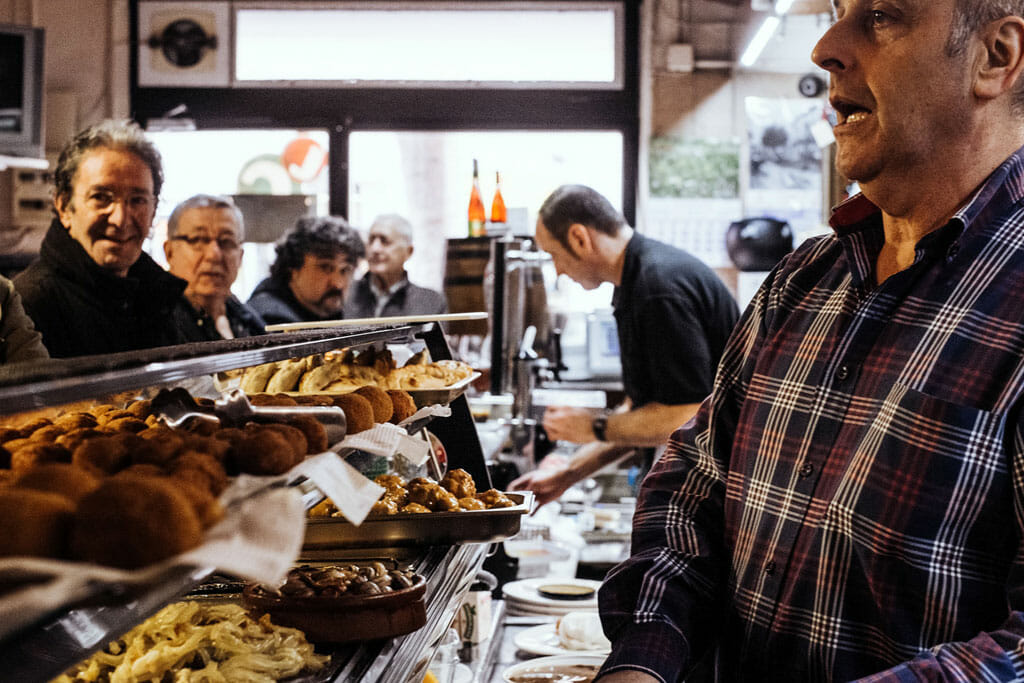 Behind Bars: History, in Bulk, at La Bodega d'en Rafel

When Edu, owner of the Barcelona wine bar Celler Cal Marino, was growing up in the 1980s in the neighborhood of Sant Antoni, he would confuse Rafel Jordana with the iconic German soccer player and coach Bern Schuster (“Schuster is in the bar, Daddy!”). Jordana, owner of the bodega that bears his name, is not so famous internationally, but he is undoubtedly one of the icons of Sant Antoni and of the old-school bodega-bar culture in Barcelona.

La Bodega d’en Rafel has served as a location for a number of films and television series (such as “Cites,” the Catalan version of the British show “Dates”), a subject of many articles and profiles and an important touchstone for a larger community that connects Barcelona locals with their identity.

If there’s one thing that characterizes La Bodega d’en Rafel – besides good cava, local wine, a well poured beer and the comforting traditional tapas – it’s the power that the team here has to make you feel at home, feel that you belong – that there will be always a place for you at the bar. 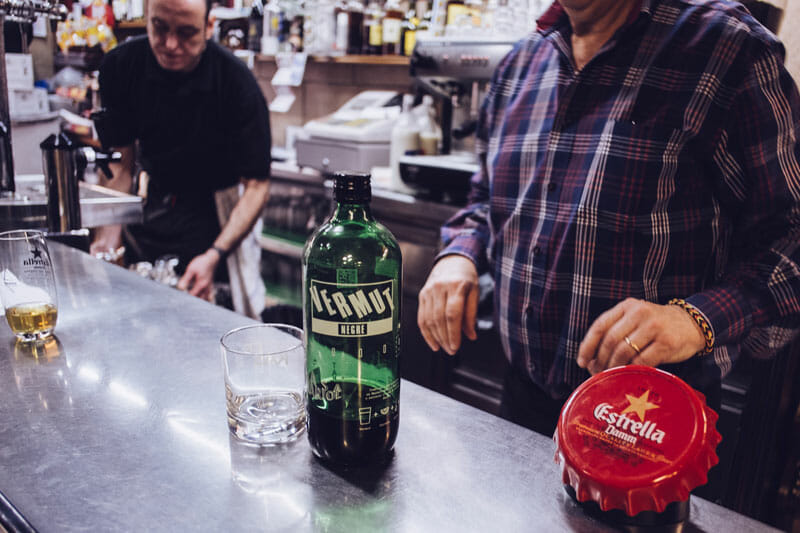 The origins of the bar are hazy, although this beloved bodega has seemingly always been a neighborhood institution, situated as it is between a big market, the old “red light district” of El Raval and the theaters and cabarets of Paral·lel. Some elderly neighbors say that the place was a high end restaurant during the Spanish Civil War (1936-1939). Evidence of this can be found in the amazing, irreplaceable old tiles on the walls that are hand painted as was once done by Valencian master artisans. These depict scenes from Miguel de Cervantes’s Don Quixote. Jordana claims that these tiles could be 80 to 100 years old.

Sometime in the 1950s, the restaurant began its evolution towards becoming a bodega, which, in Barcelona, is a combination of tapas bar and bulk wine shop – though most of all, it is the beating heart of the neighborhood. As La Bodega del Pau, it was well known as the headquarters of Los Castizos, the amateur choir of the Sant Antoni Market fishmongers, which used to meet there to drink, sing and generally mess around together.

In 1962, José García Jiménez, a native of Andalucia, came here with his wife from the Catalan village of Batea in Terra Alta, which is known for bulk wine production. He took over the bodega, changed the name to Bodega Terra Alta and ran it until he died in 1987. Jordana, who had previously been working in advertising, was by then married to Jiménez’s daughter, María, a nurse who sometimes also helped out in the bar. When Jordana took over, he updated the bar, refurbishing it a bit and moving the wine from old wood barrels to less charming but more sanitary plastic ones. He also improved the food offerings and the kitchen and updated the name in 2003. His idea had been to name it after the village of his birth in the Pyrenees, but María, who knew better than anyone the significant role he played in the bar, said, “No dear, the bodega has to take your name.”

Jordana, smart guy that he is, noticed how the neighborhood was changing before and after the Barcelona Olympic Games in 1992. Drinking habits were shifting from bulk table wine to more refined bottled wine – some with a protected designation of origination, some labeled by varietal – that customers would order by name. Instead of ten intense domino and card games each day, customers might play just one or two games on occasion, and the noisy gambling machines, so popular in the 1980s, began to gather dust in the corner. As for the customers themselves, the market stall vendors, car mechanics and blue-collar workers gave way to hipsters, musicians, journalists, writers and film industry professionals from all over the city who nowadays share tables and the bar with old parishioners, retired workers and young locals. 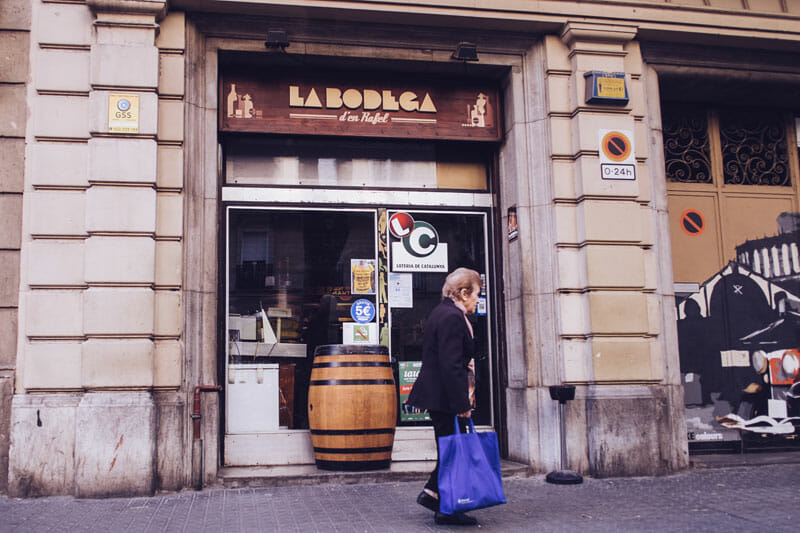 The only thing that remains unchanged – besides the Don Quixote tiles – are the classic tapas Rafel serves, such as mushroom, octopus or cod croquettes, esqueixada (a salad of cured cod and fresh vegetables), the house specialties cap i pota (cow’s head and leg) and callos (tripe) stews, Olot potatoes stuffed with pork and beef and the omelets. And while the vermut ritual has waxed and waned and evolved in the city, Rafel has long offered a good house vermut and all its beloved canned, marinated or pickled accompaniments (anchovies, cockles, olives, etc.).

As Rafel says with a smile, “This bodega is like the Rolling Stones: if you keep singing and doing concerts for so long, perhaps it’s because you’re not so bad at doing your thing.” 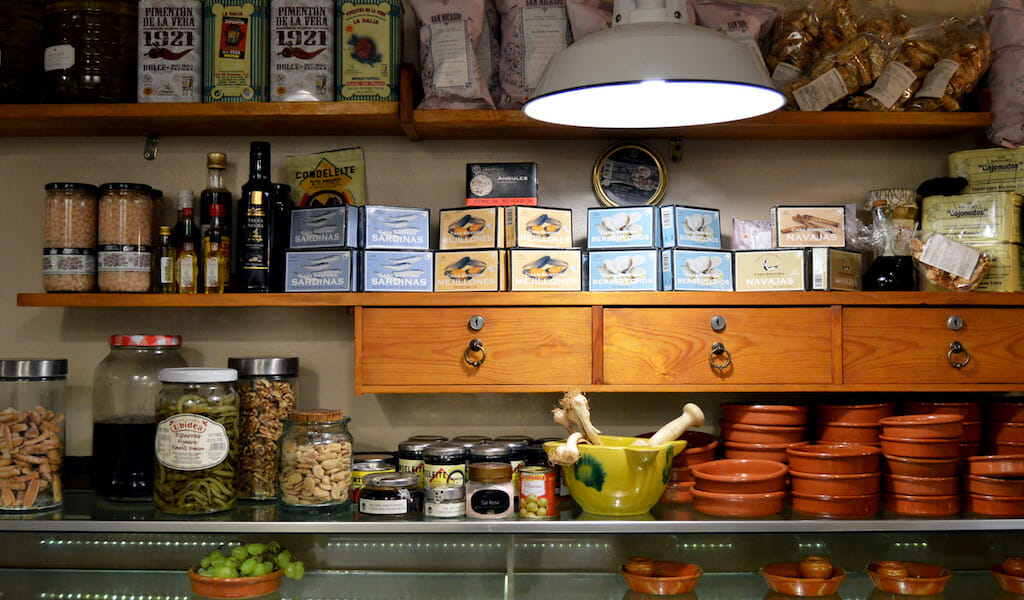 Barcelona | By Paula Mourenza
By Paula Mourenza
BarcelonaAs the food scene in Barcelona continues to change at a rapid clip, with a constant stream of closings and openings, the city’s bodegas are an excellent example of what can be saved. These are businesses that have been updated again and again, sometimes over the course of a century, in order to preserve an… 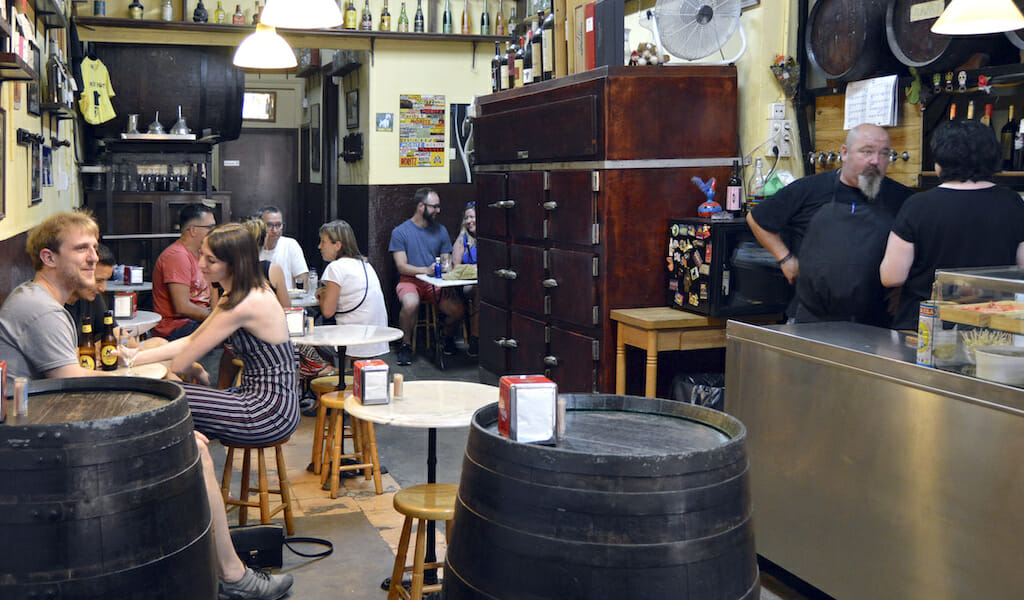 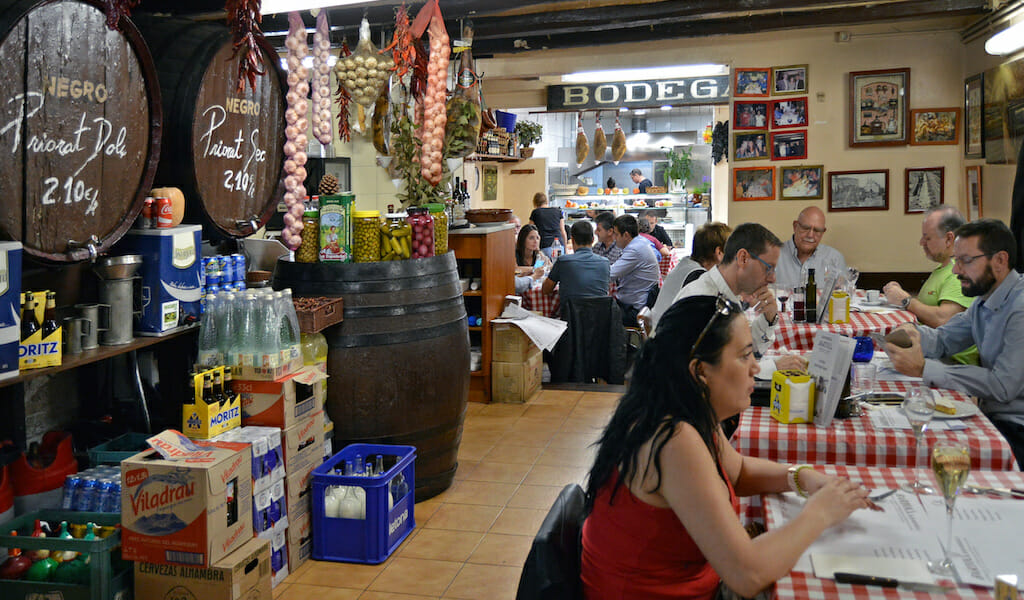