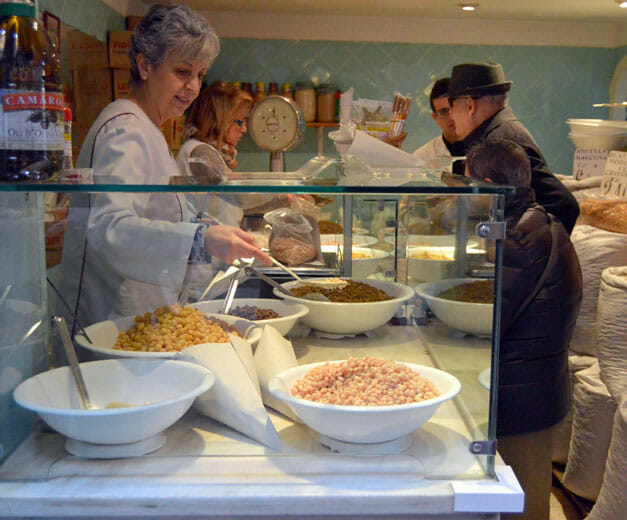 Known in Catalan as mongetes – “little nuns,” as Catalonia’s oldest kind of beans resemble the pale face of a nun in her black habit – or fesols, from the Latin phaseolus, beans are an integral part of the region’s culinary traditions. If Catalan home cooking could be represented by a single dish, it would be butifarra amb mongetes, peppery pork sausage which is either grilled or fried and served with a little mountain of delicious beans: simple, filling and soul-warming. But in Catalonia the number of dishes made with legumes is infinite. In fact, many local restaurants offer a choice of beans or potatoes to go with all manner of seafood or meat preparations, from chicken to pork or veal, or from cod to squid or sardines. 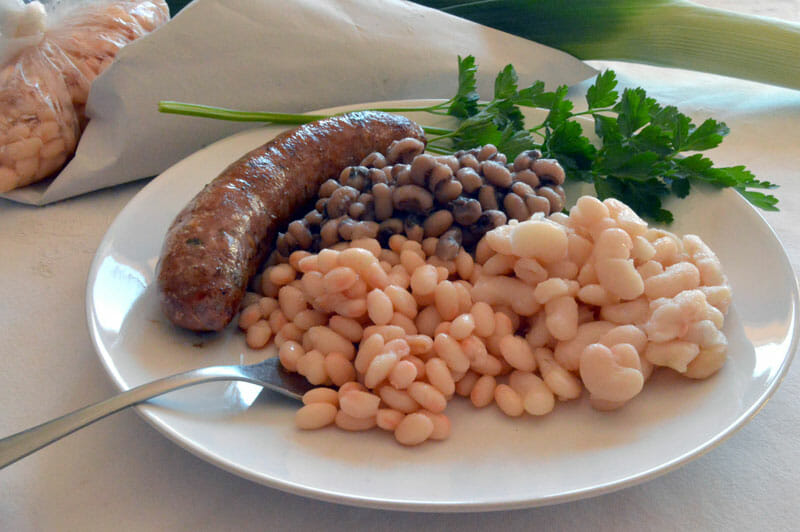 More than in any other Spanish region, legumes are an important everyday staple in Catalonia. Consequently, their cultivation is a serious undertaking here, producing some of the country’s most exquisite specimens, like the two DOP (Protected Designation of Origin) varieties, Mongeta del Ganxet and Fesol de Santa Pau. The kidney-shaped Ganxet bean is delicate and white, with very thin, slightly rough skin and a creamy texture. It’s grown in Western Vallés, Eastern Vallés, Maresme and La Selva. Many traditional restaurants serve Mongetes del Ganxet; they’re perhaps the most used legume in the region. Produced only in the volcanic soil of La Garrotxa, the Fesol de Santa Pau is smaller but also kidney-shaped and white, with smooth skin and a soft, velvety consistency. It’s a favorite of many chefs.

Almost all the varieties of beans in Catalonia are Phaseolus vulgaris, which came from the New World in the 16th century and now is the most common species cultivated worldwide. But there are some notable exceptions, such as Vigna unguiculata, the cowpea, which originated in Africa and which the Romans, who knew it as fasiolum, cultivated in Spain long ago. In Catalonia, cowpeas are known as fesolets, fesolís or fesol d’ull negre (“black-eyed bean”), for their distinctive black markings. They have a strong yet still delicate flavor. The Catalan gastronomy scholar Jaume Fàbrega believes this legume inspired the “little nun” name that is now used as a general term for beans. But these cowpeas also go by many other colorful names, such as caragirat (“twisted face”), escurça-tites (“short tits”) or sabateta de puta (“little prostitute shoes”). Once upon a time, they were even considered aphrodisiacs for women in some rural areas. Fesolets are often cooked with butifarra, but in Costa Brava, the Catalan northern coast, they are typically also served with grilled, marinated or even confited sardines or anchovies.

Legumes are important elsewhere in Spain, though they may not appear as frequently and in so many dishes as they do in Catalonia. The autonomous community of Asturias, in Spain’s northwest, is known for fabada, a stew made from the variety judión de la granja (Phaseolus loccineus L.), which is traditionally cooked in a clay pot with chorizo and bacon. The mongeta de Lima or garrofó (Phaseolus lunatus L., lima or butter bean) is common in Valencia, where it’s one of the traditional ingredients in paella and rice soup. And the cowpea features in many stews in Extremadura and Castilla León, in western-central Spain. 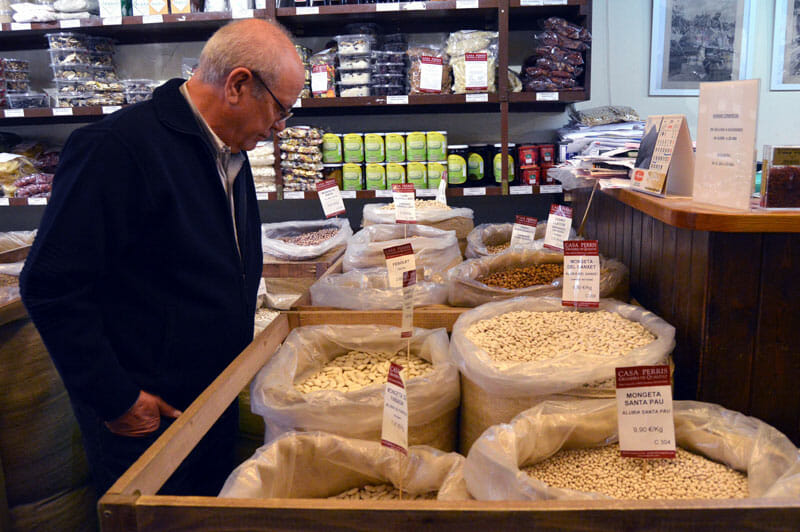 In Barcelona, beans are very easy to find in all kinds of food shops and supermarkets, but the most traditional and local way to buy them is in bulk at special shops and market stalls, where you can find a number of varieties in dried form or already cooked and ready to be incorporated into whatever you’re cooking at home. These prepared legumes are really characteristic of Barcelona and speak perhaps to just how important they are as an ingredient in the Catalan larder. They make it that much easier for the home cook to get them on the table, perhaps fried for a couple of minutes in a pan with olive oil and onion or leeks (we especially love beans with caramelized onion!), especially since dried beans often require an overnight soak and lengthy cooking time. Wherever these prepared beans are sold, you’ll see the sign “Llegums Cuits” (and of course, there’s a shop with that very name, included in the addresses above). 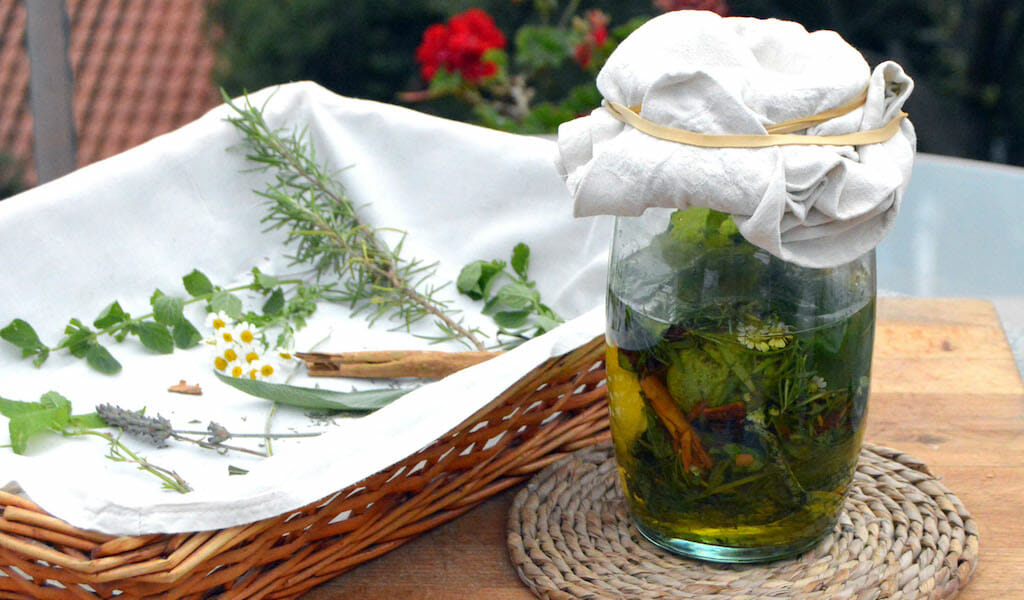 Barcelona | By Paula Mourenza
By Paula Mourenza
BarcelonaIn Catalonia around the summer solstice, we make one of our most traditional liqueurs, ratafía, for which the herbs, fruit and flowers that are macerated in alcohol must be collected on Saint John’s Eve, or June 23. This highly aromatic digestif has long been believed to have medicinal properties. There’s even an old Catalan rhyme… 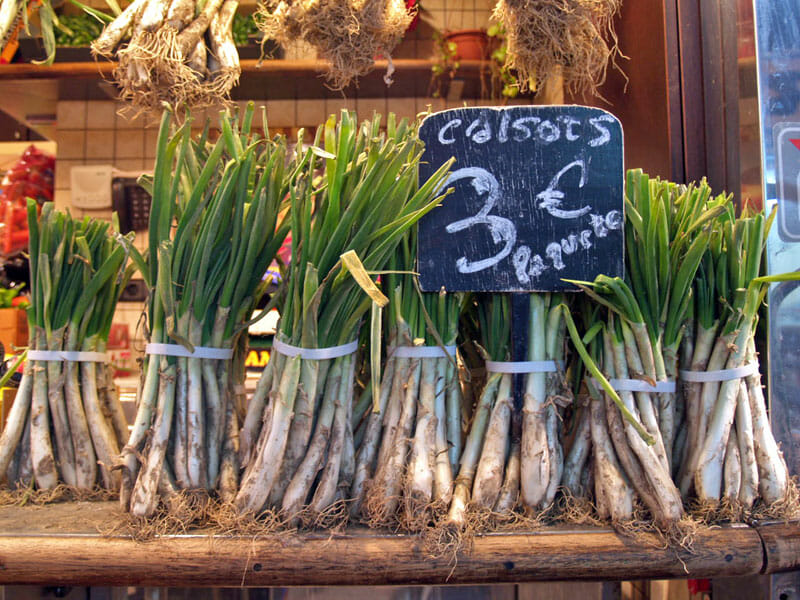 Barcelona | By Paula Mourenza
By Paula Mourenza
BarcelonaAs the legend goes, a 19th-century Catalan farmer was out experimenting in his fields when he came up with a new kind of longer, juicier green onion, the calçot. In creating the onion, the farmer produced much more than a new vegetable; he also paved the way for the rise of an idiosyncratic, and distinctly…

Add to favorites
Where to Eat Beans in Barcelona