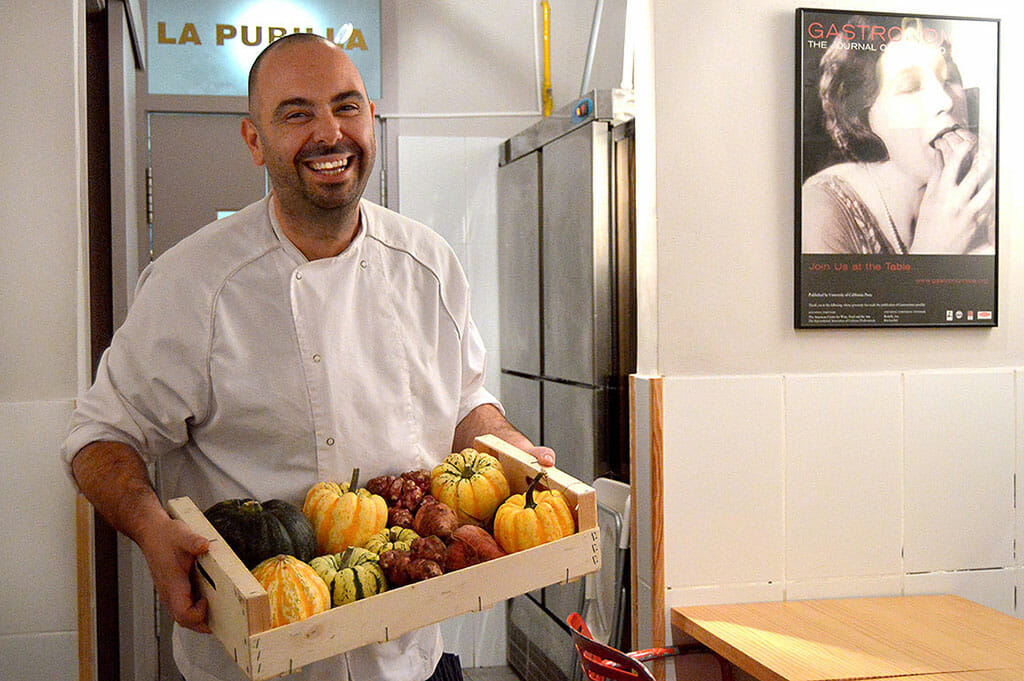 When chef Alexis Peñalver was looking for a location to open La Pubilla last year, he found this gem adjacent to el Mercado de la Llibertat in Gràcia and decided to keep the name of the original establishment. Pubilla is a bygone word in Catalan for the eldest daughter destined to receive the family inheritance in the event that there were no male heirs. Nowadays a pubilla (the prettiest girl in town) is named reina de la fiesta at many festivals in Catalonia.

Proudly Catalan, La Pubilla is our go-to restaurant in Barcelona for a menú del día. Here you won’t find a menu in Spanish or English, only Catalan. This was by design, not only to facilitate seating and ordering, but also to encourage patrons to have a tableside dialogue with the affable staff, commandeered by Dídac Pellicer.

Dídac (Diego in Catalan) probably greeted you on the way in – benvinguts, bon dia/bona tarda, com estàs – wearing his signature white-knit Kangol cap. A cook himself, Dídac used to work with chef Alexis at Casa Juliana, where the two met. They decided to open a restaurant together whose focus would be authentic Catalan market cuisine.

Part of the gastronomic adventure of eating at La Pubilla is being open to surprises. Since our Catalan vocabulary consists of about four words, none of which is for food or ingredients, we don’t get bogged down trying to translate every single word on the menu. We get the gist of things, point at what we feel like ordering and wait for the kitchen to do the rest. One bit of advice is to err Catalan, so if you’re deciding between, say, botifarra and a hamburger, go with the local sausage. Likewise, faves (beans) would be a better bet over a salad. Of course feel free to steal a glance at your neighbor’s plate and belly up to a hamburger and salad if the mood hits – because one thing you can always count on at La Pubilla is that everything coming out of chef Alexis’s kitchen is molt bo.

Lunch at La Pubilla begins with twenty-six or so Arbequina olives, hinting at more local ingredients to come. On a recent visit, our first course, saltat de coliflor amb ibèric i alls tendres (sautéed cauliflower with jamón ibérico and tender garlic), was heaven-sent. The cauliflower was delicately sautéed with bite-sized pieces of jamón ibérico, garlic and green onions that confirm that chef Alexis is a master at preparing and proportioning ingredients. Raise your hand if you like meat dripping off the bone: ¡Si, señor! Our second course – galta de porc amb patates enmascarades (pork cheek with potatoes) – was like a master’s course on how to perfectly cook pork. The side of potatoes that accompanied the pork was spectacular, albeit simple. For anyone keeping score, the dish was a perfect ten.

For dessert we grinned ear-to-ear while spooning a homemade compota de poma i codony (apple compote and quince jelly). Sometimes desserts can and do fall flat, especially with menús. At other times, however, dessert provides an exclamation point to a perfect meal.

Lunch reservations are required during the week. On Saturday, the format changes from menú to à la carte. Offerings are still knife and fork, but the atmosphere is more relaxed and the pace is slower. Picture yourself reading El País unhurriedly over a café con leche versus sharpening your elbows to squeeze in for lunch during the week.

We wish we could eat at La Pubilla every day, which is the highest compliment we can pay chef and owner Alexis. His play on comida Catalana de toda la vida is an estrella in one of the quintessential barrios of Barcelona. This city, and Gràcia in particular, could use more local gems like La Pubilla.

Barcelona | By Hollis Duncan
By Hollis Duncan
BarcelonaEditor's note: During the dog days of August, much of the city of Barcelona - including many dining establishments - shuts down for an extended vacation. We're happy to rerun this review of La Pubilla, one of our favorite Catalan restaurants, which remains open this month. When chef Alexis Peñalver was looking for a location… 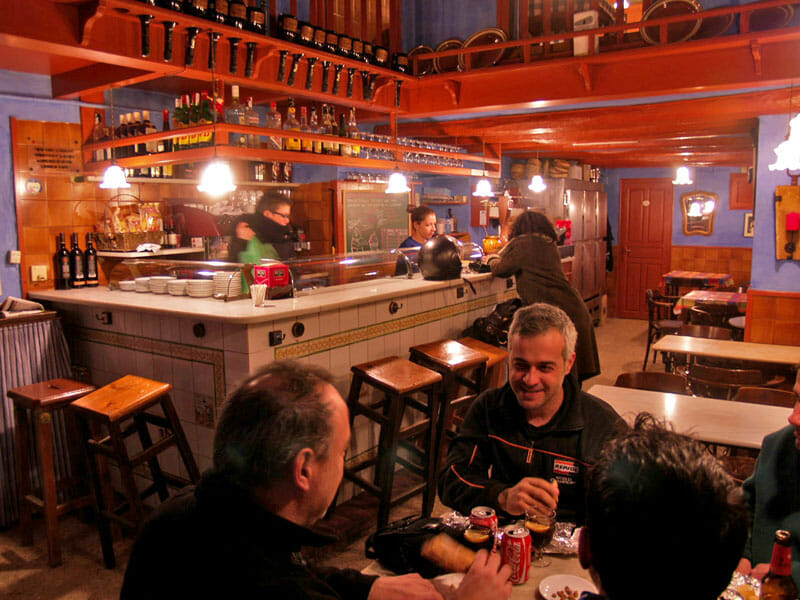 Mercè Vins: Home Away from Office

Barcelona | By Paula Mourenza
By Paula Mourenza
BarcelonaMercè Vins is exactly between two worlds, located on the quiet, narrow and dark Carrer d’Amargós, close to the shopping area of Portal de l’Àngel, near the Cathedral and Plaça de Sant Jaume, and on the border between the Barrio Gótico and Born neighborhoods, where there are numerous offices and public institutions, filled with employees…