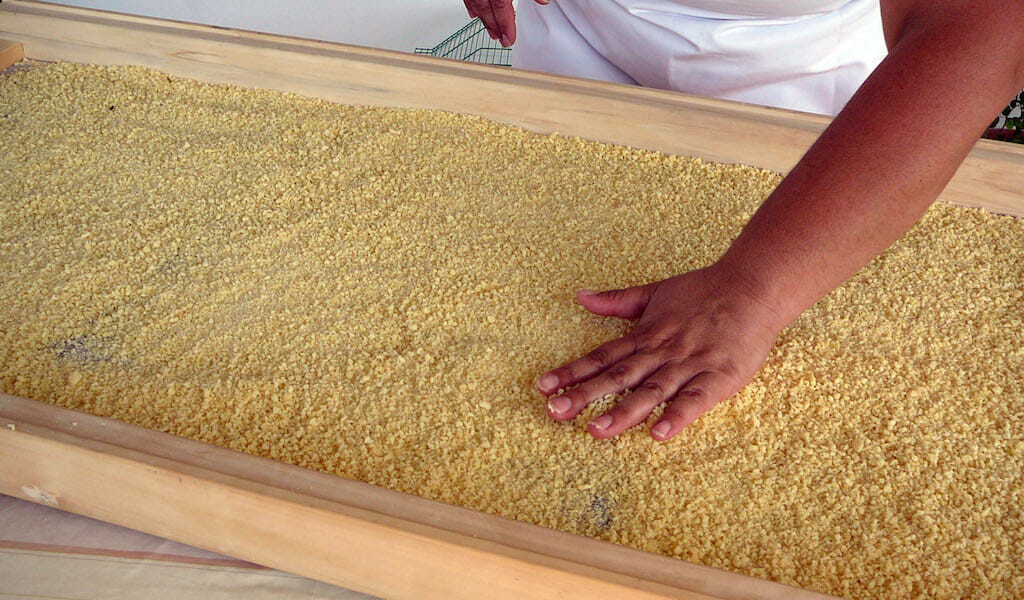 You might not have heard of trahana, sometimes called rustic pasta, if you don’t possess a Greek grandmother. This humble food rarely turns up in tavernas, yet it is a staple, especially in the winter months, and the basis of many a comforting meal. In fact, it may just be the world’s first instant soup.

Trahana, which is most often seen in small couscous-like pellets, represents a synthesis of wheat and dairy, making it more nutritious and tastier than ordinary pasta. Its flavor and consistency depend on whether the flour, semolina or cracked wheat is kneaded with milk, soured or fresh, or yogurt. Traditionally, the mixture would be shaped into balls or patties, dried in the sun until hard, grated into tiny granules, dried some more, and then stored in cloth bags, where it would keep for months, even years. To eat it, all one had to do was add it to some boiling liquid, let it soften and serve, as a kind of porridge or soup, for a warming, filling breakfast or supper. 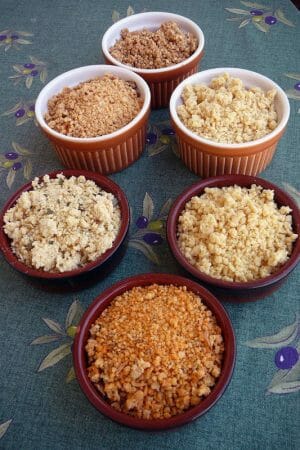 The origins of this clever way of processing two such fundamental foods into a portable, easy meal go back to antiquity. And as is usual in this part of the world, several cultures claim its invention, for it is beloved across a huge geographic swathe, from Central Asia to Turkey, Romania, Albania and Iran, where it is variably called tarhana, tarhonya, trachanas and tarkana as well as the Greek trahana. Was it the gruel Roman armies marched on or something Turkish tribes packed into their saddlebags as they rode west? Possibly both, but it does seem certain to have emerged from a pastoral tradition, with nomadic shepherds coming up with an ingenious solution for preserving their excess milk in a form that would not weigh them down.

Although it’s been enjoyed for centuries as a soothing comfort food, currently this humble product is enjoying a renaissance in Greece. Supermarket shelves contain several different types: sweet (not sugary, but made with flour and fresh milk); sour (made with flour and buttermilk); Lenten (using mashed potatoes, leeks, spinach and onion in addition to semolina); spicy containing red peppers and chiles, which is the way they like it in Northern Greece; “Mediterranean” with olive paste, tomatoes, oregano and basil; and Cretan xinochondros, literally sour cracked wheat, which comes in chunks rather than pellets and is more pungent than ordinary “sour” trahana. Recently trahanoto has joined them – a kind of variation on risotto, in which the liquid is added slowly.

But store-bought trahana doesn’t hold a candle to the real thing, the pasta nuggets made by hand in countless homes in rural Greece, from Crete to Thessaly, Lesvos to Epirus. Lesvos surely produces the most beautiful. Almost too pretty to eat, there the “dough” is shaped into little “koupes” or bowls that you can either crumble or cook gently and then fill with a ragout of vegetables or meat or whatever. Crete’s xinohondros is not only the most pungent but also the most tactile, for sometimes the pieces bear the imprint of the fingers that squeezed them dry. In other places, on the mainland, you might see long tables or bed frames spread with golden pebbles to dry in the sun. Often a guard will be posted to ward off flies but also cats, which for some unaccountable reason find trahana a great delicacy.

Making trahana is often a group effort, by a women’s cooperative in some cases, or a collection of neighbors. Since it’s such a long process, the kneading, the waiting and the grating are all helped by a little gossip and storytelling. And it always takes place in late summer, when the heat is most intense for drying.

The origins of this clever way of processing two such fundamental foods into a portable, easy meal go back to antiquity.

We once spent six hours with a woman on the island of Andros, learning to make trahana. Ioanna Louvari has a small cheese plant near Korthi, so she has plenty of cow’s milk (most trahana uses sheep or goat’s milk), which she boiled and then, with her fingers, slowly mixed with semolina until it was the right consistency (about two kilos of grain with 1.2 kilos of milk for three kilos of trahana). Then she kneaded it for about ten minutes until it resembled a grainy pie dough, from which she broke off pieces and rolled into irregular patties, which she placed on a sheet and left to “blow dry” in the summer breeze.

While sipping coffee and nibbling her cookies, we discovered that she did not share our predilection for Cretan xinohondros: “Too goat-y for words,” she said with a grimace, giving us the open packet she’d bought at our suggestion the week before. Instead, she aimed at recreating the taste she’d learned from her grandmother, which she then eats either “white” with butter and cheese or “red” with tomato sauce.

After the break, she placed us on guard duty, armed with a newspaper to keep the flies away and instructed to turn the patties every half hour. This was marginally more interesting than watching paint dry but three hours later the patties were pronounced ready for the grater. 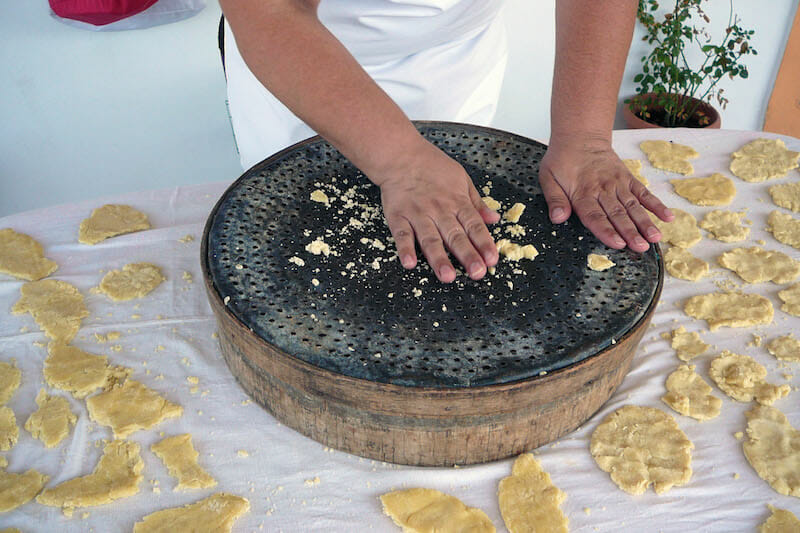 Ioanna fetched the grater used by her grandmother. It was about 18 inches in diameter with a metal top perforated with 14 rings of concentric holes. Those on the rim were rough, but the center was shiny and worn. Decades of trahana grating had made the inner holes less efficient. We set to work and, after an hour, had a gratifying mountain of fluffy golden grains. Ioanna spread them on a drying rack she uses for pasta and covered them with a sheet. They would remain on the terrace until nightfall, when she would move them inside. After a couple of days of drying this way, she would stick them in a very low oven for two to three hours. Then, dried into hard pebbles, they’d be stored until eaten. She promised to give us “our share” the following week.

Trahana finds its way into many recipes. Besides the simple, “instant” soup, it can be cooked with pork, snails or eggplant, as in Crete; kneaded with ground beef for a hamburger or a meatball with a difference; sprinkled into a vegetable bake; made into a pie – trahanopita – a specialty of central and northern Greece; used to stuff tomatoes, peppers or even calamari; and as a change from rice in a savory pilaf. Sweet trahana is even an ingredient in some unusual desserts and puddings, as well as the usual soups and stews.

If you don’t find trahana on any Athens menu, you may want to buy some and try it for yourself. To Pantopoleio tis Mesogeiakis Diatrophis (which literally means “The Grocery of the Mediterranean Diet”) stocks several kinds of trahana, including one flavored with saffron; Eat Crete in Kolonaki and Zouridakis near the Central Market have homemade xinohondros; and the flagship Yoleni’s in Kolonaki features several types of trahana. In the supermarkets, trahana made by Vlaha and xinochrondros by Manousos are reputable brands.

Add to favorites
Trahana in Athens