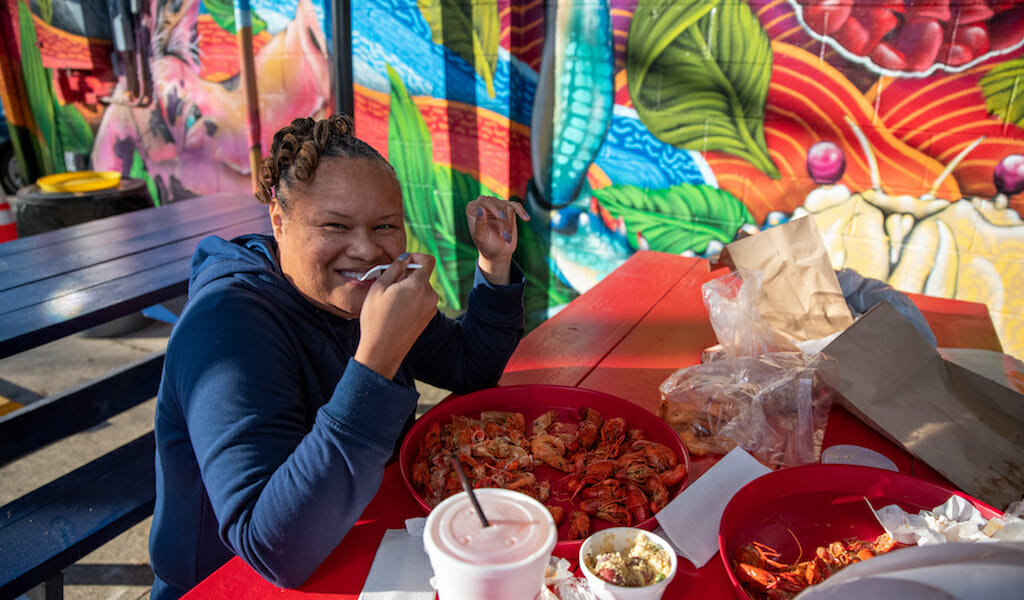 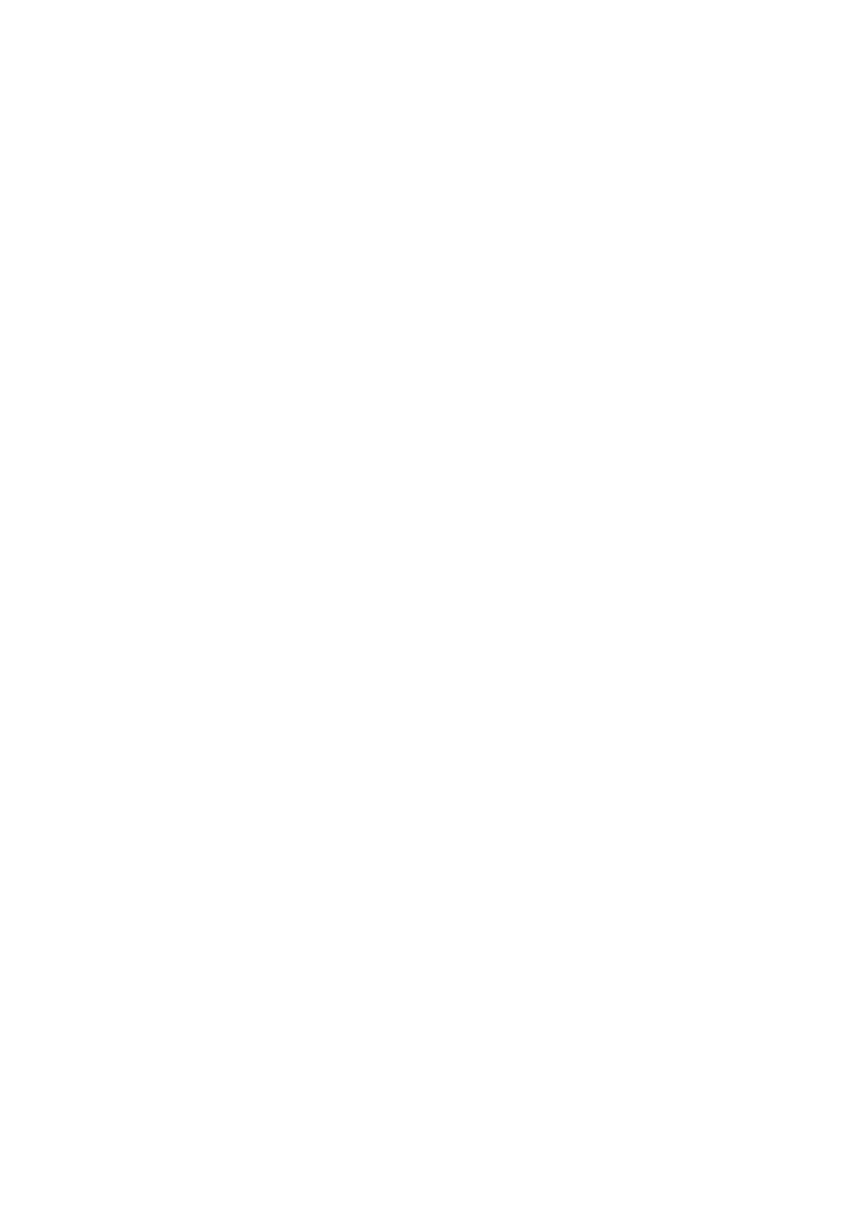 New Orleans is the last communal city in America. Our seasons are Mardi Gras, festivals, football, second lines and crawfish, and we share them together. And it is no accident that our Carnival season and our festival season are bridged by crawfish season: the ultimate act of communal eating.

From late January to early June, give or take, folding tables covered in newspaper are laden with bright red crustaceans, corn, potatoes and smoked sausage, staples of the boil. We stand around the table, peeling and pinching the tails to extract the spicy meat, sucking the heads to taste the boil liquor, drinking ice cold beer, listening to music and telling stories. And when the world stopped in March of 2020, when our festivals were canceled, our second lines stopped, as COVID-19 drove us into our homes and into isolation, crawfish was all we had left to remind us of community. 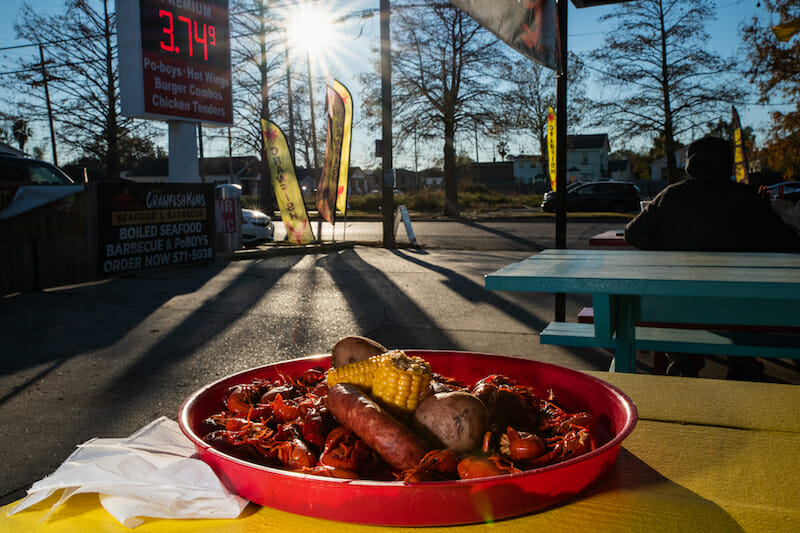 It was during the pandemic, while we were longing for anything normal, that we discovered NOLA Crawfish King’s food truck in the parking lot of an abandoned building on Franklin Avenue in Gentilly, next to the Happy Discount gas station and liquor store. Seasoned cooks and caterers Chris “Shaggy” Davis and Kat Brennan were boiling, and people were coming. Long lines of masked people placed their orders and waited to receive their bags of hot crawfish and sides. It wasn’t normal. It was anything but – but it gave us hope. We would take our bounty home and eat it in the backyard on a folding table, while we drank cold beer and listened to music. It was the closest we could get. And for Chris, it was a lifeline, too.

“We were sitting at home with not a pot to piss in, honestly wondering what we’re gonna do,” Chris recalled. The food truck, which Chris added “saved his ass so many times,” was originally purchased almost as a novelty, an extra for the clients and a way to advertise. But as Covid-19 raged, it became his mainstay and an anchor in the community. 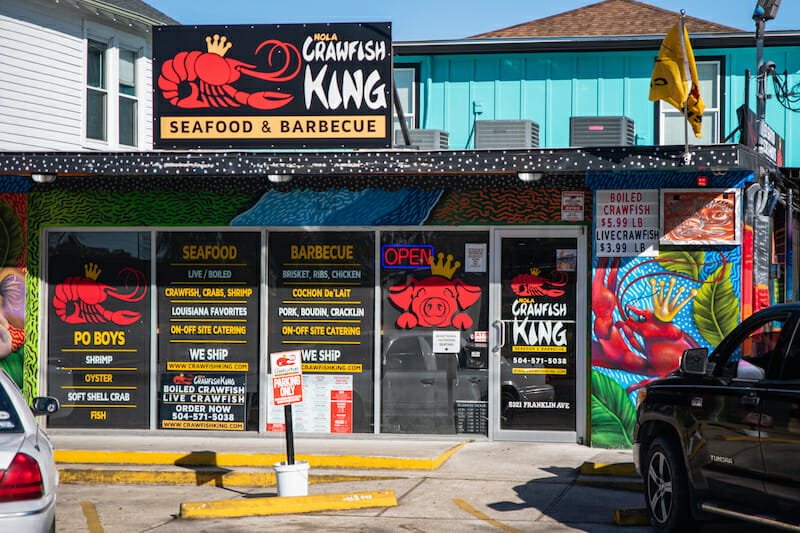 “We sold 2,000 pounds of crawfish every day, Thursday through Sunday.” As someone who frequently stood in the long lines eagerly awaiting my mudbugs, corn, potatoes and smoked sausage, I can confirm this must be true.

If the story of NOLA Crawfish King ended here, in the food truck, it would be satisfying enough. A tale of resilience in the face of the unknown. But it didn’t. In fact, it took a turn that Chris and Kat couldn’t have predicted.

“About two months into it, I hopped off the food truck. It was raining,” Chris recalled. “I had ordered a sandwich from Fiorella’s which is next door. I looked at the line going across the parking lot at the gas station waiting for crawfish, and I just pulled on a door – the front door of this building. And it opened.”

When the world stopped in March of 2020, when our festivals were canceled, our second lines stopped, as COVID-19 drove us into our homes and into isolation, crawfish was all we had left to remind us of community.

The building in question was the abandoned one next to the Happy Discount. It had a damaged roof and water was pouring in. According to Kat she could “smell the mold” from outside. Chris tried to get her to look at the building and she responded with a resounding “no way.” The “no way” soon turned to a maybe, as Chris and Kat inquired about buying the building, which was only minutes away from their home in the Gentilly neighborhood of New Orleans. 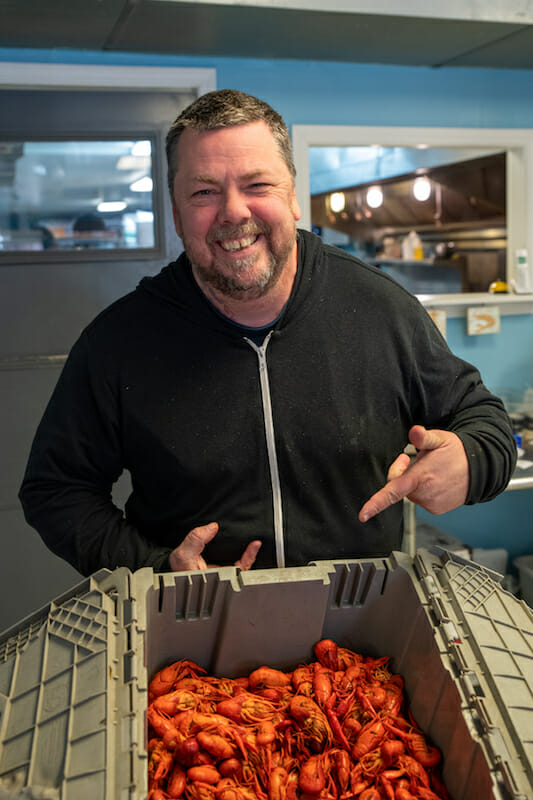 Before long, with the help of friends, family and a banker who was a frequent customer of the food truck, Kat and Chris had purchased the building, and NOLA Crawfish King Seafood and Barbecue was born in January of 2021. The abandoned building is now a beacon, adorned with flags that proclaim “Crawfish,” and brightly painted picnic tables provided for outside seating. The front of the building features a long window that advertises the various products and services – crawfish, po-boys, barbecue – bookended by murals of a crawfish and a hog respectively. Although Chris made his name in crawfish, his barbecue is award-winning as well as “his passion” – and both are equally represented.

Inside, the robin’s egg blue walls are embellished with artwork and awards. There is counter-seating with a few stools along the window, for those wishing to dine in.  The staff enthusiastically greets you when you arrive, offering up their favorites and any specials they might have, as well as what’s unavailable. Everything moves fast here, so it is best to arrive early. When we get to the counter to place our order, Chris himself greets us. He is in the process of replenishing the crawfish, but has something else in mind.

“Here, try this,” he offers. It is freshly smoked brisket, and it is delicious, with a layer of silky, rendered fat and a deep smokey flavor that almost makes us reconsider – almost – but we know what we came for. Crawfish. 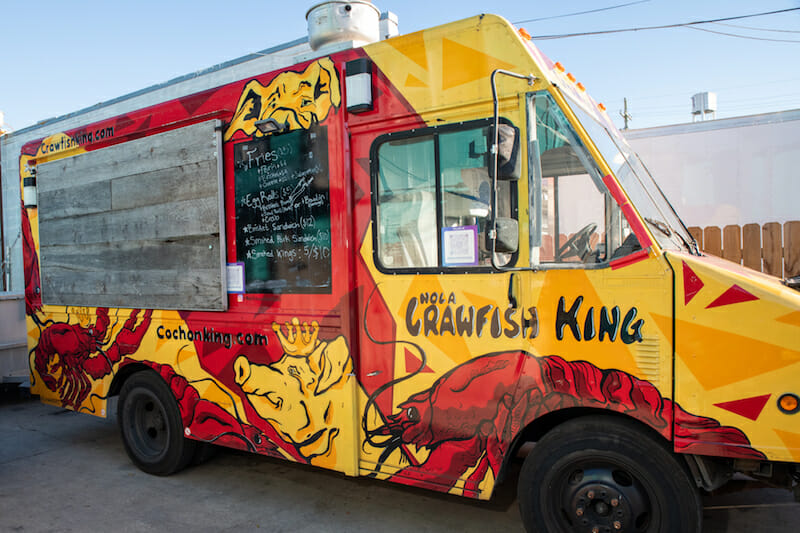 There are fancier boils than Chris’s, but few that are more deeply satisfying. He forgoes brussel sprouts, artichokes and other items that have made their way into the modern boil, for the classic sides of corn, potatoes and smoked sausage. We eagerly awaited as our order was bagged and took it outside to enjoy. The crawfish was nothing short of magnificent. It was easy to peel, spicy and juicy, with hints of citrus and celery, garlic and cayenne. The sides were perfectly cooked and had absorbed all the goodness of the boiling liquid. And we felt comfortable in a way we haven’t in some time.

In honesty, it had been a long year between crawfish seasons. In addition to the pandemic, New Orleans had been battered by Hurricane Ida with parts of the city out of power for nearly two weeks. During this time, Chris and Kat served up to 500 box lunches a day for the community. Troy, a diner at a neighboring table who lives in the neighborhood, recalled their generosity.

“During Hurricane Ida, all of the electricity was out in the city,” Troy said. “And I live in this area. And I’m trying to find places where I can get something to eat because of course we couldn’t cook. He had his food truck out – he had a generator and a grill. He was the only person open in the whole community, you know, trying to feed me … and every day he had a meal – ribs one day, chicken the next day, hamburgers … he had it.”

And in that moment, strangers sitting outside sharing crawfish and conversation, we all realized that this is exactly what we had been missing. 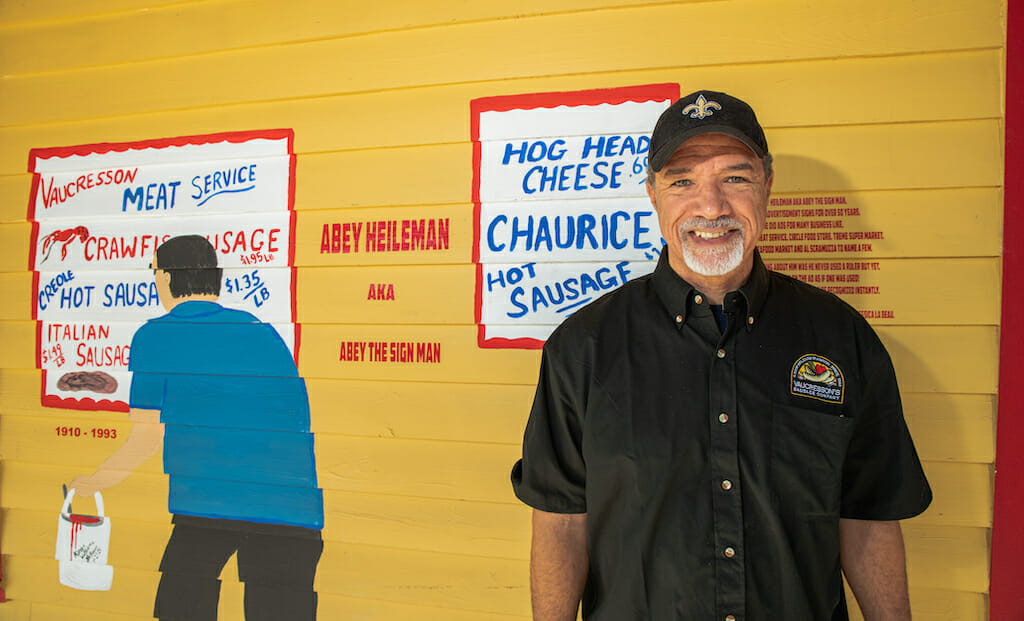 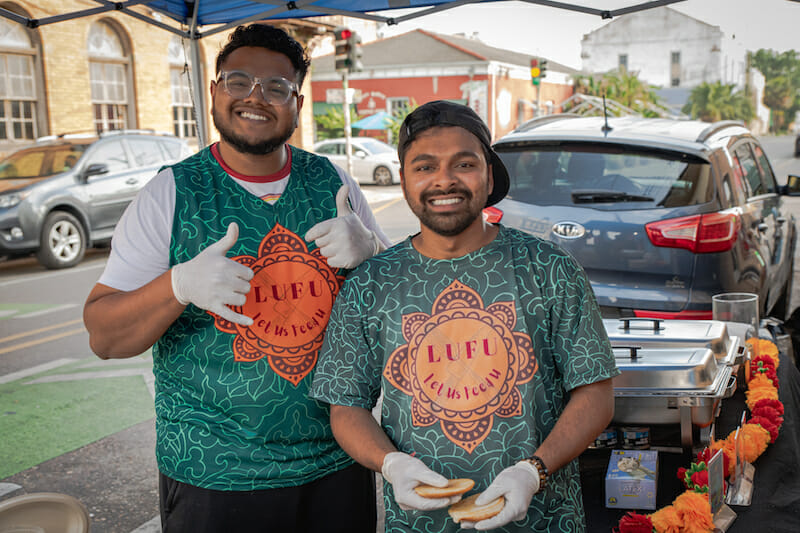 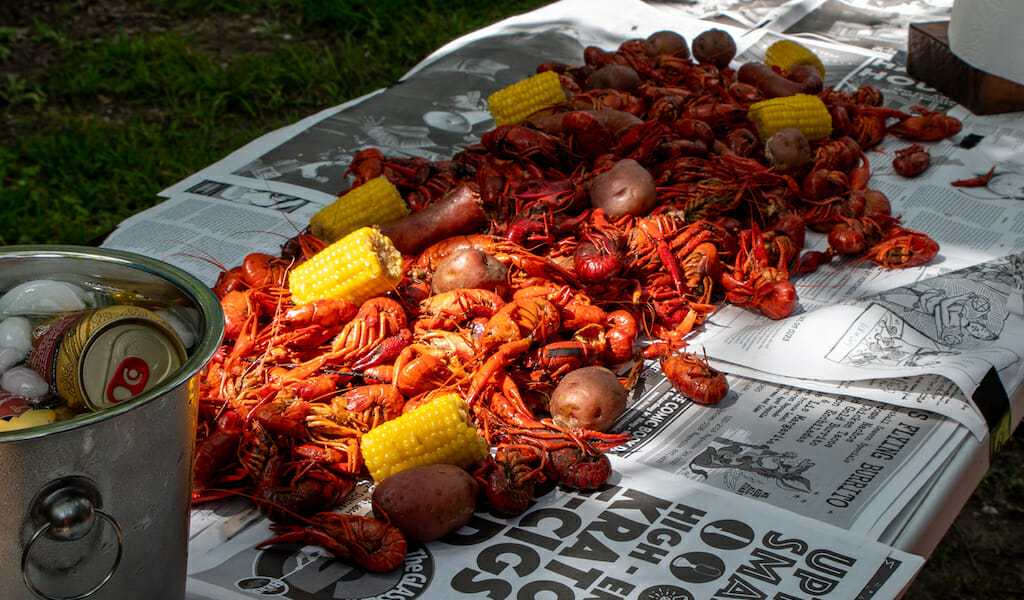