When the hour strikes eight on Saturday morning, Hector Ramirez pulls the wooden handle on a cast-iron lid sealing his self-constructed, propane-fueled, cylindrical oven and unveils his birria tatemada.

The Ramirez family is bustling. Hector’s wife, Marisela, generates a steady rhythm quartering fresh limes. Nearby, their young daughter, Gisel, stands over a scorching griddle heating up tortilla after tortilla. The oval wooden frame of the oven is scrawled with the business’s name: “El Jaliciense,” the idiomatic term for someone born to the central western state of Jalisco, Mexico. The Ramirez family is busy preparing their birria de chivo, the signature dish of the state.

Birria comes in countless forms, and is often one type of meat or another slow-cooked until unbelievably tender. Most people, especially Jaliscans, traditionally think of birria as being made from goat. Hector’s version, tatemada, involves a final roast of birria de chivo in the oven, making the skin charred and crisp. 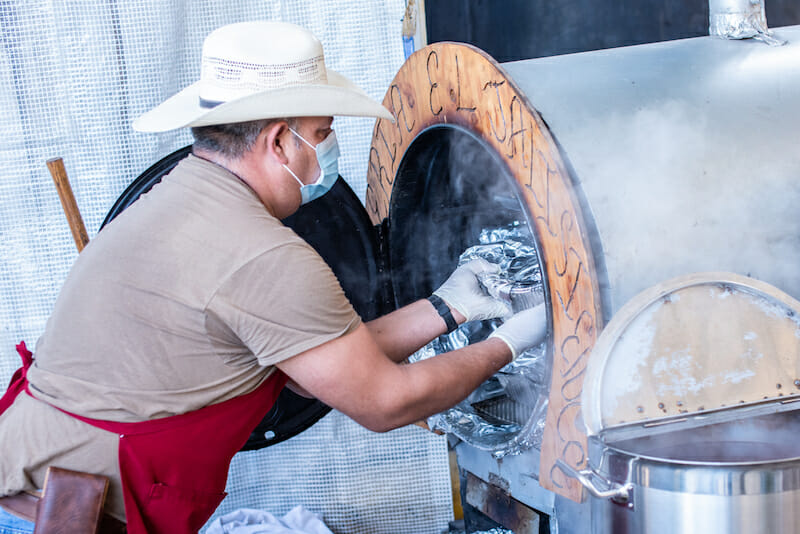 At Hector’s, the heavy door swings open to reveal roasted racks of golden brown, bone-in goat meat arranged in a pastiche of cuts – thighs, ribs, spines and thick cuts of muscle. This visceral vision signifies something special, even among the many gifts found in L.A.’s lush panoply of regional cooking. It’s an incomparable, painstakingly crafted example of the birria tatemada. This is a labor-intensive preparation that employs a dual-cooking process to first steam the meat, before browning its skin in an oven. This recipe for whole goat is true to Hector’s small hometown of Belen de Refugio and its surrounding regions, in Jalisco’s northeastern extremity.

“Birria has been in our family for many generations,” Hector says, looking over the stunning abundance of meat. “An important part of special celebrations. Big parties, weddings and birthdays.” 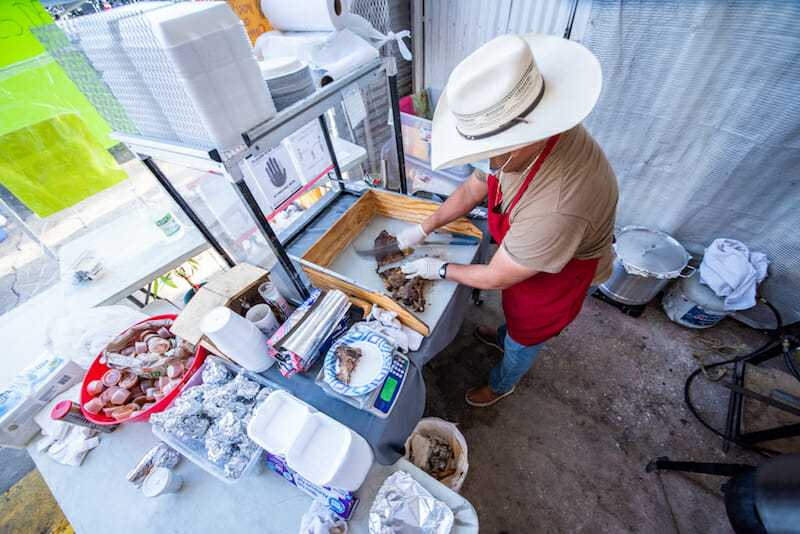 Birria is among the biggest culinary buzzwords across the U.S. today – only it’s not the goat-based Jalisco recipes that get the attention. Birria de res, a form of beef-based birria typically credited to Tijuana’s taqueros, started taking L.A.’s street food scene by storm in 2018. Since then, it has swept across the country like a locust, served in theme parks, food trucks and county fairs, from California to the Midwest and East Coast alike, in forms as novel as birria de res eggrolls, pizza and ramen. Shortcuts including canned purees and cheap meat run rampant.

Hector, however, is steward to a form of birria tied to his roots. Jalisco’s regional specialty of birria de chivo is a legendary dish born of the Iberian invasion, after the Spanish imported a rapidly reproducing abundance of goats to graze across this expanse of Mexico. Unfashionable to the European sensibilities of the elite, the meat was eventually embraced by the people and turned into a generously spiced, slow-cooked stew of tender goat meat. 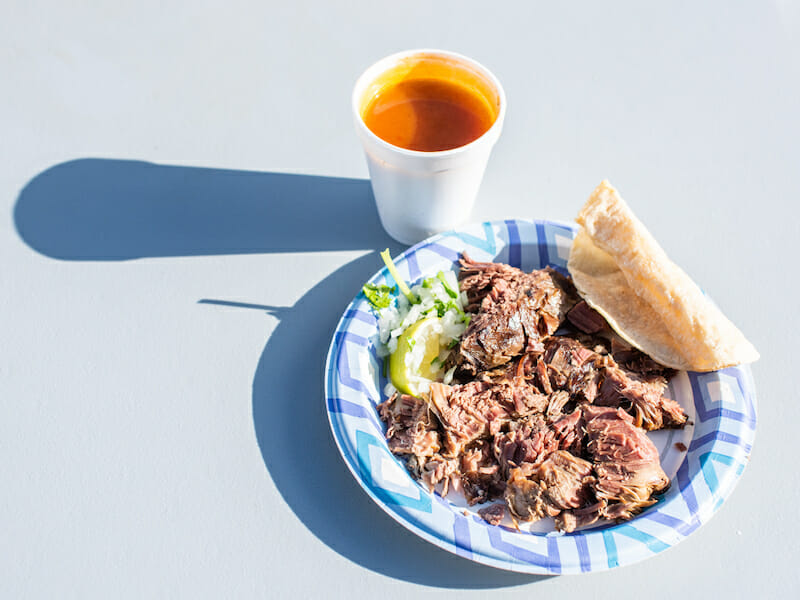 Its name roughly translates to “mess,” recalling many a bowl of consomé-sopped, shredded goat meat swimming in chile red broth found in numerous iterations around the globe’s Mexican restaurants. Birria like Hector’s tatemada, common to Guadalajara and its adjoining regions, is seldom seen in the U.S. Primarily because “making good birria takes a lot hard work,” in the words of this custodian of Jaliscan cooking. Hector learned the art of birria from his grandfather, uncles and cousins, although the tradition goes back even further in his family.

“Every week, my paisanos [countrymen] show up wanting their 5-10 pound orders,” he says. “It means a lot for them to get birria made with discipline and care.” Hector goes through this hard labor weekly, setting up in the concrete-floored courtyard steps away from where he works in machine repair during the weekdays. His birria-making is not purely out of necessity, but because he knows how to make it “the way it’s meant to be done,” preserving and sharing Jalisco’s multi-generational knowledge and traditions with the city he now calls home. 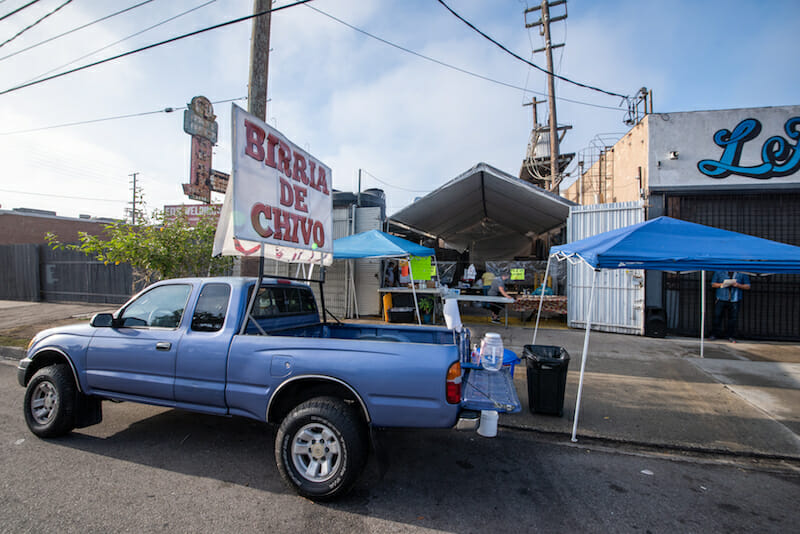 “It takes a lot of sacrifice and work, and the process is long,” he says. “But we’re working with a lot of love, pride and dedication to be able to provide meals that have been made like this for a very long time. And it means a lot to me to share it for the enjoyment and harmony of this community.”

Starting Thursday evening, Hector heads to a slaughterhouse in Chino to select three goats at the intermedio age of about 18 months, considering anything younger to be too tender, any older too tough. Returning home, he washes, guts and butchers the meat. To excise the taste of blood, he utilizes an approach from his ancestors, rubbing the meat piece-by-piece with salt and washing it before hanging them overnight to dry. A ground mixture of garlic, onion, cumin, pepper, clove and bay leaf is rubbed on the meat to season it.

On Friday night, Hector begins slow-cooking the goat over roughly six hours in a giant steamer, the meat covered on all sides with maguey leaves to keep it moist and impart a delicate flavor. Below the meat, a pan collects dripping juices from the steaming goat. These will later be strained to remove any fat, the remainder blended and boiled with a tomato-rich broth spiked with spices until it satisfies his exacting taste. 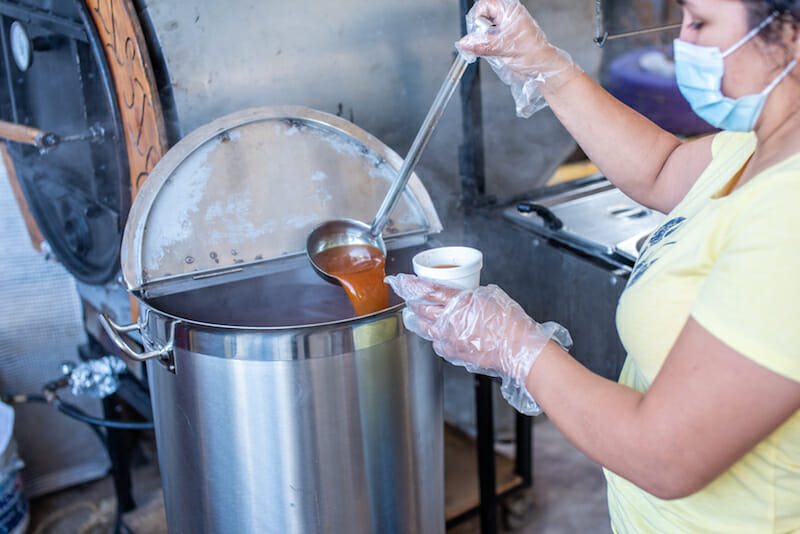 When ordering, one can drown their meat in the consomé, or have some on the side in bowl or cup – either for dipping or pouring over self-made tacos fashioned with the provided tortillas. The consomé is just as strong a reflection of Hector’s regional cooking as the meat itself, a pastoral ambrosia showcasing the tomato-forward style commonly found in the Mexican state of Aguascalientes, which borders Hector’s hometown. A not dissimilar example comes served atop the chivo at a nearby eatery, El Monte’s Birria Calvillo Aguascalientes.

Once steamed, Hector’s meat is transferred to El Jaliciense’s namesake oven to keep warm until 45 minutes to an hour before show time. “When things are done like they’re supposed to be done, it all has better quality,” he says. “Take embroidering, for example. When it is done by hand, there’s a certain unique quality. If it’s done by machine, it’s different.” Finally, Hector fires up the oven to 300 F, then reduces it down to 200 for the final part of the process: making the birria “tatemada.” 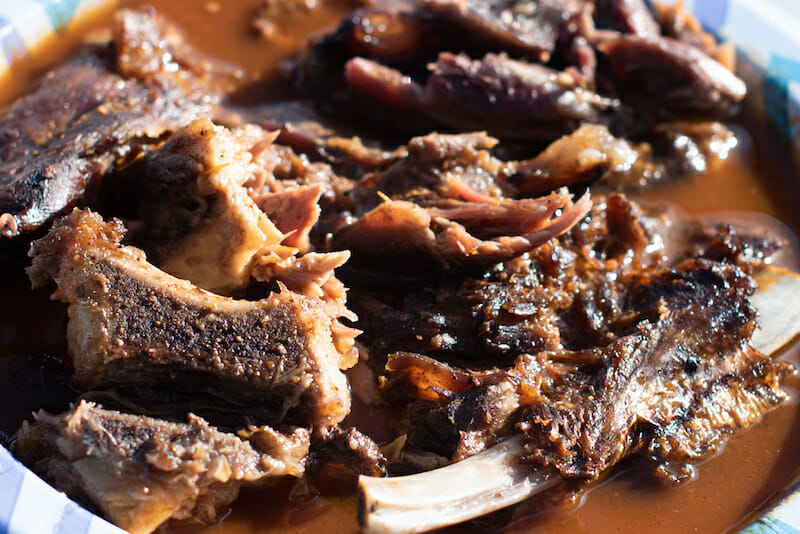 Birria at El Jalicense comes in a few different iterations. In addition to choosing how you want your consomé served, you’ll pick whether your order will come out surtida – a mixture of skin-on, bone-in cuts including coveted thin ribs and rivulets of rendered fat – or maciza, which is pure muscle. For the full tatemada experience, we recommend the former.

Not long after the oven is cracked open, customers begin to show up. Hungry. There are curious groups grabbing tables in anticipation of their first taste, whispering about Hector’s reputation as a birriero. They have arrived along with Hector’s fellow Jaliscans taking away large orders to have a taste of home. Once the meat runs out, El Jaliciense shutters until the next Saturday morning, and Hector does it all again.

This article was originally published on November 19, 2021.