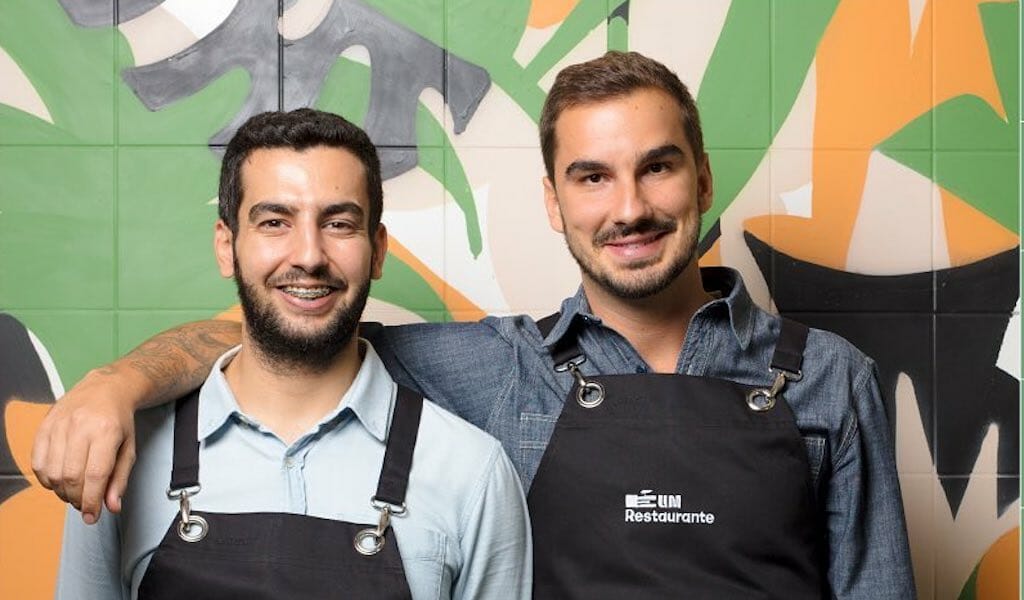 Poverty and social problems are a worrying side effect of the pandemic, especially in big cities like Lisbon. As in most urban environments, there is a significant homeless population. Moreover, skyrocketing unemployment has meant more people than ever are in need of some assistance – families are struggling to pay their rent and put food on the table.

The Portuguese have responded, however, to this large need with an equally large number of solidarity projects. While it’s impossible to name all the people involved who have stepped up to help, we thought it would be worth highlighting the efforts of many people in the food and wine industries. 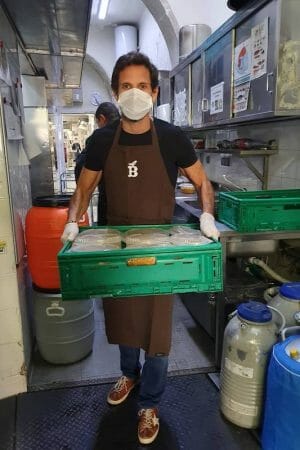 The best-known chef in Portugal, José Avillez has an incredible portfolio of restaurants in Lisbon and Porto, including the Michelin-starred Belcanto. So it was heartening to see someone of his stature roll up his sleeves and open his restaurant Bairro do Avillez not only for takeaway and deliveries but also to cook for the social projects of two juntas (large councils) in central Lisbon: Santa Maria Maior and Misericórdia. “We are cooking meals to be distributed to people in need or who are unable to get food because they are sick. We are doing 50 soups and 50 meals for each of these juntas, five days a week,” José tells us.

“This is only possible because we have both companies and private individuals donating food to us,” the chef adds. José began operating this soup kitchen of sorts out of Bairro do Avillez in the beginning of April and doesn’t yet know what the future will bring. Anyone interested in contributing to these Mesa dos Afectos (“Table of Affection”) projects should contact Junta de Freguesia de Santa Maria Maior (which oversees Alfama, Baixa, Castelo, Chiado and Mouraria), directly through the junta’s website. The same goes for the Junta de Freguesia da Misericórdia (Chiado, Bairro Alto, Bica, Cais do Sodré, Santa Catarina).

Crescer, a non-profit association focused on the social integration of Lisbon’s vulnerable populations, became known in the Lisbon food world for partnering with the city hall to launch É Um Restaurante, a restaurant created to train and employ homeless people. When the pandemic forced É Um Restaurante to close, they couldn’t stay quiet. Instead, they asked their staff if they wanted to help; now, people that were once living on the streets are helping the homeless, cooking around 300-400 meals a day.

“We had to do something, and we’re benefiting from donations – besides our partners, we are getting a lot of donations from the private sector, companies and people, and from city hall. We started doing 200 meals a day and now the needs are growing so much we’re doing 300-400 a day,” says Nuno Bergonse, a renowned chef and the head chef at É Um Restaurante. He and David Jesus, the executive chef, are alternating shifts to make sure the kitchen keeps functioning.

Nuno says the future is uncertain for all restaurants, but they want to keep doing this as long they have the funds. All donations can be made directly to Crescer, which helps distribute the meals made at É Um Restaurante, coordinating with other associations like Comunidade Vida e Paz. 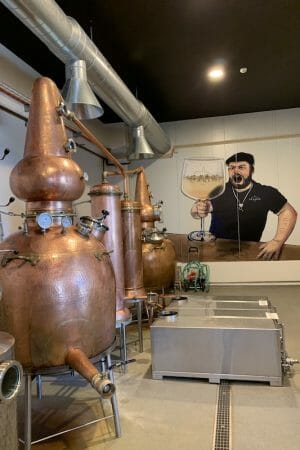 The solidarity has spread to health care institutions and workers. In the Alentejo region, António Cuco, the founder of Sharish Gin in Monsaraz, offered sanitzing gel made with alcohol distilled by his company to nearby institutions and hospitals. At the same time, he also reinvented his gin business: he unbottled one of the shipments that was already ready to leave the factory – his newest brand called Bluwer Gin – and distilled it again. The gin originally was 40 percent alcohol, but now it has gone up to 75 percent and thus can be used both as gin and disinfectant. “We have sold more than 4,000 bottles in our online shop and the reaction on social media suggests people are drinking more than disinfecting,” he tells us. Of course, with such a high level of alcohol your gin and tonic will need only a fraction of the usual quantities. “This [move] has made it possible to keep all the staff working full time,” adds António, “and unfortunately I cannot give away more disinfectant as I need to pay their salaries.”

Also in Alentejo, Herdade da Malhadinha Nova (both a wine hotel and a wine producer) and Garrafeira Soares (a wine shop) have donated €25,000 to three institutions researching Covid-19 and also started a fundraiser for these same institutions. Any contributions can be made here.

A number of wine and beverage companies have also offered disinfectant made from wine aguardente (similar to grappa) to hospitals: Grupo Gran Cruz (producer of such brands as Dalva Port wine), Licor Beirão, Dona Ermelinda, the distillery Levira and the beer group Super Bock, to name a few.

In Lisbon, the platform Food for Heroes (which consists of six different restaurants, Pasta Non Basta Aruki, Chickinho, Grupo Non Basta, Home Sweet Sushi, Sushi@Home and The Burger Guy) is offering food to health care workers on the front lines. Each day a different hospital benefits from their generosity. Any hospital in the region can contact foodforheroespt@gmail.com and request a delivery.

The restaurant group Plateform has created Plateforall and is giving meals to the emergency workers of INEM (National Institute of Medical Emergencies) and various Lisbon hospitals – Santa Maria, São José, Curry Cabral and Dona Estefânia – that are cooked their restaurants Honest Greens, ZeroZero, Vitaminas, Wok to Walk and Honorato.

In Porto and in Algarve, Michelin-starred chefs like Vasco Coelho Santos (from Euskalduna) and Rui Silvestre (from Vistas) are cooking for the staff of São João and Faro hospitals but also for the many people in need through Banco Alimentar, a food bank that’s getting new requests for help every day.

While the coronavirus crisis has been kept in check in Portugal, especially in comparison to other European countries, by swift government action, there are still many people across the country whose lives have been battered by the pandemic. We’re heartened to see so many food and beverage businesses mobilizing during the country’s time of need. 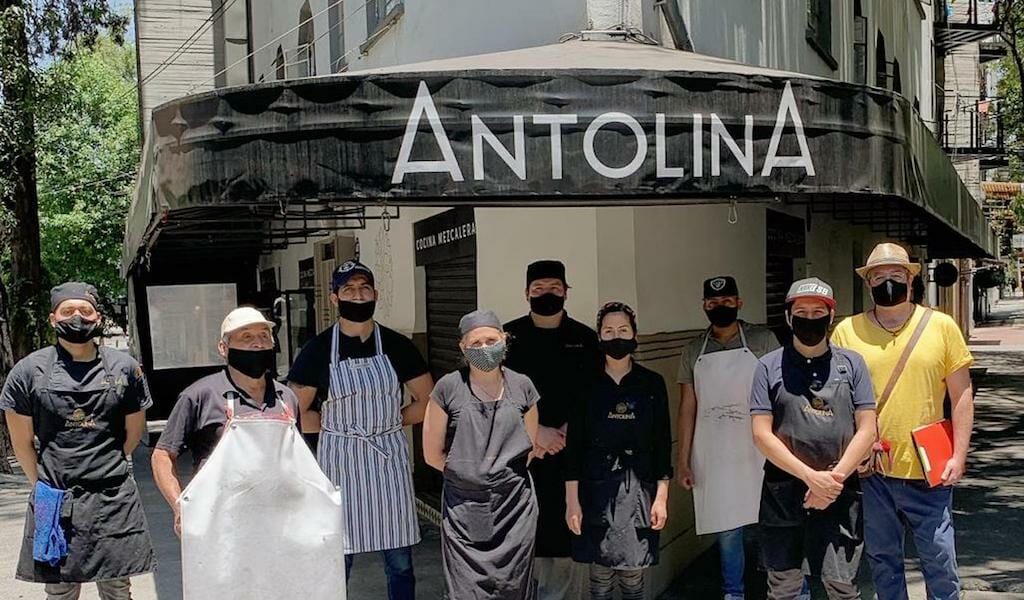 Mexico City | By Paco De Santiago
By Paco De Santiago
Mexico CityCovid-19 has brought most of Mexico City’s restaurants to a halt. But Antolina in the Condesa neighborhood has found a way to keep its kitchen active. “We were about to shut [the restaurant] down when we got the idea of doing something different to keep breathing,” says owner Pedro Sañudo. Pedro, known to his friends… 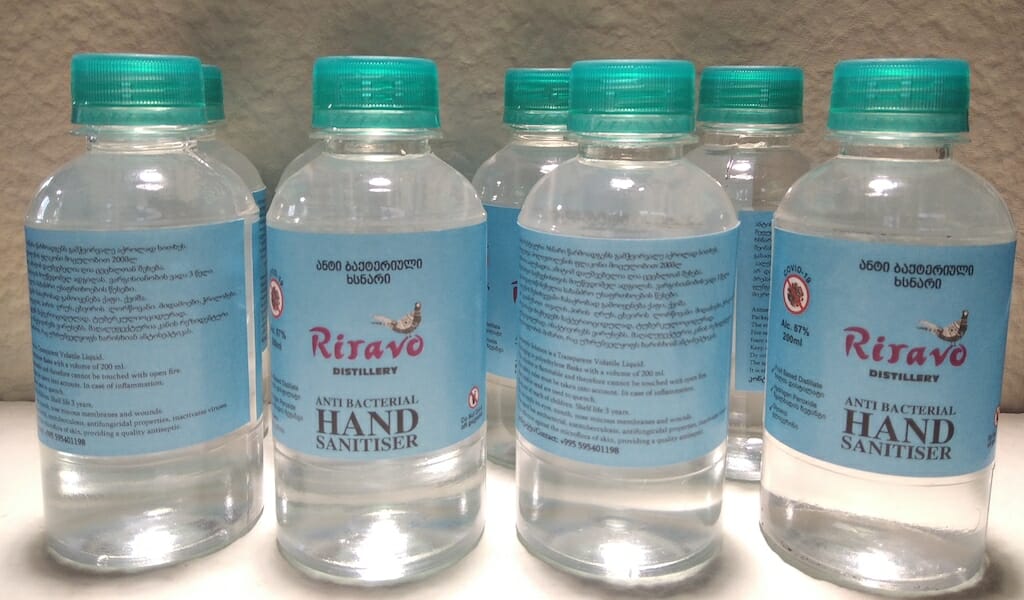 Tbilisi | By Paul Rimple
By Paul Rimple
TbilisiI don’t recall who first poured us a shot of Riravo’s plum araki, or brandy, but I do remember the surprise at the subtleness of the cool spirit as it smoothly slipped over my tongue and down my gullet. Finally, someone was making a fruit brandy that didn’t smell like a soiled pair of grandpa’s…