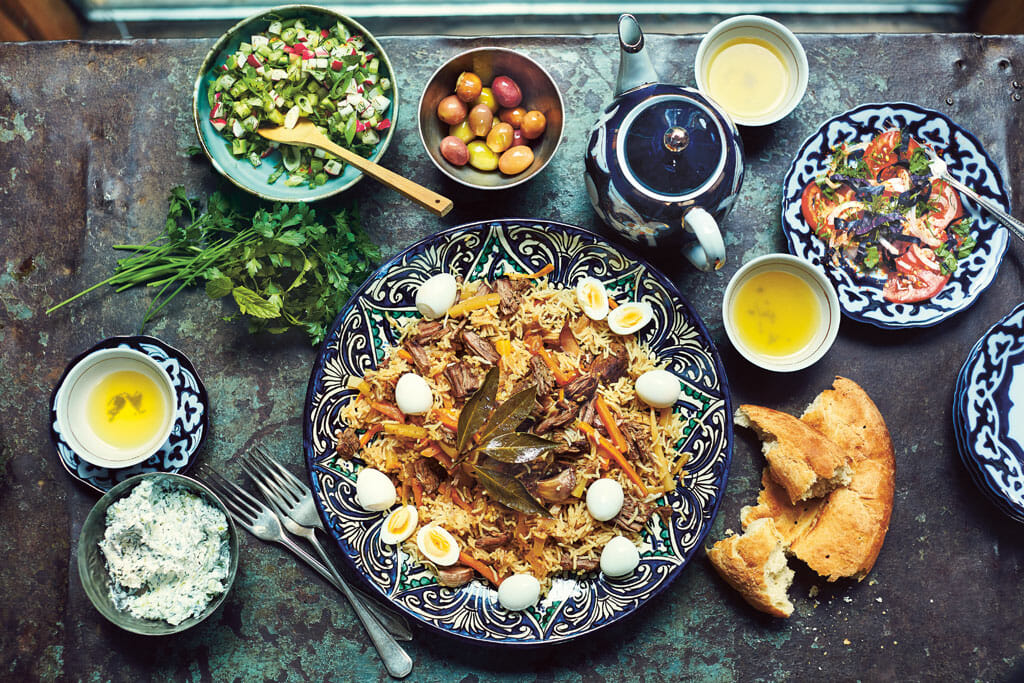 We recently spoke with travel writer Caroline Eden and food writer Eleanor Ford about their new cookbook, Samarkand: Recipes & Stories from Central Asia & the Caucasus (Kyle Books; July 2016). Eden has written for the Guardian, the Telegraph and the Financial Times, among other publications, while Ford has been an editor for the Good Food Channel, BBC Food and the magazine Good Food and currently writes about restaurants for Time Out.

Caroline Eden: It was an idea I was percolating for a long time, since about 2009. Traveling in Central Asia, mainly as a journalist but sometimes for fun, I got fed up with guidebooks dismissing the food in the region as “survival fare.” It’s true that some of the more touristy restaurants are bad, and obviously if you’re in a remote region out on the steppe you’ll get little more than milk and meat, but it’s unfair to class all the food in this massive Asian heartland this way.

For example, in Samarkand I’ve written about foraging in the High Pamirs in Tajikistan. Even up in the mountains, amidst 7,000-meter peaks, creative cuisine rules supreme – there are plenty of fruit leathers, mushrooms, jams and traditional herbal remedies to find and buy. Obviously in the cities, where people have settled for hundreds of years, the cuisine is much more advanced. Shaslik, plov (pilaf) and dumplings and are all available, and the markets have all kinds of fruits, vegetables, nuts and herbs. 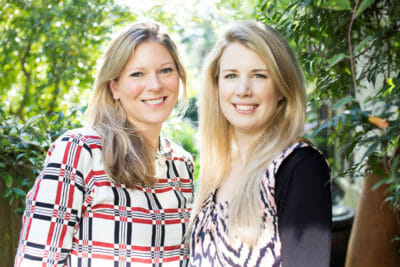 As I was really developing the idea back in 2013 I started to travel a lot to the Caucasus, especially to Georgia and Azerbaijan. I saw a lot of crossover, via the Silk Road and ethnic groups, so I decided to include those South Caucasus countries, along with Armenia, into the book. The food in the South Caucasus is spectacularly good.

The concept I ended up with was for the book to include seven ethnic groups: Uzbeks, Tajiks, Russians, Jews, Koreans, Caucasians and Turks who have all left their stamp on the city of Samarkand over the years.

I wanted to create a culinary travelogue that did justice to a much-ignored region. The recipes are really inspired by the region. We don’t claim that they are authentic – we can’t as outsiders, although a few are close.

Although called Samarkand, the book covers quite a bit of ground, with recipes from Kashgar to Trabzon. In culinary terms, what connects all the regions covered in your book?

Eleanor Ford: The area we have chosen shares a common heritage of being crossed by the ancient trading routes between East and West. Most of the countries have also been under Soviet rule in the 20th century. This history has left a stamp on both the culture and the cuisine. There are culinary commonalities such as the use of spices, fruits and nuts across the region, as well as the very Russian flavor of dill. Layered rice dishes, called pilafs, palovs or plovs are a trademark dish across Central Asia, with each locality having its own wonderful variation.

Based on your travels, how would you describe the state of local culinary traditions in the places you wrote about?

Caroline: All the countries represented in the book are at wildly different stages. Turkish restaurants are increasingly popular in all Central Asian cities. Sushi, so beloved (and overpriced) in Russian cities, is now the thing to eat in the Uzbek capital, Tashkent. In the South Caucasus, especially Georgia, the food scene is pretty hot now – visitors have discovered how good the local dumplings, meaty kebabs and wine of the Kakheti region are – and it’s getting a lot of column inches in newspapers and magazines in the west. The food in Azerbaijan is as good, if not better, but not many people visit, so the food scene there is still a bit ignored.
Turkmenistan and Kazakhstan are woefully behind with it all, and it’s really hard to eat well in restaurants in those countries, but you’ll fare a bit better in people’s homes.

Were there any particular culinary traditions that struck you as a particular surprise? 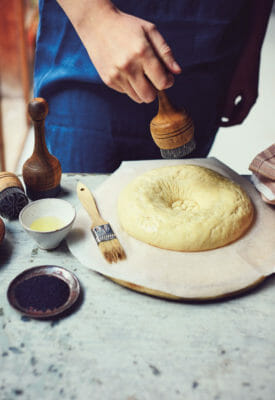 Eleanor: Non (a tandoor-baked yeasted bread decorated with an intricate stamped pattern) is served at every meal and holds great importance in Central Asian culture. It must only sit face up on the table, must be torn with the hands rather than cut with a knife and if any falls on the floor it must be put up high for birds to eat rather than thrown away. In Uzbekistan, a husband and wife will share a non bread on their wedding day, finishing it the next day to mark the start of their married life.

It’s hard to play favorites, but is there any particular area or cuisine that most left an impression on you after doing your book research?

Caroline: Non bread. I’d always enjoyed it and eaten it on a daily basis in Central Asia, but its long history and the cultural significance attached to it are really interesting once you start researching them. Fearsome emperor Tamerlane had a thing for Samarkand non and its light, bagel-like consistency back in the 14th century. Today, nonvoys (bakers of non), contending with the ever-increasing presence of supermarkets and commercial bakeries in Uzbekistan, are evolving to compete. At the Eski Patir Bazar, 25 miles from Kokand in the Fergana Valley, eastern Uzbekistan, gold-toothed bakers dressed in white aprons stamp their mobile telephone numbers into the center of the non bread, a neat form of advertising where a phone call or text message places a direct order. The connection Uzbeks have to non bread is quite special.

Non is the flatbread that is made the length and breadth of Central Asia. It is usually baked by being slapped onto the searingly hot clay walls of a tandoor oven. At home, using a pizza stone and the oven cranked to maximum is the best way to achieve the characteristic chewy elastic texture.

Put the flour in a large bowl, add the dried yeast to one side and the salt and sugar to the other. Make a well in the centre, pour in 125ml water and mix thoroughly. If it feels stiff, add a little more water to make a sticky dough. Turn onto an oiled surface and knead for 10 minutes until the tackiness has gone and the dough is silky soft and smooth. Form into a ball and put in an oiled bowl. Cover with a tea towel and leave to rise for about 2 hours, or until at least doubled in size.

Knock the air out of the dough and form it into a domed round.

Sit it on a floured wooden board lined with a piece of baking parchment and cover again with the tea towel. Leave to prove for a further 45 minutes, or until doubled in size again.

Preheat the oven to 240°C/gas mark 9, or as hot as it will go, and put a pizza stone or baking sheet in to heat up – it needs to get really hot before you bake the non.

Make an indentation in the middle of the bread by pressing with the heel of your hand, leaving a doughnut-shaped ring around the edge. Pierce a pattern in the middle using a non bread stamp or the tines of a fork. Brush the top with oil or lard and sprinkle over the onion seeds. Trim the excess parchment from the sidesof the bread.

Put a handful of ice cubes on the floor of the oven – these will create steam. Use the board to lift the bread to the oven and carefully slide it (still on the baking parchment) onto the preheated stone or tray. Bake for 15 minutes. The top should be golden and the loaf sound hollow when tapped underneath. 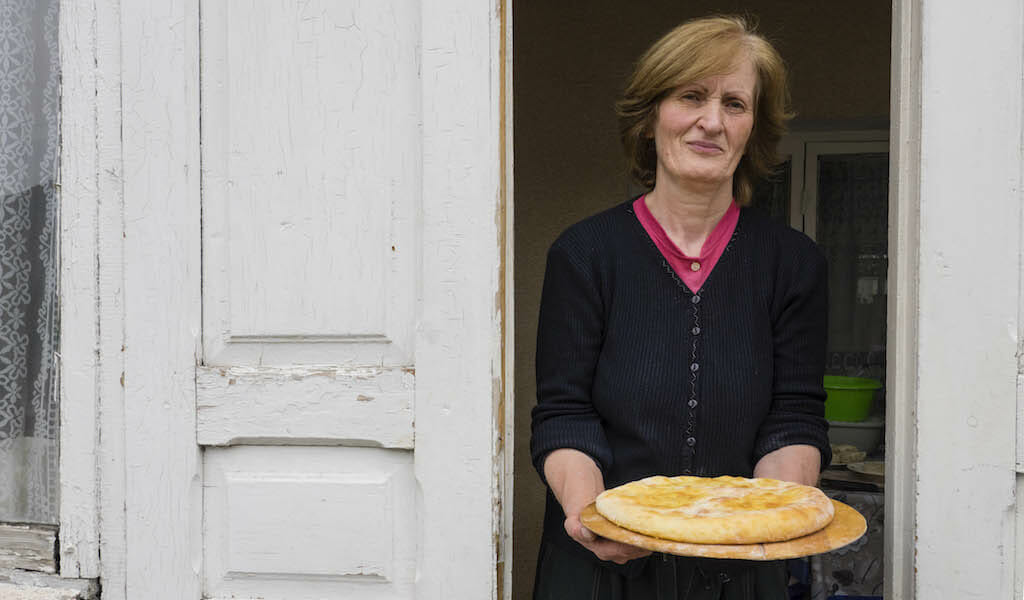