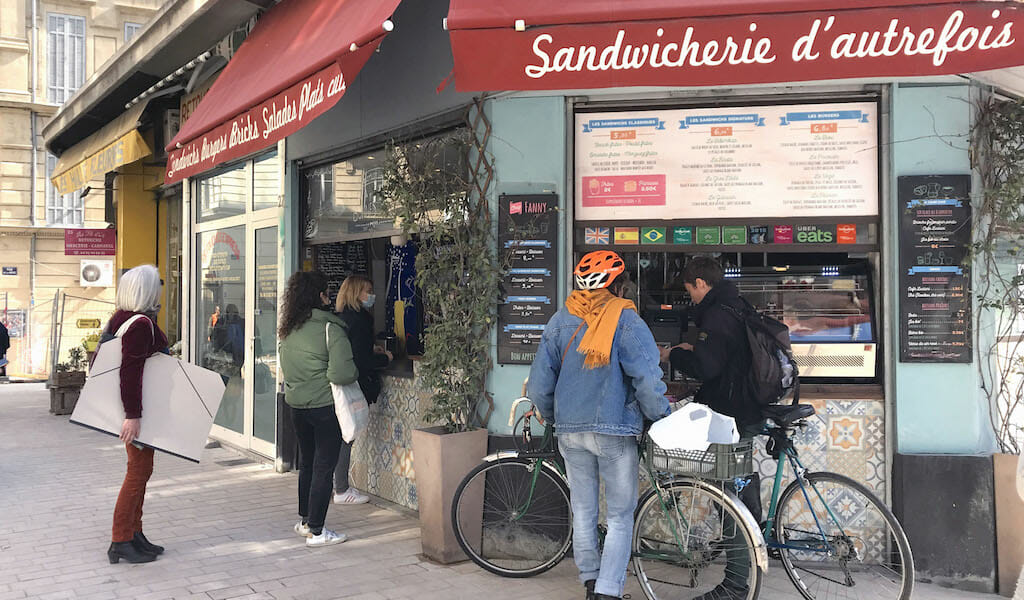 Yet while high-end hoagies make fine once-in-a-while treats, we remain loyal to the old-school sandwich stand Chez Fanny. Located a few blocks up the hill from the Vieux-Port, this corner stand serves up fantastic sandwiches at phenomenal prices. The menu includes classics (think merguez-frites) and signature sammies that make the most of the region’s bounty. And unlike most sandwich windows that are strictly transactional, Chez Fanny’s retro open counter design encourages friendly banter. This is fast food with a side of sociability.

The most popular sandwiches are the Rasta, made with lemon-roasted chicken, tapenade and grilled veggies, and the Gros Dédé, stuffed with succulent lamb, sautéed carrots, onions and fennel, and topped with frites and house-made sauce a l’ail (garlic sauce). The latter, which is a steal at €6, is big enough for two, a size befitting its namesake, the portly Marseille mafioso. But, as the sign says above the counter, “gluttony is the sin of good souls.”

When we comment on the generous portions, Vincent, the owner, explains that it’s due to his large appetite. “I cook for my size,” he jokes, though his tall, lanky frame doesn’t show it.  He gets a workout every lunch hour, busily slathering sauces on bread, dunking frites in the deep fryer and sautéing sandwich fixings while dance music blasts from the radio. Speedily tossing ingredients on the flat-top griddle with two skinny spatulas, he reminds us of a Japanese chef on a hibachi grill. 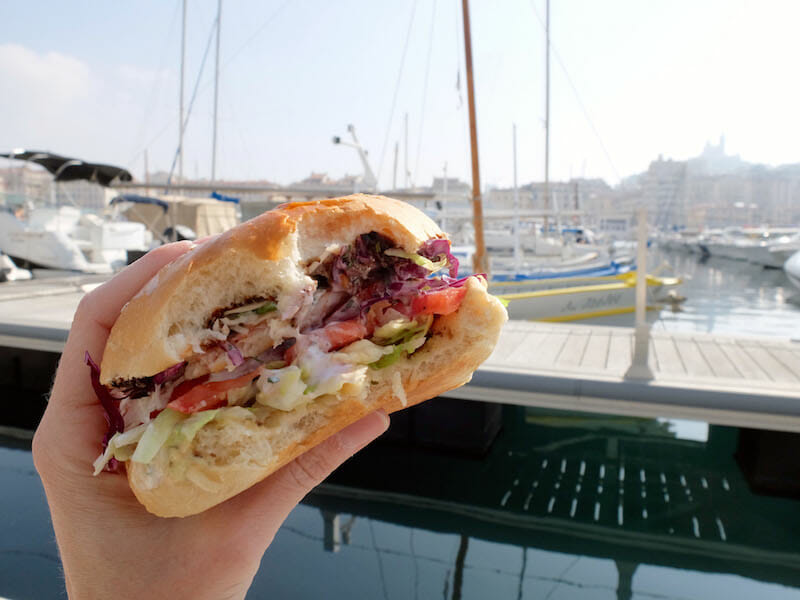 Another standout is the Planier, a grilled rouget (rockfish) sandwich topped with lettuce, tomato, sauce a l’ail and tapenade on a fluffy bun. Named for the island lighthouse that greets ships arriving in Marseille, it’s a surprisingly rare sandwich de poisson in this fish-centric city. We like to pair it with a side of panisses, the round chickpea fritters that are a local specialty.

The little touches at Chez Fanny elevate the sandwiches from simple to stellar. Instead of standard baguettes, there is fresh sourdough from nearby boulangerie Délices de St Andre. Fries are sprinkled with herbes de Provence. In the fricassee, a classic Tunisian sandwich, Vincent deliciously whips the eggs, olives and tomato with fresh herbs instead of layering them, as is tradition.

Don’t be fooled by the plastic squeeze bottles. They contain homemade sauces like fresh-herb mustard and salsa, a very Marseille ketchup mixed with fresh tomato puree, harissa and oregano. Sauce a l’ail is composed of chèvre, fromage blanc (a creamy, cottage-like cheese), cumin, parsley and loads of garlic – way better than the industrialized kebab-shop version.

He gets a workout every lunch hour, busily slathering sauces on bread, dunking frites in the deep fryer and sautéing sandwich fixings while dance music blasts from the radio.

House-made ginger lemon juice is bracing and wonderfully not sugary. For sweets, the brownie and fromage blanc mousse with caramelized fruit are popular picks. Most are made on the premises “with love,” says the cashier, who doubles as a prep chef for Vincent.

The menu hasn’t changed since Vincent started running the stand in 2019, but he and his team like to play in the small kitchen. “We try to offer surprises while staying faithful to our regulars,” he explains. Some days they’ll do a salad or plat du jour like daube au boeuf (beef stew). On others they’ll bake tiramisu or cookies. During our last visit, a chalkboard sign at the counter advertised a Rossini burger, a spin on the indulgent French dish of foie-gras topped steak. Miraculously, they were selling it for only €7.50, their low prices part of their “keep the customer satisfied” attitude.

Many regulars frequent Chez Fanny for lunch: nearby office and hotel workers, city hall employees and construction workers redoing the street and sidewalk out front in the ongoing centre-ville makeover. Local grandmothers treat themselves to a barquette of fries in the afternoon. It’s also a favorite spot for a morning coffee (made by local roaster Café Luciani) – in fact, during Marseille’s various lockdowns, the open counter allowed customers to get a drop of café culture so ingrained in France. 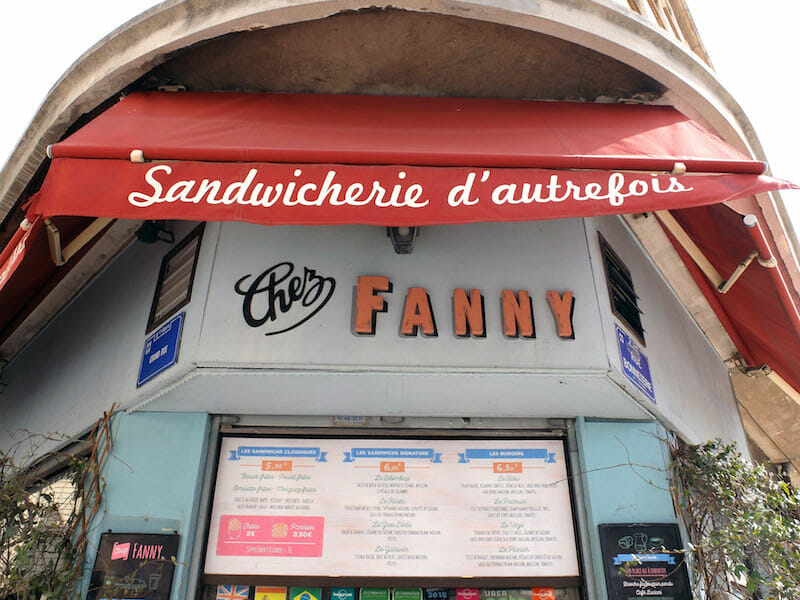 The clientele is also made up of tourists strolling in the Vieux-Port and through Le Panier’s winding streets. They get a sightseeing bonus with each bite. Chez Fanny sits across from the Hôtel de Cabre, the oldest still-standing home in Marseille (built in 1553) that was curiously rotated 90 degrees during post-war reconstruction.

As a stand, Chez Fanny isn’t constrained by the strict noon-2 p.m. heure de dejeuner at French restaurants. A worker on the early morning shift can buy lunch at 10 a.m. Two 20-somethings straggling home from the club can soak up the booze with an omelet frites sandwich. Being open nonstop from 9 a.m. to 5 p.m. gives Vincent the freedom to make what customers want, when they want it.

Vincent took over Chez Fanny just over a year ago from his friend, Stephanie (aka “Fanny”) who transformed her parent’s snack bar, where she worked as a teenager, into this convivial spot. Previously a service technician, Vincent had never worked in the food industry before, but, as a Sardinian, he “has cooking in his blood.” So, when Stephanie announced she was selling, he jumped at the chance.

He owes Fanny for the recipes and reputation, both of which he has maintained in spite of a rocky start. “I took over in December, when there were fewer customers,” but once people returned with the warm weather, he loved the sociability and the way his sandwiches could put a smile on a customer’s face.

Normally, Chez Fanny has stools at the counter and a few tables outside. Though the seats have been removed due to Covid, the pandemic has ultimately boosted sales, with restaurants being closed for months across France. Although Marseille’s culinary scene has been plagued by the virus, these sandwiches have staying power. 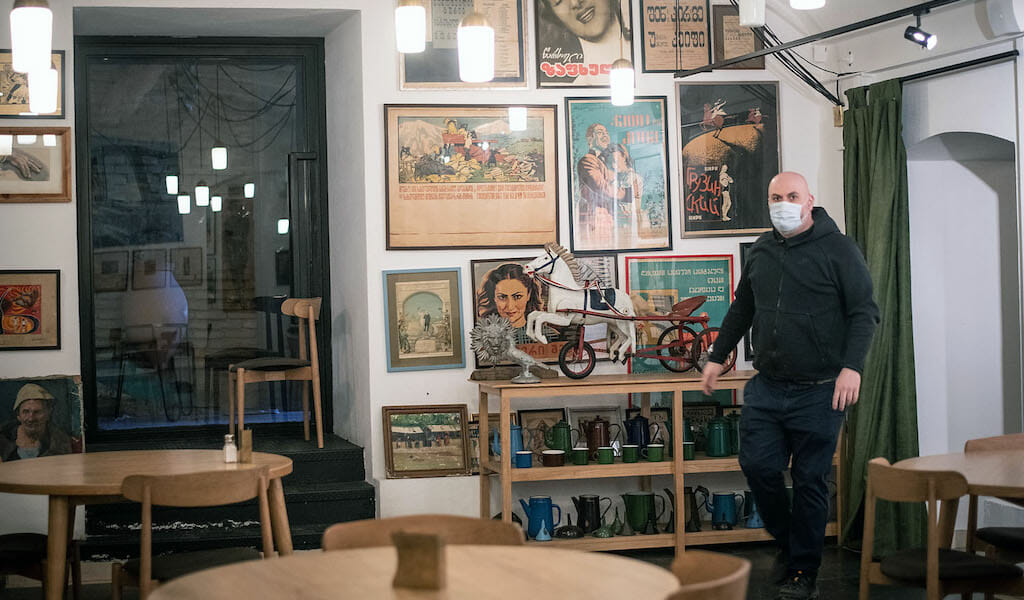 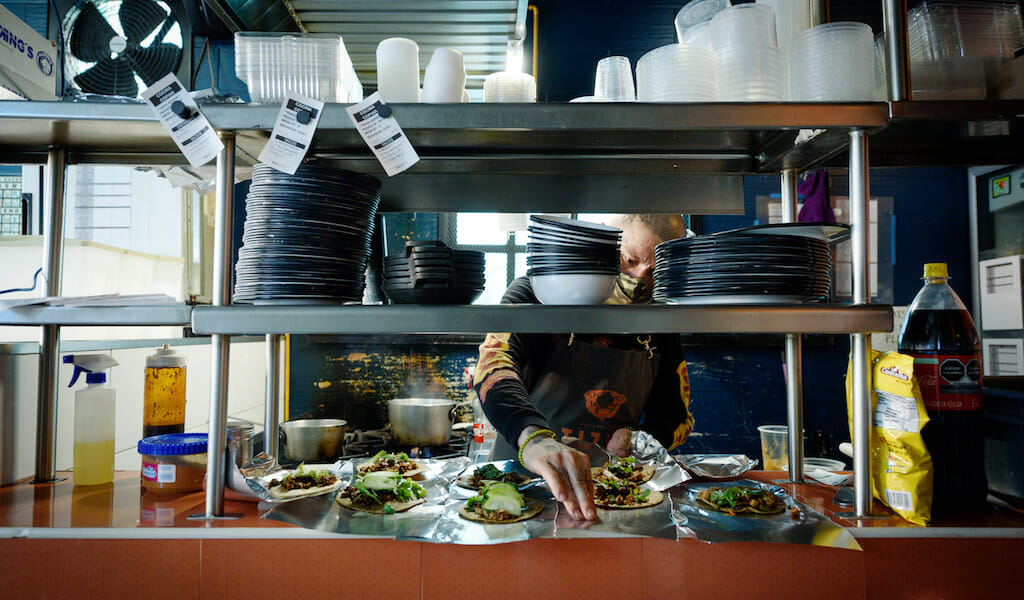 Elsewhere | By Culinary Backstreets
By Culinary Backstreets
ElsewhereConsidering that the pandemic is still raging, the annual travel lists that come out at this time of year have taken on a new shape: Rather than promoting destinations, the focus is on the places that people want to visit when things open back up, visions buttressed by more personal recollections. Travel is still elusive…
Chez Fanny
28 Rue de la Bonneterie
Tel. +33 4 91 44 25 85
Hours: 9am-5pm