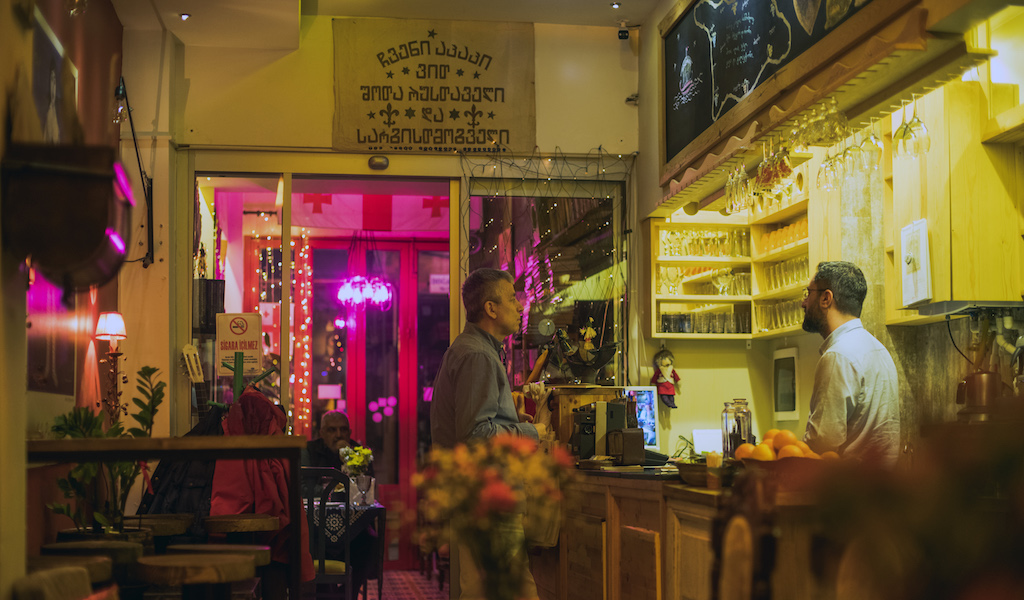 As winter descends over Istanbul, cloaking the city in gray rain clouds that make for beautiful sunsets but unpleasant commutes, we flee the many open-air eating options in the city for cozier digs, replacing outdoor meyhane feasts and rakı toasts with homey bowls of lentil soup and steaming cups of tea.

Yet when we’re craving a place that is warm in ways beyond food, the average Istanbul lokanta often leaves something to be desired. Which is why, on a recent rainy Friday evening, we were pleasantly surprised to stumble upon Galaktion, a Georgian restaurant on a cobbled side street off Taksim Square, smack dab between Istiklal Caddesi and Sıraselviler Caddesi.

Stepping into Galaktion feels much more like stepping into a 20th-century salon for literati than a restaurant – and for good reason. The narrow entryway is lined with books in Georgian, Russian, Turkish and English. The lights cast a warm glow over the mismatched furniture, and soft music drifts from the speakers, shifting from Turkish folk songs to bossa nova and back again. Stairs to the left lead down to a bustling kitchen, and the entryway opens to a bar and dining room somewhat more like a restaurant but still comfortably akin to a living room. A painting of Galata Tower covers the back wall, plaques in swirling Georgian script adorn the rest, and every table is set with a small vase of flowers and a place mat extolling the many virtues of Georgia. Come evening, the tables are filled with families, students and couples, both Turkish and foreign, celebrating each other’s company over steaming, handmade khinkali and glasses of qvevri wine. 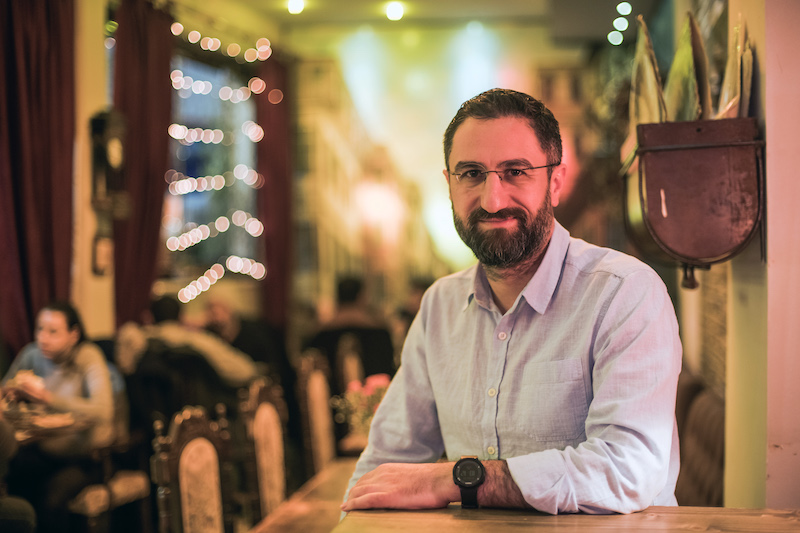 Though first drawn in by the ambiance and food, a winning combination of classic Istanbul chic with spot-on Georgian delicacies, we were pleased to discover that the true hidden gem of Galaktion – a hidden gem in its own right – is the owner, Irakli Kakabadze. A teacher and writer by trade but a cook out of necessity, Kakabadze was a published author in his homeland before moving to Istanbul five years ago. He originally opened Galaktion, named after the 20th-century Georgian poet Galaktion Tabidze, in a smaller storefront in Galata. At first, his wife and a friend helped him around the kitchen, but when the restaurant moved to its current location around a year and a half ago, the staff expanded to five, including one Turk, a student of Kakabadze’s. “His Georgian is quite good,” Kakabadze tells us, a hint of pride in his voice.

Georgians have a long history in Istanbul – for proof, look no further than their overlapping cuisines. A number of classic Turkish dishes such as pide and çerkez tavuğu have strong ties to Georgia’s rich traditional kitchen. The most recent wave of immigration to the city came during the turbulent period following the fall of the USSR, when a civil war and various secessionist movements drove many Georgians abroad. Kakabadze chose to settle in Istanbul for a few key reasons: “My mother still lives in Tbilisi, so I can visit her, and there are many Georgians here.”

Indeed, the community is dynamic enough to keep him involved in his own culture and language. When he’s not busy running the restaurant he helps organize various Georgian cultural events, from poetry readings to concerts, and teaches Georgian language courses at the Gürcü Kültür Evi in Mecidiyeköy and the Machakhel Foundation in Ataköy.

A teacher and writer by trade but a cook out of necessity, Kakabadze was a published author in his homeland before moving to Istanbul five years ago.

Kakabadze studied in Japan for a year, and while there he took inspiration from the tanka poetic form (a 31-syllable poem, traditionally written in a single unbroken line), especially the works of Basho. He later released a series of poems on Twitter under the pen name Iaki Kabe. These were so successful that many thought they were written by a Japanese poet and then translated into Georgian. “It’s actually my dream to have them translated into Japanese,” he admits with a laugh. A number of these poems have been translated into English by Mary Childs, a lecturer in Slavic languages at the University of Washington, who collaborates regularly with Kakabadze. A novel of his, which tells the story of an 11-year-old Georgian boy during wartime, was also recently published. When we ask him about his experience as a Georgian living in Turkey he smiles, pulling a small edition from the bookshelf behind him. “I wrote a book about this exactly,” he says, reveling in the mystery but declining to elaborate. (Unfortunately for us, the book is in Georgian.)

Between all of these literary activities, Kakabadze still manages to churn out consistently delicious Georgian dishes. “I know the Georgian kitchen, and when I came here, I realized that opening a Georgian restaurant would be a great opportunity,” he explains. While the ingredients in the dishes he offers are not so dissimilar to those in many Turkish dishes – Kakabadze only brings wine, chacha and spices back with him from his visits to Tbilisi – the flavor combinations are what make them distinct.

We typically start our meal with a steaming bowl of supkharcho, a beef stew laced with cilantro, somewhat reminiscent of Taiwanese beef noodle soup (albeit sans noodles). Alongside we munch on thin slices of eggplant, fried until soft and smoky, and wrapped around a satisfyingly rich walnut stuffing. 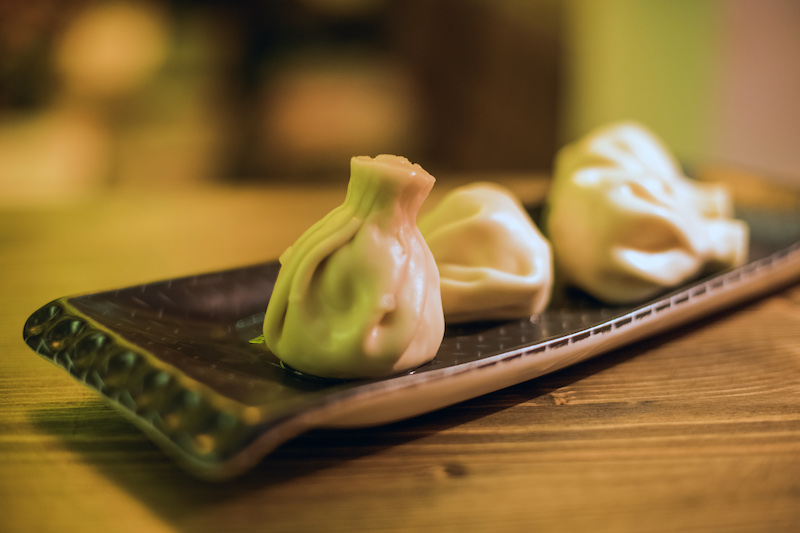 Handmade khinkali, small dough purses crowned with almost comic topknots, are made to order and brought piping hot to the table – to avoid burning our mouth, we always have to wait an excruciating couple of seconds before biting into these morsels. While the more traditional beef-filled khinkali are flawless, the cheese-filled option is a rich and surprising alternative that pairs perfectly with Galaktion’s homemade red qvevri wine, itself funky and refreshingly quaffable.

Though undeniably delicious, we often forego ordering khachapuri, only in the interest of sampling more without running out of room, and instead feast on chilled chicken coated in a sweet-tart pomegranate sauce.

Once we have our fill, we call for the check, which arrives at the table with literary flair, encased in a hollowed-out copy of one of Galaktion Tabidze’s books. We end the dinner with a shot of chacha – a toast to Kakabadze and one last bit of warmth before venturing back out into the Istanbul winter. 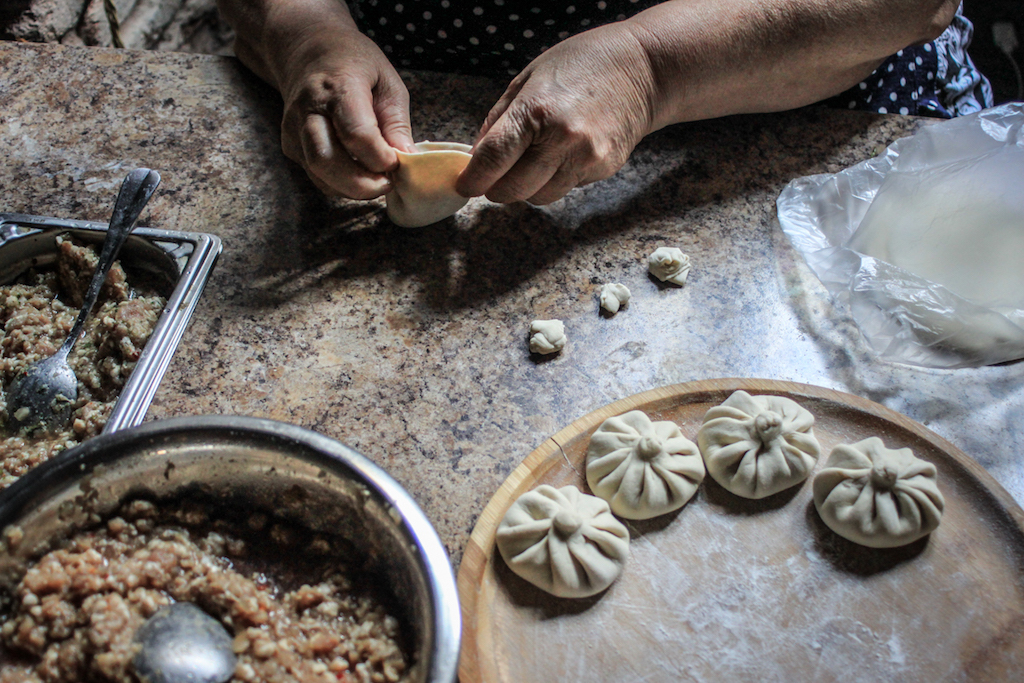 Tbilisi | By Paul Rimple
By Paul Rimple
Tbilisi -- We bit into the khinkali, its handmade dough indelicate and sticky, as we like it. Steam poured out the newly made hole, and we blew lightly before slurping up the rich stock and gobbling the dumpling down, even the puckered knob. The ground pork and beef was packed with fresh cilantro, the juices absorbed… 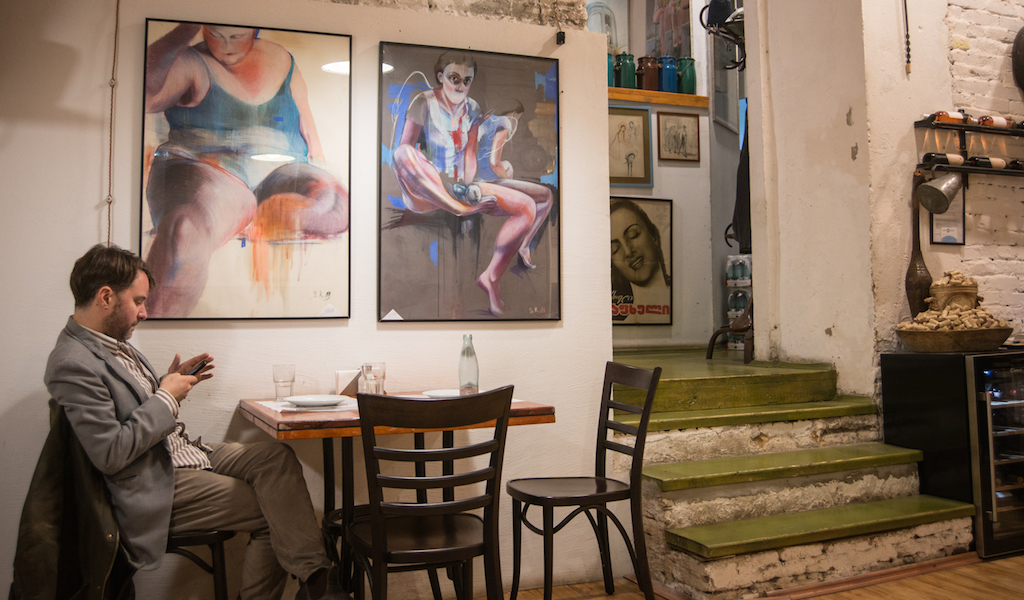 Tbilisi | By Paul Rimple
By Paul Rimple
Tbilisi -- This story starts with a hamburger, a juicy, perfectly grilled patty between a pair of fresh, no-frill homemade buns and the standard trimmings. As burgers become part of the culinary landscape in Tbilisi, we find that many cooks have a tendency to get too slick with a dish that loathes pretension. But this… 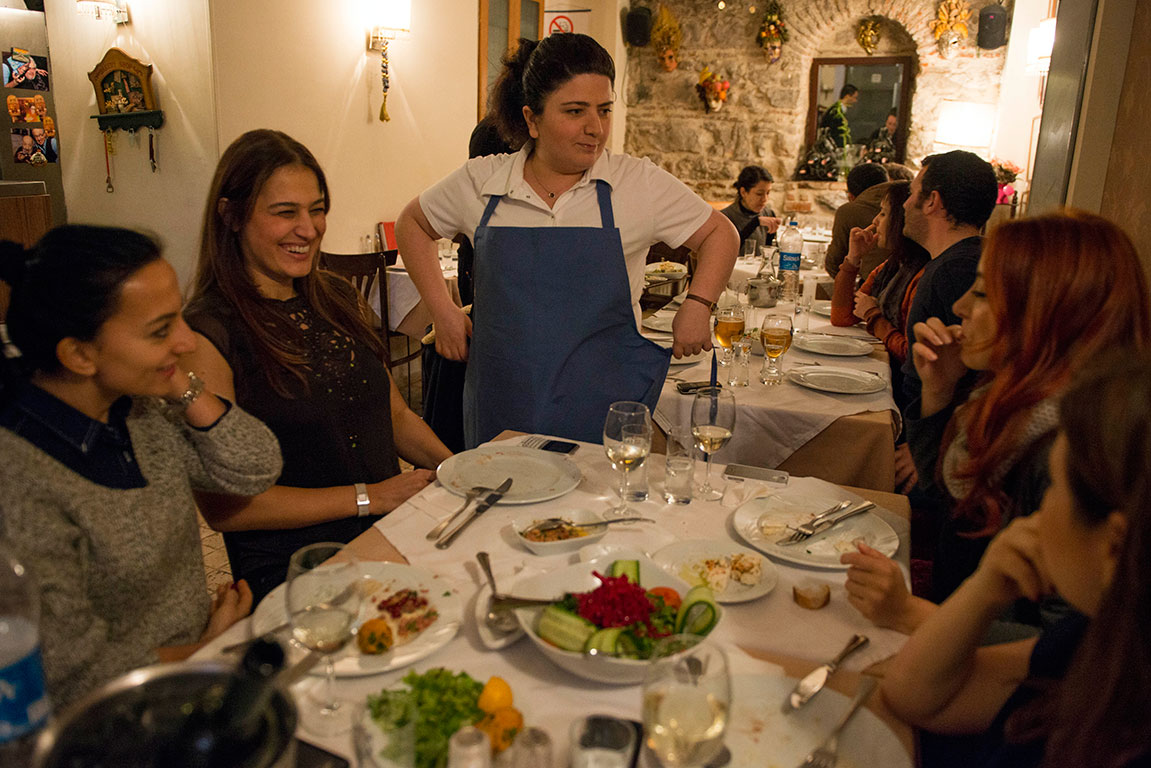 Istanbul | By Istanbul Eats
By Istanbul Eats
Istanbul -- Editor's note: We regret to report that Mari, which was run by the former chef and owners of Mekan, has now closed.  In the great multicultural Anatolian kitchen, questions about the ethnic or national origins of foods are often cause for forks and knives to fly. A porridge called keşkek is a hot-button…
Galaktion
Billurcu Sokağı 18/A, Beyoğlu
Tel. +90 530 684 76 34
Hours: 2-11pm