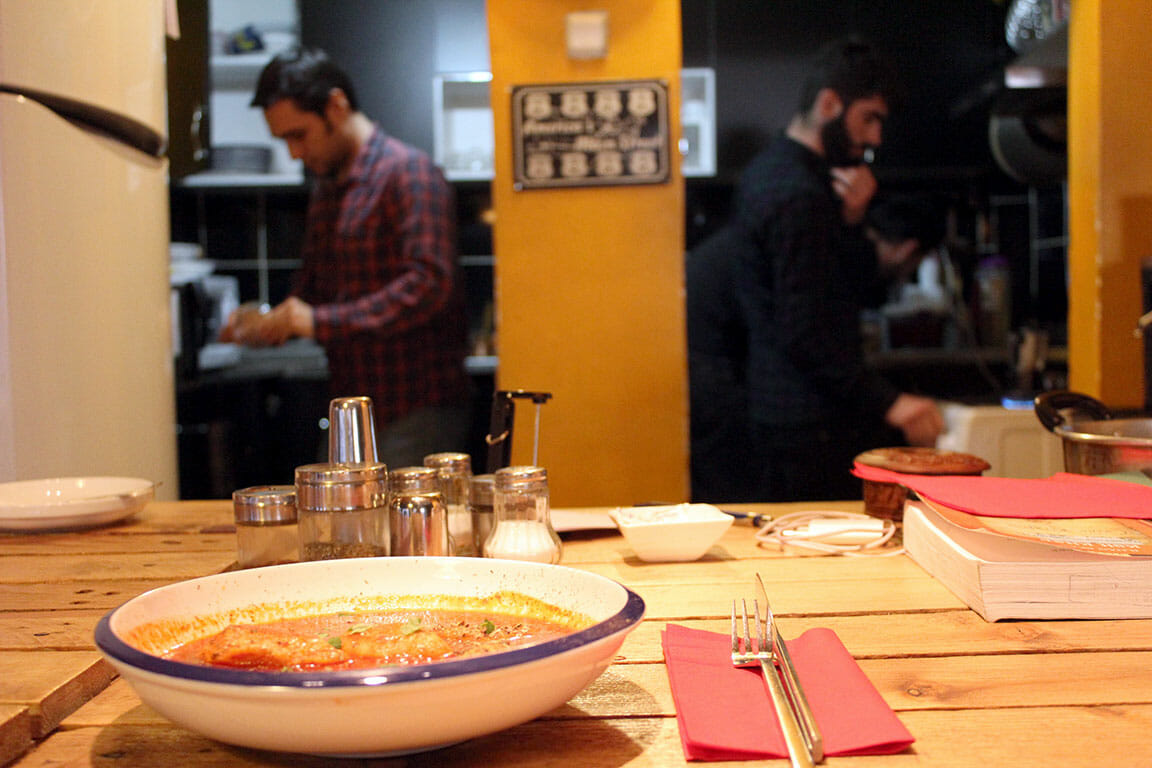 My wife, Kurdish in-laws and I are enjoying an early meal at Gabo, one of Diyarbakır’s most successful new restaurants. It gets dark early this time of year in the city, and the dry air carries the ayaz chill, which engenders a need for a hearty soup and hot tea. The owner, Cahit Şahin, shares stories of the place’s beginnings.

“When we applied for a restaurant license, City Hall just laughed,” he tells us. “‘For a vegetarian place?’ they said, ‘In Diyarbakır? Go ahead! It doesn’t matter if we grant you one or not. You’ll go under in three months!’”

But that was nine months ago. Gabo, which bills itself as the predominantly Kurdish southeast region’s only vegetarian restaurant, is thriving. In fact, they are doing so well that Şahin and his fellow owners are planning to open franchises in the western Turkish city of Tekirdağ and in Istanbul. As Şahin talks, he gestures at the bustling café around him. “We used to work as tutors for students preparing for their standardized exams. We were just sick of the rat race, of always being tired and worn out. I envisioned a cozy alternative joint where I could drink tea, listen to jazz and play backgammon with my friends.” He laughs. “We haven’t touched a backgammon board since we opened the doors!”

Though Şahin is Gabo’s co-owner, he doesn’t like the word “owner” very much and always speaks as “we.” “I know it’s becoming a cliché,” he says, “but we really are a collective. We have been adding to our team all year long, and now we are seven. Each of us takes full ownership of the place.”

Our meal begins with stasiabo, a hot yogurt soup made with mint, green apple and siyabo, a garlic-like herb indigenous to Kurdistan. The soup has a tart taste and creamy texture that warm the whole body, a perfect antidote to the autumn chill outside. Gabo serves it in a white bowl on a carved wooden platter with a basket of dark bread and a small dish of gherkin pickles on the side. Gabo places a lot of importance on the aesthetics of the food. “People don’t just need polite service,” Şahin says. “They need art. We take into consideration both the quality of the food and the design of the presentation. Everything here has a meaning. Everything! I decorated with posters of French New Wave films because I did a master’s on the subject. Our name Gabo comes from the nickname of the writer Gabriel García Márquez. I mean, what we are doing here – running a vegetarian restaurant in a city like this is a bit magical realist, don’t you think?” 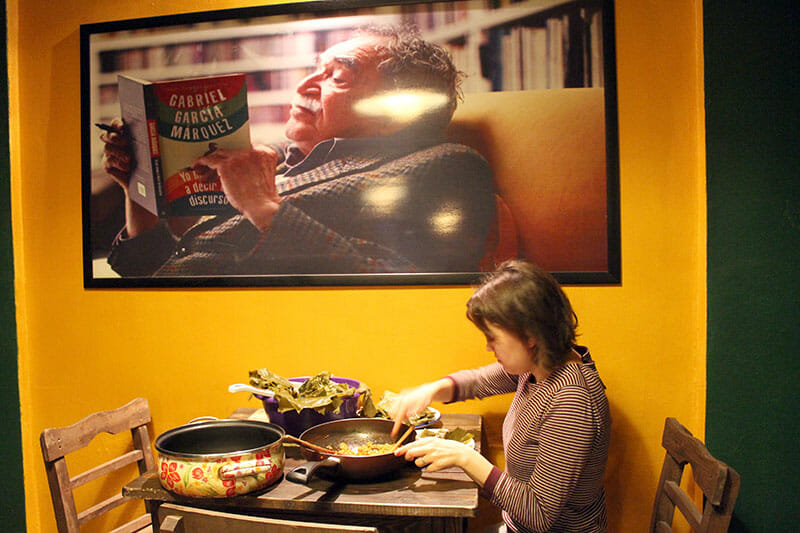 Diyarbakır, an ancient walled city that serves as the unofficial capital of Turkey’s Kurdish region, is renowned for the quality of its grilled liver, its stuffed rack of lamb, spicy meat lahmacun and hearty breakfasts of cured kavurma (beef rendered in its own fat) and eggs. Most locals will tell you they can’t get full without meat. “Some people even told me you lose your virility if you don’t eat meat!” Şahin says. “Or that children won’t grow. But this kind of thinking is cultivated, something you learn. All it takes is a little bit of awareness to break down the walls.”

And good food. With such a big party, we can order a large variety of dishes and try everything. Next comes “Salad with Sauce by Emin” – a colorful arrangement of lettuce, red pepper, mint and apple with a tangy pomegranate dressing. The salad is followed by the mysteriously named “Hinizuchi”-sauce spaghetti, a pasta in a spicy tomato-based sauce flavored with curry and heaps of fresh basil. Şahin smiles when I ask him the meaning of the name.

“We try to be a little witty with the menu,” he says. “We want the names to stick out. Stasiabo, for example, is the name we gave the green apple soup. We combined the Greek word stasia, or ‘resurrection,’ with the Kurdish name of the herb, siyabo, and there you have stasiabo, the born-again Siyabo.”

We order the stir-fried siyabo itself next. It’s a fragrant herb, with a flavor that has a strong resemblance to fresh garlic greens. Gabo cooks it with egg, salt and red peppers. Şahin wouldn’t elaborate on the other seasonings. He said that while he didn’t mind telling people the recipe in person, he wanted visitors to the restaurant to ask for themselves rather than simply read it somewhere. “It’s a way of starting a dialogue and sharing information,” he explained. “That’s why we don’t really describe dishes on the menu. We want to encourage people to talk with us. That kind of sharing is one of the reasons we opened this place.” The simple siyabo is easily my favorite dish of the night. This makes Şahin laugh when I tell him.

“It’s a specialty of my mother’s back in Hakkari,” he says. “When I told her I had put it on the menu she was just horrified. This was something you went out into the mountains to pick – good enough for the family but not the kind of dish to serve a guest.”

It’s an attitude locals have toward many of their traditional foods: Somehow it’s just not good enough to present to the outside world. It’s the result of many long years of assimilation, perhaps. In Hakkari itself, siyabo is prized for its medicinal qualities, and is used to treat everything from rheumatism to diabetes. It is also one of the many herbs from Turkey’s Kurdish region now being researched for its anti-cancer properties and, more importantly, it’s one of Gabo’s most popular dishes.

Another “witty” menu item and legacy of Şahin’s mother is the mercimek çorbası, or lentil soup, dubbed “The Best Mercimek in the World.” Her recipe is different from the local Diyarbakır version. “Here,” he says, “everyone prepares theirs with some kind of meat broth, and no one uses tomato paste.” Another popular dish with a name and a story is the “Hiroshima Mon Amour Köfte.” It’s a hot, crispy fried dumpling stuffed with spinach and three different cheeses, in tribute to the three loves of the famous film. It comes with a side of fresh yogurt from the city’s markets.

As for his own conversion to vegetarianism, Şahin says it was sudden. “In university, I started keeping a cat. About five years later, I had gone back to Hakkari for my father’s trial. He had been arrested in the so-called KCK operations [a wave of arrests targeting Kurdish political leaders]. While there, I realized that if my culture had somehow decided that cats were food, I would have ended up eating this living creature that I loved. And that was it. We don’t need to eat animals to survive. It was like an epiphany for me. Since then, I’ve converted my brother, and Gabo has inspired 30 to 40 others to make the decision.” 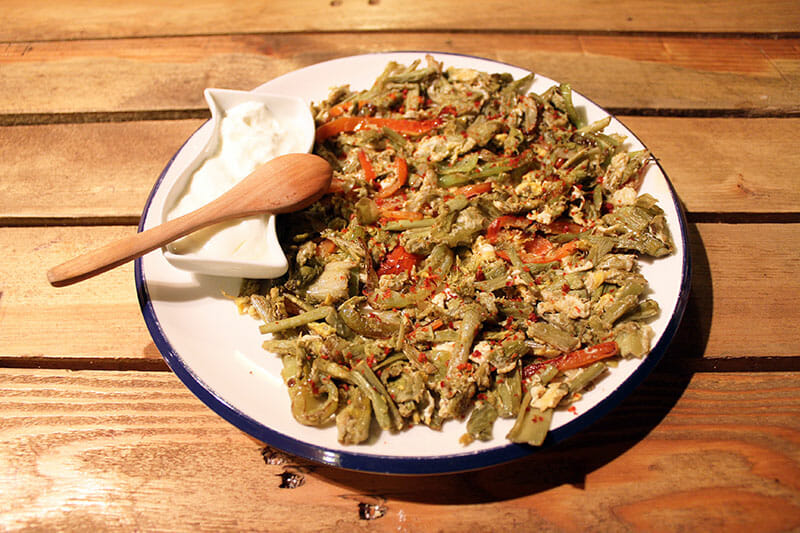 Our next two dishes are a shepherd’s pie with spiced lentils instead of meat, and a vegetarian rendition of yahudi köfte, “Jewish” meatballs. This last is based on a traditional dish in the Southeast – until the middle of the 20th century Diyarbakır and several other cities in the region had long-standing Jewish communities. It’s a steamed version of içli köfte (bulgur dumplings) cooked in a rich, savory tomato gravy and stuffed with a spicy meat substitute. It’s absolutely delicious.

Aside from the recipes Şahin has inherited from his mother, most of the dishes are creations of the staff. They are always working on something new. They even take down a recipe from my wife’s aunt. Each season has a different menu. We are visiting during the last week of the autumn menu. But the upcoming menu is not the same as last winter’s. “We are always revising and reviewing and inventing,” Şahin says.

Creativity, invention and spontaneity are in the atmosphere at Gabo. It attracts the proverbial outsiders of the city: the LGBT community, the local feminists, the animal rights activists and others who don’t quite fit in with what Şahin calls the “monotony” of the local scene.

“The café culture is very monotone here,” he says. “The city has hundreds of cafés but they all have the same posters of Charlie Chaplin and play the same Turkish pop. If you have a friend visit you, there’s nowhere to bring them but big chains like Gloria Jean’s. We wanted to be an alternative.”

I ask him if the lack of creativity has anything to do with the political situation.

“Of course the politics of Turkey affects us,” he says. “Whenever you try to start something different, create something you enjoy, your conscience bothers you. A friend told me once, ‘I have one brother in prison and one in the mountains [a commonly used euphemism for joining the outlawed Kurdistan Workers’ Party (PKK)]. Either one could die at any moment. It makes me feel guilty just to make love to my wife.’”

We end the night with a slice of trileçe, the tres leches-like cake that has become a national obsession in Turkey in recent years. “I assure it’s not the pre-packaged stuff they’re selling in Istanbul cafés. We make it homemade,” Şahin says. He serves us a soft, airy sponge cake topped with the eponymous three types of cream – light, flavorful dessert that goes perfectly with our after-dinner teas.

Gabo has become a part of both the local community and the greater online community. Before the June 7 elections, they held several political debates at the restaurant and hosted the Armenian-American writer Peter Balakian. Many well-known local celebrities have helped spread Gabo’s name on social media or exchanged recipes – people like visual artist Şener Özmen or writer Sibel Oral. CNN Türk’s anchorwoman Nevşin Mengü, also a vegetarian, found them on Instagram and asked for one of their recipes. They clearly fill a long-neglected niche.

As I write, the situation in Diyarbakır only seems to get more dire. The day after our visit, Kurdish lawyer and peace activist Tahir Elçi was assassinated in the old district, and a curfew was once more declared. A few days later, the 500-year-old Kurşunlu Mosque caught on fire during clashes between security forces and local activists in Diyarbakır’s historic Sur district. In a city sometimes torn apart by politics and decades of conflict, places like Gabo seem an alternative future, a gesture of faith in life beyond war. 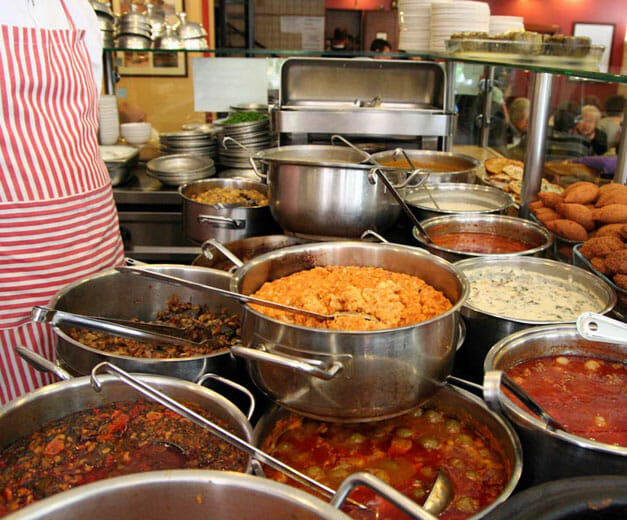 Istanbul | By Istanbul Eats
By Istanbul Eats
IstanbulFor us, one of the highlights of spring in Istanbul is a visit to Çiya Sofrası, the Asian-side eatery that is very likely the best restaurant in Istanbul. It’s certainly not the fanciest or most cutting-edge place in town, but we rarely leave Çiya without having a profoundly new and memorable taste experience. Thanks to… 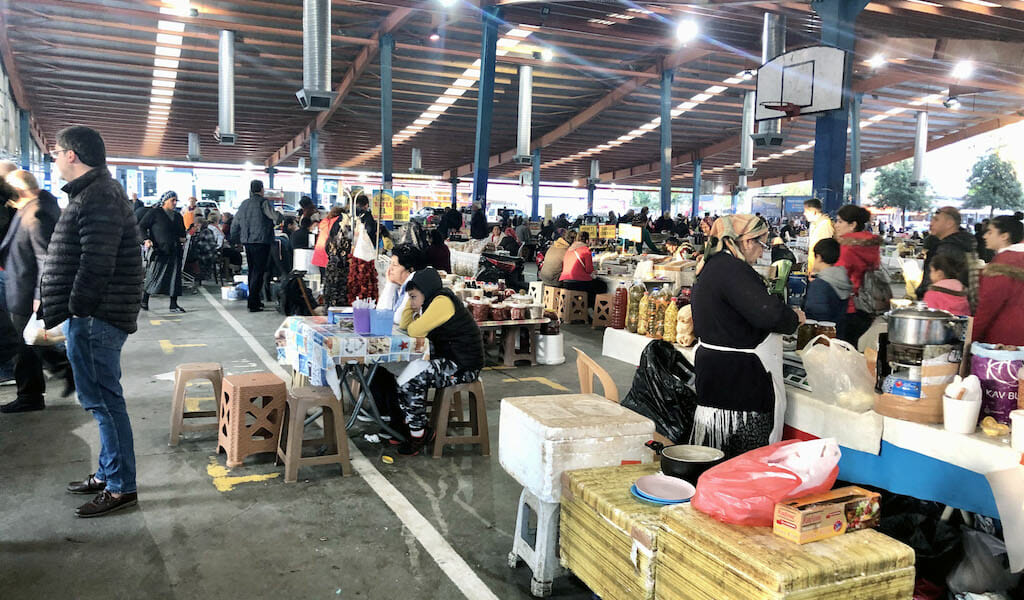 Istanbul | By Paul Benjamin Osterlund
By Paul Benjamin Osterlund
IstanbulThe southern city of Adana is synonymous with kebab, and for good reason. Not only is the spicy grilled skewer of meat named after and originating from the city perhaps the most iconic and beloved style of kebab in the country, Adana also boasts the highest number of excellent kebab joints per capita anywhere, according… 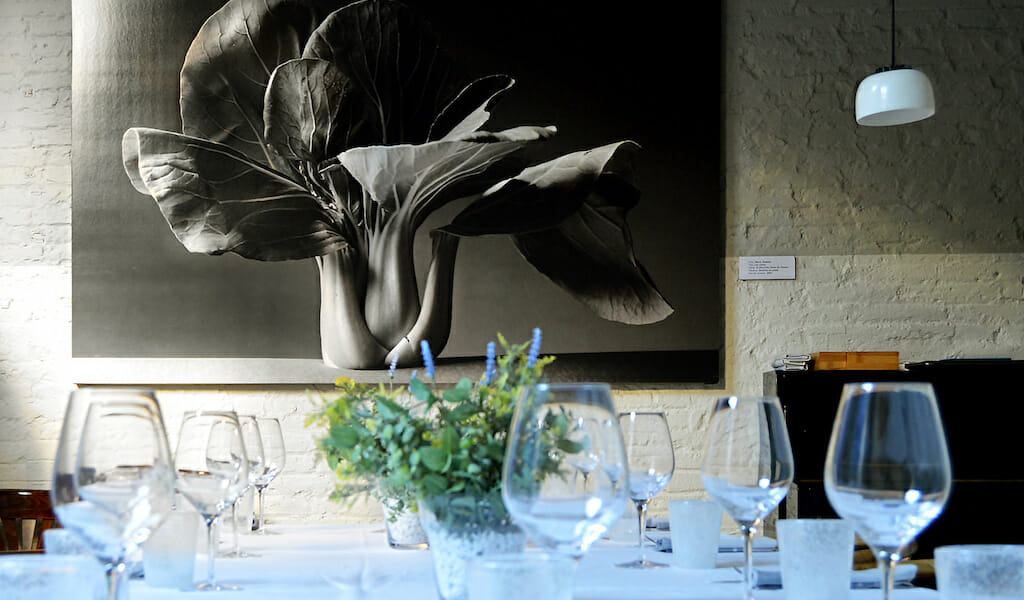 Barcelona | By Paula Mourenza
By Paula Mourenza
BarcelonaVegetables often get short shrift at restaurants – greens, legumes and tubers are relegated to the same tired side dishes, or just one component of many in a generic main, subsumed by the dish’s other ingredients. Not so at GatBlau (literally BlueCat in Catalan), located in the Left Eixample. This restaurant is a shrine to vegetables,…