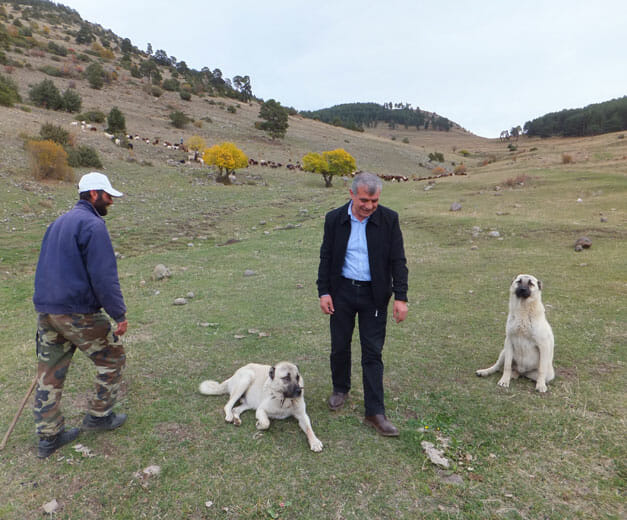 CB on the Road: The Lambassador from the East

Şehzade Erzurum Cağ Kebabı is one of our favorite places in Istanbul for a satisfying, lamby meal. You could easily walk past its handful of outdoor tables, tucked into a bustling pedestrian-only shopping street in the Sirkeci neighborhood. But if you stay, proprietor and head grill master Özcan Yıldırım will make you an unforgettable dish. Cağ kebabı flips the ubiquitous döner concept on its side: Think layered lamb, lamb tail fat, garlic and spices, roasted on a horizontal spit, in front of a blazing wood fire. As the giant lamb cylinder’s outer edges caramelize, the grill master deftly slides an offset skewer into each glistening morsel, slashes the tender pink meat free from the mothership and repeats this process until your skewer is loaded up with perfect bites of lamb.

You are urged to eat straight from the skewer, but if you are feeling more refined, wrap fresh lavaş bread around the kebab and slide off the lamb, then add spicy fresh tomato ezme salad and buffalo milk yogurt to complement the smoky meat. As the hot, garlicky lamb fat hits your tongue, a primordial urge rises up from your civilized belly and you feverishly devour skewer after skewer until you hold up your hand in bittersweet surrender, and the grill master diverts the next round to another expectant customer.

Yıldırım is more than just the proprietor and head grill master of Şehzade, which he started in 1989. He also raises lambs near his hometown of Kosor to supply the restaurant with 175 to 220 pounds of lamb per day – farm to table before it was hip. Kosor is a village northeast of Erzurum, which is in the far east of Turkey. We wanted to figure out why Şehzade’s lamb reigns supreme over all others, so we hopped on the five and a half hour flight to the homeland of cağ kebabı. 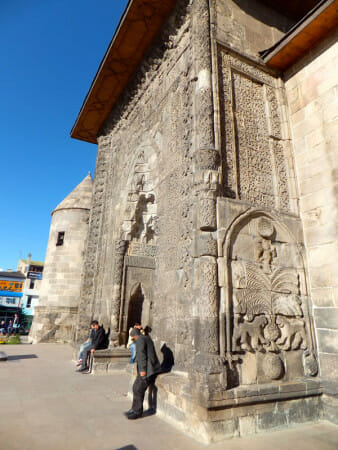 Erzurum is infamous for being cold and, sure enough, we arrived just in time to see winter’s first snow dust nearby Palandöken Mountain. The city is centered around the Yakutiye Medrese, an intricately carved stone educational and religious center built in the 14th century. Residents bundled up against the wind and bustled around the city square, ducking into modern, nondescript concrete buildings to warm up and do their weekend shopping. We wandered away from the city center, toward the old citadel, along quiet, narrow, winding streets. Through a dusty shop window we saw a coppersmith pounding out a giant cooking pan, and round the corner a horse-pulled cart jostled by carrying massive cabbages and turnips past a bakery.

Erzurum is not a tourist town – the mood is reserved, serious and religious. Suitably, the region is famous for an opaque black amber called oltu taşı, set into weighty gold rings that adorn men’s fingers around town. Luckily, we had a few boisterous college student guides who didn’t let the chilly vibe dampen their moods. They led us to their favorite soup joint, called Çorbacı Ağa, close to the main square, where white-aproned ustas stirred half a dozen giant pots of soup. We warmed up with a creamy, tart yogurt and barley soup – a lip-smacking, balanced bowl that settled our bellies. But we didn’t come all the way to Erzurum for soup (although after those first few slurps we started thinking that maybe we should have), so we bought a bus ticket and headed out into the surrounding hinterlands to meet Yıldırım’s sheep.

Vast rolling hills expanded on either side of the road leading north from Erzurum. Farmers spread compost on their fields with horse-pulled carts before the frosts sealed up the ground. Gradually, rounded stone cliffs rose up beside us, shot through with red- and lime-colored veins. The road began to wind gently to follow a river’s curves. There aren’t many buildings out here in the plains, just farmland, pasture and a big sky. Late fall light muted the landscape and lulled us into a few naps along the four-hour journey.

Kosor is a one-street village, nestled against dramatic cliffs that offer residents protection from the cold winds. The village straddles an ancient cow transport road from Iran that still functions today. We stepped out of the bus and followed the smoky meat smell to Öz Kosor Cağ Kebap to meet Yıldırım, who was in town to visit family and check on his sheep. Shortly after we sat down with the cağ kebabı master, a waiter brought us lamb skewers, accompanied by blistered spicy green peppers, blackened tomatoes and fresh crusty white bread. These lamb morsels were sliced thinner than Şehzade’s and tasted purely of lamb and wood, with less fat and not much spice beyond salt. 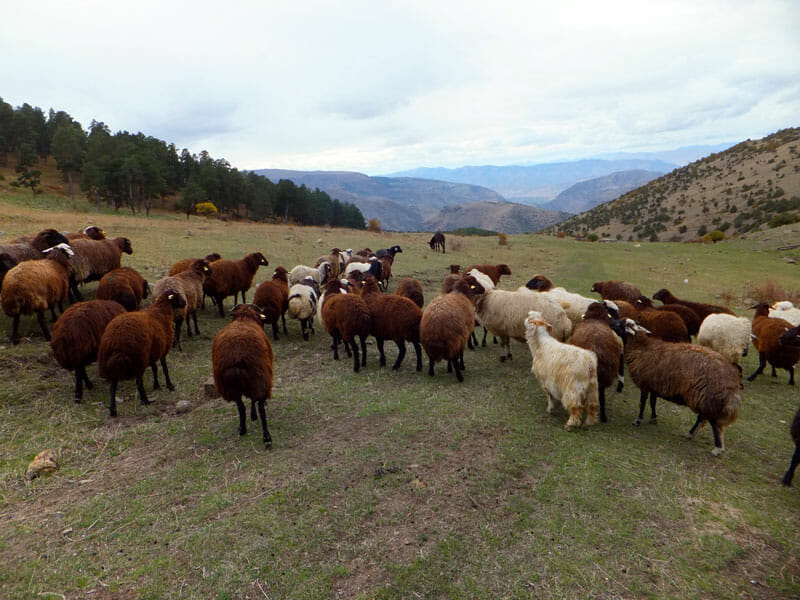 We tucked into the cağ kebabı with Yıldırım, who is ever at ease and appeared even more relaxed on his home turf. He has a friendly, intelligent face, with a boyish glint in his brown eyes, salt-and-pepper hair and a few deep forehead wrinkles that he’s earned after 40 years in front of the fire. We asked why he moved from Kosor to start a restaurant in Istanbul, and he explained: “Cağ kebabı has existed here for centuries, but it is not enough for it to just be here. It needed to be introduced to the outside world, and someone had to do it.”

Luckily, the local specialty found a dedicated, talented ambassador in Yıldırım. He insisted that true cağ kebabı “can only be made with milk-fed lambs that grow up in nature.” More specifically, here in Kosor, where “the lambs graze in the meadows, where the weather is better, the water is better, it is very clean.” This is in contrast to lamb farms near big cities, where, as Yıldırım put it, they eat “artificial foods so that they grow up more quickly.” That purity comes through in the lamb at Şehzade: It offers a fleeting taste of the wild amidst Istanbul’s urban grit.

“Let’s go and see the sheep,” said Yıldırım. We cruised up to the higher-elevation meadows in his weathered sedan. A storm brewed on the horizon, and Yıldırım’s co-pilot, an old friend, looked warily on as the paved road turned to dirt. “This will be impassable when it starts to rain,” he said ominously. “If you had come a few months ago, we could have visited the sheep high up in Allahüekber Mountain,” Yıldırım explained, “but now it is too cold and snowy.” Yıldırım’s friend pointed out that Allahüekber (“Allah Is Great”) Mountain is well known because “90,000 of Enver Pasha’s soldiers were martyred there.” Enver Pasha, the famous Ottoman-era military leader, was responsible for a World War I campaign in which the Turkish soldiers were unprepared for the harsh winter and froze to death while fighting against Russian soldiers.

After a few semi-harrowing hairpin turns, we arrived at the shepherd’s outpost, a small hut next to a tidy pen. Pine trees encircled the clearing and remained steadfastly green against the oncoming winter. We turned around to see the hut’s view of undulating purple-brown mountaintops and deep river valleys, covered by a white blanket of clouds. This land is common property, explained Yıldırım, and he rents it for a few months every year from the village. At first the place was silent, with no sheep or shepherds in sight. We walked past the pen toward the hillside, and after a few minutes we heard bells jingling in the distance. Sure enough, 300 ruddy-red and cream-colored Karaman sheep rambled toward us over the hilltop. 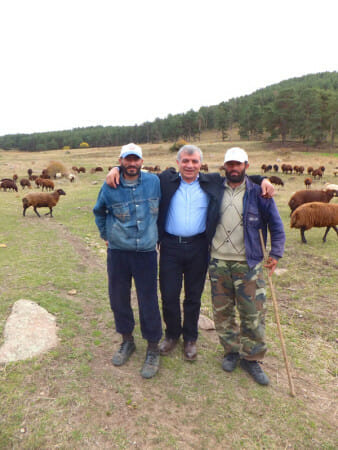 Two shepherds with wooden staffs guided the flock, aided by their two imposing white Sivas Kangal sheep dogs, a rugged Turkish breed. The shepherds were wearing an eclectic mix of warm-weather clothes – camouflage pants, a denim jacket, a fleece and baseball caps. “They are brothers and have worked for me for six years,” said Yıldırım. “Stock-raising is a way of life here.” The shepherds spend the summer with the sheep in the higher-elevation Allahüekber Mountains and guide the flock through these lower meadows before taking refuge in their nearby village during winter. “There are all kinds of herbs, like wild thyme, and flowers in the mountains, so the lambs get deliciously fatty come autumn,” says Yıldırım. “But in the winter the lambs eat dried grass, so their taste changes.”

Shepherding is dangerous for the men and dogs because they have to fend off wolves and bears. One of the dogs had fresh blood on him from a recent tussle with a wolf. The dog wears a thick leather collar studded with three-inch-long metal spikes to protect its neck during these fights.

Clouds darkened above us, so it was time to leave. The ominous skies didn’t dampen Yıldırım’s enthusiasm to share his craft, so after we descended the dirt road, he drove along a safer gravel road to a yonder pasture. His father was also a cağ kebabı usta and started to teach Yıldırım at age nine.

“When my father got older, he stopped cooking, so I started to make cağ kebabı after school, and I’ve continued since then,” said Yıldırım, as horses and golden trees dipped behind rolling hills outside the car window.

The origins of cağ kebabı began with kaçakçı kebabı, or smuggler’s kebab; then it became ahbap kebabı, or friend kebab, he explained. Three to five friends would buy a whole sheep or goat, layer the meat on a spit, roast it in a house’s fireplace and then eat it all together. “It became very popular,” he said. “Everyone cooked cağ kebabı at their homes; then people began to sell the cağ kebabı at outdoor markets.”

On our return to Erzurum, we visited a few of the city’s popular cağ kebabı establishments, but none were as delicious as Yıldırım’s back in Istanbul. We’re sure there are lust-worthy cağ kebabı spots hidden in Erzurum’s shadowy side streets, but we’re content knowing that Şehzade can always satisfy us in Istanbul. “The reason we are in Istanbul is because we love our job,” said Yıldırım. “I intended to introduce cağ kebabı to the whole world, and I hope it has happened.”

Istanbul | By Istanbul Eats
By Istanbul Eats
IstanbulIf there are an estimated 17 million souls in Istanbul, then there are at least that many opinions on the best kebab house in town. There are stodgy oak-paneled rooms with country-club appeal, where well-dressed businessmen marvel at heaping plates of delicious grilled meat. And there are 24/7 hole-in-the-walls, where lines form out the door…
Çorbacı Ağa
Erzincan Kapı Caddesi 8, Erzurum
Tel. +90 442 237 8181