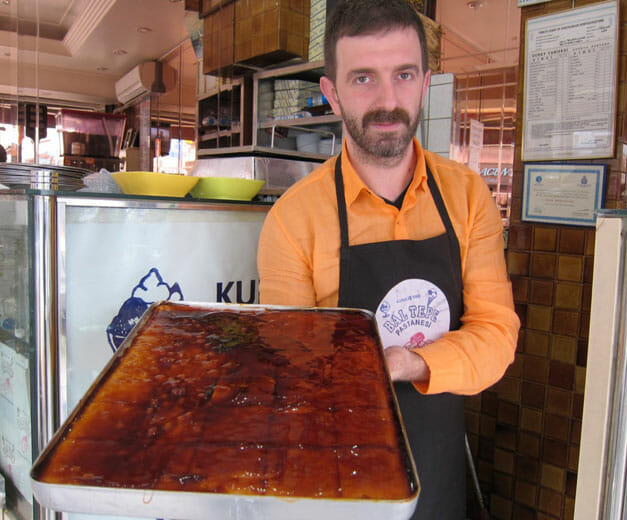 Trileçe: The Balkan Cake of Mystery

It’s hard to imagine Istanbul without its pastane windows stacked high with trays of ivory-colored flaky mille-feuille and coolers lined with row after row of chocolate-topped éclairs. And of course, the sweets scene in Istanbul would not be complete without the much-loved profiterole. Generations of İstanbullu have taken pleasure in these French exotics, but at some point they became part of the local dessert canon, complete with their new Turkish ID, milföy and ekler. Their origins, their journey to Istanbul, if still relevant, have been more or less wiped clean from the memory of the city.

But right now, a new dessert craze is gripping this city: trileçe (pronounced tree-le-che). Trileçe’s heritage is a lot more complicated than that of the éclair. Chasing down the elusive origins of this cake – a Balkan cousin of the Latin American classic tres leches – leads to a deep, dark, global rabbit hole. According to the blog of the James Beard Foundation, “The history of tres leches is ambiguous.” The writer points out that it is common throughout Latin America and probably has its origins in Nicaragua, Mexico or Guatemala. It is also posited that the recipe is a creation of the producers of its key ingredient, canned milk. In the 1940s Nestle printed this cake’s recipe right there on cans of its condensed milk, just as Jose Cuervo does for its “perfect margarita.” But the Cuervo folks didn’t invent the margarita, did they?

But back to Istanbul. We’ve been following the movement of trileçe all over the city and it is spreading fast. Just in the past couple of years, it has made its debut in sweetshops, from modern Etiler all the way down to the historic Grand Bazaar. There are wholesalers of this cake supplying restaurants all over town. Tuğra Restaurant, at the Çırağan Palace Kempinski hotel on the Bosphorus, includes it on the menu as a signature dish. But even more significantly, trileçe has breached the seemingly impenetrable bulwark against fads, working its way into even Köfteci Arnavut, a third-generation, exceedingly old-school meatball shop where the menu has not changed since 1947.

In this setting of fierce competition, it is no wonder that trileçe makers are hesitant to share their recipe. At Köfteci Arnavut they claim to mix kaymak, the heavy cream of water buffalo milk, and cow’s milk together for the characteristic soak given to the cake. At Baltepe Pastanesi, İdris Beğiroğlu called his recipe a secret but admitted that there was plenty of krem şanti, whipping cream, in there. Tuğra’s menu lists it as a cake of three milks – cow’s, goat’s and sheep’s. Istanbul, a city where condensed milk is not readily available, has adapted its own recipes, among which there is no real consensus. Yet still they all estimate the same desired effect. After tasting trileçe all over Istanbul, we have the same recurring vision of someone accidentally knocking an extra-large Thai iced coffee all over a slice of vanilla birthday cake. We love cake and Thai iced coffee on their own, but a bite of trileçe squarely hits a spot for us that Turkish desserts rarely even tickle. Depending on the baker and his preference for normal flour or semolina, the cake is either more fluffy or crumbly, but that hallmark cloying effect of the cream and that ultra-sweet caramel topping are the common points to which all trileçe conform.

In our search for Istanbul’s trileçe roots, a tip on Twitter led us to Baltepe Pastanesi, near the weekly Fatih bazaar. This small corner shop, with its handsome old cooler and list of traditional desserts on the wall, had the innocent feel of a neighborhood hangout, like Arnold’s in “Happy Days.” A young couple at the next table shared a rice pudding.

Before we could even say “trileçe,” a tray of the stuff was hauled in by a man in baker’s whites. This trileçe procession was something we got used to during our visit. “It’s the thing we sell the most of,” said Osman Beğiroğlu, whose grandfather opened the shop back in 1956, the same year he arrived in Istanbul from Macedonia. According to Osman, Baltepe was the first to introduce trileçe to Istanbul. And it all started when his uncle İdris went back to their hometown of Kalkandelen (Tetovo) in October of 2010. As chance would have it, İdris was on hand to give this story firsthand.

İdris Beğiroğlu was born into a family of Albanian bakers in Macedonia in the early 1950s. When his family immigrated to Istanbul in 1956, several members stayed behind to tend to the family baking business. According to İdris Bey, that business still exists today under the name Amphora, just around the corner from the Clock Mosque in downtown Tetovo. In 2010, İdris was there visiting his cousins when he tasted trileçe for the first time. “It was really something different,” he recalled. His cousins gladly showed him how to make it. They told him that they’d just learned it themselves from another cousin, who picked up the recipe in Italy.

İdris Bey returned to Istanbul in December and started making trileçe at Baltepe. “Nowadays, look left, look right, and you’ll see trileçe. It’s even up in Emirgan,” he said, sounding perplexed about the fact that his cake had made it to the tonier neighborhoods up the Bosphorus.

Seeing his great contribution slip from his hands, İdris Bey attempted to trademark trileçe under the Baltepe brand. This was rejected. He told us that he is now in the process of trademarking what would be translated as “Baltepe Special Trileçe,” and spoke with confidence that the paperwork would come through.

We enjoyed a square of caramel-topped trileçe with İdris, appreciating the density of the soaking agent, its secrets guarded behind a wry, satisfied grin. Each bite went down smooth and cool as the milk was released from the cake.

We told him that it resembled a cake from Mexico that was popular in the United States, not coincidentally called tres leches. Without blinking, the man who attempted to trademark trileçe said, “Of course, it’s an old Spanish cake as far as I know. Maybe Portugal.” Following the trileçe trail, we stopped in at upscale Tuğra to speak with the head chef there, Ahmet Kara. Describing this cake’s proliferation, Kara said, “Think of it like baklava. Albanians might have started it, but now everyone makes trileçe.”

Including him. He first tasted it at a humble grill joint down in the working-class Kağıthane district in 2012, noting its “lightness and good balance.” The restaurant manager refused to share the recipe with him so he took his research online and, via Facebook, found someone, an Albanian, who would. According to this recipe, the three milks of trileçe include goat, sheep and cow’s milk. Ahmet Bey admitted that sheep’s milk is difficult to source in Istanbul, so he uses water buffalo cream instead.

(It should be noted at this point that a popular Turkish culinary travel show, hosted by Mehmet Yaşin, the Anthony Bourdain of Turkey, featured trileçe on its Kosovo show and sourced the same recipe.)

Whether this is a misinterpretation or a variation is less important than the result. Ahmet makes a trileçe that suits the gilded dining room of this former Ottoman palace. Rather than squares cut from a sheet cake, he makes each cake individually like a muffin and soaks it in his three-milk mixture. Over that he drizzles homemade caramel sauce and garnishes it with fresh berries and a crunchy poppy seed-covered cracker that looked like the tip of a Janissary’s spear. Excellent materials make for an excellent trileçe. The sweetness is concentrated in the caramel topping, leaving the cake to carry milky richness. Each part does its job, and the result is light and, we suspect, better balanced than its inspiration down in Kağıthane. 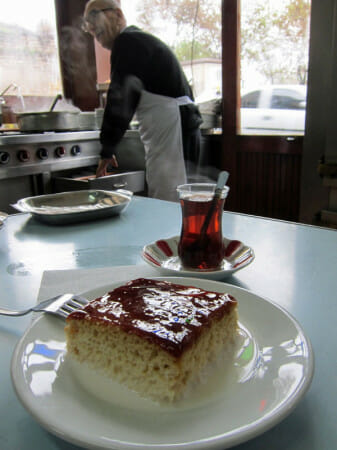 In the context of his restaurant, which bills itself as the “ultimate Ottoman dining experience,” we asked Ahmet Bey how the cake fit in. “It’s from Rumeli [term for Ottoman territory in Europe] so it is Ottoman cuisine. Therefore, we own it,” he said.

Finally, weary from the chase, we headed down to Köfteci Arnavut, one of our old köfte standbys, where we had heard that trileçe had recently been spotted. If anyone would give us the straight scoop, it would be the İştay family, who have run this humble restaurant for more than 60 years. Ali İştay, the 81-year-old owner of the place, called it a “traditional Albanian cake,” which he claims to remember his mother, an Albanian immigrant, preparing for the holidays as far back at 1946. His restaurant, however, just added it to their menu seven months ago. “It was just something made at home. It wasn’t as popular as it is today,” he said.

We’re still not sure if we believe that İdris Bey at Baltepe was the first to launch trileçe commercially in 2010, though we could not find anyone selling it prior to him. Could Albanian families all over Istanbul have been keeping this cake a secret from the rest of the city since 1946, as Ali Bey’s memory would indicate? These are difficult questions to answer definitively.

One website on the Albanian language explained that the cake’s Albanian name trileqe (pronounced tree-le-che) was simply the Albanian spelling of foreign words coming from the Spanish tres leches. If this national favorite was introduced to Albanians before traveling to Istanbul, then when and by who? After how many years of being an Istanbul pastane favorite will trileçe’s true origin, whatever it may be, lose its relevance? When will it become Turkish? The rabbit hole goes deeper, but we’ll keep digging, dessert spoon in hand. 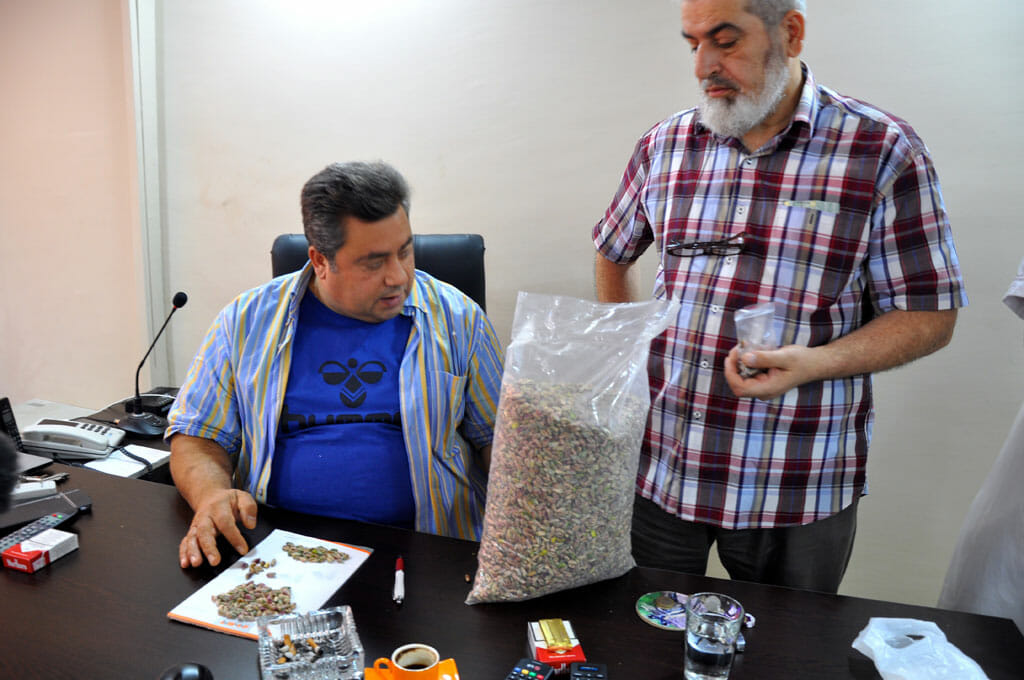 The Syrian Kitchen in Exile | By Lauren Bohn
By Lauren Bohn
The Syrian Kitchen in Exile“It is betrayal,” As’ad Salloura declared from behind his giant wooden desk at the Salloura factory, tucked away on the outskirts of Istanbul. From here, he runs the transplanted 150-year-old sweets empire that is his family’s namesake. It had been three months since he’d last seen Ahmed, his most cherished employee, Rashed, another integral part… The Syrian Kitchen in Exile | By Lauren Bohn
By Lauren Bohn
The Syrian Kitchen in ExileIt was a hot, humid June in Istanbul. A deadline hovered over Ahmed. He gave himself three months to make the biggest decision of his life: Would he stay? Or would he go? The reasons to leave Istanbul far outnumbered the ones to stay. He was working day and night for a salary that barely…