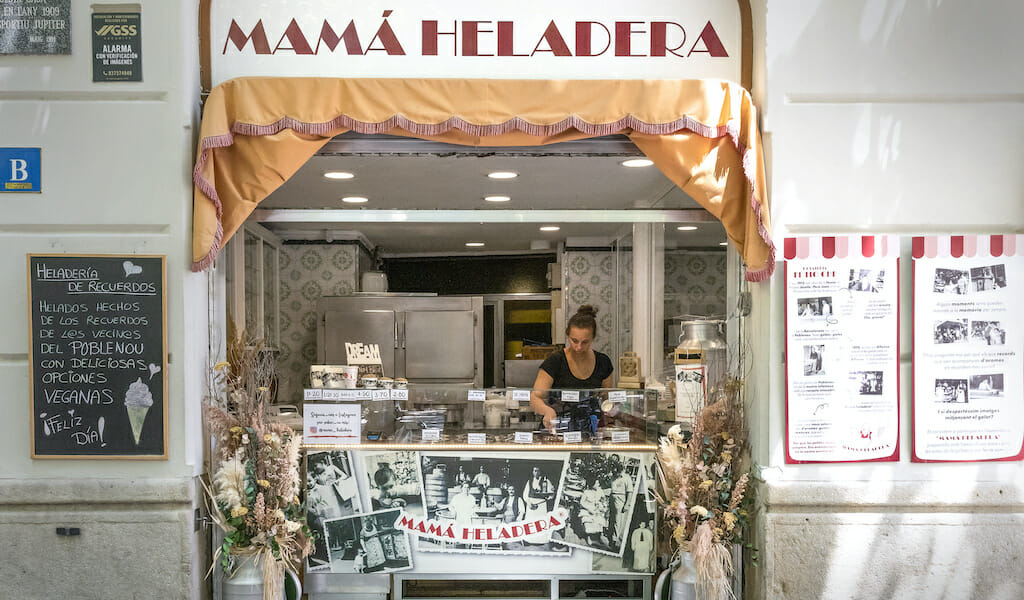 The smell of clean clothes with a lavender sachet from grandma’s closet; the family farm in nearby Lleida province during summer with apple trees and wild aromatic herbs growing all around; peaches washed in seawater during a beach day; an afternoon snack of popsicles while playing under the pine tree in the garden. These are just some of the memories that neighbors left in the mailbox of Mamá Heladera in Barcelona’s Poblenou, where owner Irene Iborra turns them into gelato flavors – an initiative that was recently awarded by the Barcelona City Council as best new innovative business (XVII Premis Barcelona Comerç).

Mamá Heladera sits next to Tío Che, a classic horchateria and ice-cream parlor on Rambla del Poblenou that opened in 1912. Irene is part of the fifth generation of Tío Che, and though she had plans to travel and take a different career path, she returned to work at the family business when her mother fell ill. It was during this time that she changed her mind, fascinated with the world of ice cream. “I fell in love with what the ice cream generates in people – the search for a perfect moment,” she says. “I love that about this place.” 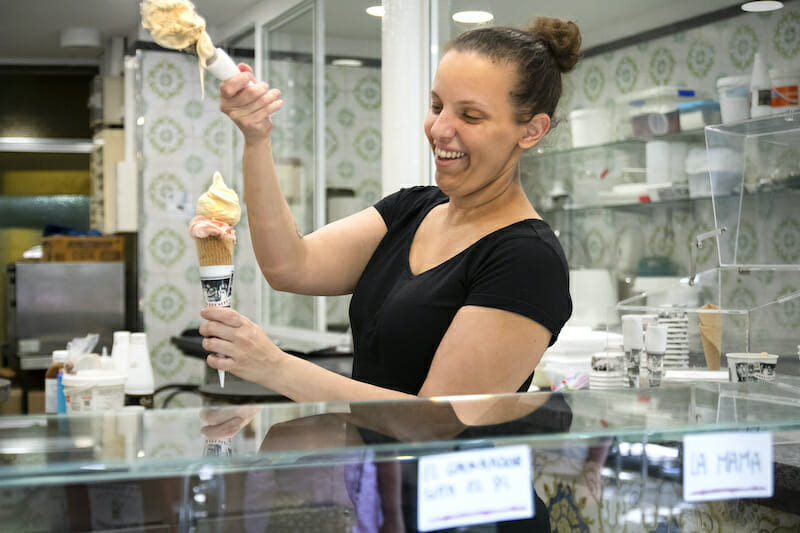 For ten years, Irene worked at Tío Che alongside her father, who taught her the technical basics and processes. She went on to complete culinary studies at the prestigious Hofmann Cooking School of Barcelona, where she became interested in neurogastronomy, the connection of neuroscience and cuisine. “I had to do a project about spices, and it was so difficult for me to recognize them that I started to associate smells with memories,” Irene says. “I knew that if this happens to me, it will happen to other people too, even if the memories were different. And if you create this association, the story behind the smell is so powerful that people will start to make a similar connection.” She began to research how she could apply this concept to the ice cream making techniques she had learned at Tío Che.

She and her family transformed the part of Tío Che formerly dedicated to sandwiches into a new section dedicated to her innovative project. As Irene explained to us, “I asked myself: why do people, the same neighbors, come here again and again, to Tío Che? What do we have apart from ice cream quality? There many other things – it is a connection through their memories. And how do we generate this connection with new people? The idea was to create new memories with the new neighbors and visitors to start new connections.” 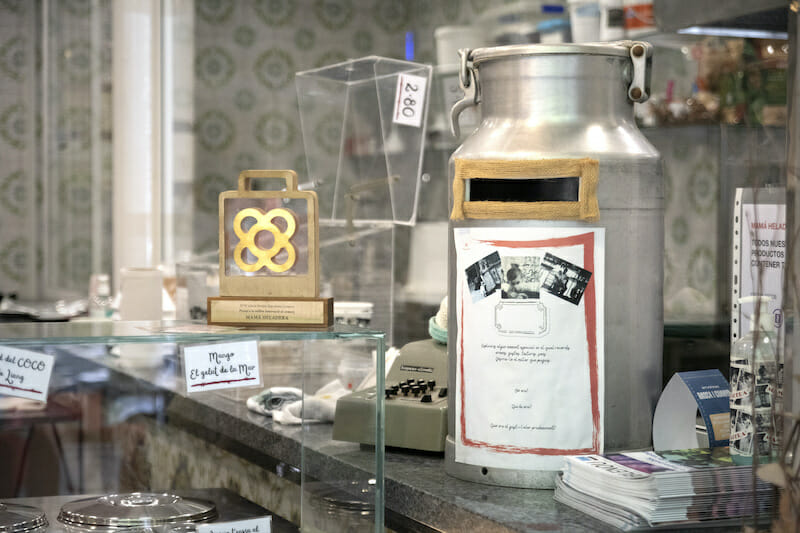 This project has created a selection of gelatos that combines a triple experience of flavors, stories and subjective response from customers that makes for a fascinating experience. When people started submitting their ideas, Irene received not only abstract experiences, but also very specific flavors from their childhoods, like the memories that migrant neighbors have brought from their home countries – the traditional cinnamon ice-cream of Bolivia, or an amazing passionfruit smoothie made by neighbor Aishwary’s mom in India, which now has a gelato version at Mamá Heladera that bears his name.

The first memory Mamá Heladera recreated, still available to taste in shop, is “Grandma sends you to the cherry tree for a snack” (“La abuela te manda al cerezo a merendar”). “We asked around about familiar smells from people’s relatives, and the most mentioned one was the aroma of lavender from the grandmas, which was used to aromatize closets and dressers back in the day,” Irene explains. “We combined it with a touch of cherry, from the combined memory of climbing cherry trees.” 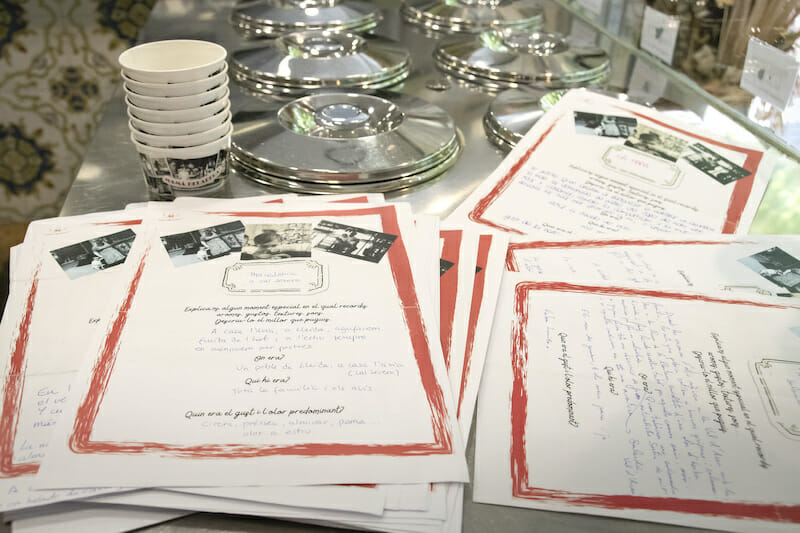 “El Coco del Liang” is another flavor based in the collective experience of the first Chinese restaurant in Poblenou, which opened thirty years ago. “This was a very industrial area, and many neighbors remember the day when Liang opened his restaurant and we went for the first time – everybody flipped out over it, and now this frozen coco [coconut] is a shared memory associated with Liang, who still has his restaurant here. It was very exotic for the families of Poblenou!” says Irene.

The “Mantecado” is an ice-cream that Irene’s grandfather used to make in Tío Che, and now we can find it at Mamá Heladera. “The recipe of this gelato was lost, because my father doesn’t offer it anymore. So, to recreate the flavor of mantecado (a traditional Christmas sweet from Andalucía made with flour, lard and sugar, plus aromatic ingredients like lemon zest or cinnamon), we asked a lot of the older neighbors to describe the exact memory they have of that flavor. We finally did it with vanilla and egg yolk, and it was a whole big thing to find the right proportions.”

Another fascinating flavor is named “Swing under the pine eating redcurrant popsicles.” The flavors evoke a memory of a hot summer day under the pine trees, eating popsicles made at home with a store-bought redcurrant syrup. Mamá Heladera uses honey to conjure the scent of warm pine, mixed with the more acidic natural redcurrants, and the result is a soft, aromatic, calming and delicious light pink gelato that we can’t get enough of. 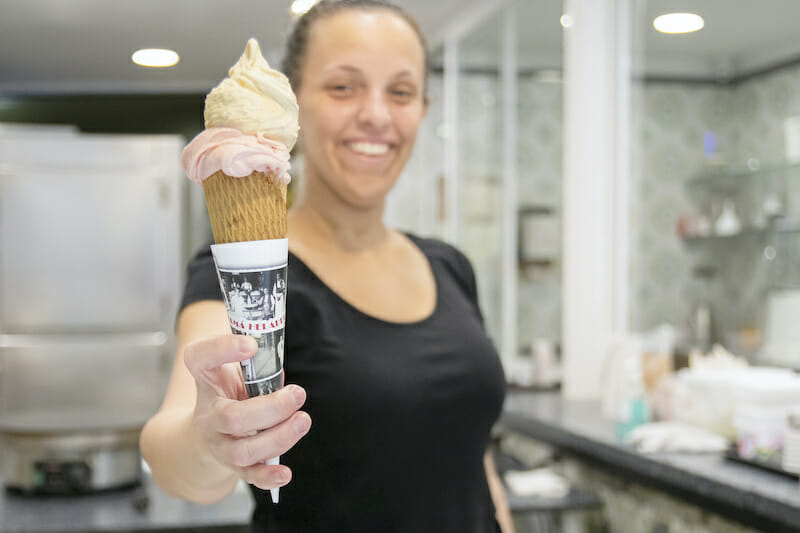 All these gelatos are delicious, but the experience is never complete without the story behind the flavors. One of the best examples is the gelato called “Honey and salt,” based in the book Mother of Milk and Honey written by author Najat El Hachmi, a mother who left her village in the Rif Valley (Morocco) to migrate to Barcelona, crossing the Mediterranean. The flavor uses milk and honey, but also salt to represent the Mediterranean Sea crossing as a symbol of migration.

Of course, as Irene insists, the perception of flavor is subjective, and the meaning and feelings are always going to be different for each person. This makes for a very organic and unique experience with each new gelato she creates. Mamá Heladera has harnessed the power of smell as an amazing time machine, but the past is never the same for all of us. We asked Irene about her personal favorite: “The flavor that awakens the most emotion for me is the one of rosemary, thyme and honey,” she said. “It reminds me of the days we spent in the countryside with my parents; it really warms my heart. But maybe for others, the scent of thyme is associated with the remedies for colds and flus.” She adds, “It is always a game, and all we want is to create these opportunities to enjoy playing that game of perceptions and delicious flavors. It is a very unpredictable experience!” 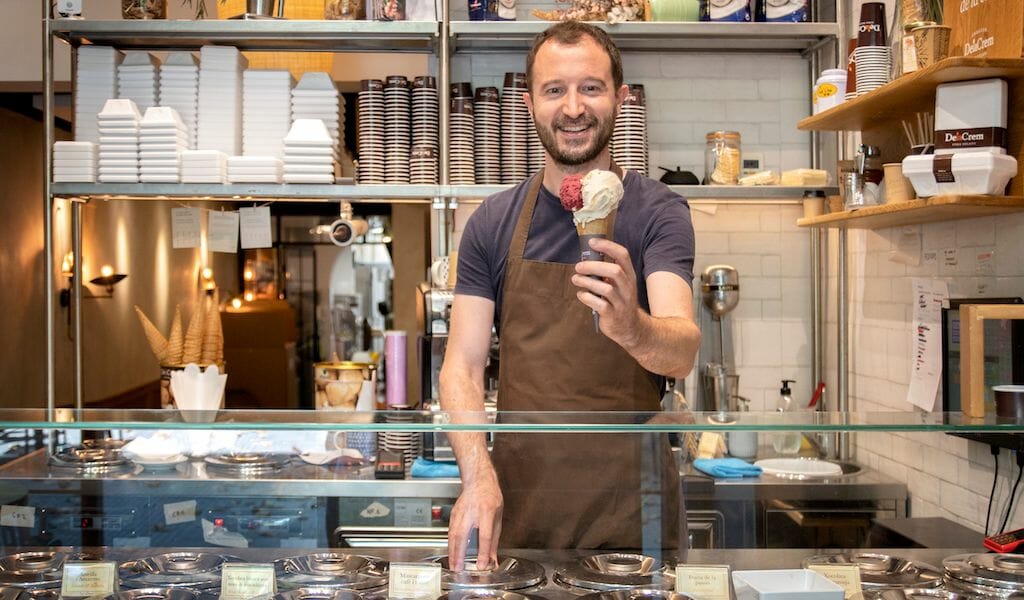 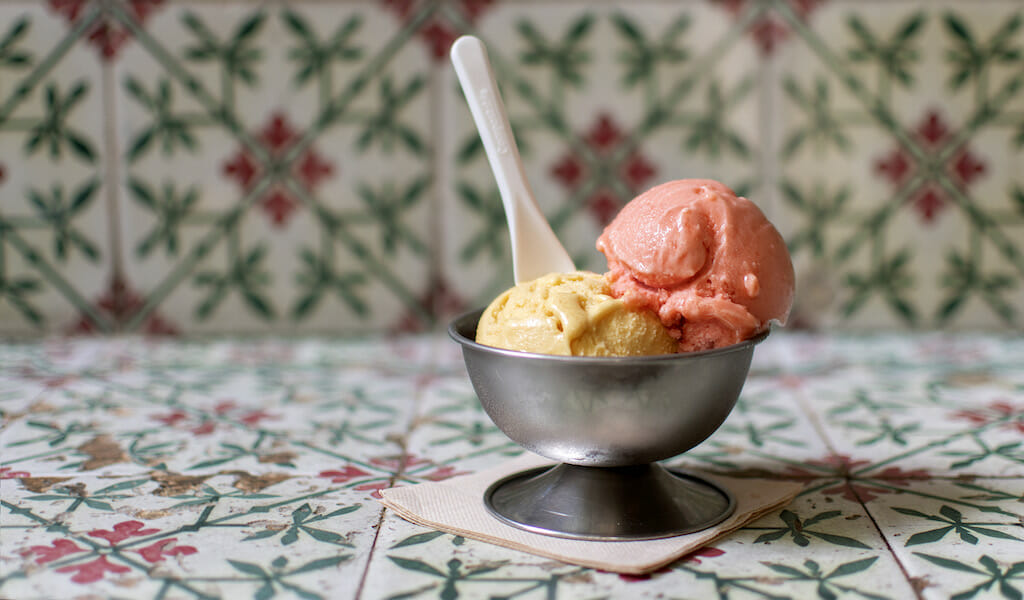 Barcelona | By Paula Mourenza
By Paula Mourenza
BarcelonaMy memories of helados (ice cream) as a kid in the small Galician town of Vigo in the 80s are mostly of the signs outside kiosks advertising Colajets (a cola and lemon flavored popsicle) and Frigo Pies (strawberry ice cream shaped like a foot) – colorful, industrial fantasies on a stick. The quality ice creams… 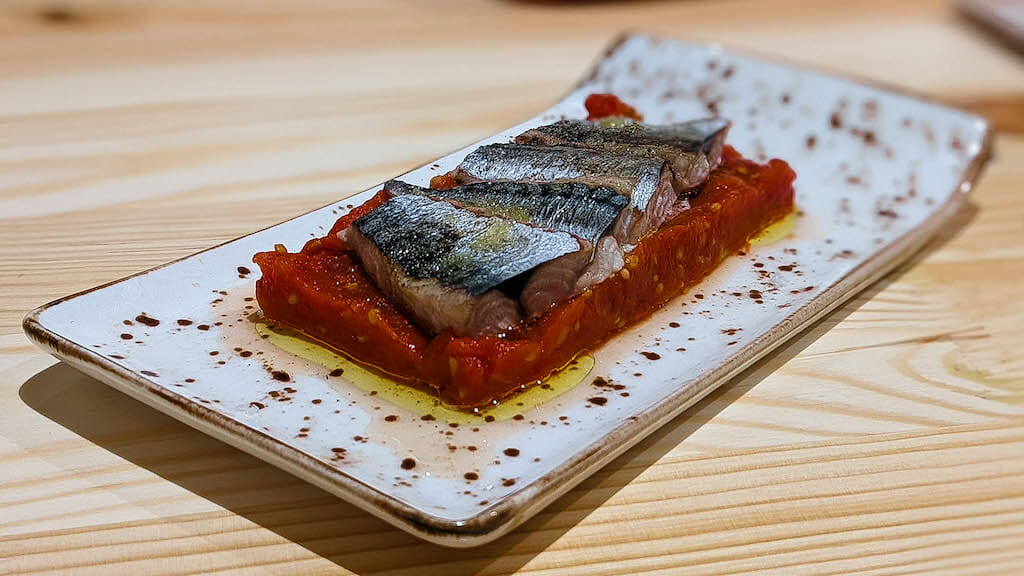 Barcelona | By Lior Shechori
By Lior Shechori
BarcelonaStrolling down the streets of El Clot, you’ll encounter all the usual suspects of a typical residential Barcelona neighborhood: a small butcher, a multigenerational deli, a hole-in-the-wall bar and, of course, a couple of bodegas. Bodegas are the social and culinary epicenters of Barcelona – this is especially true for more residential, working-class neighborhoods like…