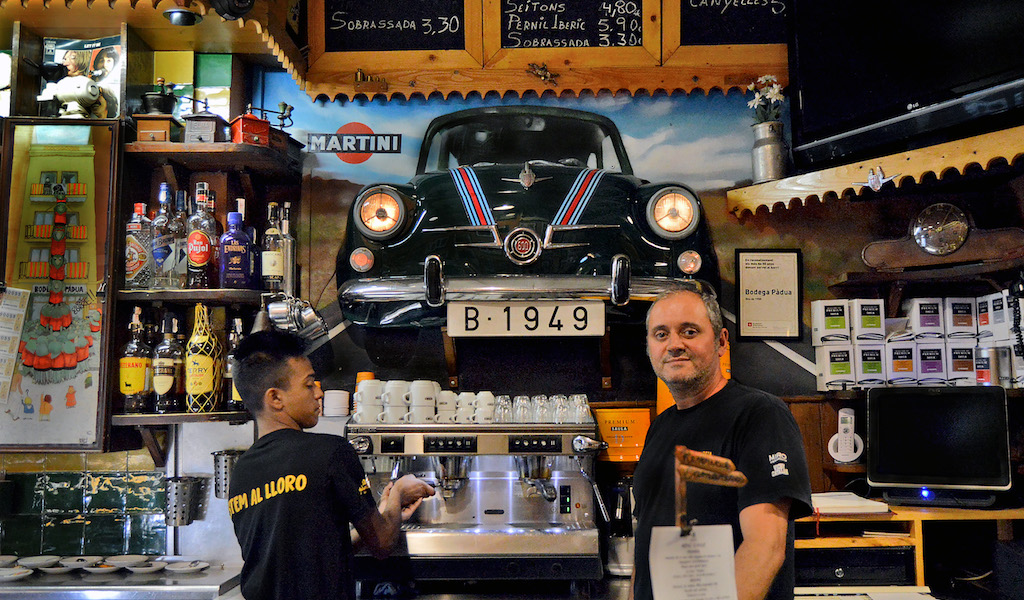 The classic neighborhood bodega in Barcelona is a place where customers feel at home. At Bodega Pàdua, an old bodega turned bar-restaurant in the El Farró neighborhood, part of the Sarriá-Sant Gervasi district, this quintessential spirit – usually invisible to the eye – is, somewhat surprisingly, physically manifested on the walls.

The long space, which extends to a patio in the back, is decorated with mementos from the community: old photos, antique objects such as radios, cameras, and typewriters, a claviharp, written tributes to local musicians and house pets (including the bodega’s beloved parrot Ricky, who is now in a “better life” but used to say hello to the clients), and even pieces of the old iconic SEAT 600 car, which still has lots of fans in Spain.

While most of these objects are the personal belongings of Bodega Pàdua’s clients, some are contributions from sponsors that complement the personality of this community. As a whole, they make a place where the food and drink is already immensely satisfying that much more appealing and welcoming. 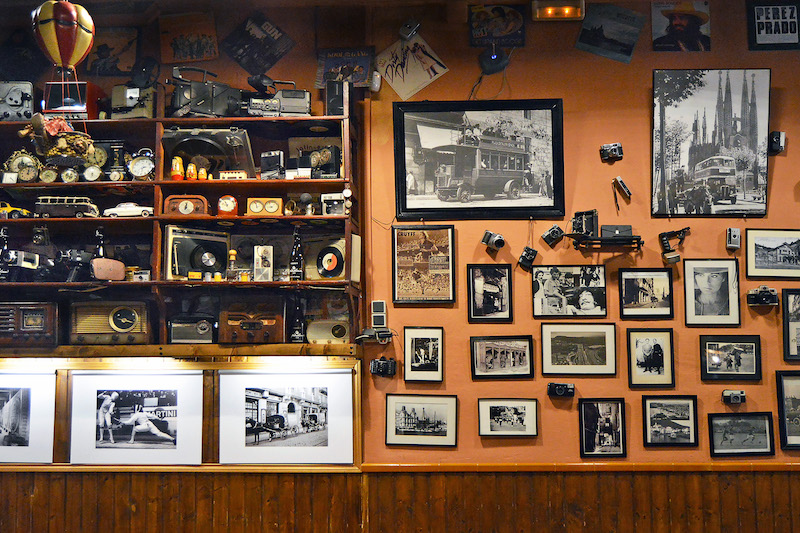 Owned and managed by Jordi Ratón Sánchez, the restaurant is just one of many former bodegas in Barcelona: It was originally opened as a bulk wine shop in 1949 by Marcial Grasa, who took delivery orders by telephone. Jordi’s father, who had worked at the bodega since 1965, eventually bought the place in 1979, and soon began renovations. He had a different vision for the bodega: The big wine store, which held 20 splendid wooden wine barrels, was transformed into a bar with a foosball table and a pool table (although they still sold wine in bulk).

For a short time, starting in 1981, Jordi’s mother cooked traditional dishes to serve at the bodega. Her delicious, affordable meals quickly became popular and transformed the business at a time when bulk wine sales were on the decline due to the proliferation of supermarkets. But when health issues eventually took her out of the kitchen, the quality of the cuisine dropped off – food took a backseat to the bar.

When Jordi took over the business in the 90s, he decided to revive the culinary offerings, hoping to recreate the popularity of his mother’s cooking. So while managing the place he also taught himself how to cook, sticking close to the old bodega-style tradition of homey Catalan cuisine. They removed the game tables and a majority of the barrels to make a new kitchen and dining room; the current Bodega Pàdua restaurant began to take shape.

It was around this time that the bodega began collecting mementos from their loyal customers. “When we were in the transition from the bodega to restaurant, we had a lot of empty wall space after removing so many barrels,” Jordi tells us. “So we hung up photos of the old bodega that we had. But then we came up with the idea of including the clients, and they were enthusiastic about bringing their own stuff.” 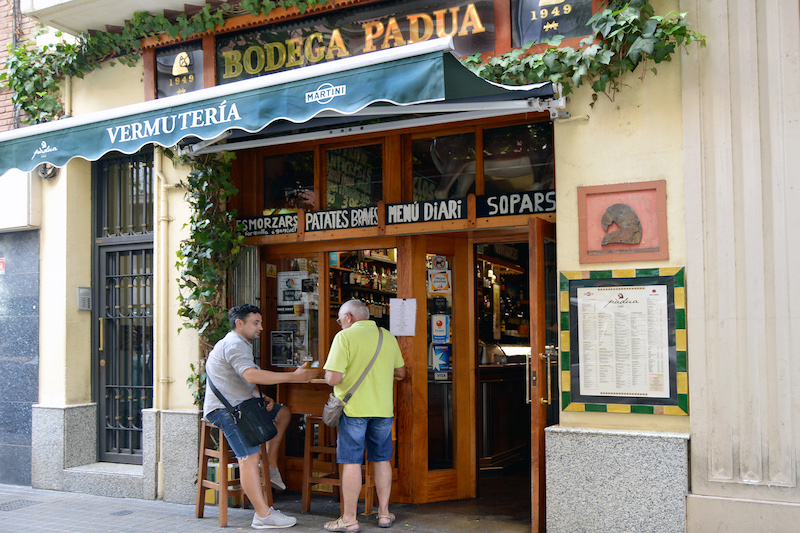 Jordi points to the section of the dining room that is covered with photos of all sizes: Some are of the old bodega, others of the neighborhood and city, while some are personal shots of the clients. Nearby are shelves that were formerly occupied by liquor bottles and are currently crowded with antiques. “Photos were first, then we started with the objects. We told the neighbors that they could loan us their antiques and take them back whenever they wanted, but normally they end up leaving them here,” he says. “And then, they love to come here with friends and say, look, that radio or this photo is mine.”

Jordi’s father-in-law was the first person to lend the bodega a few antiques for decoration, including some pieces of an old SEAT 600, a classic city car made in Spain from 1957 until 1973. When Moritz, the local beer brand they work with, saw these car decorations, they loved it and wanted to contribute somehow; they eventually outfitted the bodega with a beer tap made from a SEAT 600 motor. Thanks to all this, the bodega became the headquarters of Club 600 de Catalunya, a fan club for the iconic car, which was the Spanish version of the Fiat 600. Once a year they celebrate the SEAT 600 with a street party, inviting clients and neighbors to drink beers poured from the car-motor tap.

“We told the neighbors that they could loan us their antiques and take them back whenever they wanted, but normally they end up leaving them here.”

Jordi offers menú del día (daily specials) on weekdays for around €12, while also serving dinner until midnight. The menu features a variety of traditional dishes like beef entrecote, cap i pota, candied duck or pig feet, plus tapas, salads and cocas (a traditional Catalan bread topped with all kinds of ingredients and then baked, similar to the Turkish pide or Italian pizza), drinks and the house vermut.

On Thursdays, restaurants with menú del día in Barcelona traditionally offer paella or some other rice dish. “Thursday’s paella,” Jordi says, “is made with a lot of care” and is so good that it could be sold a la carte for a higher price. Indeed, Bodega Pàdua’s paella is an excellent surf-and-turf home-style version, made with a base of sofrito, squid rings and chopped rabbit, and also featuring mussels, prawns and perfectly cooked rice. This super tasty dish is salted to the right degree (over-salted paellas are sadly all too common) and presented in the pan that it’s cooked in. 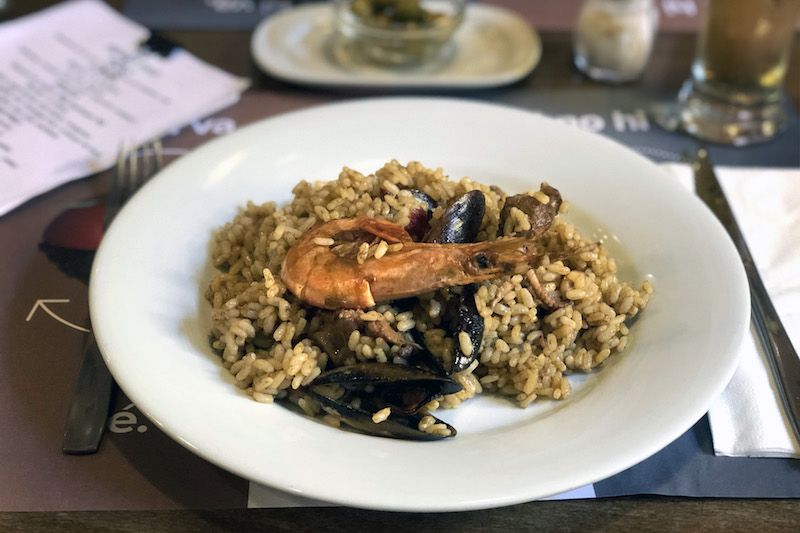 On Fridays, they offer fideuà (noodles with fish/seafood stock that is cooked like paella), and on Tuesdays, baked rice Valencian style. On Saturdays, they cook up a special dish of snails, a recipe inherited from a former employee named Jorge, who got the recipe from his grandma; it’s now a Bodega Pàdua classic.

We also love their cocas, Catalan-style flatbreads that here are a house specialty. As for toppings, there’s a long list of possibilities that range from the traditional to the less so, like the vegetable offering with eggplant, bell pepper, zucchini and mozzarella cheese. One of the more interesting combinations includes foie gras, apple paste and goat cheese. Even though they look dense, these cocas are light and won’t sit too heavy in your stomach.

While no longer a simple bodega, Bodega Pàdua is still a storeroom of sorts, except instead of wine it preserves the collective memories of the community. And this quintessential bodega spirit can be enjoyed at the same time as a delicious meal. 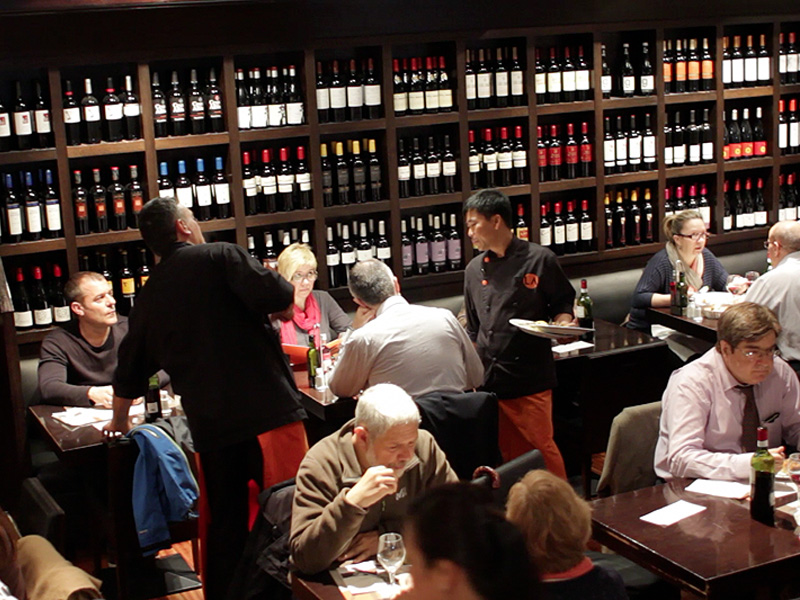 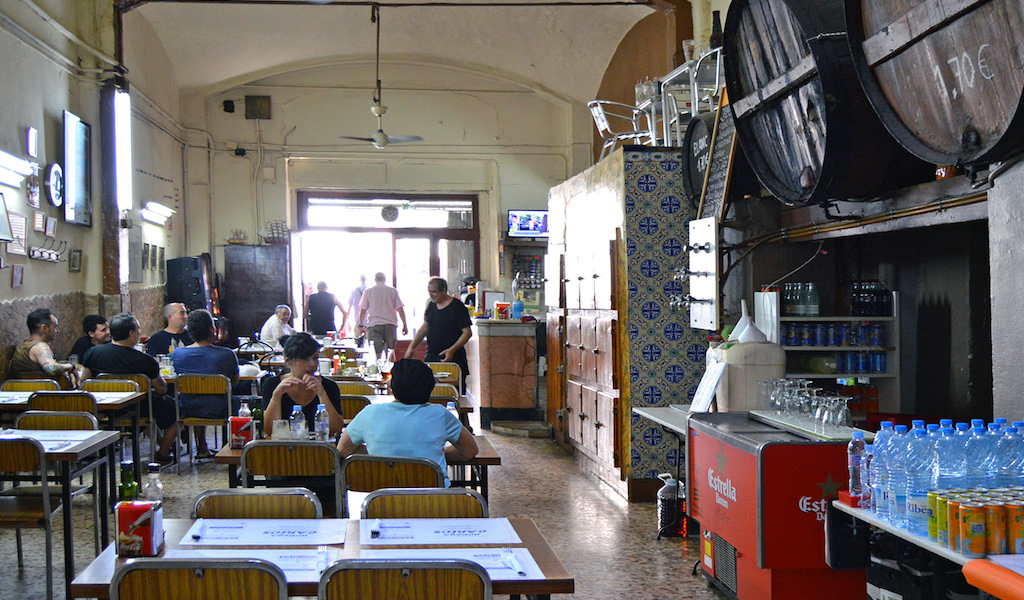 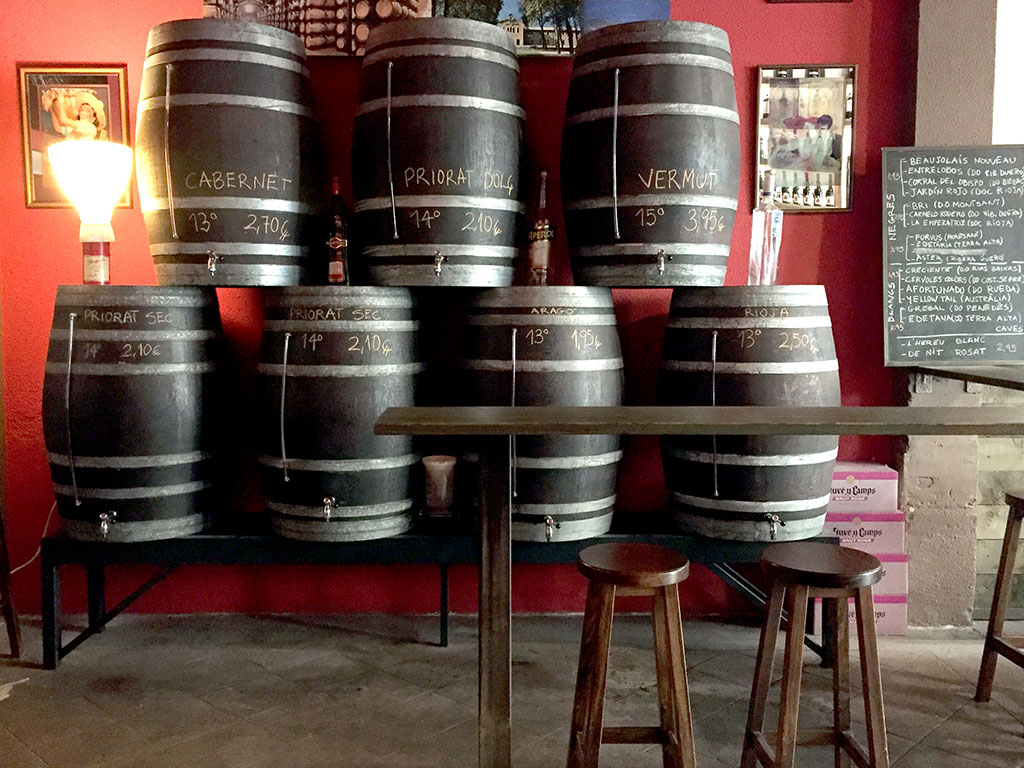 Barcelona | By Paula Mourenza
By Paula Mourenza
BarcelonaQuick bite: On this walk along Barcelona’s urban wine route, we’ll be among bodega regulars, eating and drinking our way through some of the city’s most iconic bodegas. A bodega can be a corner store or a corner bar, or sometimes even a wine cellar with a small kitchen serving refined riffs on traditional Spanish foods.…
Bodega Pàdua
Carrer de Pàdua, 92, El Farró
Tel. +34 932 12 30 56
Hours: Tues.-Sat. 7am-midnight; Mon. 7am-9pm