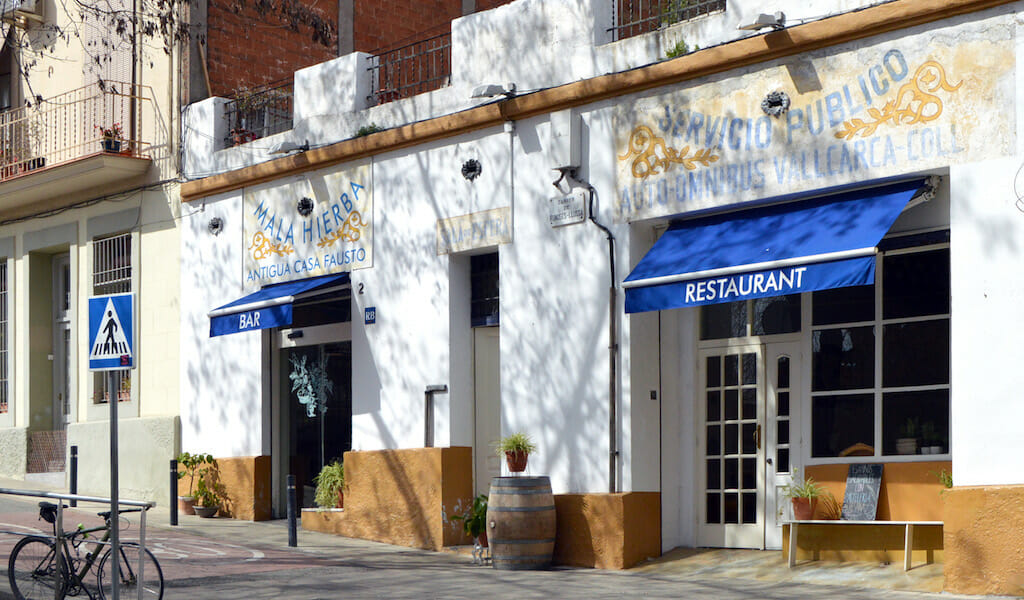 Up in Barcelona’s hills, in the El Coll neighborhood, where the city ends and the sky is cut by the spiky shapes of the pine trees in Collserola Park, Agreste de Fabio & Roser – formerly known as Mala Hierba, or “bad weed” – is sprouting up. Emphasizing sustainability and healthy eating, the restaurant is creating delicious dishes that merge Catalan and Italian traditions with contemporary flourishes.

Room manager Roser Asensi and her partner, chef Fabio Gambirasi, created this project less than a year ago and people are already singing their praises. On a recent visit, we could hear words of admiration from different guests flying around the room over the course of our meal. 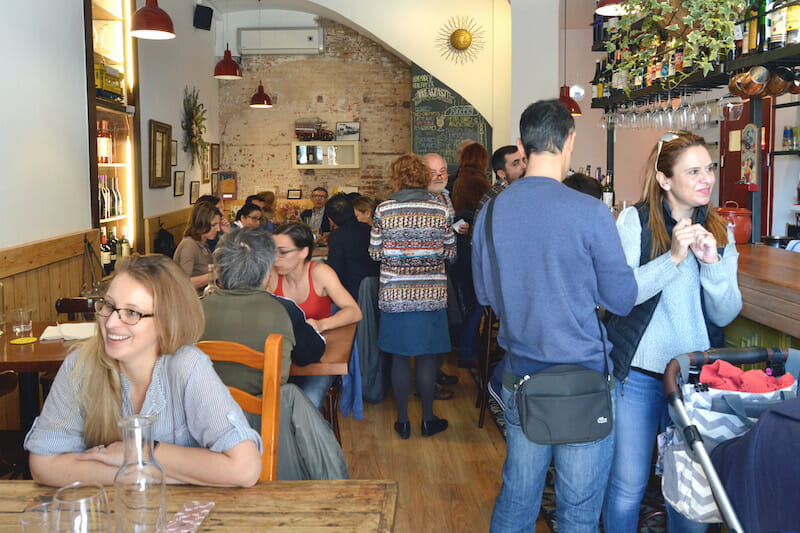 Roser, who is Catalan, and Fabio, who is originally from Italy, met on the Camino de Santiago, the Spanish pilgrimage route also known as St. James’s Way, in 2015. As Roser remembers it, she was practicing yoga in an idyllic grass field and Fabio was trying to imitate her impossible poses. At the time, Roser was working in Barcelona as a well-established natural therapist and chiropractor, and Fabio, having earned a reputation as a great chef, was working at Trussardi, a Michelin-starred restaurant in Milan. But they were both looking for something new. The El Camino changed their lives, as it has for innumerable people the world over, by bringing the couple together.

Agreste de Fabio & Roser is a restaurant, but Roser and Fabio want it to be much more: the couple have built a rooftop garden, which provides produce for the kitchen, and there are plans to create a forest full of edible plants nearby and to build additional rooms for dance and Pilates classes or even, one day down the road, a health-focused B&B. As part of their philosophy, they try to act sustainably as much as possible, like offering filtered tap water, using compostable tablecloths, cultivating a permaculture garden, building a wine list that includes a wide range of natural, organic or biodynamic wines from local producers and using organic and wild products in their dishes. 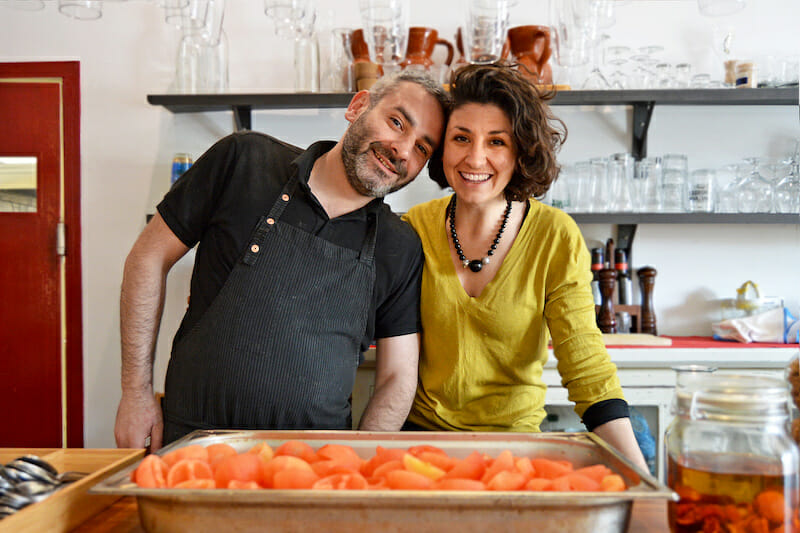 The menu reflects Fabio’s respect for ingredients. He spent his childhood in his parents’ bakery in Seregno, a village near Milan, Italy, where he became fascinated by the cooking process. At 16 years old, he started washing dishes in restaurants and later worked his way up, studying professionally and working in several renowned kitchens inside and outside Europe before becoming the sous chef at Trussardi. But despite all these varied influences, “he always had a very personal style, respecting the pure identity of the product,” says Roser.

While there were many appealing options on the menu, making it difficult to choose, we settled on some seasonal calçots, a special Catalan spring onion, as a first course. The dish was a splendid reconceptualization of the traditional method of preparing calçots, which involves grilling them over an open grill until they become completely black on the outside. Fabio cooks the perfectly tender, juicy calçots at a low temperature and evokes the “grill flavor” with some smoked herring eggs and activated charcoal, which coats the white surface of the spring onions, giving them that charred look. The dish is completed with a delicate ajoblanco (which translates literally as “white garlic”) cream, a riff on the popular cold soup of the same name typical to Andalusia and a substitution for romesco, a special dipping sauce made from dried red peppers, nuts (usually hazelnuts and almonds), garlic, vinegar and olive oil that usually accompanies calçots. Fabio’s version is made with garlic, almonds and hard bread, and decorated with alliaria, edible fresh flowers that Roser picks in the forest behind the restaurant. All of these components are crowned with the long, thin roots of the calçots, which are delicately fried. It’s an amazing reconfiguration of the traditional flavors of onion, smoke, almonds and garlic.

Agreste de Fabio & Roser is a restaurant, but its namesakes Roser and Fabio want it to be much more.

Another excellent vegetarian first course was the baked butternut squash, which was presented in two chunks covered with a fermented sauce made of black garlic, soy sauce and pure cocoa that really drew out the squash flavor. On the side, a tasty Parmesan melted cream and a few juicy slices of bittersweet onion, with some curried and fried breadcrumbs and pumpkin seeds sprinkled on top, contrasted nicely with the squash.

When it came to the mains, we tried one fish dish and one meat dish. For the former we ordered tuna parpatana (a cut of tuna located behind the head), which was supremely tender and buttery – it’s always a magnificent dish, and Fabio’s version respected its essence. It was served with tupinambo (Jerusalem artichokes) prepared two ways – cream and crispy chips, a nice contrast of textures – baked scallions and sea lettuce for a hit of sea flavor. 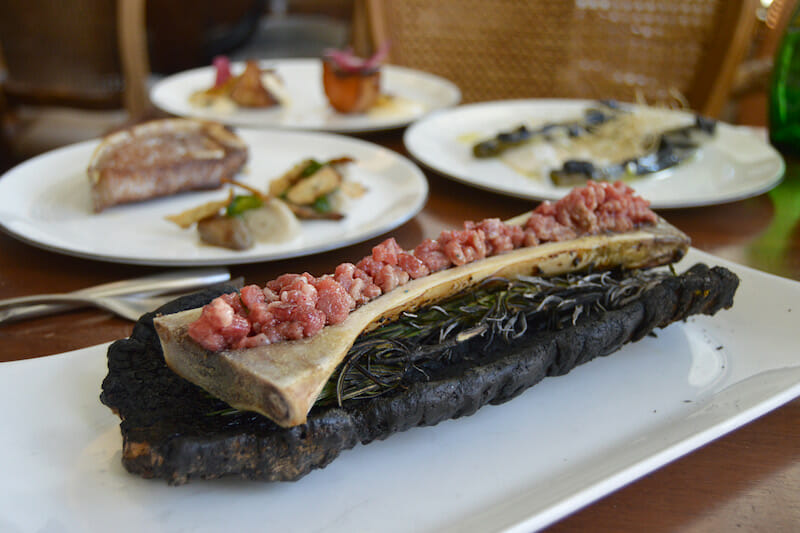 As much as we loved the tuna, the meat main was truly spectacular, equal parts feral and elegant: beef marrow served inside the bone and covered with raw mince made from an organic T-bone steak. The bone sat on top of a piece of scorched cork and burning rosemary leaves, the heat from which slowly cooked the raw meat. The scent of the burning aromatic plant only increased our appetite and added to the experience as we delicately scooped out the meat and marrow with a small spoon.

For the perfect ending, we ordered a pure cocoa and paprika “ice cream.” Made with water instead of cream or milk, it was very light and barely even sweet, with the spicy paprika enhancing the pure cocoa flavor.

After the meal, we made our way down the hill back to the city, feeling certain that Agreste de Fabio & Roser will continue to grow like a weed and be even bigger and stronger on our next visit. 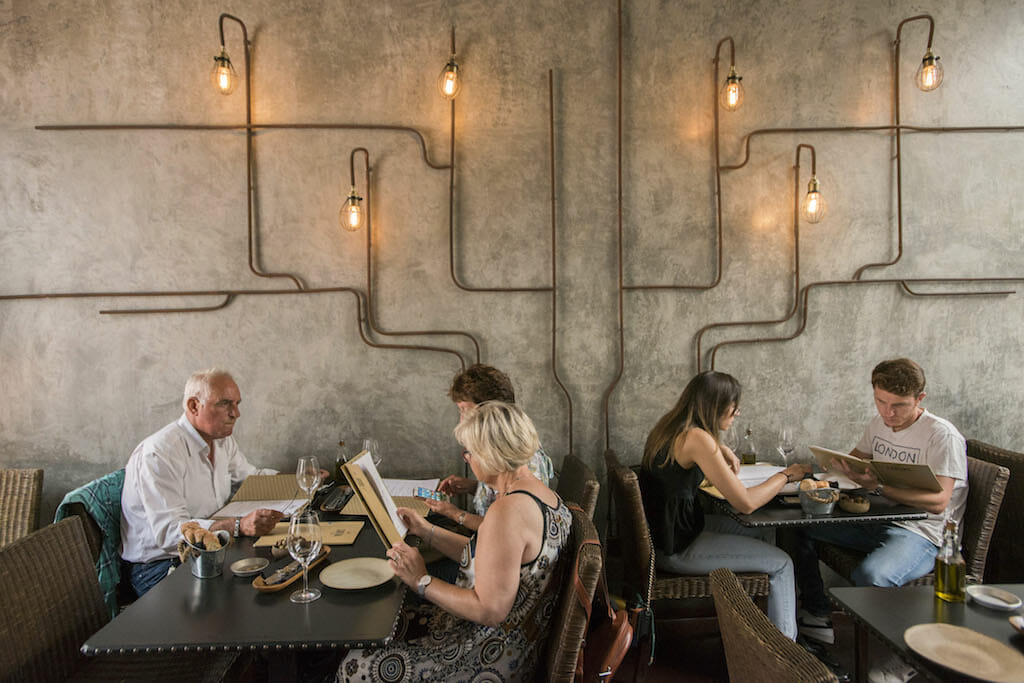 Porto | By Cláudia Brandão
By Cláudia Brandão
PortoThe restaurant that Inês Mendonça dreamed of can only be described using the Portuguese expression levantar as pedras da calçada – literally, to raise the stones from the sidewalk” –to create something totally new and groundbreaking. When Porto’s now-popular Ruas das Flores was being restored, the din of construction clanging as workers labored to turn… 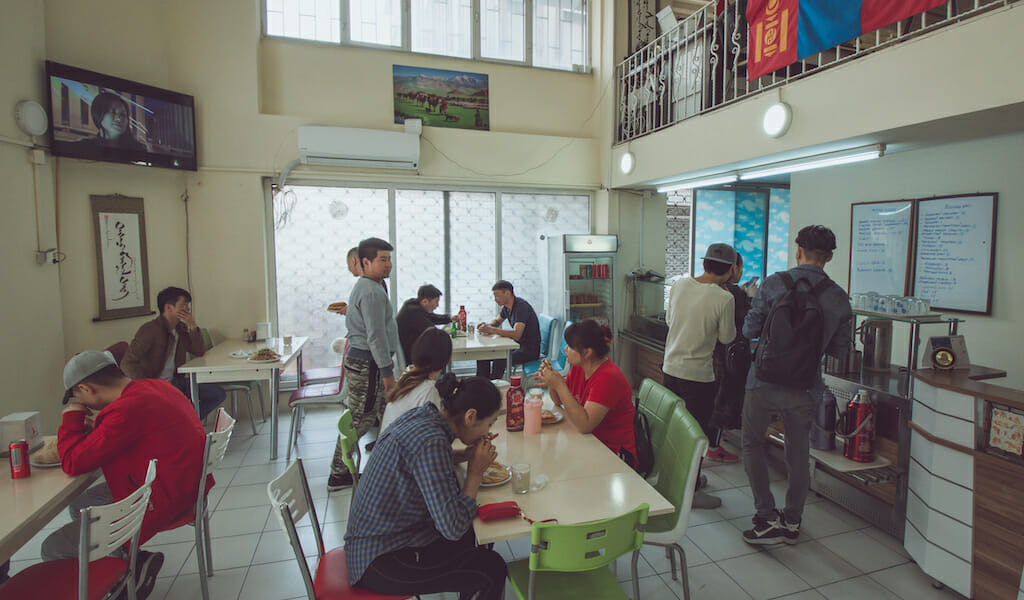 Istanbul | By Geoffrey Ballinger
By Geoffrey Ballinger
IstanbulHidden in the small, nondescript streets of the Kuştepe neighborhood, just beyond the bustle of the Mecidiyeköy metrobus stop and pamphlet-pushing youths desperate to sell you English lessons, sits Дээж or “Deej,” one of the few Mongolian restaurants in Istanbul. We first spotted it from the window of a moving bus while on another residence…