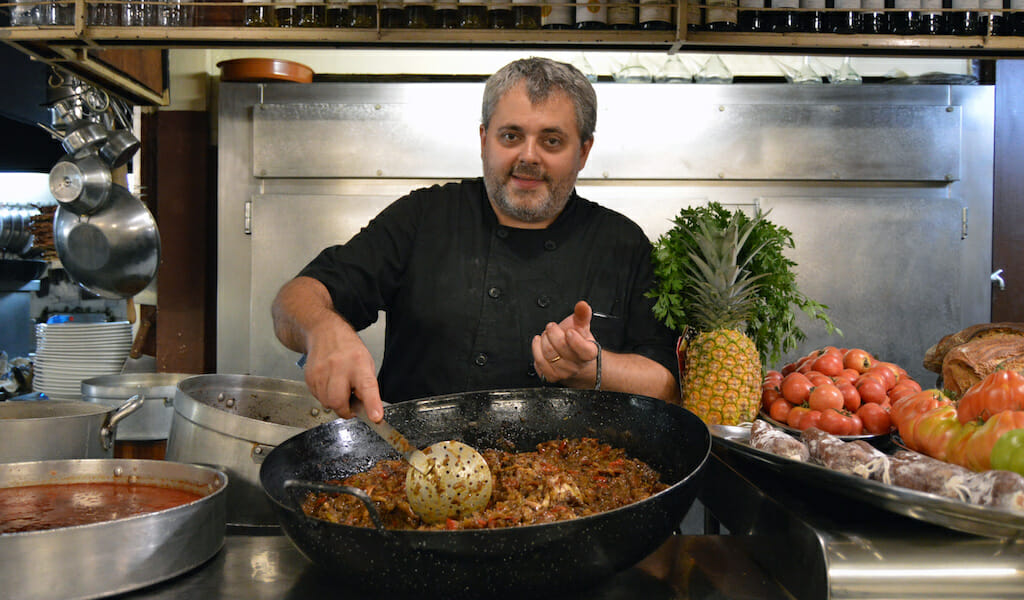 La Perla BCN: Back to the Future

“The future is the past,” says Salva Serra, quoting winemaker Pepe Raventós, the latest in a long line of winemakers to run the famed Raventós i Blanc. While his lineage might not be quite as storied, Salva knows a thing or two about preserving the past – the Serra family has owned La Perla BCN, a restaurant located in the upper Poble Sec neighborhood, very close to Montjuïc Park, since 1965. It’s the type of old traditional restaurant that you only learn about from word of mouth – a friend who only went there because another friend told him about it.

The wonderful area where La Perla BCN is situated, with the Poble Sec residential neighborhood on one side and the nearby gardens of Montjuïc hill, home to museums and theaters, including the Grec Theater (built for the Universal Exhibition of 1920), on the other, was not always so charming. In the late 60s, the area was packed with the shanties of poor immigrants who came from different spots in Spain to work in the flourishing industry of Barcelona.

Everything changed very quickly over the next decade or so, as the Franco dictatorship ended and the modernization process began – the shacks started to disappear and the area began to transform, offering new opportunities for people of all backgrounds. In addition to the usual neighborhood clientele, there were now some artists who were working in the nearby theater as well as football players. These new residents often came looking for more expensive and exclusive ingredients. 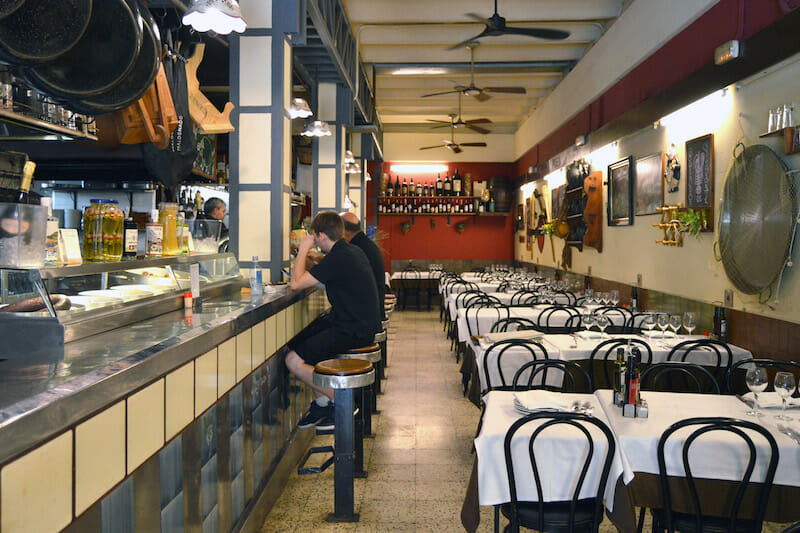 At that point in time, the restaurant was part of a local chain of bodegas called La Perla del Priorat that used to sell wine in bulk. Yet Ramón Serra, Salva’s father, saw the new direction the neighborhood was going in and decided to change things up by offering food in addition to wine.

Nowadays, the current clientele is still the same combination of profiles, from neighbors and artists on a budget to business people and serious lovers of traditional cuisine, including other chefs, who are ready to spend more money for exceptional house-made specialties and products. As Salva says, “Our clients are friends that come with their friends and fill the tables.”

Nowadays Salva works here with his father, Ramón, who has been the main driving force of the restaurant from the start, and with his brother Salvador and their respective wives, Dolores and Carmen. It’s a family-run business where everyone is so close that even the waiters became family over the years.

“Our clients are friends that come with their friends and fill the tables.”

Over the years the bodega morphed into a tapas bar and later a tavern-restaurant that now, in words of Salva, “is a neighborhood tasca with ‘tire star’ products,” a jokey reference to the Michelin stars. To get these exceptional ingredients, they work with suppliers from different markets all over the city and will even travel to the very edge of the Barcelona municipal area to find their favorite products, which include the first-rate Maldonado brand of jamón ibérico de bellota (made from pigs raised on acorns) and Raventós i Blanc wines (although they are by no means the only wines on offer).

Their cooking style follows ancient techniques: everything is done by hand and there are very few machines in the kitchen. Rather than offer certain specials on certain days of the week, they instead craft a new seasonal menu each day based on what’s available in the markets. 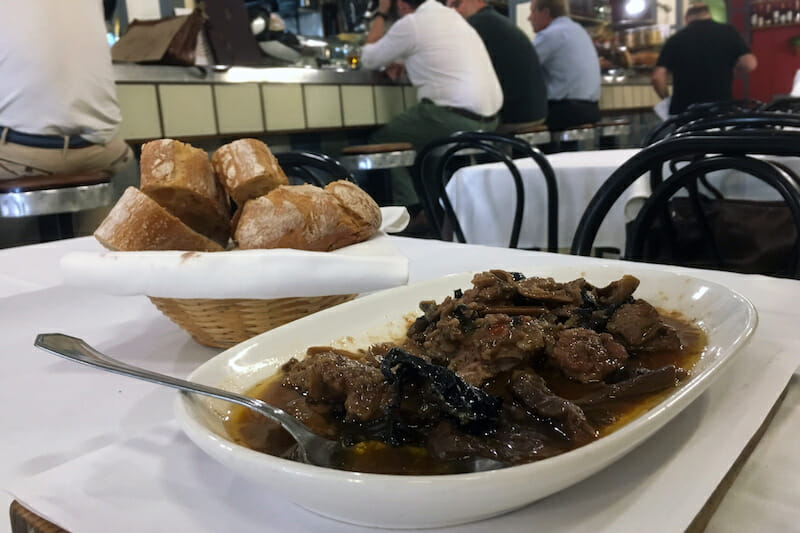 Customers and friends come to eat traditional Catalan and Spanish dishes made from scratch, many of which are now at risk of disappearing – they still grace the menus of older restaurants, but not so much at the new spots with more eclectic and globalized personalities. Dishes like the succulent, rich and powerful cap i pota (beef head and leg stew), fricandó (thin beef filets with Saint George mushrooms, very different to the French-Occitan fricandeau) or peus de porc (pig’s trotters).

One of our favorites is their amazing cannelloni, a dish with Italian roots. In the 19th century, wealthy Barcelona families were in the habit of hiring Italian chefs for their homes, which is how this pasta dish came to Catalonia. Yet the local version was filled with roasted meat, the same meat used to stuff roasted peppers, as opposed to the classic cannelloni alla Bolognese, which is made with a meat sauce. La Perla BCN serves two versions (although both are not always available), the traditional Catalan dish and the foie gras cannelloni, one of the stars of the menu.

They also have a number of paellas, or rice dishes, available. Different from other restaurants, they prepare theirs with a sofrito and all the main ingredients instead of using fumet, or fish stock. The result is a juicier paella where the rice absorbs the flavors directly from the main ingredients used (chicken, seafood, mushrooms, etc.). The salted codfish dishes (another important tradition in countries with a Catholic background) are also excellent as they serve the morro, the best section close to the head. And the generous meatballs, made of beef and Iberian pork loin, egg, bread in milk, garlic and parsley, pepper and salt, are prepared entirely from the scratch.

“A cuisine like this is special – it has your own DNA, your mark, your footprint,” explains Salva.

They’re open for breakfast, offering both excellent Iberian ham or artisan cheese sandwiches and proper Catalan “fork breakfasts” – you can even order a glass of wine if you want to make it more like a brunch. But the main meal, and the most glorious time to be here, is lunch. They are closed for dinner, all the more reason to hurry on over to enjoy La Perla BCN in all its traditional glory. 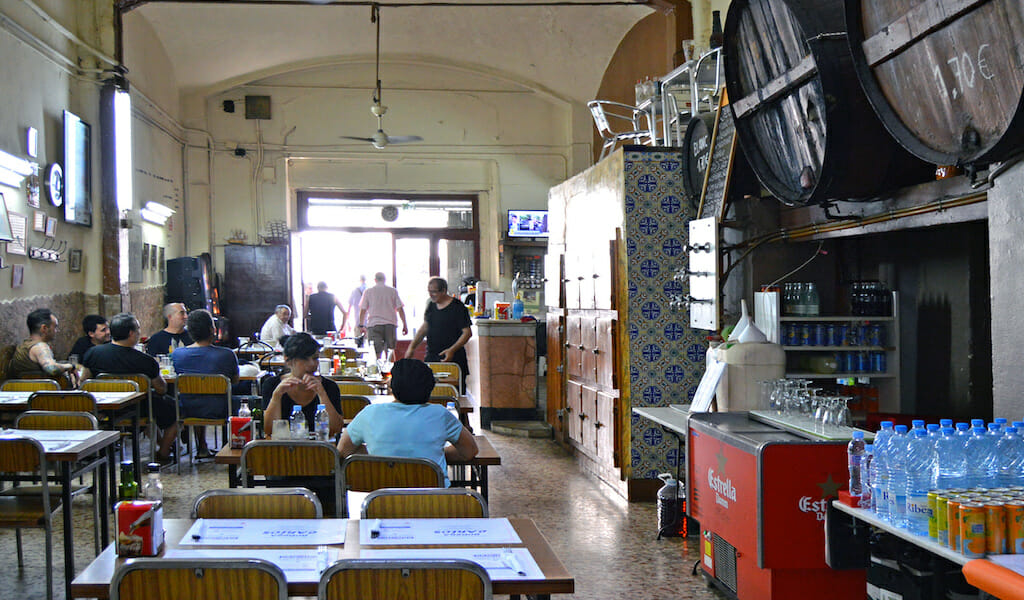