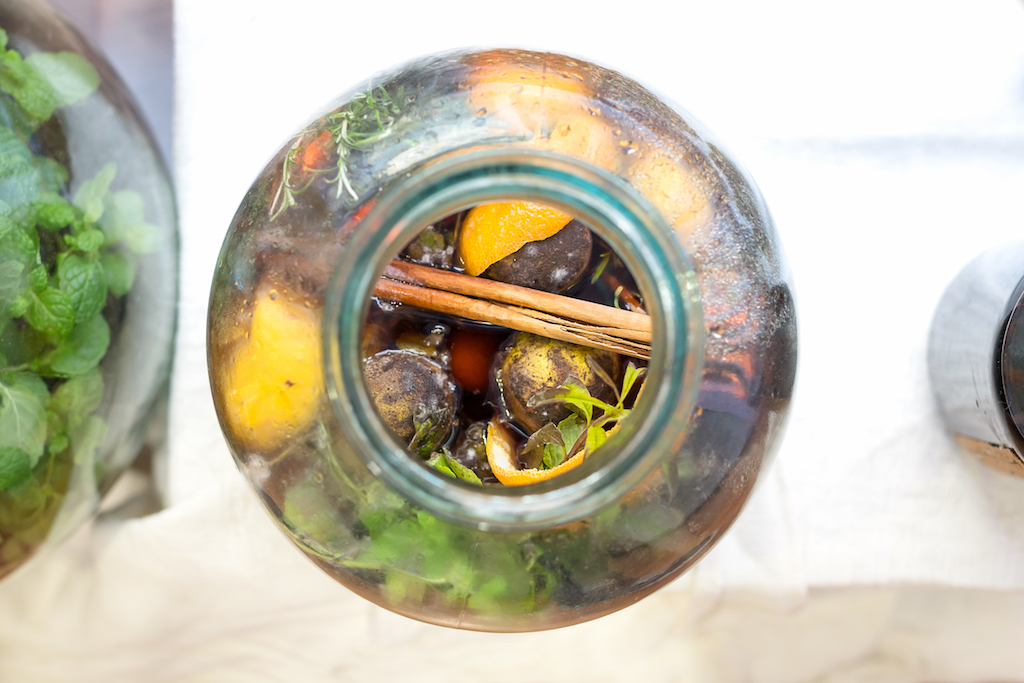 In the little town of Santa Coloma de Farners, within the Catalan province of Girona, locals have been making the herb-infused liqueur known as ratafia for centuries, with each family passing down their own version of this unique libation from one generation to the next.

In 1997, within the county’s official records, came a major food discovery – written recipes for three distinct styles of ratafia dating back to 1842, which are now recognized as the oldest of their kind in Catalonia. These handwritten lists of ingredients (along with other culinary notations, savory recipes and home remedies) were discovered in the old notebooks of Francesc Rosquellas, once the proprietor of a café/restaurant in Santa Coloma de Farners whose name had long since been forgotten.

Upon discovering these precious bits of gastronomic patrimony, the Ajuntament (City Hall) of Santa Coloma de Farners charged the local distiller Russet with the task of recreating these historic concoctions, beginning straight off in 1997 with the “Clàssica 1842.” Russet proceeded to release the “La Nou Verda” recipe in 2002 and the “Vuit Porrons” in 2014. Since 1997, the town of Santa Coloma de Farners – and the world of ratafia at large – has considered these three recipes its defining doctrine.

Naturally, it was with giddy excitement that a new, fourth Rosquellas recipe was discovered in 2015 within the same town records as before, a recipe with tart cherry as its base ingredient. In honor of this stirring addition to ratafia’s historical lineage, Russet now sells a four-bottle box set – an essential for the after-dinner arsenal of any ratafia aficionado.

You can drink all four versions of this dark and complex digestif at the 36th Fira de la Ratafia of Santa Coloma de Farners. The celebration (in the form of a ratafia-making competition) technically began in 1982, though the first two years of the celebration were actually bundled in with Santa Coloma de Farners’ Festa Major (the biggest annual town celebration, held each year on September 24). In 1984, ratafia finally earned its own moment in the sun, and the festival moved to the second weekend of November each year. 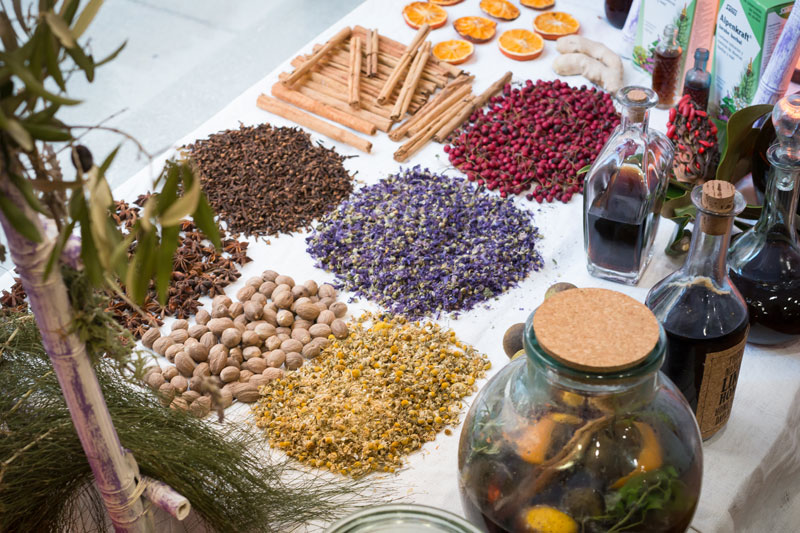 The process of making ratafia is tied tightly to the seasons. In mid-June, as the wild herbs in the surrounding countryside reach their full, aromatic glory, local vendors pluck them from field and farm and sell them in fragrant bundles in the streets of Santa Coloma de Farners. Bulbous glass flasks are filled with potent aguardent on terraces throughout town, in preparation for Saint John’s Eve (La Vispera de Sant Joan), perhaps better known as the Summer Solstice. On this “magical” night, fists full of green walnuts (nou verda), spices, herbs and much more are added to 120-proof neutral grape brandy and set to macerate.

“Without the nou verda you can’t call it ratafia,” explains Mireia Vial as she passes around a wooden box full of little plastic bags packed with the four dozen or so most typical ratafia ingredients used in Santa Coloma de Farners. Vial is an Official Guide of Catalunya and grew up not far from Santa Coloma de Farners in the Gironese region of La Empordà. The box she passed to us is emblazoned with the logo of the Confraria de la Ratafia – the Ratafia Brotherhood.

The Confraria is the official governing force in Santa Coloma de Farners when it comes to ratafia and their symbol is a half moon and half sun, representing sol i serena – an essential part of the ratafia-making process that refers to the period in which sun and shade fall over the glass flasks in which ratafia is aged as they sit on local outdoor terraces throughout July and August. Though this tradition and technique is mostly learned from within one’s family, the town hall and the Confraria organize public workshops throughout the year to guide novices through each step of the process.

When making ratafia, the first (and most important) elements to add are green walnuts, followed by the other botanicals of your choosing. Once mixed, the concoction is left at the mercy of the elements, infusing, oxidizing and intensifying in flavor for 40 days. “In Santa Coloma de Farners, we swirl the liquid in the flask periodically while it macerates,” explains Mireia. “This is a unique practice that gives the ratafia a more intense flavor.”

After the first 40 days, the liquid is filtered into smaller glass bottles (or oak barrels in some cases) and aged further, allowing the powerful punch of the alcohol itself to mellow out as the delicate, intricate, herbal matrices of the liqueur shine through. After another few months of anxious waiting, the ratafia is filtered again and is finally ready to drink at the beginning of November, a boozy catharsis that coincides each year with the Fira de la Ratafia. 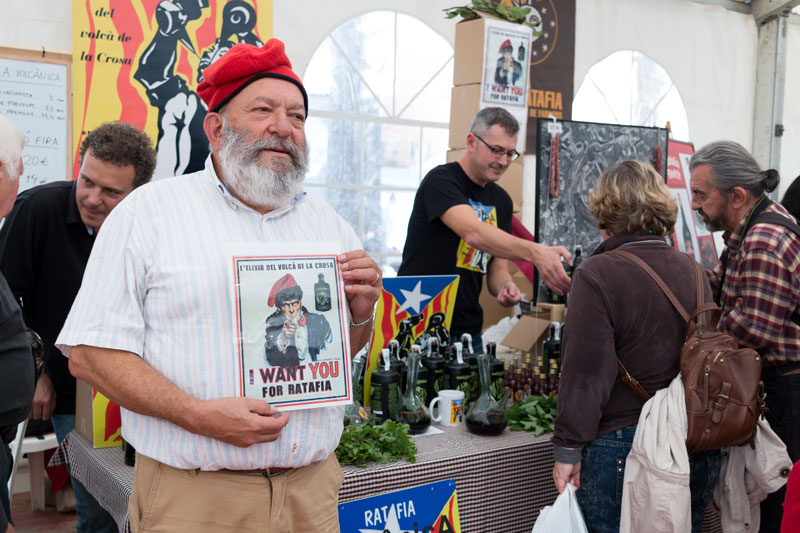 The Ratafia Festival is much more than just a showcase of local producers and ratafia-laced treats (which run the gamut from pastries and sausages to teas and ice creams). Throughout the four main days of the festival, and for some days before as well, a multitude of events and activities are offered to the public, including distillation demos, ratafia-making workshops, guided tastings, cooking classes, live musical concerts, historic walking tours and photography lectures.

One of the biggest events of the week is the Ratafia making competition, dating all the way back to 1982 and still going strong. Judges evaluate each homemade infusion for color, aroma and flavor. The winner’s name is immortalized on the “Olympus of Ratafia” – a trophy displayed in the upstairs hall of local establishment Can Trias and the principal exhibit of “L’Univers de la Ratafia.” Consisting of an itinerary of emblematic places in Santa Coloma de Farners related to the world of ratafia, “The Universe of Ratafia” begins at Can Trias, where there is a wealth of information on display. In addition, plaques and QR codes at points of interest throughout the town offer visitors the full ratafia story in a very visual, interactive way.

Keeping in the spirit of the festivities, during the Fira de la Ratafia, nearly all of the restaurants in Santa Coloma de Farners offer a special “Ratafia Menu.” The beauty of using ratafia in the kitchen is that this herbal liqueur is equally adaptable to sweet and savory dishes. As every ratafia is different, one must analyze each mixture’s predominant notes and use them as a guideline in the pairing, as is done with expert precision at legendary pastry shop Casa Tuyarro. 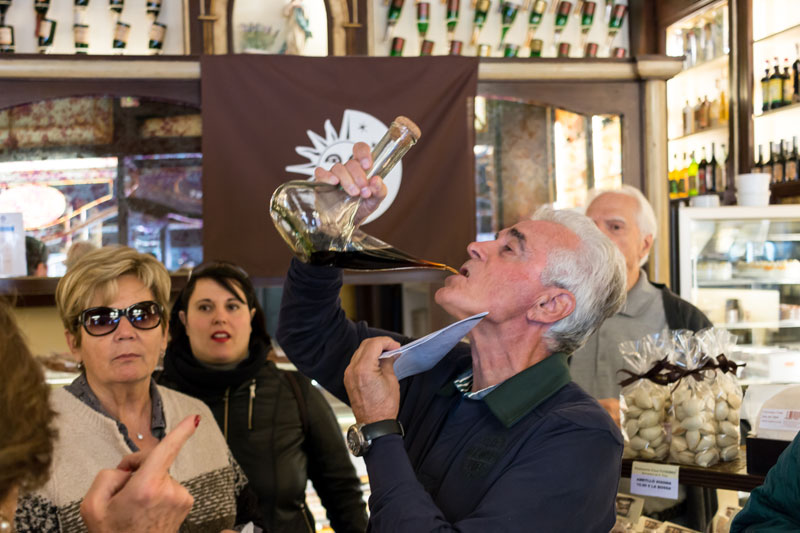 Pastisseria Casa Tuyarro was founded in 1894 and sits just off of the Plaça de Farners. Besides being one of the oldest and most beautiful “early modernist” shops in town, offering a vast array of ratafia brands and ratafia-infused pastries, Casa Tuyarro also makes its own ratafia, which is known for an unmistakable, predominant flavor: cumin. Though a bit odd, the combination of sweet alcohol and pungent cumin seeds, poured in long streams from classic Catalan porrons, is actually quite enjoyable. The classic pastisseria’s ratafia confections are equally tasty. Each cake and cookie bursts with sweet, herbal goodness, including the tortell de ratafia, a round, walnut-studded cake that is the house specialty.

When passing the day in Santa Coloma de Farners during the Fira de la Ratafia, it is easy to get carried away with the free samples and find yourself in a half-drunken state, with a sugar-infused hangover looming on the horizon. Our recommendation is to take it slow and fortify yourself with a hearty menu de ratafia at the restaurant Vent d’Aram, located in a lovely modernist building just one block from Casa Tuyarro. After a leisurely meal, another stroll around the small town center, taking in the sights, sounds and smells of Santa Coloma de Farners in its moment of festive glory, is definitely in order.

Editor’s Note: The 36th Ratafia Festival in Santa Coloma de Farners will be held on November 9-12, so we thought it was worthwhile to rerun this 2015 piece. Visit the event website for more information.

Barcelona | By Sam Zucker
By Sam Zucker
Barcelona2015 has been a banner year for the herb-infused liqueur known as ratafia. In the little town of Santa Coloma de Farners, within the Catalan province of Girona, locals have been making this unique libation for centuries, with each family passing down their own version of the drink from one generation to the next. In… 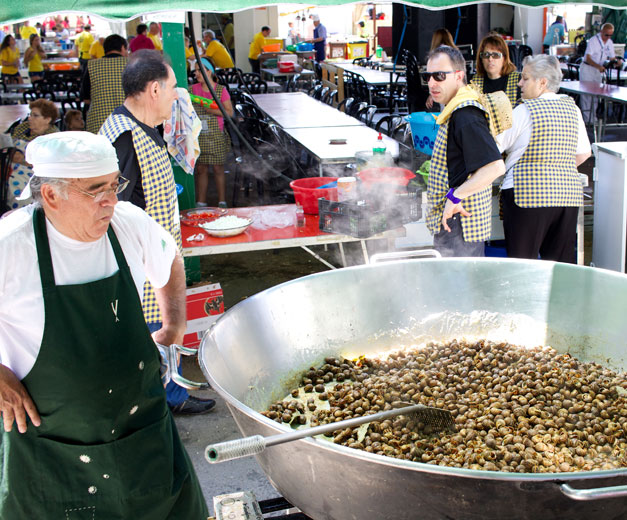 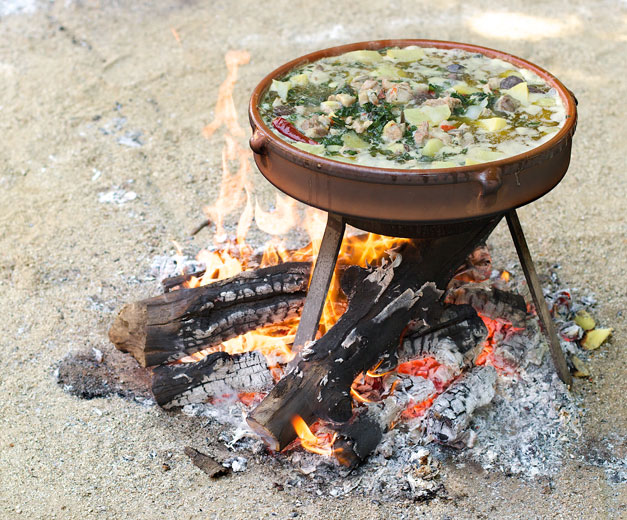