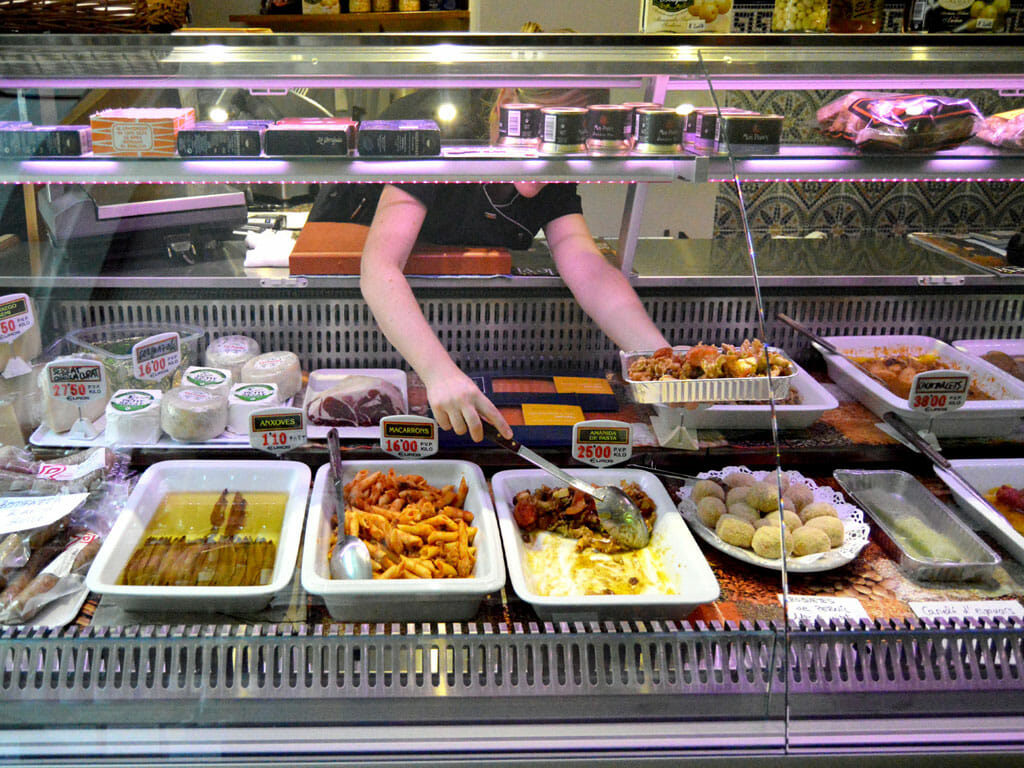 By Mireia Font and Sam Zucker

Barcelona continued to thrill this year with its seemingly never-ending possibilities for great eating, from ambitious family-run eateries to neighborhood restaurants steeped in Catalan traditions to world-renowned temples of gastronomy.

With its great gastronomic aspirations and a solid foundation in farm-to-table cooking and traditional Catalan recipes, this small Zona Franca granja (literally “farm”), which was been passed down through three generations, has gone from a simple shop serving breakfast and snacks to a full-blown restaurant and total culinary wonder. 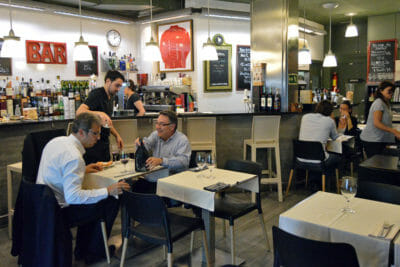 Run by the Sierra-Calvo family since 1974, Granja Elena is now helmed by the third generation, who are all industry professionals: Borja runs the kitchen, Patricia the wines and Guillermo the dining room. The menu changes a little every day according to the seasons, and the kitchen team’s creativity is driven by what’s available in the markets and by its relationships with its excellent, longtime purveyors. It’s a familiar formula throughout much of the city, but the real challenge is in the execution, and Granja Elena does it better than most. Here, we love the old-school cap i pota, a stew of beef head and leg, as well as the sophisticated tuna galete with piquillo peppers and clams with artichokes.

Granja Elena is part of a wave of small restaurants and bars that are democratizing haute cuisine, a trend I can’t wait to follow into 2017.

Guinardó comprises a takeaway shop, gourmet foods and wine (more than 200 kinds) shop and a very small – just eight tables upstairs – restaurant. In the kitchen is chef Santi Velasco, and his wife and their daughter, Montse Velasco, a highly regarded sommelier, help run the business.

The menu is anchored by some perennially available dishes and rounded out with seasonal ones. All the takeaway options are available to taste at the tables, but the dining room has its own menu, all of which is meant to be paired with the excellent wines.

Many customers come just for the superb callos (tripe stew). Others come for the pig’s feet with chickpeas, which has a bit of shredded black butifarra (a Catalan sausage) in it and is cooked until the meat falls off the bones. The slow-cooked oxtail with red wine and chocolate and the monkfish with prawns, enhanced by a seafood fumet (suquet in Catalan) made with rockfish, crab and mantis shrimp, are both standouts. I also love the delicious simplicity of the fesolets d’ull negre, a kind of black-eyed pea with caramelized onions and cured anchovies.

I don’t want to end the year without remembering the shops that had to close or move after the end of the LAU (Ley de Arrendamientos Urbanos, or Urban Tenancy Law) extension, which protected old businesses from rent increases.

One of the survivors is Bombonería Fargas, which had to leave an amazing original Art Nouveau space built in 1827 – because the building owners and investors wanted a department store there instead – but is able to continue offering its chocolates to lifelong customers in a new location close by. The workshop and retail store had to be split up into different locations, and the new storefront is like a modern tribute to the old one, with some of the original furniture and objects. More importantly, Fargas has kept the intoxicating chocolate fragrance that greets you at the door and the artisanal products it has always had on its shelves.

Back in the day, the cacao was ground on the premises in a stone mill turned by a mule to make chocolate a la piedra (xocolata a la pedra in Catalan). The shop also used to offer services for preparing hot chocolate in customers’ homes, adding sugar and spices according to their tastes. These practices are no more, but in the workshop, Fargas’s artisans continue to grind the cacao and turn it into a wide-ranging assortment of wonderful chocolates.

A remarkable dining scene is brewing up in the most peripheral parts of Barcelona as well as in the bedroom suburbs that border the city. Young talented chefs who cannot face the high rents of more central or trendy parts of the city have decided to open their business in neighborhoods far from what travel guides usually cover and very far from what Barcelonans consider fashionable areas. Some local food critics have called this new wave of restaurants nueva cocina de barrio, New Neighborhood Cuisine.

Mitja Galta, in Santa Eulàlia (one of the city’s southernmost neighborhoods, adjacent to L’Hospitalet de Llobregat), is probably one of the best examples of this emerging trend. With both feet planted firmly in traditional Spanish market cuisine and both hands on prime seasonal ingredients, this little barrio gem also gives a light-hearted wink to other cuisines (Latin American, Japanese, Creole, French and Italian) with humbleness, playfulness and respect. 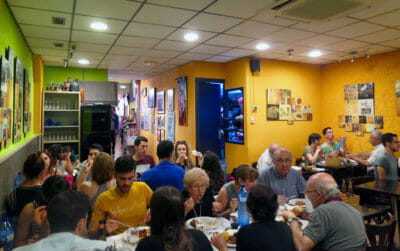 Not that far from Mitja Galta is another outstanding restaurant that is very much grounded in traditional Catalan cuisine. Terra d’Escudella’s menu is as appealing as Mitja Galta’s but more orthodox and old school.

The kitchen could be easily mistaken for a university department of Catalan Food Studies as it almost feels like the cooks are engaging in historical and gastronomical research. They cook popular comfort food with local and fresh ingredients for a crowd of loyal customers who crave dishes that even their great-grandmothers would consider old school: escudella (a long-simmered, meaty broth with vegetables, meatballs and bones), artichokes with peas, pork feet with almonds, baked beef cheeks, meatballs with cuttlefish and cod fritters, to name a few.

All drinks here are 100 percent Catalan: from wines to craft beers to soft drinks, from whisky to gin. It’s in the desserts where the cooks loosen up a bit and unleash their creativity, with masterpieces like the crema catalana foam.

In a tall and narrow 16th-century building on the principal streets of Barcelona’s prim and proper neighborhood of Sarrià, El Canalla’s kitchen is warmed and aromatized by a gleaming Josper oven; a cross between a traditional oven and a charcoal grill. Prime ingredients from both land and sea are seared to perfection and flavored with a hint of smoke. Tender young sardines, whole artichokes and pig’s feet are all fair game, but it was the Pluma Ibérica with glazed shallots and roasted potato purée that stole the show. An incredibly tender and under-utilized cut of pork from the pig’s forward loin, when grilled in the hot and smokey Josper over hardwood coals, well…it may just be the most succulent piece of grilled pork I have ever tasted.

Recently awarded its first Michelin star, Disfrutar is increasingly difficult to get into, but I lucked into a lunch reservation there. I was seated at the bar near the entrance of the restaurant, which is neither as grand nor as airy as the main dining room but perhaps even more interesting, as it provided front row seats to the action in the pastry kitchen, where I watched the chefs prepare all of Disfrutar’s intricate and playful desserts.

The meal was one for the history books. From gelatin pasta with “carbonara” foam and beetroot puffs with sesame seeds to Moroccan-style pigeon with almonds and edible cotton balls, this lunch was one in which nothing was what it seemed. The wine pairings were quite eccentric too, with tangy and funky whites and cider playing a larger role than a more predictable parade of Spanish reds. 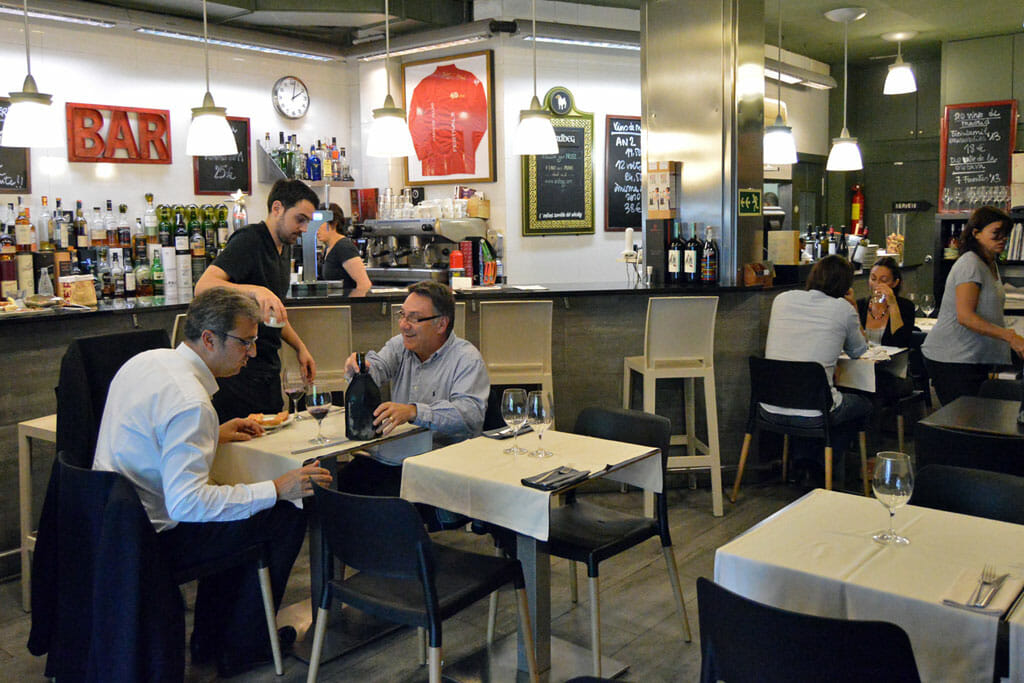 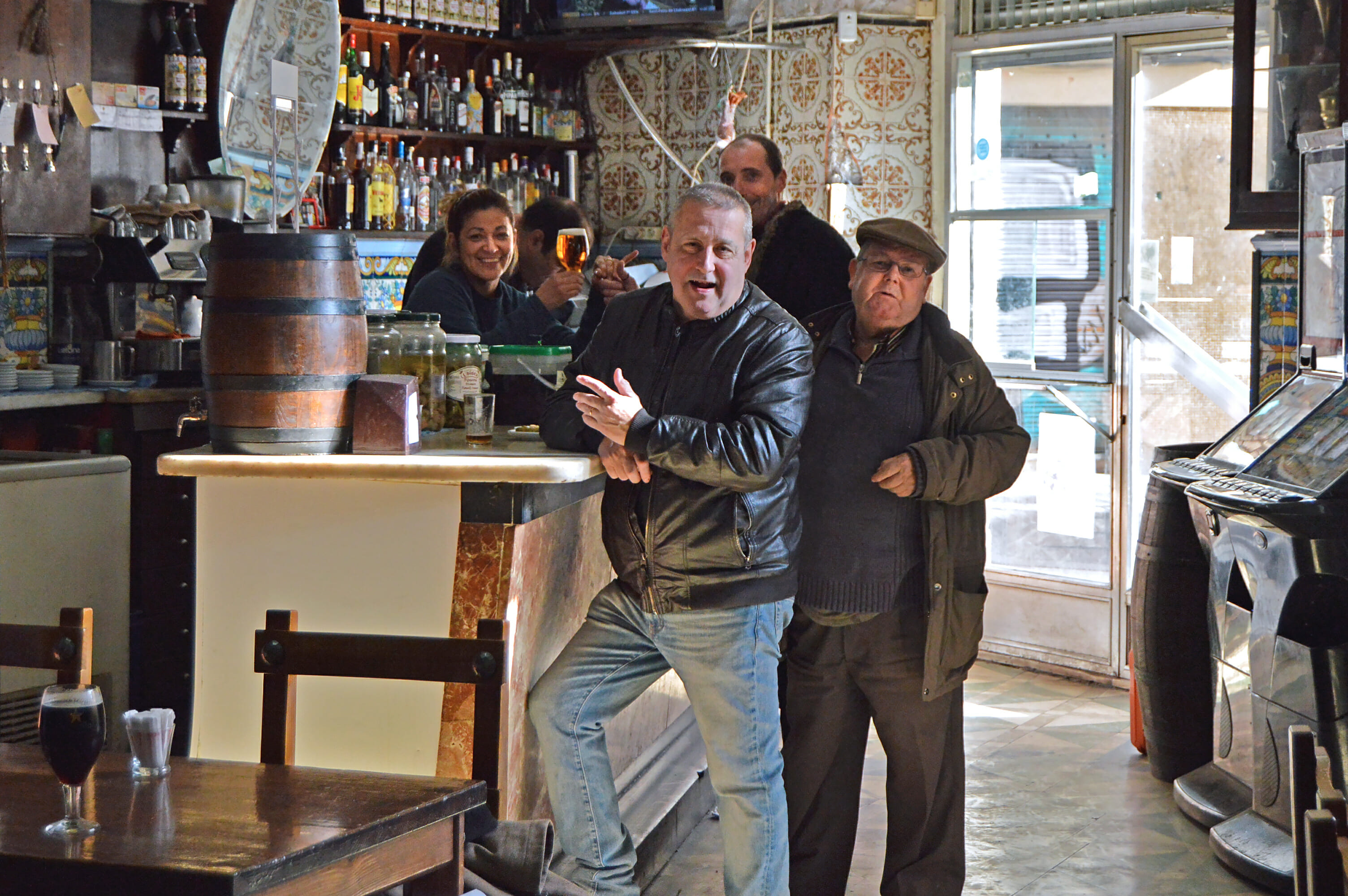 Barcelona | By Madeleine Roberts
By Madeleine Roberts
BarcelonaQuick bite: Spend the day eating your way through Sants, a lesser-explored neighborhood with a booming local food scene and a fascinating history. We’ll dig into markets and old vermuterias, pastry shops and down home restaurants, but we’ll also find the pulse of Sants in some contemporary culinary projects. Most locals know the Sants area…

Barcelona | By Paula Mourenza
By Paula Mourenza
BarcelonaBarcelona’s food shops and colmados offer culinary treasures all year long, but the holidays are a particularly exciting time for browsing their wares. The festive window displays show magnificent gift baskets overflowing with tasty treats – with many Spanish and Catalan specialties among them. Perhaps the most desirable items in holiday gift baskets here are…
Best Bites of 2016 in Barcelona