Opened in 1944, La Cova Fumada (“The Smoked Cave”) is one of the most beloved gastronomic icons in Barcelona’s port area. Every day, people from all over the city come here to enjoy the powerful charms of the smell of fried fish, the spicy bite of their original “potato bombs” and the warmth of the familiar, old-school atmosphere. This is a place to take off your tie, eat with your fingers and put aside your smartphone, lest the screen get covered with grease from your fingers. 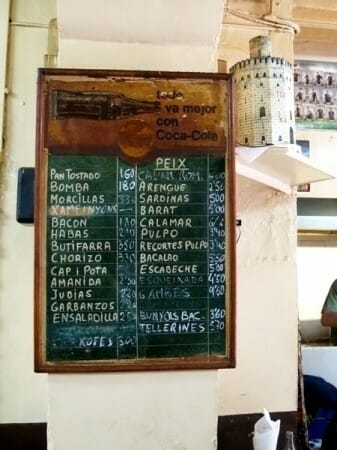 Inside the restaurant, the atmosphere has remained almost unchanged since the 1940s. In those difficult years just after the Spanish Civil War, the main customers at this typical bodega were people from the neighborhood and workers at shipyards in the port and the famous nearby “Maquinista” ironworking and machine factory, who came to have a glass of wine and to heat up their own food in the open “cheap kitchen.” The same spirit still pervades the tiny venue today, from the seven old, marble-topped tables and the same cramped open kitchen to the almost prehistoric blackboard – with the same menu, always written in chalk – and the wooden wine barrels connected to a couple of taps set into a marble panel, on which bar tabs are recorded in pencil. Everything here looks like a blast from the past. More than just an eatery, the place is truly part of the city’s ethnographic heritage. (Although La Cova is located in the market square of La Barceloneta and has two entrances, it is not so easy to find if you don’t know what you’re looking for. There are no signs over the doors, so you’ll have to look for the people waiting outside and follow your nose toward the aromas wafting out the window from the kitchen.)

But La Cova Fumada is also rightfully legendary for its food – in particular, for having introduced the potato bomb, said to have been invented in the 1950s by María Pla, grandmother of the current owners, brothers Josep María y Magí Sole. Her original version of this dish – which has since become one of Spain’s most famous and classic tapas – was a small ball made of mashed potatoes with some pork inside, rolled in breadcrumbs and egg, deep-fried in olive oil and, finally, served with either aioli (mayonnaise with garlic) or a spicier sauce made with cayenne peppers. 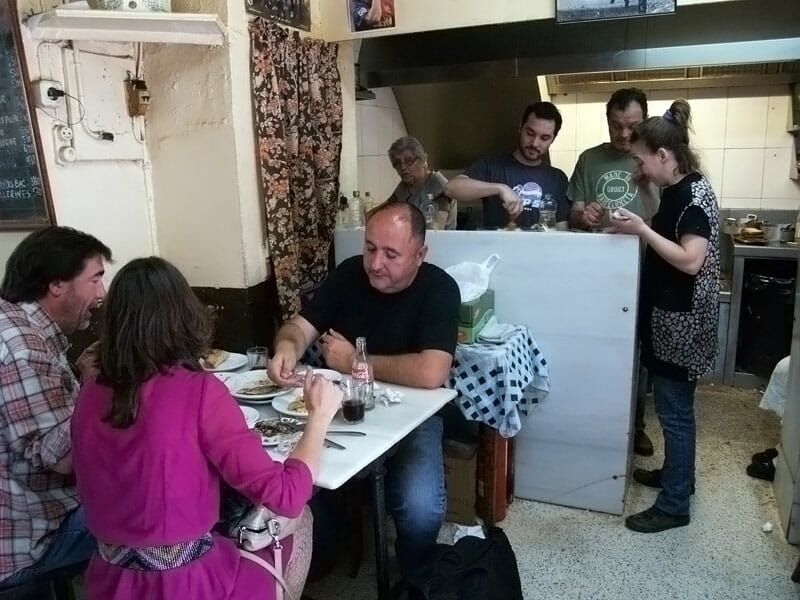 Beyond the renowned potato bombs, the menu on the blackboard is more or less a roster of classic tapas and small portions of fresh seafood grilled with garlic and parsley. Sardines, mackerel, prawns, squid and octopus are all served with a touch of olive oil and are best eaten with some pa amb tomàquet (bread rubbed with oil and tomato). Other excellent tapas include tender and very tasty fried artichokes, cooked chickpeas, stewed beans from Cartagena, butifarra negra (black Catalan sausage) and salt cod. Another very traditional dish is the cap i pota, a spicy Catalan stew made with the gelatinous parts of a pig’s head and feet (hence the name), also known in Spain as callos. The only change in the menu in the last 70 years is the introduction of seasonal seafood, such as fresh clams, razor clams or crawfish, which are steamed and prepared with just the freshness of the sea for flavoring.

La Cova Fumada is a place with what Spaniards call “solera,” having a sort of vintage character and maturity. And nobody in the Sola Pla family has any thought of changing this. “This is the charm of the place and the family atmosphere that we like to keep; it’s what people enjoy,” said Jose María. Sometimes, the old-fashioned touch creates the best fire with which to cook the food.

This review was originally published on June 17, 2013. 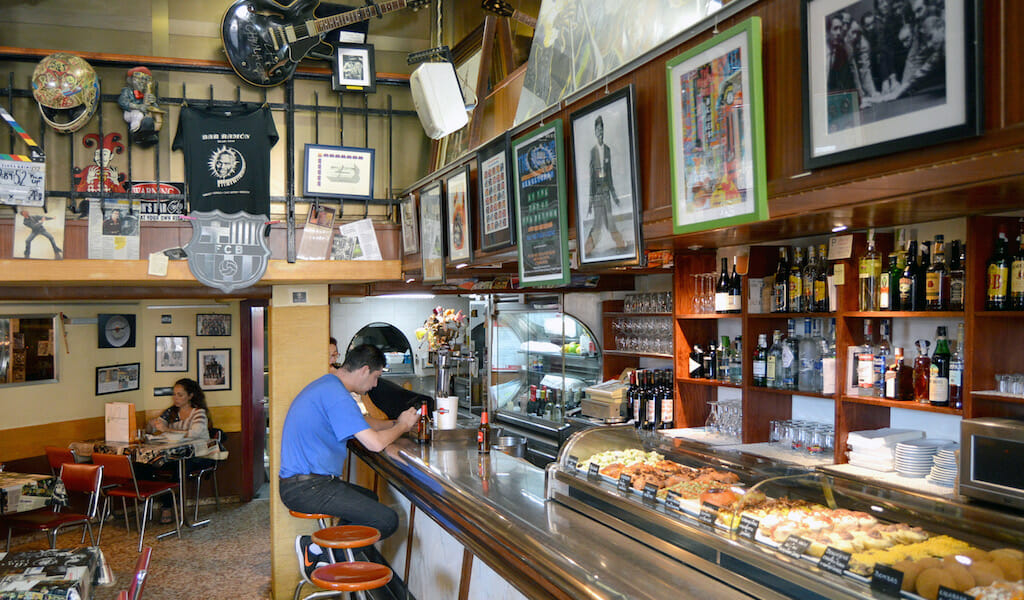 Barcelona | By Paula Mourenza
By Paula Mourenza
BarcelonaIt’s not too often that you find a restaurant in Barcelona where rock & roll, blues and jazz are some of the main ingredients. But that’s just the case at Bar Ramón, an iconic restaurant and tapas bar in Sant Antoni. Mediterranean grilled red prawns, patatas bravas, and xipirones (baby squids) a la Andaluza (coated…