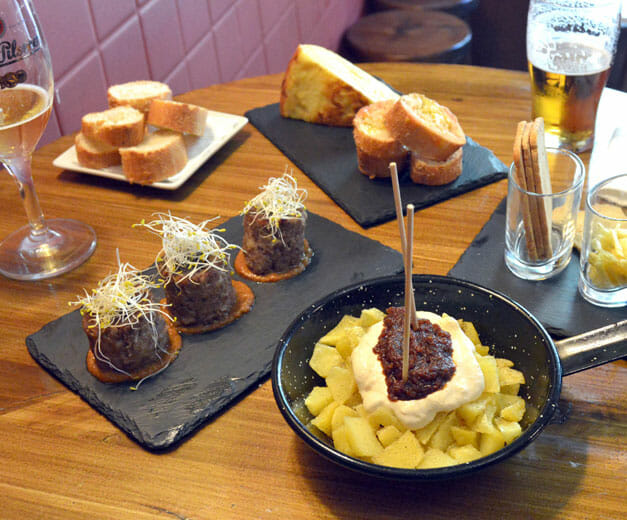 Ivan Rodríguez Vivancos is el tiet, Catalan for “the uncle,” a nickname given to him by the cooks who worked under him at renowned fine-dining restaurant La Terraza del Claris. Today, “El Tiet” is at the helm of his own restaurant, away from the stressful environment of alta cocina, in a place where he can also transport his customers away from the stress of daily urban living.

Vivancos opened El Tiet Taver Teca in 2013 in the area between La Dreta de l’Eixample and Gràcia. A taver-teca (a portmanteau of tavern and teca, an old word for “food” in Catalan) fills the traditional vessel of a bodega, or tavern, with the output of a small refined kitchen. It’s the kind of place where the classic mejillones en escabeche (the typical canned marinated mussels) are prepared with care from fresh shellfish and the Catalan vermut (bligatory to any new bodega or tapas joint in Barcelona) is homemade. Vivancos takes stellar ingredients and turns them into a lengthy menu of tapas and dishes – scrawled on the board – with a Catalan foundation and international flourishes. He also offers an ever-changing three-course menu del día (€10.75). 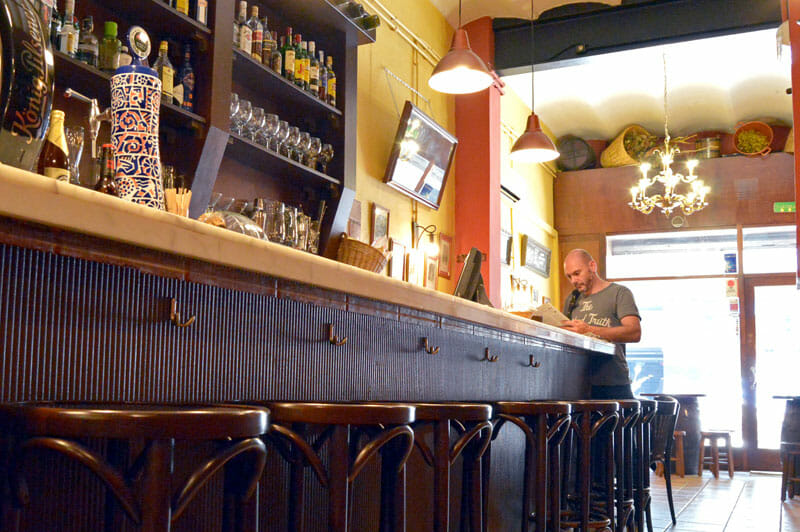 Vivancos’s right-hand woman is Beatriz Pardo, the sommelier and maître d’ – an uncommon position in most taverns. Pardo has assembled a list of mostly Spanish wines, many hard to find and, unusually, all of them available by the glass.

Among Vivancos’s best-known dishes are the “egg with Parmentier” (potato cream) with ham and truffle, served in a little pot, and the tasty patatas bravas with two secret sauces. We also love the steak tartare, made from Rubia Gallega beef (“Galician Blond,” a heritage breed) and accompanied by matchstick potatoes, and the salmon tartare, which combines cooked and raw fish.

Among Catalan classics, Vivancos enjoys cooking up trinxat (a hearty dish of cabbage, potato, bacon and butifarra) and cap i pota (pork head and leg) in winter, but since it’s summer right now, there are beefy meatballs served not in the traditional broth but atop pools of romesco, the red pepper and nut sauce, and stuffed with black butifarra and garnished with refreshing bean sprouts. For fans of seafood, the menu always offers a classic fish like fresh anchovies, but if Vivancos is cooking mussels or tellerinas, small Mediterranean clams, in a cataplana (the traditional Portuguese copper covered pan) as the shellfish daily special, that’s definitely the dish to get. 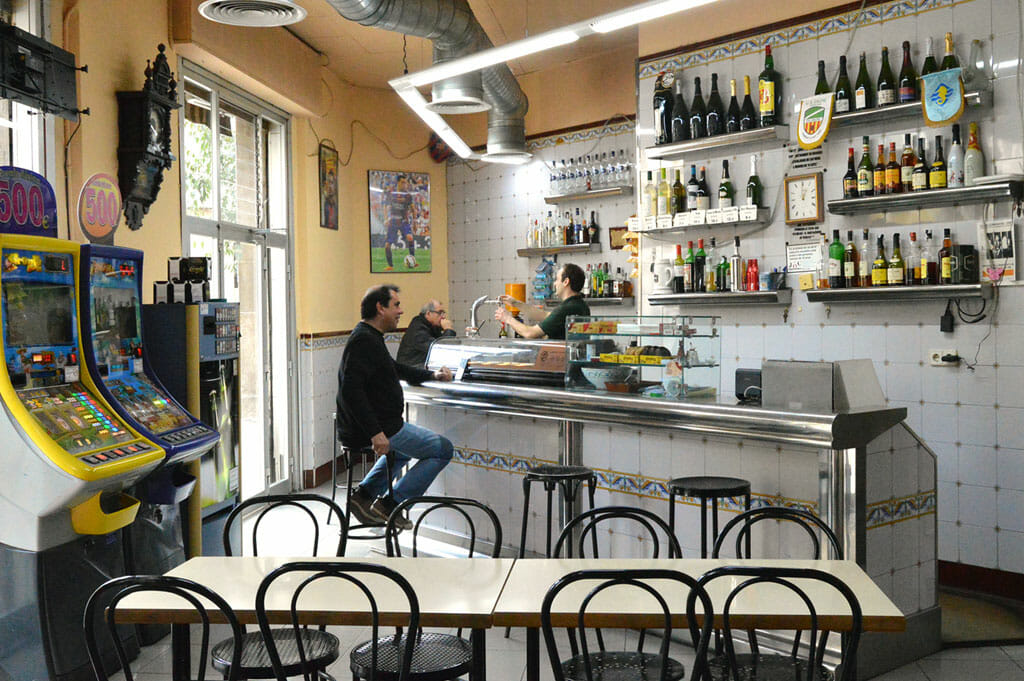 Barcelona | By Paula Mourenza
By Paula Mourenza
BarcelonaAt the beginning, Gelida was just a bodega where Joan Llopart Pujó, who came from the village of Gelida in Penedés, offered Catalan wine, cold cuts and a few traditional Catalan dishes cooked by his grandmother, like butifarra amb mongetas (boiled sausage with beans). Llopart Pujó and his wife worked here until they were in their… 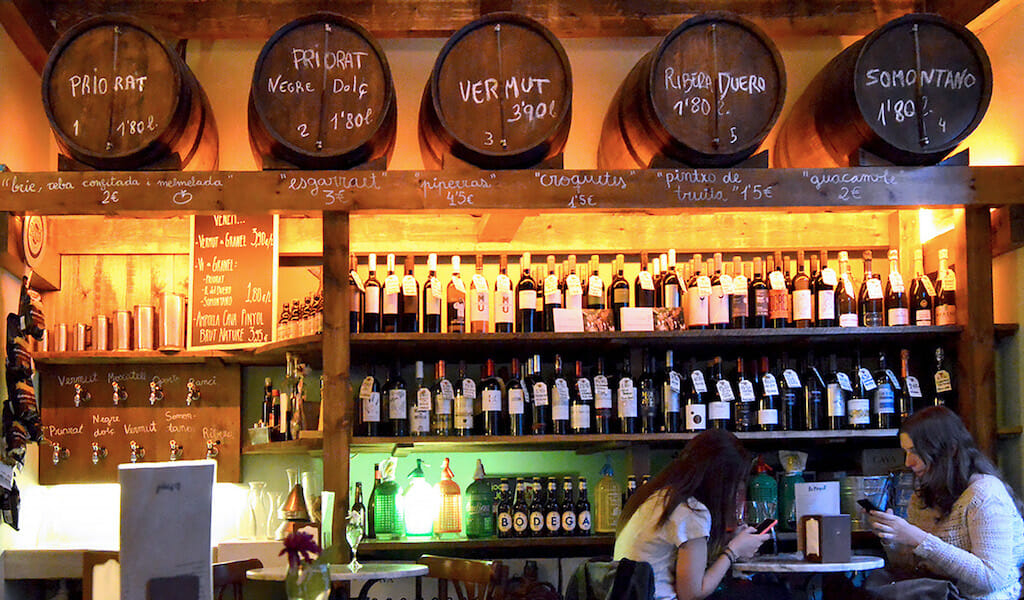 Barcelona | By Paula Mourenza
By Paula Mourenza
BarcelonaBars and literature are like bees and flowers: two separate worlds linked to each other through a symbiotic relationship that benefits both. Writers and characters have been the natural inhabitants of taverns and pubs in Dublin and London, bohemian cafés in France, Vienna and Madrid, and, of course, the old neighborhood restaurants and bodegas of…

Barcelona | By Paula Mourenza
By Paula Mourenza
BarcelonaOpened in 1944, La Cova Fumada (“The Smoked Cave”) is one of the most beloved gastronomic icons in Barcelona’s port area. Every day, people from all over the city come here to enjoy the powerful charms of the smell of fried fish, the spicy bite of their original “potato bombs” and the warmth of the…
El Tiet Taver Teca
Carrer Còrssega 382, L’Eixample
Tel. +34 93 141 0583
Hours: Tues.-Sat. 9:30am-12:30am