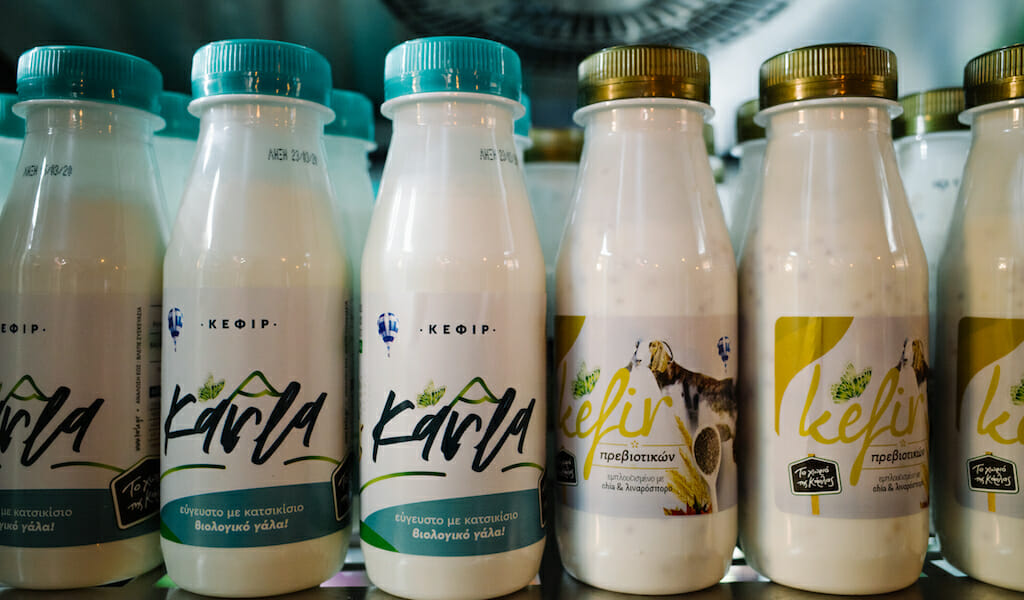 The refrigerators are spilling out onto the sidewalk. That’s the first thing we notice at Galaktokomio, a dairy shop in Ambelokipi. We step inside and, unsurprisingly, more of these large refrigerators line one of the walls of this tiny shop. The opposite wall is filled with shelves of pasta, trahana, almonds, flour, honey, tahini and other edible goodies, while a freezer filled with frozen pies, which look homemade, looms at the back.

But their most precious gems are in the refrigerators: dairy products, including some of the best yogurt in Greece. As we stand, enthralled by the contents of these gleaming cases, Vicky approaches us. The polite and professional shopkeeper, she begins to unravel the story behind this small shop in one of the most densely populated areas in Athens. 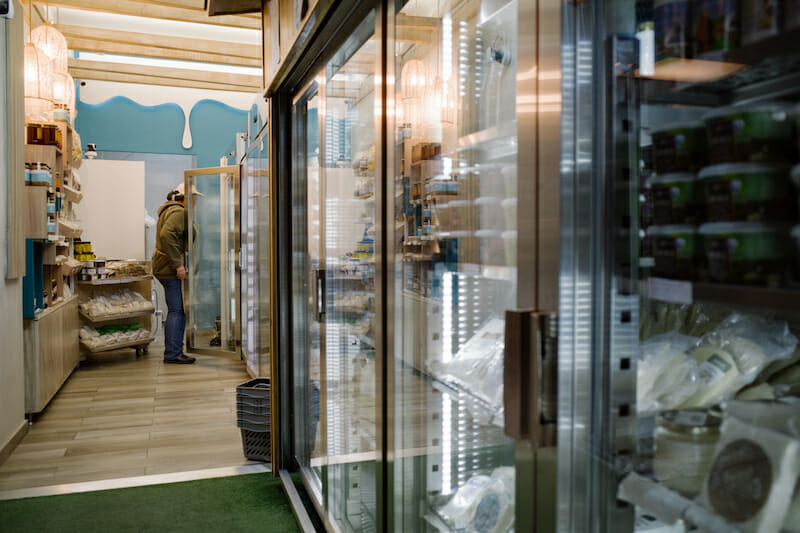 The store belongs to the Tsioukas family, who own a dairy company called To Chorio tis Karlas (Karla’s Village). Their farm, which has been in the family for around a century, is located west of Pelion Mountain in central Greece, near Lake Karla – hence the name. Grandfather Thanasis started it all, eventually handing the business over to his son. But it was his three grandsons, Nikos, Dimitris and Thanasis, who managed to take this small family business to another level.

The three brothers – now in their mid- to late 30s – always knew what they wanted in life: to take over the farm and steer it in a new direction. With this aim in mind, it was decided that each would study a different but complementary subject in university: accounting for Nikos, business administration for Dimitris and agriculture for Thanasis, the eldest. When the economic crisis hit Greece in 2010, they had all graduated and were working at the farm. Up until then, they had only been producing milk (primarily goat’s milk and sheep’s milk to a lesser degree) that was then sold to dairy farms and other producers. But with the economic recession, the wholesale price of milk dropped significantly. The family held a meeting and decided to stop selling their milk to others and instead produce their own dairy products to sell directly to customers.

Such endeavors require money, which they didn’t have much of, and the banks, due to the crisis, were very reluctant to give out loans. It took a lot of effort, patience and sacrifice, but they were eventually able to cobble together enough funds to start making their own traditional yogurt in 2011. 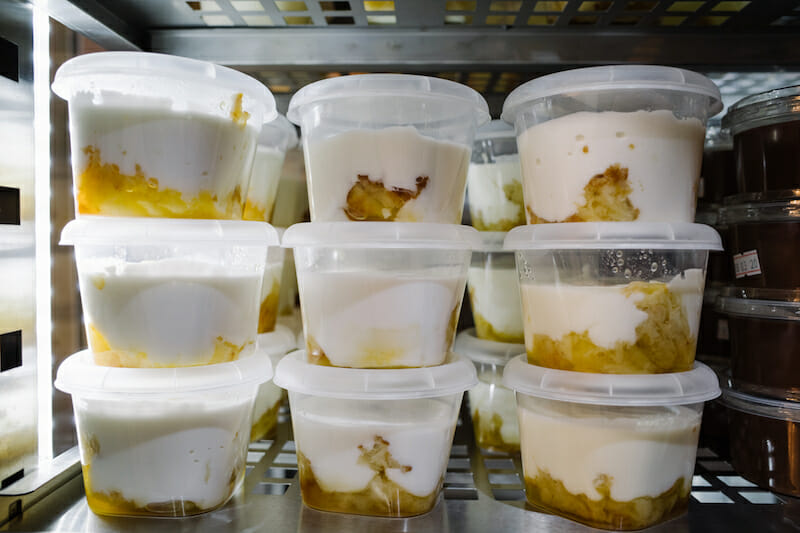 Their main purpose was to put out high-quality dairy products, like the ones they ate growing up in the village, and make them accessible to urban dwellers. This involves producing milk of only the highest quality, which is then brought to their dairy unit to be processed into a range of products, and then delivering the products themselves – this allows them to have absolute control over quality, from farm to consumer.

Each brother has his own refrigerated truck, which they use to deliver their fresh products to Athens every Monday. Since their production capacity was initially limited, they decided to work with – and support – small shops in Athens, most of which specialize in organic products; currently they sell their goods in around 110 shops.

The fact that they do the deliveries themselves has allowed them to build great relationships with both storeowners and clients, many of whom know by now that the brothers deliver every Monday, more or less at the same time, and will sometimes wait around to say hello or thank them for their work. “This is the highest reward I could ever ask for,” says Thanasis, who is unfailingly polite and radiates a childlike enthusiasm – it’s clear that he loves what he does deeply.

“If you see it as a job, you’ll go crazy,” he adds. “You must see it as a way of life and that’s how you’ll love it. That’s how we love it! There are no timetables here, no working hours, no weekends, no holidays, no nothing. The animals need you no matter what. You have to milk them whether it’s a Wednesday or Christmas day.” 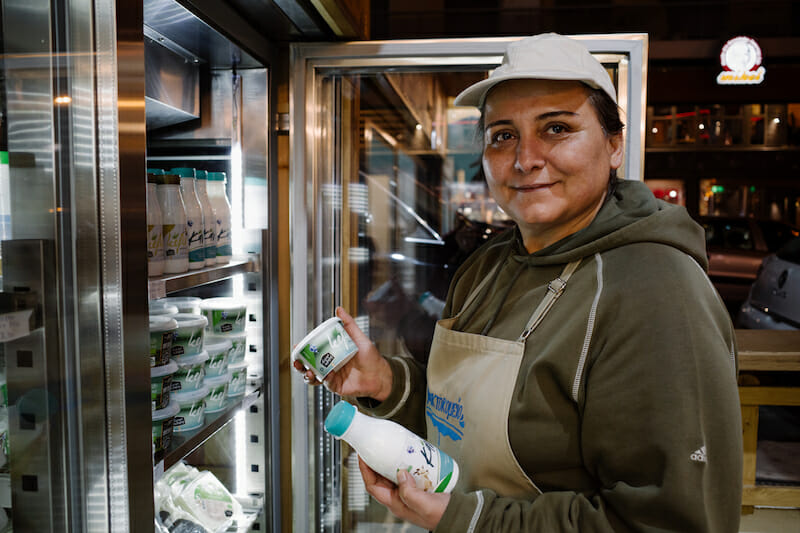 Their farm, which sits on the side of the mountain, at an altitude of 1,000 meters, has been certified organic since 2000, and the brothers are sincerely passionate and committed to this way of farming. They raise around 400-450 goats and 200-250 sheep, all native indigenous breeds. According to Thanasis, the native breeds adjust much better to the microclimate of the region and, most importantly, they produce higher quality milk, even though it’s less in quantity. All their animals are free range and feed on the various wild herbs that grow in the area (although they’re fed organic grains in the winter).

While we normally eat yogurt topped with honey, their yogurt is best plain – it’s almost sweet on its own. Plus, every velvety, creamy spoonful fills our mouth with the magic aromas of the flora that the animals eat, especially the herbs. “Free-range goats can basically climb anywhere and reach areas that are unreachable to most,” says Thanasis. “They will only pick and eat the very best, and this is why goat’s milk and meat is so highly praised.”

“The animals need you no matter what. You have to milk them whether it’s a Wednesday or Christmas day.”

Their parents are still around, but their father is too old to help much apart from offering his expertise and advise. Their mother, Hariklia, is their rock as well as their “muse,” giving them all the traditional recipes their family has been using for years.

The small unit where they process the milk is around 10 km away from the farm, in a village called Rizomilos. Their output is relatively small, quantity-wise, but they wouldn’t have it any other way – if they were to expand, they would need to source milk from other farms and subsequently lose the quality control they value so highly. Yet over time they have diversified their offerings without deviating from their guiding philosophy: an emphasis on organic, high-quality ingredients. 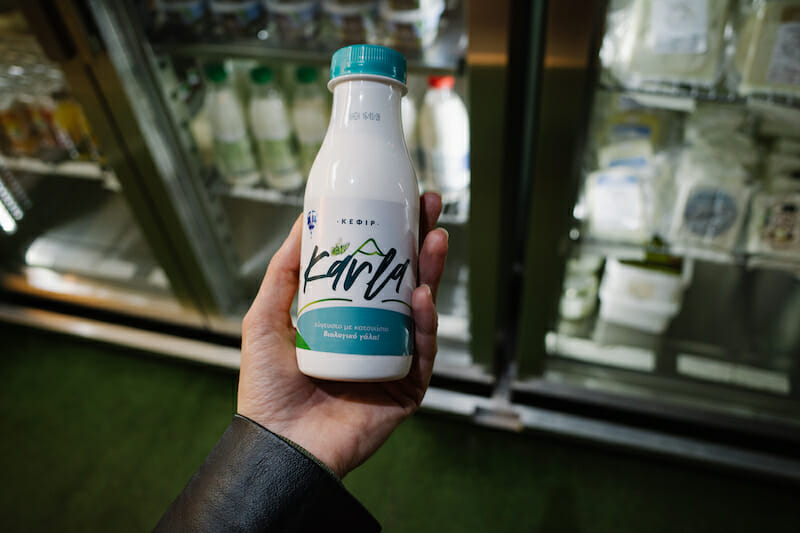 A few years ago they decided to open the store in Ambelokipi – the brothers wanted to have a retail shop in Athens since they were already down here weekly. They were also looking to expand into other products besides dairy: pies (which we swear are among the best we’ve ever had), desserts like rice pudding and baklava, almonds and almond milk, and pasta made with their goat’s milk and butter.

Soon the brothers will open a store in Volos, a town near their village, where they plan to make even more food items like bread, ice cream and more desserts. They’ll ferry many of these things to Galaktokomio, bringing even more of the village life to Athens – and perhaps filling a few more refrigerators. 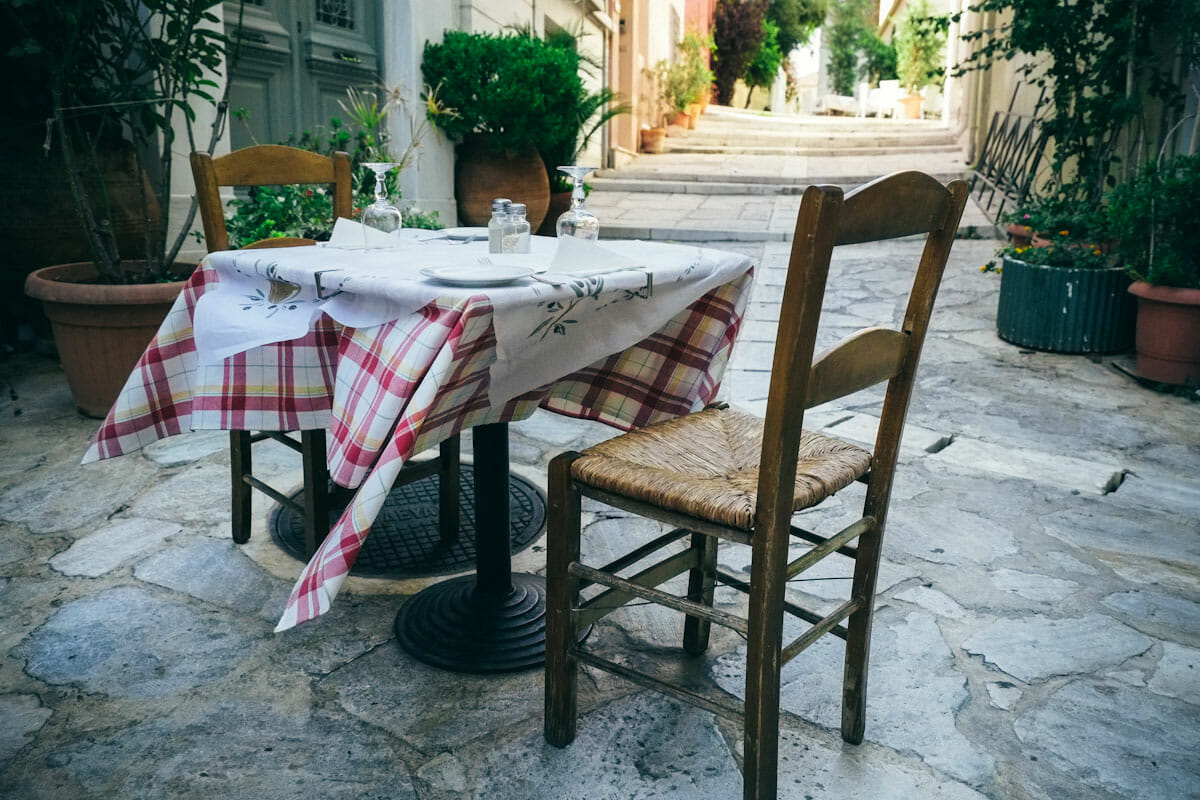