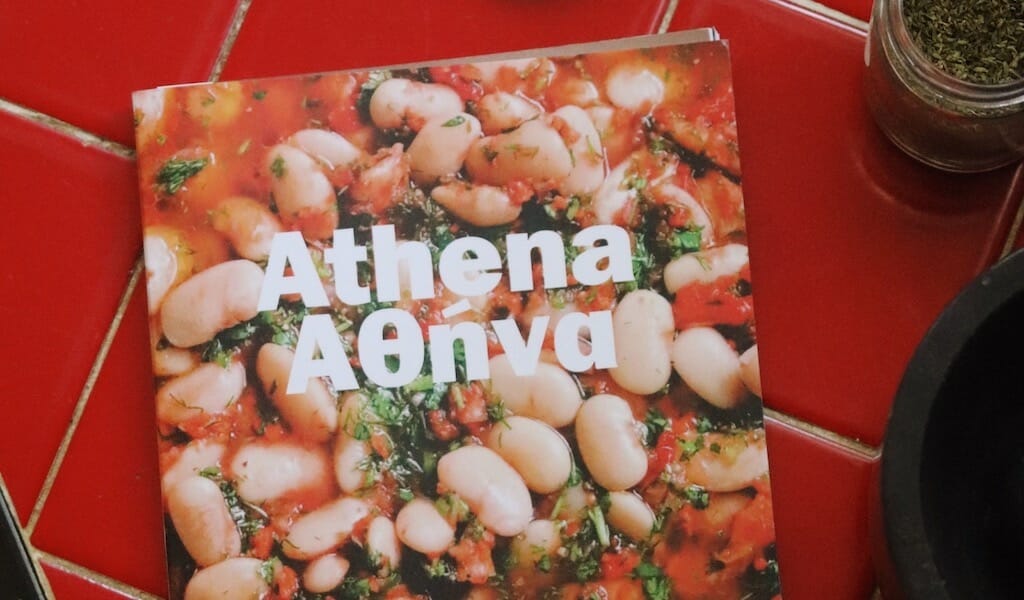 We recently spoke to Sharon Brenner about her mini-cookbook, Athena: Cooking from Athens, Greece, which introduces readers to Athenian-inspired dishes – with a focus on everyday food – as well as the experience of cooking and eating in Athens. It’s a small volume that opens the door to the city’s food culture.

Now based in Los Angeles, CA, Sharon previously lived in Athens from 2014-2017 and has been regularly visiting Greece since 2011. The creator of the website Records in the Den, she has also published work, including food writing, in a number of zines and digital publications. Her various other culinary ventures include teaching cooking classes, running a monthly cookie pop-up and founding the dining series Athena Dinners, to be held at Marta Gallery in LA. In addition to all this, Sharon is also an immigration lawyer, focusing primarily on artistic and creative clientele.

We chatted about the origins of her mini-cookbook, international perceptions of Greek food, and the inspiration behind her recipes. Below is a condensed and lightly edited transcript of our conversation. 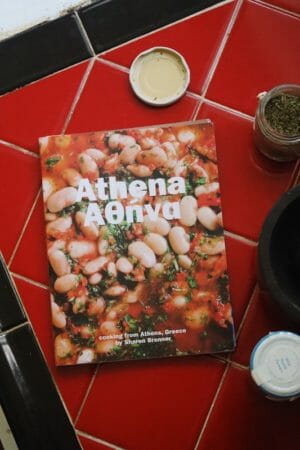 How did this mini-cookbook come about?

The truth of the matter is that I’d written a cookbook proposal and thought, I have all this content I should make a zine, thinking it would be all casual. Plus to get something published you really have to have a large social media following or some other kind of platform, and I don’t have that. So I thought, I’ll publish this little zine to try to grow my following and get the content out there because I worked hard on it. And then sort of see what happens with the larger proposal from there.

So this is your first foray into the cookbook world?

I’ve done recipe writing for a lot of independent food zines, but this is my first solo, self-published project. So whether or not I will do the full proposal still, I don’t know. I think I’ll submit it just because I have it done. But that’s the impetus, that’s where it started.

Outside of the cookbook proposal, what was the objective of writing the book? What did you want to try and get across?

Basically I love Athens, I think it’s an amazing city. And I felt like when I was living there – and I’d lived abroad before, it’s not like I was just sort of awestruck by the experience of living abroad – but I felt like what a lot of people envision, especially Americans and maybe even Europeans and people in other places who have exposure to Greek food, what they consider to be Greek food is really not what Greek people eat. Some of the most common Greek dishes are almost unknown outside of Greece. 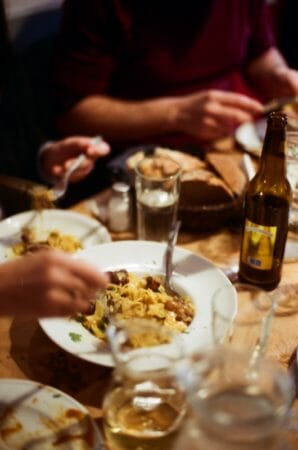 And, of course, in the spirit of Mediterranean living, I loved the rituals and modes of sharing food together, and all the experiences along those lines that I enjoyed in Athens. People often pass through Athens on their way to the islands and never really stop to give it a second think. And that has started to change a little bit. But still, even though it’s gotten more popular a lot of people don’t really stay too long, and if they do, they tend to go to the same places. So my objective with the book was to introduce both the cuisine but also really the experience of eating in Athens, because Athens doesn’t have so much of a distinct regional cuisine, it’s not like Rome, for instance.

So the zine includes dishes that I loved and found to be more common but that also introduce people to the experience of the city. I’d love it if someone came away from the book feeling like they had had dinner in Athens, or could pull off an Athenian-style or -inspired dinner at home.

We loved how in the book you talked about how a horiatiki (Greek salad) in the U.S., for instance, is often a bit sad, whereas in Greece it’s served for all to share and gets better as the night goes on, with the saltiness and acid mixing in with the oil. What you think international perceptions of Greek cuisine get wrong, especially when it comes to the way that Athenians experience food?

I mean, in terms of the dishes, and speaking as an American but not someone from Astoria or Chicago or some other place with a large Greek population, you see a lot of gyros, tzatziki, etc. People in Greece eat them, but they’re not nearly as widespread as, say, horta [boiled or stewed wild greens], for example, which is one of the most common dishes across Greece. I haven’t seen horta in America, and granted I don’t live in Astoria, but it’s stuff like that, where everyone knows tzatziki but I’ve only had it at maybe, I don’t know, five percent of the meals I’ve eaten in my life in Greece [laughs].

The way I thought about it was that some people would go to Greece thinking they knew what Greek food was. So they’d go and try to have authentic gyros or authentic tzaziki – they’d try to impose what they thought was traditional rather than looking at a menu and getting something that felt foreign to them. And then there are all these tourist places that are happy to oblige, to cater to that narrative. So there’s a touristic mindset that’s perpetuated by touristic restaurants. 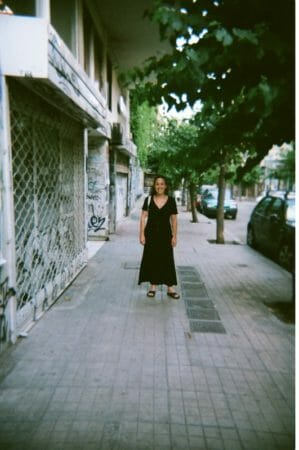 As for the experience, I lived in Athens at a specific time in my and my friends’ lives, which was basically adulthood before kids. So there was a specific kind of nightlife and eating out that I enjoyed and that was enjoyed by and exposed to me through my friends. Like you said, the salad is a good example – eating in Athens is about the sitting, the sharing, the talking, drinking, eating, smoking, all these things are wrapped up in the dining experience. And then, of course, the experience of cooking or shopping for the food, like going to the laiki [farmers’ market] every week and having that be a very accessible point to buy food. And while these aren’t unique to Greece, something about it there coalesced into this experiential way of interacting with food that I felt and still feel is not really represented in a lot of writing and cookbooks [about Greece and Greek food] because most of those books and articles really lean on traditional tropes or focus on the islands. I think sometimes there can be a bit of a disservice when people play up the traditional narratives of Greece and don’t really account for what modern Greeks are like in Athens.

How did you select the recipes to include? Were they inspired by certain places or memories?

Some of them are classics or very approachable, but not necessarily what everyone knows about outside of Greece. I picked some favorites but also the ones that I felt confident in. For instance, I love gigantes, giant white beans, and there’s a particular taverna in Athens that makes amazing gigantes and I go there every time I’m in the city. Greek pie, obviously it’s classic, but I really feel like making your own phyllo is so easy if you learn and practice, so I definitely wanted to include that.

But I like putting a different sort of spin or my own touch on these more traditional dishes. You can definitely see my Californian personality in some things, like the fact that I use miso paste in a lot of the recipes, because I think it’s a nice way to add flavor and salt, and that’s clearly not Greek. Or there’s the lahana dolmades, stuffed cabbage rolls, which I make with bratwurst because the first time I made them the shop was out of ground pork. So I just bought brats instead, and they worked really well – it was like extra seasoned pork. You know, little things like that. 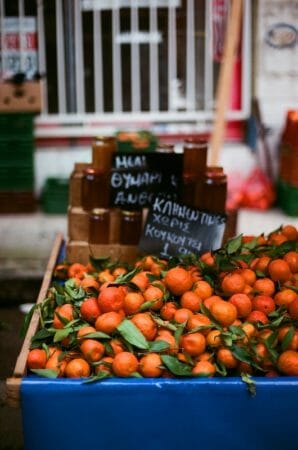 For anyone cooking Greek cuisine at home, do you have any general tips?

Make sure to get good quality ingredients – like fresh herbs and feta – and learn how to use them.

And don’t be afraid of olive oil. Unless you cook really frequently with a certain type of cuisine that uses a lot of oil, especially for Americans – I don’t want to generalize about other cultures because I can’t really speak to them, so that’s why I’m referencing American culture – many people [in the U.S.] don’t use a lot of oil or fat, and when they do it’s often dainty, like those oil sprays.

Fat makes stuff taste good, and olive oil especially when you’re cooking a lot of vegetables. I think people tend to be averse to a vegetable-heavy diet because they think it’s bland or that it won’t really satiate them. It’s probably because they’re not adding enough fat or acid or whatever the case might be.

Is there anything that I missed that you think our readers should know or would find interesting?

My hope is that [the cookbook] transports people. Especially now that we can’t travel, this can hopefully be a window into Greek culture for people who have dreamed of going to Greece but haven’t been yet. So that when they do eventually go, they feel a little bit more knowledgeable and prepared in terms of what to seek out.

Click here to purchase your copy of “Athena: Cooking from Athens, Greece,” out now. 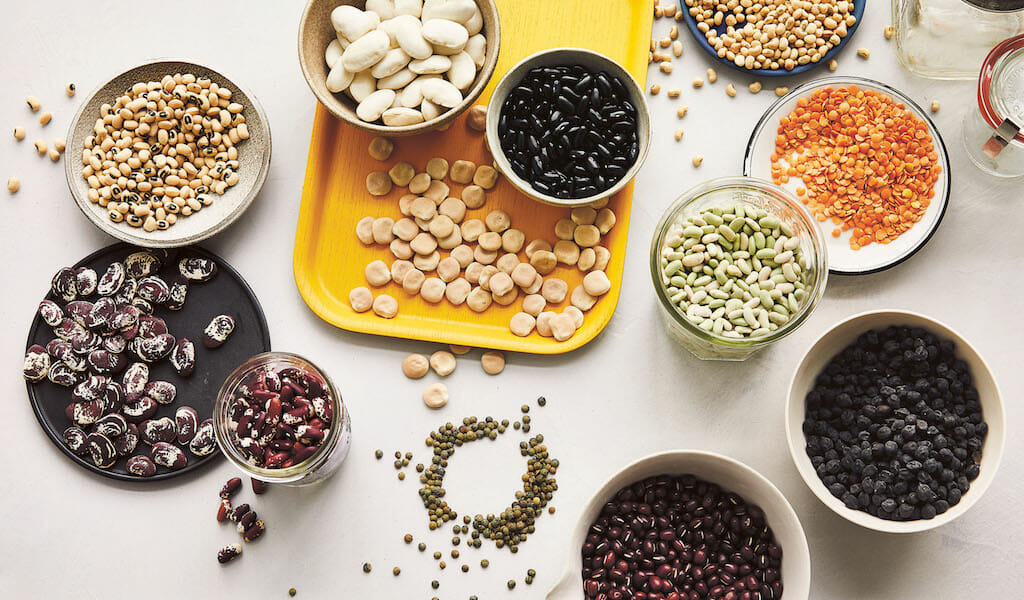 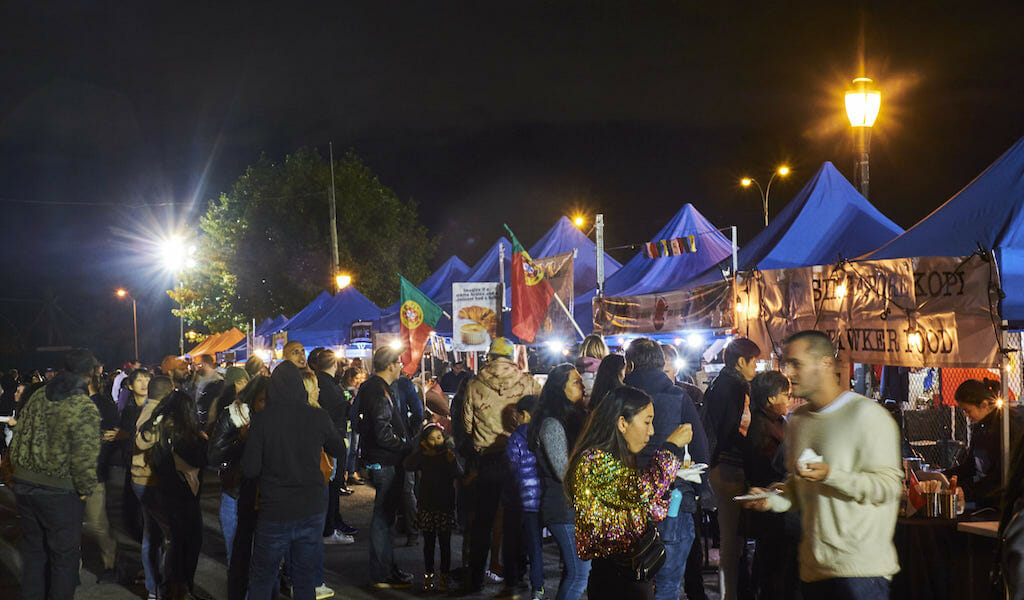 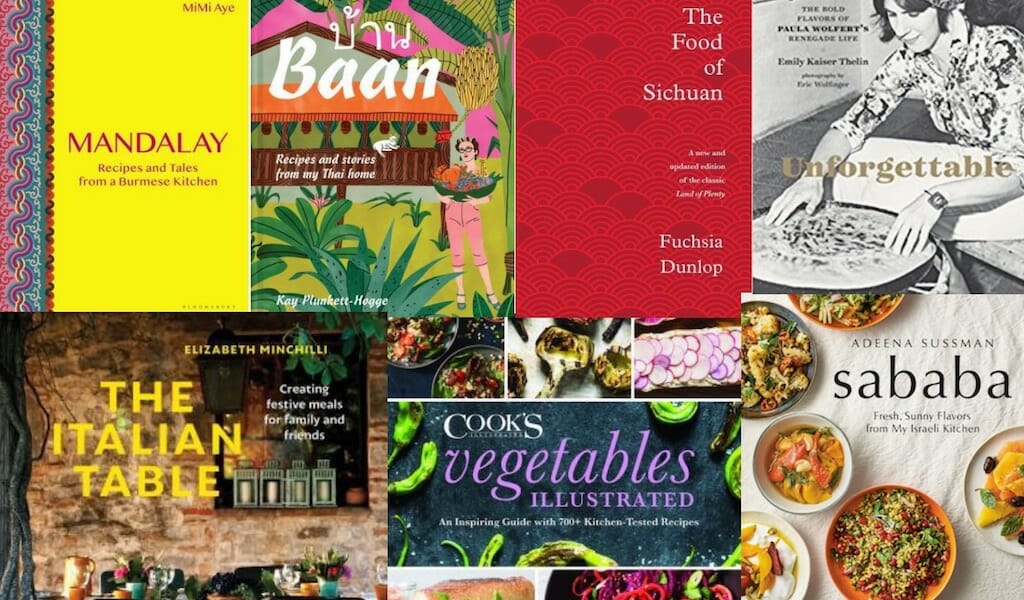 Elsewhere | By Culinary Backstreets
By Culinary Backstreets
ElsewhereIn our experience, one of the best ways to learn about noteworthy new cookbooks is to sidle up to a food writer and ask what they’ve been cooking from. With that in mind, we asked the authors featured in our CB Book Club this year to share their favorite cookbook or culinary-related book from 2019.…