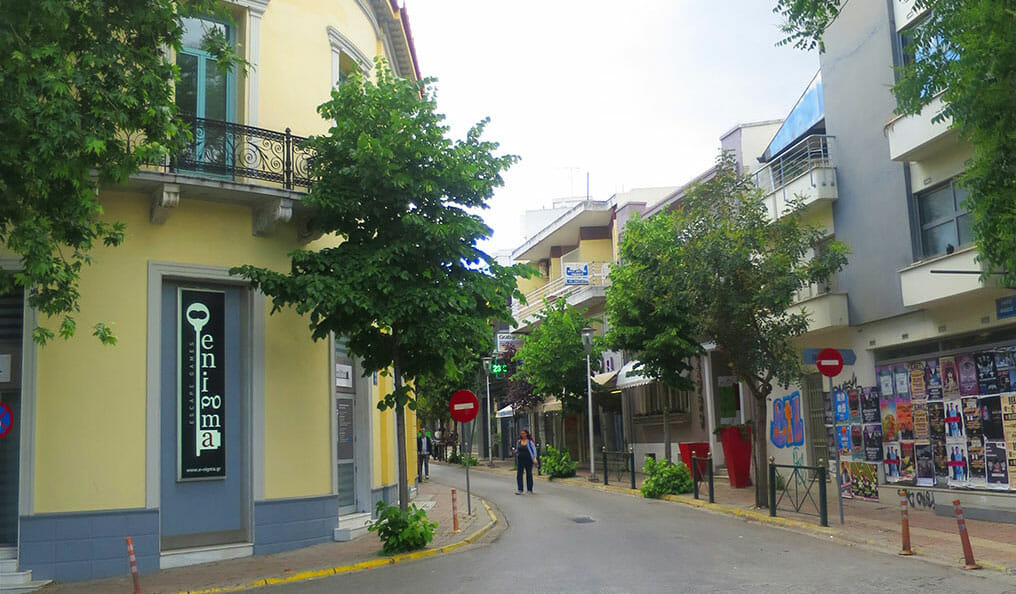 As you approach Maroussi by train, it is difficult to imagine that 100 years ago it was full of mansions with lush gardens – some still standing today – olive orchards and vineyards.

Situated 13 km north of Athens, Maroussi (AKA Amarousion) was the home of Spyros Louis, the first athlete to win the modern Olympic marathon event in 1896. It is also where the modern-day Olympic Stadium and sports complex are situated. The train was connected to Maroussi in 1885, when it was also known as “the beast,” and it took three hours for the beast to make the trip from Omonoia. Fortunately, these days the same trip takes only 30 minutes, making this lively neighborhood an easy destination for the curious traveler (or Athens local) looking to step back a bit in time.

Never quite as posh as the nearby suburb of Kifissia, Maroussi was until 20 years ago very famous for its pottery workshops due to the presence of excellent clay in the area. Most of the workshops have gradually disappeared, although there is still a large exhibition and shop on Kifissias Avenue, where you can buy hand-crafted clay pots and other ceramics at good prices.

Although the municipality of Maroussi houses three large malls, the main reason to go is to stroll around the pedestrian-only streets of its center, which are dotted with small, independent clothing boutiques and shops selling traditional foods from all over Greece. You can enjoy a coffee and snack in one of the numerous cafes that set out tables on the sidewalk or a full meal on one of the squares. 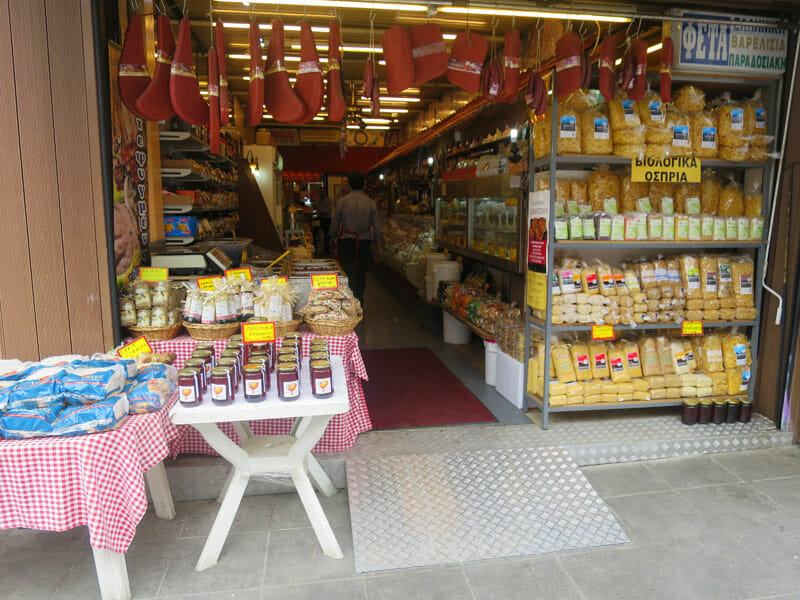 Better yet, once you have done your shopping you can enjoy the “loot” by picnicking on Andreas Syggros Estate, one of the largest parks in Athens at 95 acres, which can be easily reached on foot in about 10 minutes from the center of Maroussi. Andreas Syggros, one of the wealthiest Greeks of the 19th century, bought the area from a British archaeologist around 1875. He built his mansion amongst the Aleppo pine trees and landscaped the surroundings. Nowadays it belongs to the state. Besides the many shaded areas that are ideal for picnics, Syggros Estate also offers lovely paths for walking, biking or running – just be aware that it tends to get crowded on weekends.

We’ve rounded up some of our favorite food destinations in Maroussi by street. Ermou is the main shopping street that connects the train station to Vasilissis Sophias street. It was one of the first ones to be pedestrianised and is the heart of Maroussi.

Founded 40 years ago by Ioannis and Athina Chasioti from Northern Greece Chasiotis Nuts is situated at the top of Ermou, close to the train station. This shop still roasts nuts daily on the premises. You can also find other delicious things to buy there, such as dried fruits, grains and handmade chocolates.

The oldest bakery in Maroussi, Papasymeon Bakery, at the corner of Ermou and Nikolaou Plastira, opened in 1927 and is still housed in the same beautiful building. This bakery is mostly known for its tiropitakia, small cheese pies made with feta and anthotyro (a ricotta-style soft, white cheese). The pies are always warm and freshly baked, and it’s very difficult to resist eating more than one. The hand-kneaded sourdough bread is also tasty and softer than most sourdoughs because of the addition of oil to the dough, and though it’s baked into very large loaves, customers can buy by the portion.

Founded in 1975, Chatzimanolis still looks as it did in the 70s. It sells an array of dried herbs and spices as well as “memorial paraphernalia,” incense and edible sugar decorations. Evangelia Chatzimanoli, the daughter of the owner, is now running the shop and will courteously help you find what you’re looking for. This is a great place to buy freshly milled coffee as well as good quality honey and nuts.

Aram Batanian, a Greek of Armenian ancestry, opened his version of a delicatessen over three years ago under the name Aram, preserving all the charm of the old shop that stood here the 40 years previous, with big sacks filled to the brim with legumes and pastourma hanging from the ceiling. Batanian is the proud co-owner of Ar-Kas deli meats, a company making pastourma (dried, cured beef), soutzouki (spicy sausage salami) and other meat products since 1922. So it comes as no surprise that next to the old fridges packed with feta and hard cheese from small producers all over Greece, you’ll find a great selection of deli meats cut to order. We loved the “odorless” pastourma, which was similar to Italian bresaola and the tyrozouli cheese from Crete. Everyone is eager to help here, so don’t be afraid to ask.

Although there’s seating available outside the souvlaki specialist Posto, it’s not the most picturesque of places to enjoy a meal. This doesn’t mean you should give it a pass, though. Giannis Goupios opened it in 1998 and still runs the place. “We make everything here including the gyros,” he proudly told us, and perhaps that’s why Posto has gained some very devoted customers over the years. We highly recommend the chicken gyro, one of the best in Athens.

You know that a bakery is good if there are lines of people waiting to be served. That’s the case with Amarousion Bakery, probably the most respected bakery in Maroussi and one of the best in Athens. The bestseller is a traditional sourdough loaf available in 5 different types, made with stone-milled flour from Ioannina and baked in a wood-fired oven.

Bougatsa is a type of pie, typical of Northern Greece, usually filled with either cream (sweet, like a custard pie) or cheese and other savory fillings. Konitsa might not be an old, traditional shop, but it does make a great bougatsa (by Athenian standards at least) as well as many other types of pie – not to mention all the phyllo that goes into all the pies. The central location of the shop makes it a favorite spot for locals, who can be seen enjoying their coffee and treats on the tables outside.

Panorama is situated towards the lower end of Vasilissis Sophias Street (or the beginning if you are entering Maroussi from Kifissias Avenue). Its specialty, trigona Panoramatos (“Panorama triangles”), are triangular pockets of syrupy phyllo dough, filled to order with thick patisserie cream. This dessert is a specialty of Panorama, a suburb of Thessaloniki, but these are some of the best you’ll find in Athens. 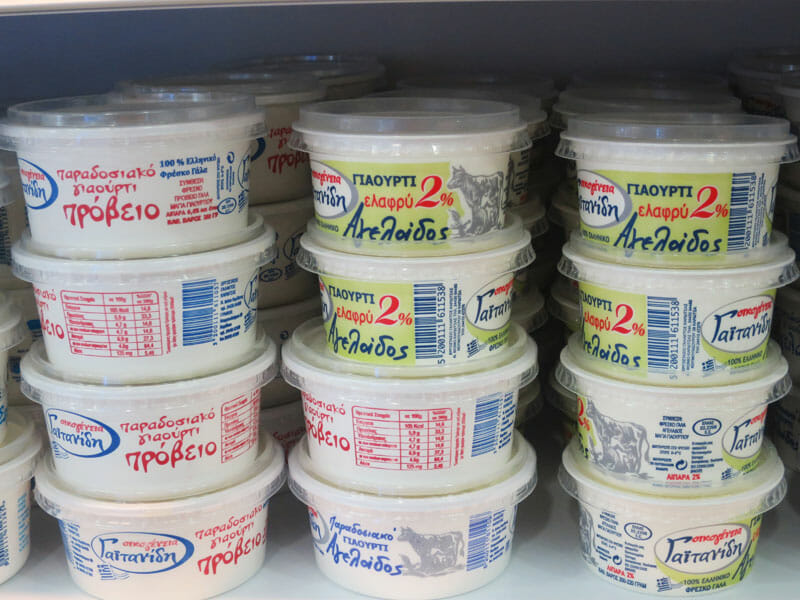 Kastalia Square is a Maroussi landmark and notable for its Artemis Amarysia statue (the original was stolen in the 1940s), fountain and the numerous pigeons running around. Your best bet for enjoying a cup of coffee or some food is Kastalia Café-Ouzeri. Opened in 1974 by Christos Delonis and Thomas Zafeiris as a traditional kafeneion, serving coffee and ouzo with the appropriate meze plate, it was a favorite meeting place for lawyers and businessmen. Nowadays the children of the owners still serve good Greek-style coffee, meze to accompany ouzo and grilled meats. There’s a large selection of ouzo and tsipouro of course, but most importantly, everything is fresh and delicious. If you arrive around noon the place is usually packed, as ouzo is an aperitif and is traditionally drunk before lunch (or dinner).

A relatively new addition to the food shops of Maroussi, Gaitanidis has quickly become a favorite among locals. The first shop of the family, which hails from Asia Minor, opened in Karditsa, Northern Greece, but they’ve grown so much that they now have several shops in Athens. The shop offers a good selection of fresh milk (goat’s, cow’s and sheep’s milk) as well as yogurt, fresh cream (a rarity in Greece) and cheeses, all made by milk produced in Karditsa. Their specialty is baked yogurt, made from sheep’s milk. Milk and cultures are poured in a tray and are slowly baked in a low temperature in the oven. Once cold, the yogurt is served from the tray and gradually loses moisture, leaving the last servings thick and creamy. 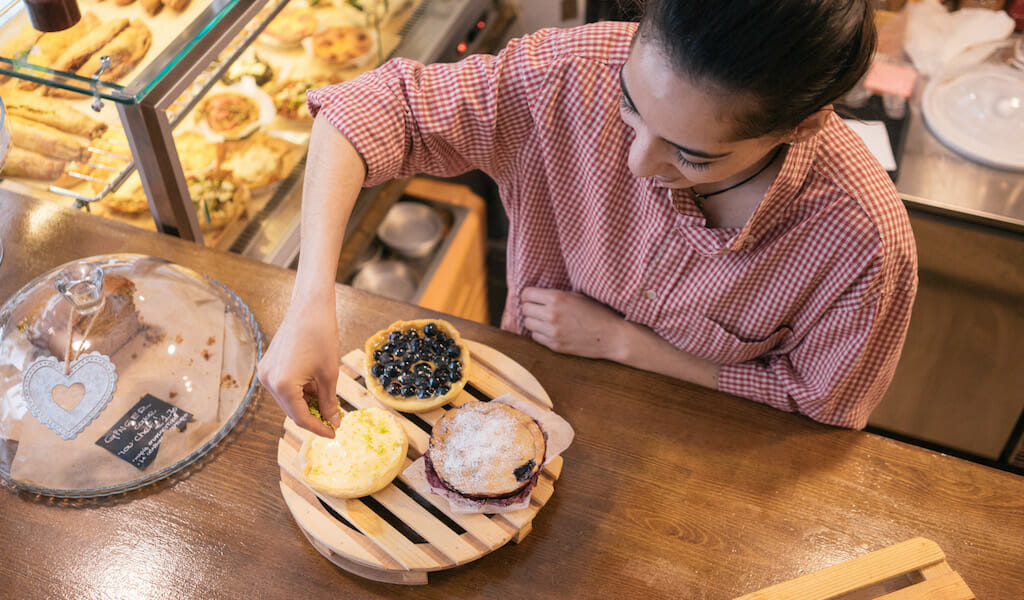 Athens | By Carolina Doriti
By Carolina Doriti
AthensThe humble pie is perhaps one of the world’s oldest street foods. A quick survey of global food history finds pies everywhere, from East to West, mirroring the local ingredients, agricultural practices and dietary needs of different cultures. In Greece, pies certainly go way back. There are a few references to pie-making during the Minoan…
Maroussi