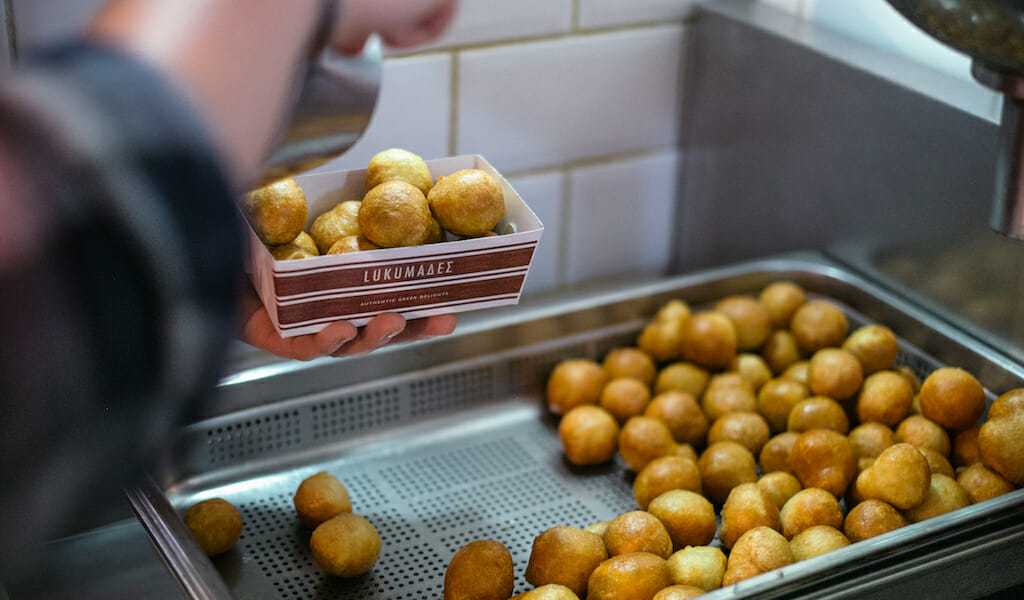 In the era of such food crazes as the “cronut,” it seems that every city has its own classic fried-dough treat that is now being reimagined, and in Athens, loukoumades (think of them as the Greek predecessor of doughnut holes) seem to be getting a major overhaul as of late. Why revamp such a perfect childhood classic, you might ask?

Loukoumades are considered to be one of the oldest recorded pastries (and desserts, for that matter) in the world – in fact, the ancient Greek poet Callimachus and philosopher Aristotle wrote about these bite-sized, fluffy fried-dough balls. The triumphant winners of the first Olympic games in ancient Greece were the ceremonious recipients of xarisioi plakoi (χαρίσιοι πλάκοι), or honey gift-cakes. Leave it to the newer generations to take the baton and run with it, creatively reinventing a classic. Two shops in Athens have recently made an impression on us for doing just that.

In the popular hangout of Plateia Agias Eirinis (a square lined with bars and cafés) in Monastiraki, Lukumades initially caught our eye with its sizable crimson neon sign, which practically lures you to come try a bite. Since opening in 2013, the shop has received several awards for its friendly service and unique take on loukoumades. Bill Carousos, a member of the team behind Lukumades, tells us that their inspiration to open the venue came from “memories of our childhood during the summertime on the islands, eating loukoumades mixed with fruit and kaimaki ice cream. Our mothers and grandmothers used to cook them for us and taught us a few key ‘pointers,’ which is what sets our loukoumades apart.” 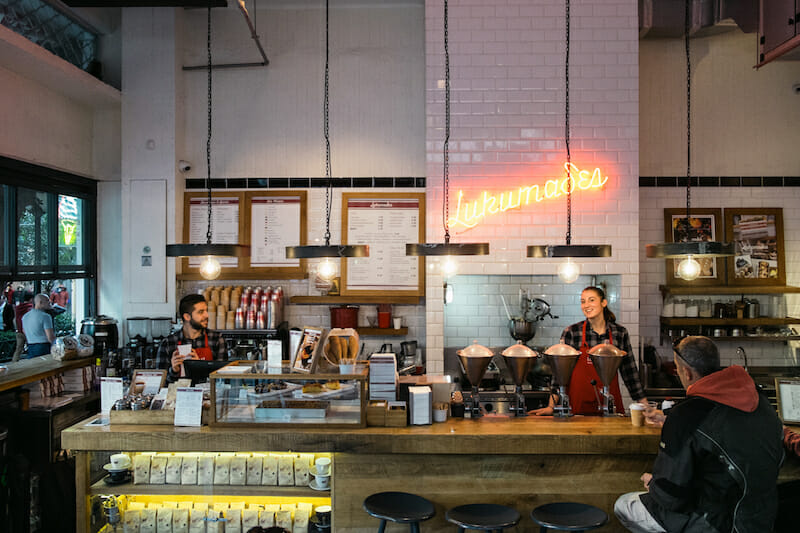 The shop’s concept is straightforward: They make their dough fresh daily and the loukoumades are fried to order in an open-plan kitchen and then either covered with a list of tempting toppings or “filled” on the spot with a variety of indulgent injectables. Their sinful secrets? They use a traditional recipe that calls for the highest quality of raw and fresh materials, everything is prepared made-to-order and, finally, they fry on a traditional “old-school” gas burner in a large pan, changing the oil frequently to ensure that every order has that delicious authentic taste.

Our favorite was the bite-sized chocolate praline-stuffed loukoumades drizzled with just a touch of white chocolate. To relive the owners’ childhood memories, we recommend “Yiayia’s” (“Grandma’s”) loukoumades, with honey, cinnamon, walnuts and bougatsa ice cream – a phyllo pastry dessert from Thessaloniki, filled with custard cream and topped with powdered sugar. You’ll definitely want to wash this rich dessert down with a cup of cappuccino or a glass of water. The shop is open until 3 a.m. on weekends, perfect for a late-night treat in the city center.

Loukumami, previously located in Panepistimio, recently reopened in the heart of Athens’ northern suburb of Chalandri. Loukumami is truly an international doughnut den for all cultures, ages and gastronomic preferences. The owner, Vassilis Hadjandonis, was inspired to open the shop after taking a road trip through Spain in the winter of 2012 and accidentally discovering the churro, the Spanish doughnut. He recalls, “My wife and I sat down at this little café in Madrid and ordered a couple of churros; it was my first time trying them and the waiter also suggested a rich, hot chocolate to warm up with. Once they brought them over to the table, the waiter recommended dipping the churro into the hot chocolate. I didn’t need much convincing – it was absolutely delicious, and I was hooked.” Upon returning home to Athens, the memory of those churros stayed with him. It dawned on him that in fact every country has its own version of doughnuts and a nostalgic weak spot for them.

Hadjandonis, who had always considered himself a “foodie,” opened Loukumami the following year, and the shop has become famous for frying up three international versions of the doughnut: beignets (the type fanatically worshipped in New Orleans’ French Quarter), Spanish churros and Greek loukoumades. He tells us, “The dough of all three has its own personality; each has to rest a particular amount of time – it’s a sensitive process.” He serves traditional straight-shaped, star-ridged churros covered in cinnamon and sugar with a small cup of rich and thick Valrhona hot chocolate – perfect for dipping, as the Spanish do. His square-shaped beignets, made of deep-fried choux pastry, come with a variety of options for toppings or fillings. Our favorite was the one with a velvety raspberry cream filling, with powdered sugar on top. 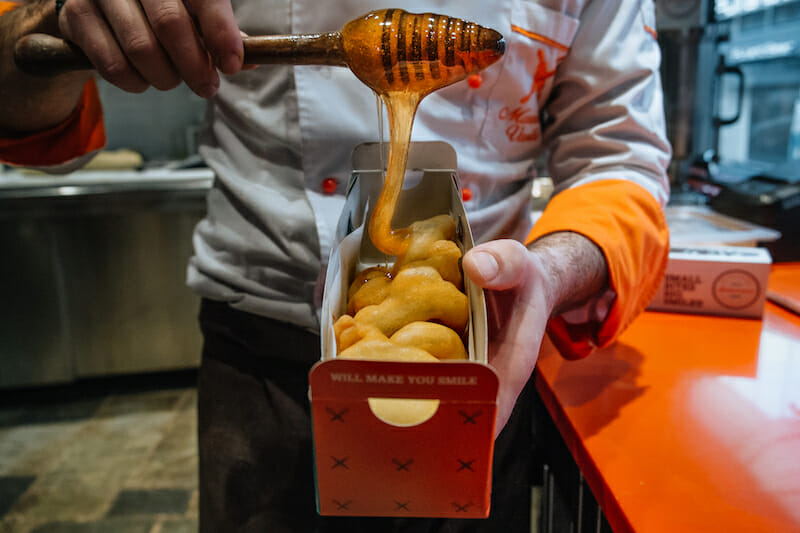 And then there are the loukoumades, which are served in a ring shape – the way Hadjandonis remembers his family making them during his childhood in the 1970s – as opposed to the traditional doughnut-hole shape, with a variety of toppings to choose from. We sampled an order of “the classic,” with locally sourced Greek honey and aromatic cinnamon, which we can’t recommend enough. For something more unusual, there’s loukoumades with Spanish-style chocolate sauce, which includes several different types to choose from: negro (dark chocolate), con leche (milk chocolate), caramelo (caramel) or gianduja (hazelnut chocolate).

“We are fanatics about keeping the loukoumades crispy on the outside and soft on the inside,” Hadjandonis tells us. Even when re-envisioned for modern palates, it seems, some things should never change about this tasty sweet.