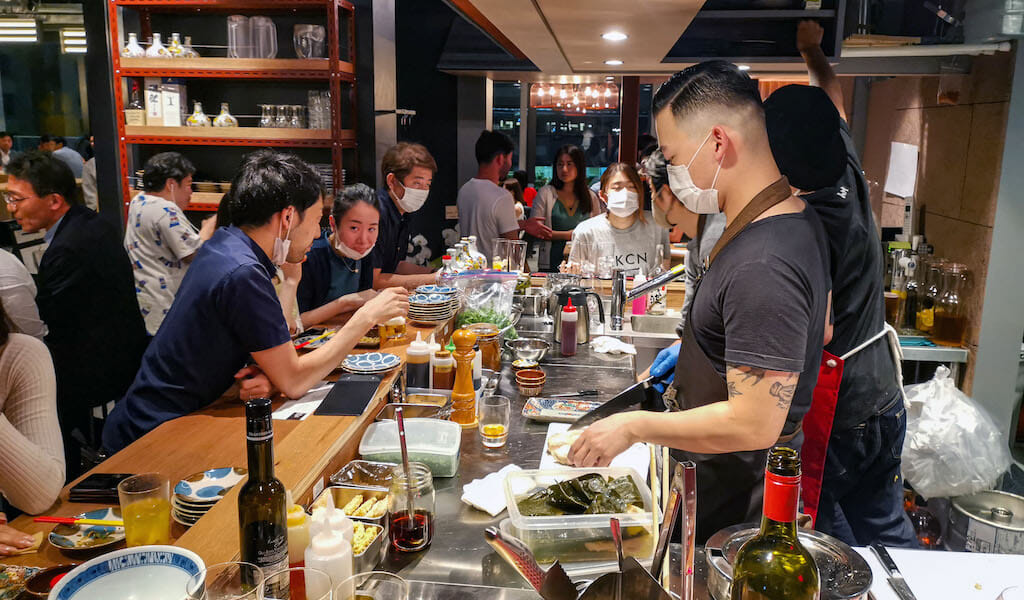 Post-Coronavirus Tokyo: Reopening a City That Never Fully Shut Down

A grim sense of irony checked my delight at discovering one of my favorite restaurants had begun offering a lunch menu. Arossa Shibuya, a small, cozy restaurant that prides itself on excellent Australian meat and wine, stopped daytime service over a year ago, long before the coronavirus crisis. But as a sign of the times, they have resurrected their offering, beefing up the course and the price, likely as a bid to reel in more revenue.

Watching the global pandemic unfold from Tokyo has jarred uneasily with a surreal sense of continuity across the city. Whereas several countries were under strict lockdown, Tokyoites were requested to show “self-restraint” and avoid the three Cs: crowds, closed spaces and close-contact settings. Restaurants were permitted to continue operating with limited hours – last orders for food and drink were at 7 p.m. before shutting the doors at 8 p.m.

While the approach was met with fierce criticism, many have had to admit that Japan is a strangely flawed success story. By May 26, coronavirus cases were so low that the state of emergency was officially lifted for Tokyo, with only some restrictions remaining.

It is early June when, unable to resist, I venture out for my highly anticipated Arossa lunch.

“Long time, no see!” beams my favorite waiter, whose name I shamefully do not know, but we have now entered that phase where it is a little awkward to ask.

He presents me with a starter that looks more like a high-end dessert: an organic vegetable parfait of carrot mousse topped with exquisite jellied consommé. I dig down with my spoon and gleefully discover lentils at the bottom. It’s these unexpected little moments of joy that add to the dining out experience I’ve missed.

As I work my way through a grana padana-topped ragu on perfectly cooked fettuccine, I casually enquire as to how they’ve been doing. Like many restaurants, they have been relying heavily on takeout.

The atmosphere, however, is little changed. While the doors are wide open and a couple of tables have been removed to create social distance, seats are full and the advertised dessert has actually sold out – not that I can complain about the delightfully smooth Bavarian cream placed before me.

The next week, I arrive by midday to secure a table, but I find the place empty. “It’s been like this a lot of the time,” my favorite waiter says with a small smile. “But on some days it picks up.” Apparently our busy lunch was somewhat of an anomaly.

Clearly not everyone is rushing back. According to a survey carried out at the end of May and in early June by Retty, a large crowd-sourced restaurant review platform, nearly 94 percent of respondents said they wanted to go back to eating out, but nearly half of those who answered indicated they would do so less frequently, and the vast majority indicated they would expect greater hygiene measures, such as increased sterilization and better ventilation. Restaurants are duly responding. Open doors and windows, spaced seating and hand sanitizers at the door are commonplace. 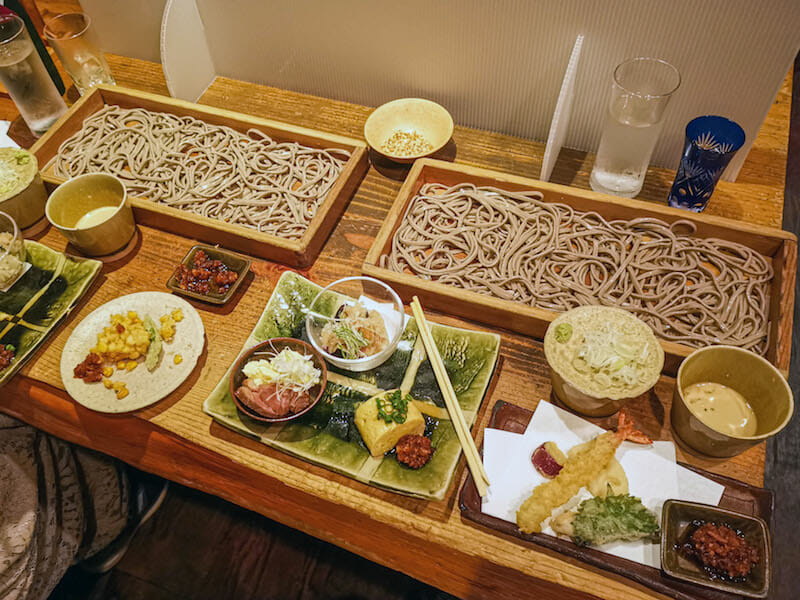 On a Saturday night, I go for dinner at Kaoriya in Ebisu, a place popular for itasoba, giant wooden trays of buckwheat noodles. You can choose between thick or thin noodles – of course, I always go for thick. They’re extra springy and perfect for slurping up the traditional dashi-based dipping sauce or the creamy sesame version. The vast dinner set, which includes tender slices of duck, tempura and more, is a mere 1580 yen, and even the makeshift screens dividing the shared tables can’t detract from such expertly executed dishes. Perhaps the events of the past few months prove how adaptable we humans are as a species.

Sunday afternoon is a surprisingly empty train ride into the central area of Shibuya for a meal with friends. In the evening, in search of a post-dinner drink, we stumble upon Sake Bar Chintara, drawn to its comprehensive and well-categorized sake menu and large windows revealing a brightly lit, welcoming interior.

It’s the second week of June so operating hours are still limited; we are the only people in there. A young woman serving us estimates they only have about a third of their usual customers. “We actually have space to walk on the streets around here,” she laughs as she pours an intriguingly complex sake from Ouroku Brewery in Shimane Prefecture that pairs beautifully with sweet Saikyo miso cream cheese.

Summer is always a low season for sake, something which Akira Kanda, Chintara’s owner, confirms. Brewing takes place over the winter and last year’s sake is often released from early autumn onwards. “We have to wait a bit longer,” he says.

Fortunately, the government has made some efforts to support the struggling industry. From April, izakaya have been able to apply for a special license to sell alcohol in small take-out portions to attract customers who want to drink at home. In a separate measure, restaurants and cafés have been granted temporary permission to use the pavement in front of their stores for extra seating in a bid to maintain social distancing and create a safer dining environment.

It feels very much business as usual, especially as masks were always commonplace in everyday life in Japan.

“We’ve opened the whole wall of windows at the front for better air circulation,” says Anna Nikulchenkova, the manager of Blink Cafe, located at the entrance of Blink Roppongi, a co-working space. “The atmosphere is getting better and better and more people are coming. A few groups came today for lunch and were sitting outside. But it will take some time to recover completely.”

The co-working space did not completely shut down – around 10 tenants continued to use the facilities during April and May. But Anna made the call to close the café in early April.

“It’s not been an easy two months,” she says quietly. “I cannot blame the people who continued operating, who needed to pay rent and who have families. But for us, it was safety that was more important than income, so we laid low. If we got coronavirus in here, it would have been a disaster.”

She makes me a decadent peanut butter banana smoothie at the perfect level of sweetness, so thick that I’m unable to down it in one gulp. As she bustles about the space, she points out a painting of Senna, a French bulldog that is her pride and joy. “Your workplace is your second home – you spend even more time there than in your actual house,” she says. “Hopefully people will feel safer coming back as we were closed before. We showed a sensible approach.”

With the lifting of all restrictions on June 19, many places are back to normal operating hours, although a few are a little more cautious. Some cafés and coffee shops have yet to reopen their eat-in spaces, and takeout is still an important feature, even among higher-end places. The Michelin-starred French restaurant Chez Olivier is continuing to offer a “take home” three-course weekend menu priced at 4900 yen.

Against this bizarre backdrop, an exciting and innovative dining space in Tokyo has just launched. Inside the Toranomon Hills skyscraper complex, Toranomon Yokocho has picked up on the so-called “yokocho boom,” a growing nostalgia for Tokyo’s old Showa-era shadowy alleyways of small bars glowing orange in the paper lantern light. This modern venture is a highly slick affair with cutting-edge design and 26 top restaurants that have moved into the space, serving up small plates at affordable prices. There is even a Tokyo gin distillery. 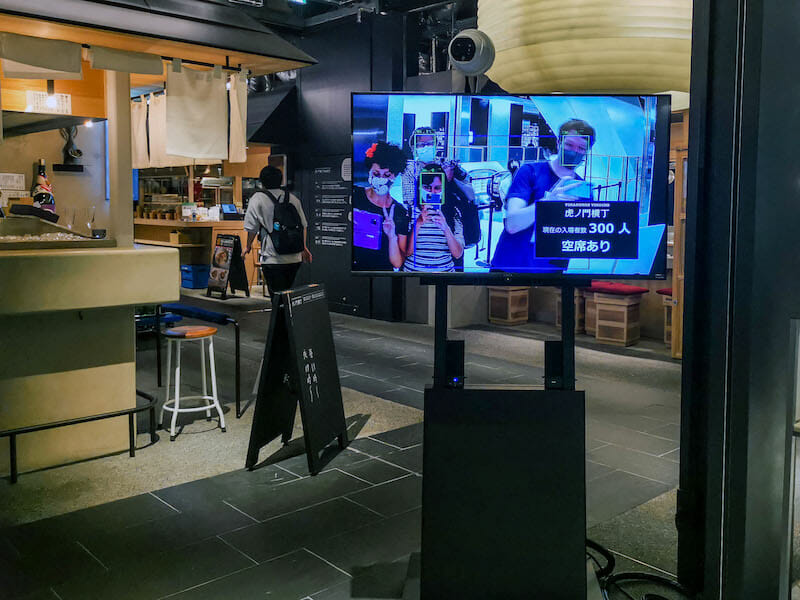 I head there early on a Tuesday evening in an attempt to avoid crowds but the place is already packed. Along with everyone else, I have my temperature taken at the entrance and hand sanitizer is everywhere. But once inside, there’s no denying that social distancing was left at the door. The entire concept involves squeezing onto tiny tables and hopping between different eateries. People are sitting round giant shared vats of spicy Korean hotpot; they are perched elbow-to-elbow at sleek counters, enjoying elegant pieces of sushi paired with sake served in wine glasses; or they’re leaning on a bar and sipping Taiwanese craft beer.

Some of the staff are in high spirits, fueling the festive atmosphere. One guy slicing up a tender chunk of stewed pork belly eyes passersby over customers’ heads at his already-packed counter. “Drink lots, please! Come drink!” he calls out frequently.

My night winds up with cinnamon-infused gyoza and exceptional ebi (shrimp) shumai from the popular Chinese restaurant Pairon. Overly full and in high spirits, I put on my mask and head to the exit, sanitizing my hands for what is perhaps the tenth time that night. I stop and stare at a camera scanning all our faces, below it a small monitor that informs me there are still 300 people inside. It feels very much business as usual, especially as masks were always commonplace in everyday life in Japan.

Yet leaving the buzzing atmosphere behind, an emptier train carriage is a reminder that not all of Tokyo is ready to join the party. Or perhaps this is a taste of the “new normal.” 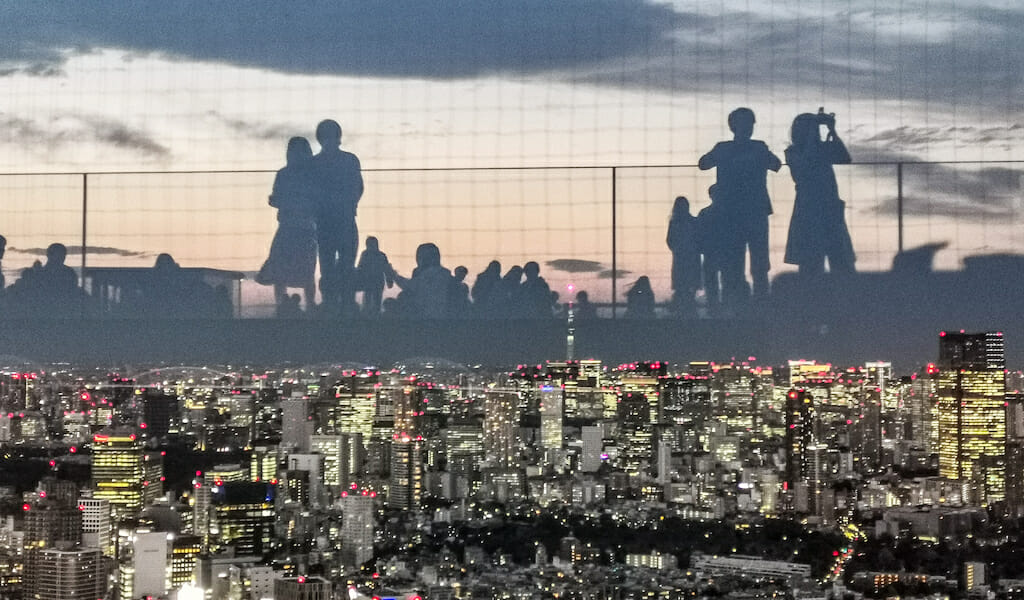 Tokyo | By Phoebe Amoroso
By Phoebe Amoroso
TokyoAs I sit down to write this on Tuesday, March 17, I am feeling uncomfortable. In truth, that’s mainly because I am overly full. Earlier, I cycled across town to a neighborhood I’ve never visited because a friend and I absolutely had to eat matcha cheesecake. We had been ogling it salaciously on Instagram and… 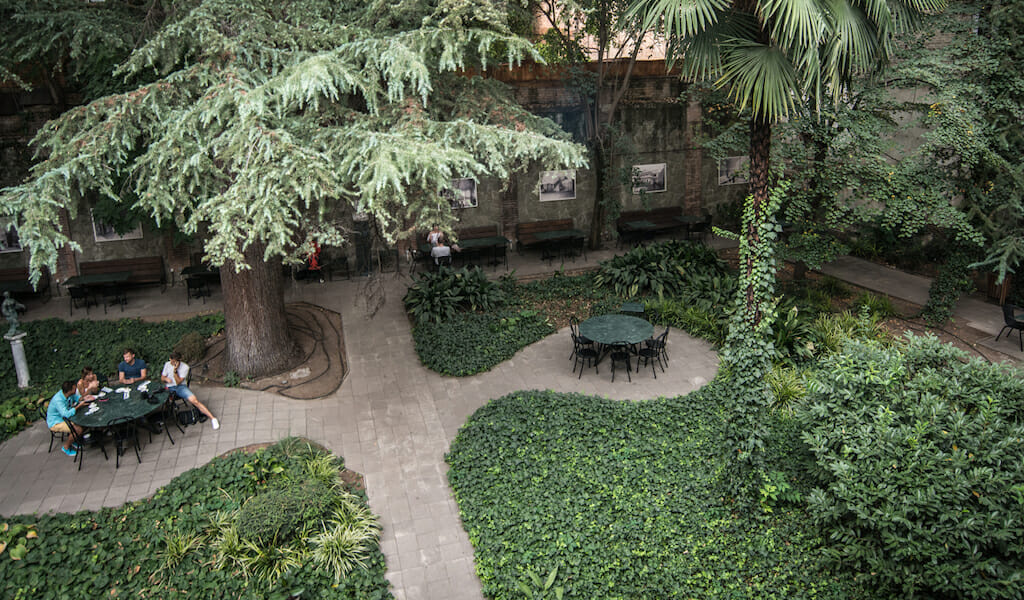 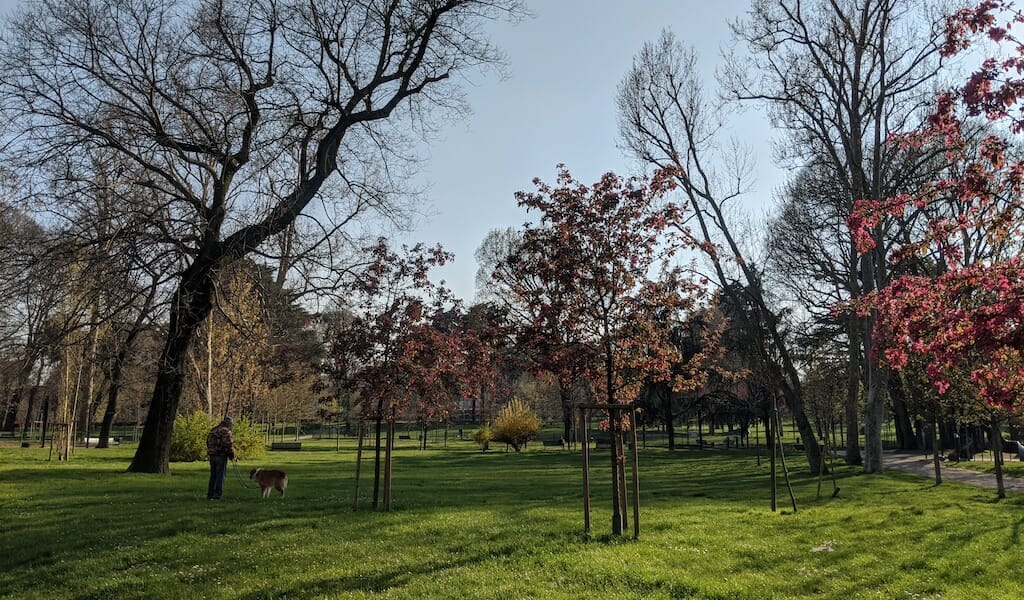