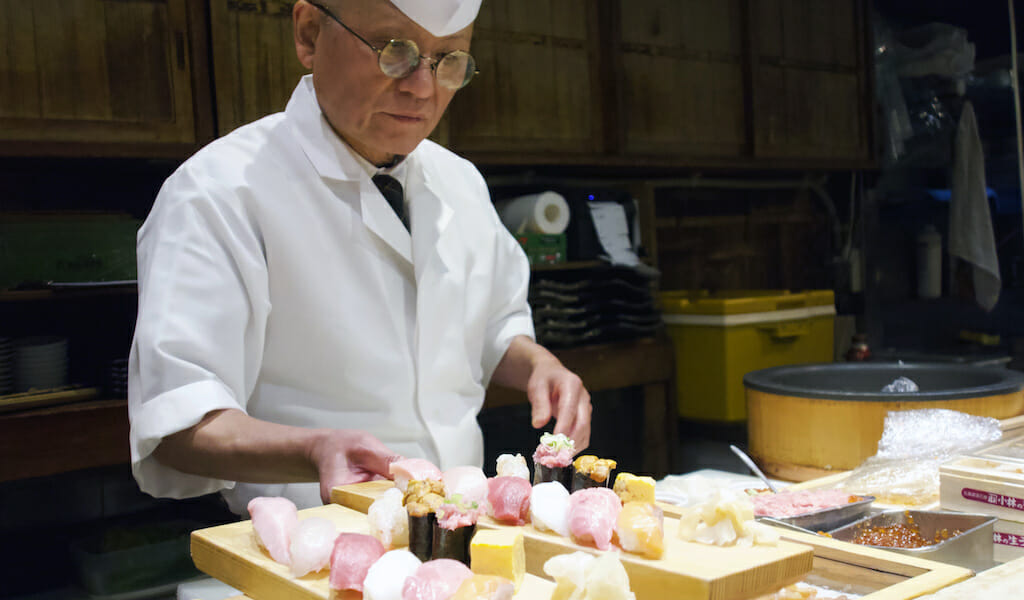 Mark Twain once famously remarked, “The reports of my death are greatly exaggerated.” Perhaps Tokyo’s beloved and historic Tsukiji Market can say the same.

Several years ago the Metropolitan government declared that Tokyo’s Tusikiji fish market needed to be relocated to a more efficient and workable location. Construction was begun on a new state-of-the-art site 2.3 kilometers away in the Toyosu area of Tokyo, strategically located facing Tokyo Bay.

The new market was scheduled to open in 2016, but there were many delays, including a scandal involving soil contamination, but the new market finally opened at the stroke of midnight on October 11, 2018. It took 600 vendors only four days to move from Tsukiji’s inner market to the new market and to begin trading the 3,800 tons of fish and vegetables that are expected to move yearly through Toyosu Market. 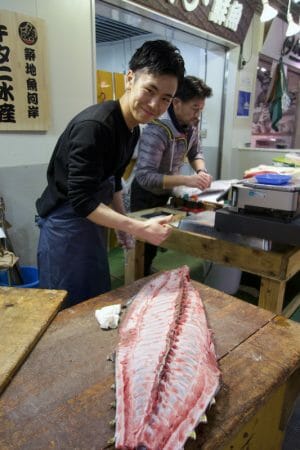 Yuriko Koike, the governor of Tokyo, urged the relocated merchants to view the move to Toyosu as a chance to rebrand the world’s largest fish market. A special tuna auction viewing section was built and sparkling, well-organized restaurants were constructed with the aim of luring locals and the hoards of tourists who had traditionally flocked to Tsukiji.

The reality was that it would be impossible to completely replicate an atmosphere that took 83 years to develop at Tsukiji, which was divided into two clear zones: the outer and inner markets. The vendors who moved from the inner wholesale market into the efficient, cutting-edge environment of Toyosu left behind a jumble of streets and alleys in Tsukiji’s outer market populated by fish and vegetable merchants, purveyors of prepared Japanese foods, knife stores, ceramic outlets and many restaurants selling the freshest sushi available.

Although serving separate functions, the inner and outer markets acted together to make Tsukiji something special. The lore was that people working the night shift in the inner market stopped in the small eateries located in the outer market for breakfast before heading home and that the fish served at these joints had just rolled off boats and onto the plate. Whether true or not, people loved the story and the hodge-podge ambience outside the market.

Locals wondered whether the Tsukiji outer market would continue to flourish once the wholesale fish market was relocated. Curious to find out if last year’s relocation of the inner market would mean the complete and total end of the Tsukiji era, we visited what was left of the outer market. What we found were many old friends waiting with welcoming smiles and the freshest seafood in Tokyo, not to mention some of our favorite food and kitchenware vendors.

Like many who dwell in Tokyo, we try to eat healthily and responsibly, eschewing inexpensive fish restaurants because they tend to serve fish that has been irresponsibly farmed or imported from countries that don’t promote sustainable fishing or might raise fish in polluted waters.

Most supermarkets often list the origin of fish and if it is wild or farmed, but it is sometimes difficult to ascertain more information. Shopping at the Tsukiji outer market has always assured us that we’d find the best quality fish. We were delighted to find our favorite fishmongers, whose fishing policies we know well, still in business. Many have even begun offering small portions of their fish to be eaten as sashimi while standing at the shop, making Tsukiji a great place to graze and enjoy on-the-spot dining.

What we found were many old friends waiting with welcoming smiles and the freshest seafood in Tokyo.

One of our favorite vendors is Takatoyo Maru No. 38, named for the tuna-fishing vessel used by the establishment. The company fishes in Pacific waters off of Kochi Prefecture on Shikoku Island, south of Tokyo. They use traditional long-line fishing methods, considered friendly to sea resources because they catch only targeted fish, with unique hooks.

Both otome maguro (albacore tuna) and hon-maguro (bluefin tuna) are pulled onto the deck of Takatoyo Maru No. 38, where they are immediately drained of blood, a long-established Japanese method for preparing fish. Takatoyo’s sales case at their Tsukiji stand contains selections of tuna with different prices for each piece. They are happy to take any piece into the back and slice it for sashimi to eat on the spot. Their stand is located in the Tsukiji Nippon Fish Port Market, a low cement building next to the former market and easy to find nestled under a large illustration of a tuna.

At Kitani Suisan, a newer indoor multi-vendor market opened three years ago on the same street as Tsukiji Nippon, we found a new fishmonger – Maguro Sengyo – and the opportunity to purchase nakaochi, one of our favorite Japanese indulgences. Nakaochi, often called “tuna scrape,” is the meat scuffed off the bones of a large tuna carcass. It can be difficult to describe the umami blast of nakaochi, but suffice to say it is considered a delicacy by tuna lovers and difficult to find in restaurants. When it’s available at Maguro Sengyo, there will be someone wrangling a large tuna skeleton in front of the stand. We were tempted to purchase a tray and go immediately to the second floor dining area, but instead brought the nakaochi home to have over rice for dinner.

One other new addition to the outer market is located back in Tsukiji Nippon. Any fish purchased here can now be prepared at an open kitchen tucked behind a blue curtain. For around US$5 per person, they will prepare your fish and serve it to you with rice and miso soup. At a stand opposite the kitchen one can purchase local craft beers and a variety of fried foods to complete a feast. 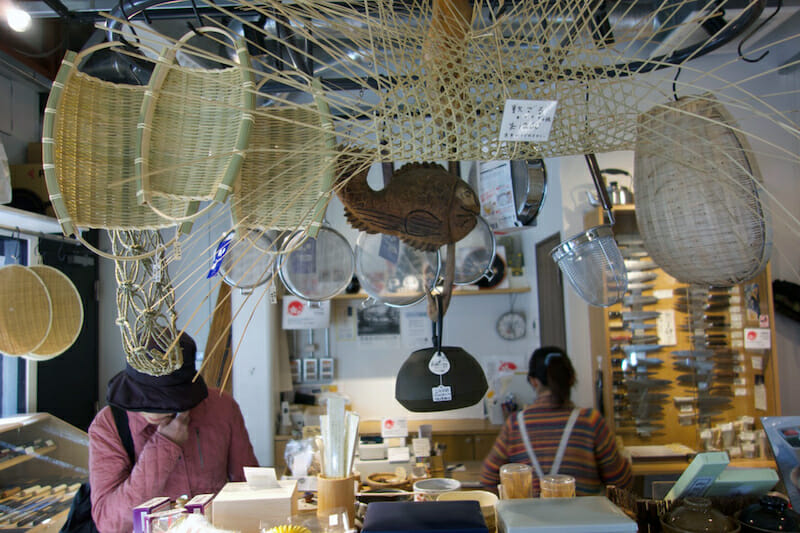 Walking the labyrinth of streets in the outer market we discovered that Tsukiji Hitachiya, our favorite household goods seller, has relocated nearby to an airy corner store. In business since 1956, the merchant selects the best and most beautifully designed kitchen items from around Japan and displays them in dazzling arrangements. It is often difficult to come home without a new fry pan or unusual hashioki (chopstick rests).

Almost kitty-corner to Hitachiya is Kumadeya Yamanoi Shoten, offering traditional kitchen and cooking supplies. The shop is a family business that has been passed down through several generations and sells items that are often difficult to find because they are so traditional. Our household cooking chopsticks (long ones for use in a wok) and bamboo utensils come from here.

Before heading home we stopped at Tsukiji Itadori Bekkan for traditional Edo-mae sushi prepared by the same veteran chefs we’ve visited for years. Located down an alley and through a maze of sushi joints, this has always been our go-to place. The restaurant, with its tiny 12-seat counter downstairs and stylish tables upstairs, is a bit different from those flashy sushi places with long lines snaking out their doors (although it, too, frequently has a line).

We love the uni (sea urchin) tasting with selections from different waters around Japan. The selection in the tuna sushi lunch course would tempt any serious tuna lover. A sushi lunch sends the chef into the various cases where fish is sequestered, ready to be sliced on the spot and arranged over rice. The prices are not cheap, but well worth it for the freshness, quality and Edo (old Tokyo) atmosphere. Sushi is available a la carte, but can also be purchased as more economical sets from an easy-to-understand menu available in English. At Tsukiji, you get what you pay for. 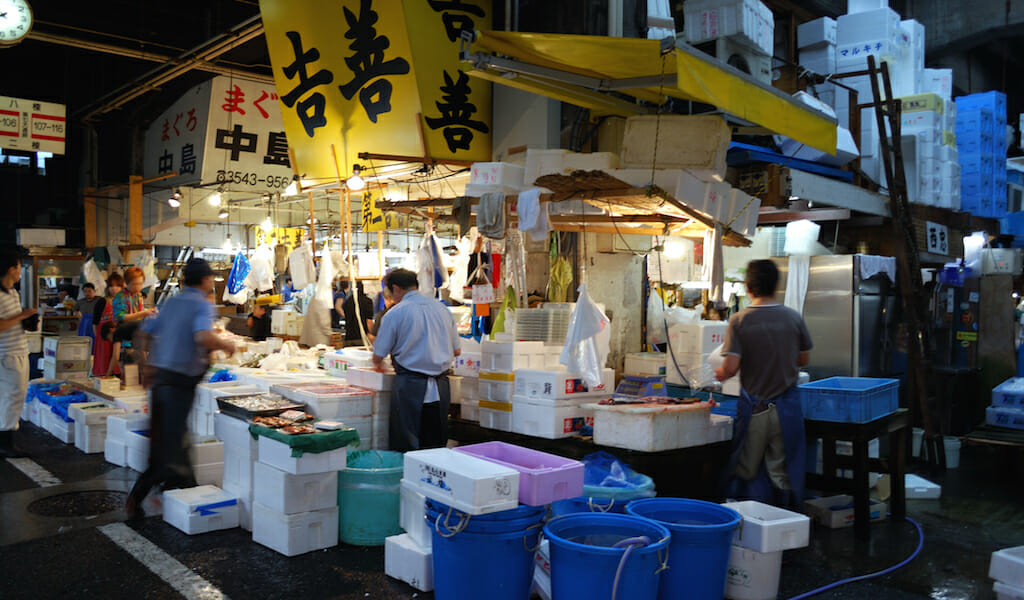 Tokyo | By Davey Young
By Davey Young
TokyoIt’s the end of an era for Tokyo’s Tsukiji Market. Saturday, October 6, will be the last day of operation for the world’s largest fish market, after which it will relocate two kilometers east to a new site on the manmade island of Toyosu. The move has been in the works for years (it was…