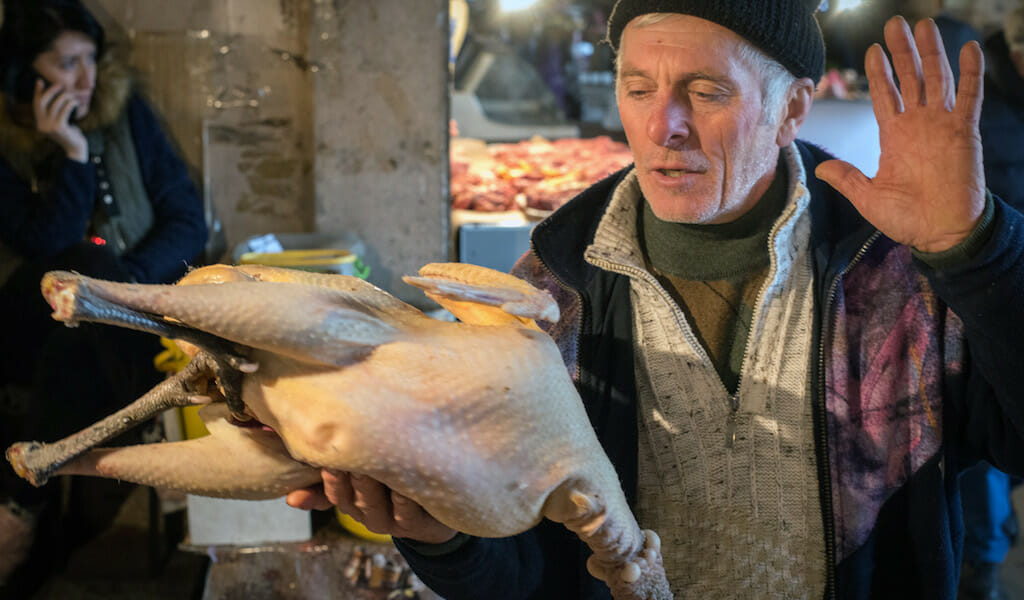 There was no wind and we were in the middle of the Black Sea on a bright summer day, puttering across the deep blue expanse in a chaika, a small wooden Cossack war ship that its Ukrainian sailors had equipped with a diesel motor. We were two days out from Yalta, and our captain, Myron, was looking eastward towards our destination of Batumi, his blue eyes glazed in a dreamy state of longing.

“Ah, Georgia. Satsivi,” he sighed. “Satsivi,” he repeated sensually to Roman, the first mate, as if it were the name of a beckoning siren. “I cannot wait.”

I was impressed he didn’t sob for khinkali and khachapuri like everyone else. But still, I had to quickly snuff out his reverie. It wasn’t a sadistic impulse – it’s just that the sooner you know the truth, the sooner you heal. Nevertheless, I hesitated. I had no life vest.

“Sorry Myron, but there will be no satsivi in Batumi. There won’t be any for six months. They make it in December, for Christmas, New Year,” I asserted softly.

He cut me with a defiant glance that shouted, “What do you know?” then fixed his wounded eyes on the deck. “No,” he muttered.

It wasn’t the first time I have seen satsivi, the femme fatale of Georgian dishes, break a man.

Satsivi is a thick sauce served cold or at room temperature (tsivi is the Georgian word for “cold”) and is essentially made of stock, walnuts, garlic and onions. Base spices include blue fenugreek, coriander, marigold and cinnamon, and while you’ll find the sauce smothered over eggplant, fish and chicken, “real” satsivi is drenched over turkey, a bird that only arrived in Georgia a couple hundred years ago. 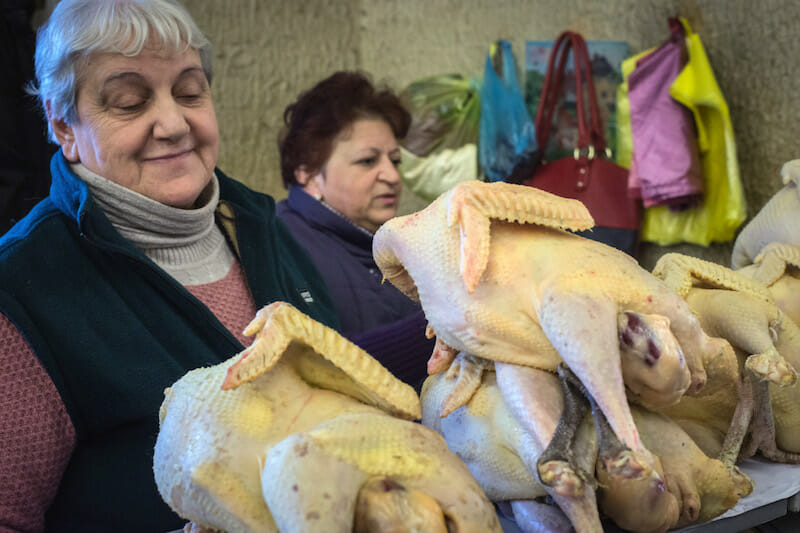 In her book Savoring Georgia, Rusudan Gorgiladze wrote of the 19th-century historian Platon Ioseliani, who claimed the turkey first arrived to Georgia on December 25, 1800, where it was promptly presented to King Giorgi XII. The king reportedly shuddered at the thought of ever eating one. The problem is that there is earlier documented evidence of the Induri – the Indian bird – some sixty years earlier.

Satsivi is a dish with clear Persian roots and spiced with flavors of India. But how it became associated as a holiday dish is anyone’s guess. Some contend that because it’s very time-consuming to make, people only prepare it for the most important feast of the year. And being served at room temperature does not make it very practical for summer months. Turkeys are also considered to be most delicious in winter, while walnuts were harvested in the autumn and are still fresh and oily.

“‘Taste MY satsivi’ is a common phrase in Georgian homes this time of year,” declares our friend Tamara Babuadze, who is currently co-writing a Georgian cookbook. She also talks of how challenging it has been to decide which satsivi recipe to use because everybody makes it differently.

I heard about a very heated Facebook exchange over satsivi recipes that would have drawn blood if not for the computer screens separating everyone. Do you thicken your sauce with corn flour? Do you boil and cool the vinegar before adding it to the sauce to make it really white? Maybe you add lemon juice to achieve the perfect whiteness? Egg yolk, whole eggs or no eggs? Cinnamon and clove or nutmeg? Do you boil the turkey, roast it, or boil and roast it? Cilantro or not?

“Walnuts should be white and chubby – meaty. It is an entire art to see how cooks squeeze oil out from the walnuts by just working them with their fingers,” Tamar explains.

“I love satsivi and you know, you go to someone’s house and they have satsivi,” he explained. “I went to a lot of houses.”

The result, she adds, should be a creamy, white yet slightly grainy sauce into which perfectly roasted deboned turkey is “exquisitely incorporated.” There should be an absolute balance of flavors, with cinnamon and nutmeg being the most difficult ingredients to get right: a little bit goes a long way, and heaven forbid you overdo it.

“Cooks are always competing with each other. Who has the tastiest, whitest satsivi? We [Georgians] go around and taste everyone’s and are obliged to act like a jury,” Tamar says.

The tradition, she says, is to cook satsivi on December 30 or 31 for the New Year feast and to keep it around for two weeks for the “Old New Year” on January 14. “My mother, for example, freezes it,” she explains. However, it’s not a hard and fast rule and was probably not always like this, since the holiday season is an evolution of customs that took a sharp turn in 1935 when Joseph Stalin secularized Christmas.

The seminary dropout turned the birth of Christ into a winter festival with a New Year’s tree and the Russian Santa, Grandfather Frost (Tovlis Babua in Georgian), dropping off gifts on New Year’s Day. Georgians continue to practice this ritual, although they are not content to splurge everything in one night. Partying is in their blood.

The holiday season is a binge that kicks off on December 17, Babaroba, or St. Barbara’s day and continues throughout the month, peaking on New Year’s Eve and winding down on Old New Year’s, January 14, although some people will still have the stamina for one last bash on January 19 for the Feast of Epiphany. If the alcohol won’t kill you, the satsivi might. 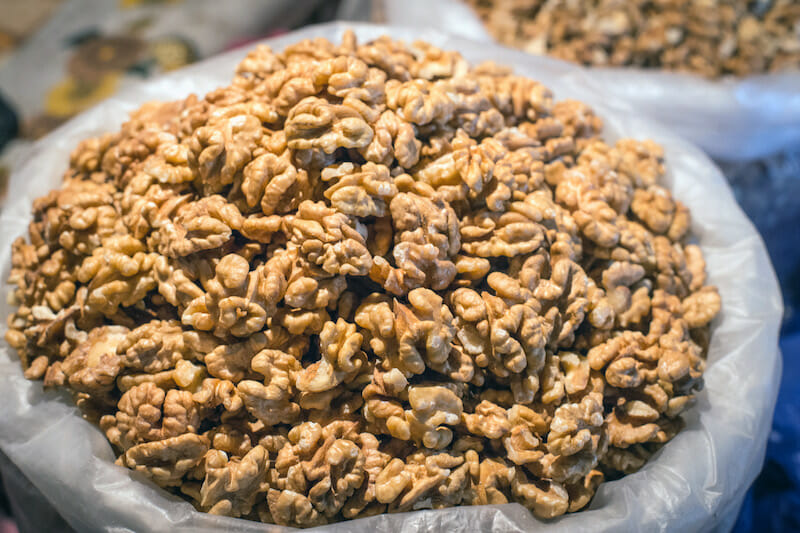 Our friend Erekle once came by in early January to wish us well, as is the custom. We offered him gozinaki, a holiday candy made of walnuts and caramelized honey but he refused firmly with both hands.

“I can’t eat walnuts,” he moaned, holding his gut.

Erekle woke up New Year’s Day with severe stomach pains and went to the doctor. The diagnosis was satsivi OD.

“I love satsivi and you know, you go to someone’s house and they have satsivi,” he explained. “I went to a lot of houses.”

We have an adopted family we spend New Year’s Eve with, and Iza’s satsivi exceeds all the criteria of satsivi snobs. It is creamy and white with hints of cinnamon and garlic, and we dip into the platter for seconds and thirds, sopping our plates clean with chunks of bread. Yet as delicious as it is, the satsivi is not the highlight of the feast, which is overflowing with luxuries.

Tengo is at the head of the table making warm, intimate toasts to each person, reminding us how fortunate we are to be here together with the people we love the most. 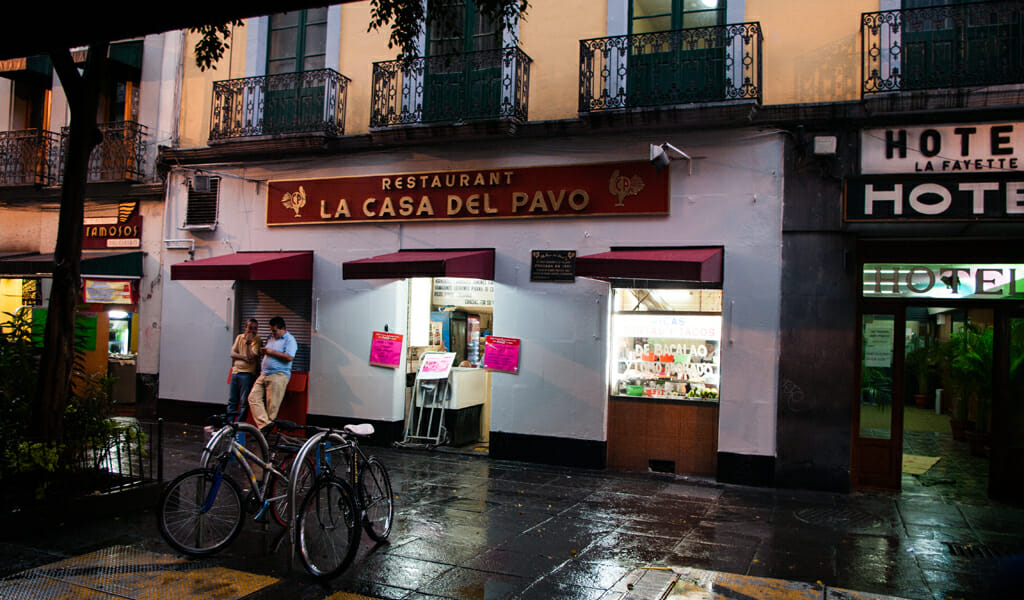