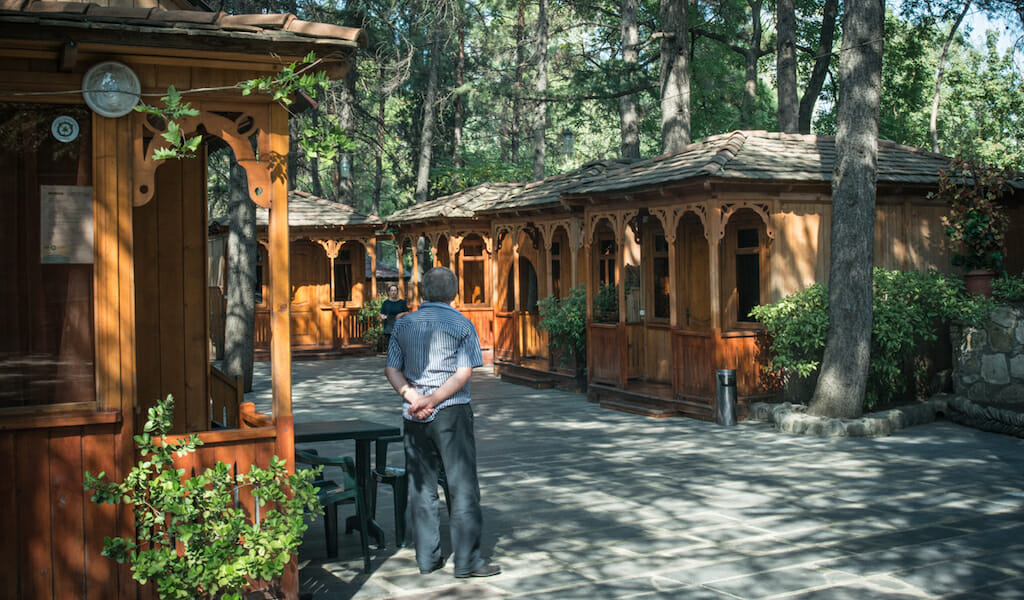 In 2005, the city of Tbilisi bulldozed a riverside row of some the best restaurants in the capital to make way for a lackluster park and a gondola to take tourists to the ancient ruins of the Narikala Fortress, which overlooks the Old Town.

City Hall justified this act of gastronomic destruction by stating the property had been illegally privatized under the previous administration, but everyone knew it was a land grab. And among the many restaurants it razed was Megrelebi Manoni, the best Megrelian restaurant in Tbilisi.

Of all the regions that make up “Georgian cooking,” the western province of Samegrelo is the most distinctive, relying on ingredients like corn meal, beans, nuts, hot peppers and sulguni cheese to conjure up dishes that are evocative of Latin American cuisine, yet profoundly Caucasian. In fact, it is customary in Samagrelo to eat with your hands, using ghomi, a thick polenta, to scoop up all sorts of dishes – vivacious stews loaded with adjika (a spicy red pepper paste), beans swimming in a swamp of cilantro, chunks of dripping pork offal bursting out of the sausage skin – and to wipe all that mess up from your chin. 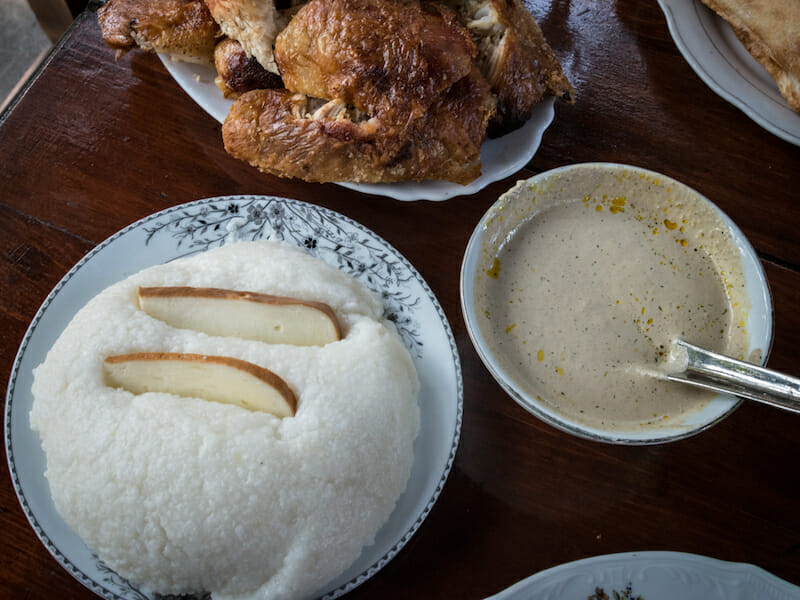 For a while after the restaurant razing, we depended on eateries that only served a few Megrelian dishes to get our fix. At the very least, we could count on finding elargi, a hulking hot glob of grits and cheese, and kuchmachi, a succulent combination of chicken giblets, coriander and pomegranate.

This was about the time we jumped on the Kakhetian wagon, visiting the restaurant Kachreti Champion down in Vake-Saburtalo so many times that we probably paid their rent each month. Or so it seemed, as they closed one day in 2009 and moved far into the cinder block wilderness of a Soviet-made suburb. Lucky for us, Megrelebi Manoni took their place.

“This is not a Megrelian restaurant, it’s our home,” owner Zuriko Khalandia insists. Displaced from the coastal city of Sukhumi during the War in Abkhazia in 1993, a conflict in which Abkhaz separatists fought for independence, the family came to Tbilisi to open their restaurant. “This is my wife Manoni’s food. She’s been cooking for 25 years,” he explains.

“This is not a Megrelian restaurant, it’s our home.”

The first thing the family did was refine the building’s Kakhetian peasant charm by putting up a dozen little wooden dining cabins on their patio, each one seating 8-10 people comfortably. If claustrophobia is a problem, you can sit in the dining room or at one of the outdoor tables. Otherwise, electric heaters keep the cabins cozy in the winter, and air-conditioners cool them in summer.

We used to see a lot of this private booth seating in Tbilisi – indoors and out – but the fashion has faded over the years. Yet, publicly chowing in seclusion has its charm. It’s the dining room away from home, where no one can eavesdrop on your conversations (or laugh at you if you pass out at the table).

Being about a ten-minute taxi ride from the center (traffic permitting) helps keep the tourists away. The Georgian-only menu is a clear indication of who the patrons are. We didn’t even glance at the menu on our most recent visit, instead choosing a simple dinner of some of the most iconic Megrelian dishes. 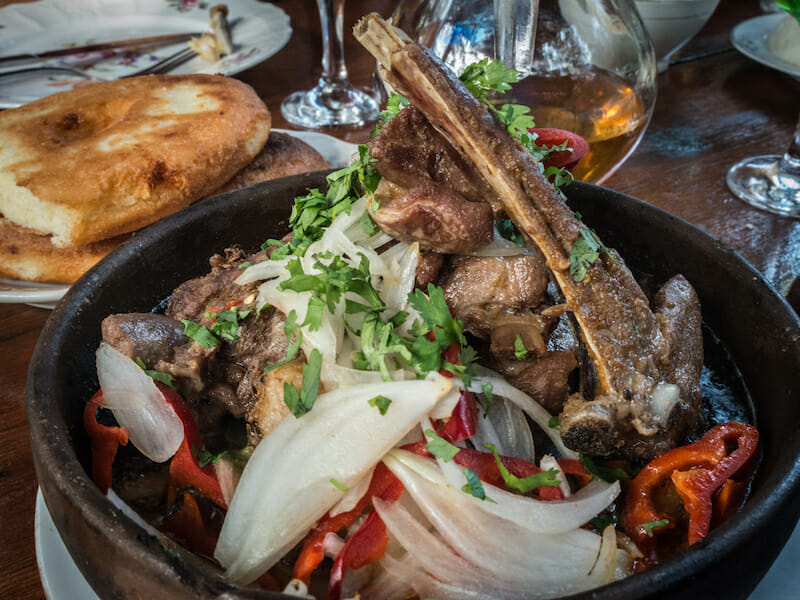 While tomato and cucumber salad smothered in ground walnuts may not be exclusively Megrelian, a nibble at the green cayenne-like hot pepper is a clear indicator it was made exclusively for west Georgian palates.

One plate of elargi is enough for two or three people, but we went overboard and ordered a portion each to accompany our main courses. The cheesy, starchy righteousness sets pretty quickly – you have to eat it hot, preferably together with a sizzling pan of kupati, Samegrelo’s spicy pig-gut sausage. Aged and lightly smoked, these bits of lung, heart and liver release layers of deep, piquant tangs unlike any other in town.

Megrelian kharcho is a peerless stew of beef, walnut, tomato, garlic and onion galvanized with a curry-like mixture of spices known as khmeli suneli. Everyone has their own recipe, but the basic ingredients are blue fenugreek, dried marigold (which Georgians call “saffron”), coriander seed and red pepper. Some add bay leaf, basil, dillweed, savory or some other spice shelf surprise, but the hocus pocus Megrelebi uses, along with perfectly cooked beef, makes their kharcho among our favorites.

It would have been shameful not to order Megrelian khachapuri, although the elargi sticking to our ribs suggested otherwise. Unlike its Imeretian counterpart, which is a round bread stuffed with cheese, the Megrelian version is a plump disc of fluffy dough with cheese inside and out, and brushed in an egg wash.

Waddling out of the coupe, the dishes we didn’t order beckoned us to return soon. Chicken in walnut bazhe sauce; the inspiriting minty cheese dishes of gebzhalia and nadugi; the cheesy cornbread chvishtari; tskhare neknebi, adjika-rubbed veal ribs. This is great food we don’t have to travel five hours west to indulge in. Megrelebi Manoni brings its home to us. 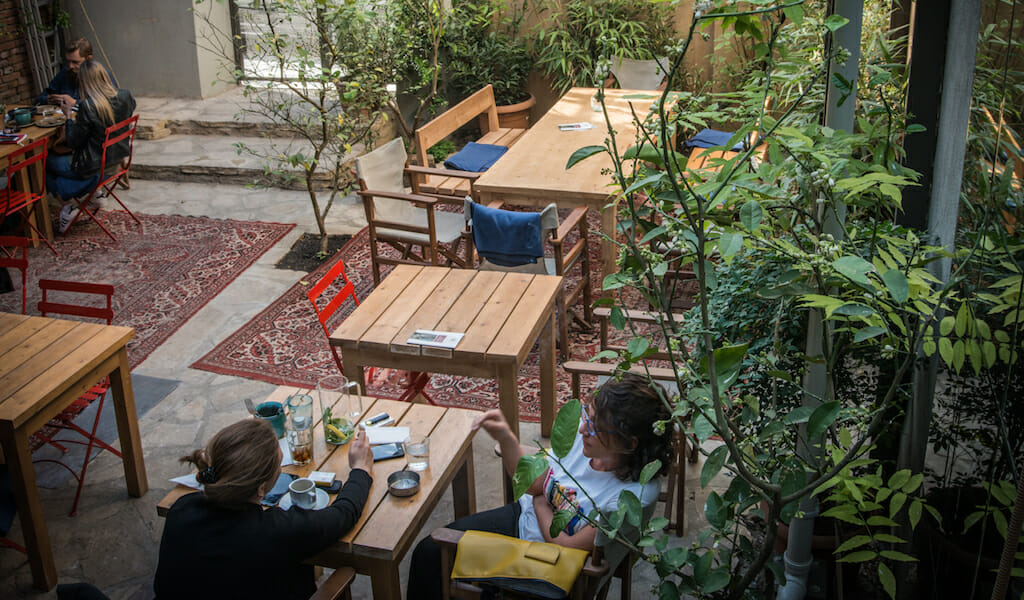 Tbilisi | By Paul Rimple
By Paul Rimple
TbilisiGoing to dinner at a Georgian restaurant typically means having to fast all day. The table will bulge with must-orders: tomato and cucumber salad, badrijani (eggplant stuffed with garlic and walnuts), an assortment of cheeses and wild greens, and probably pkhali (vegetable pate with walnuts) too. There will be meat, lots of meat – lamb,…