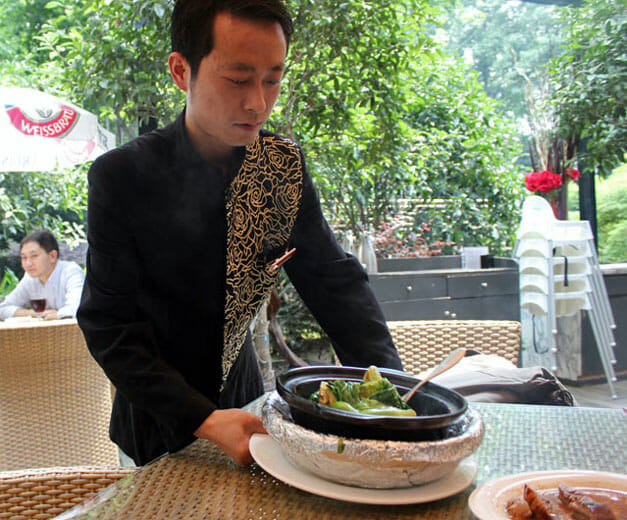 As soon as spring has sprung, Shanghai’s expat population flocks to the many patios, rooftops and terraces of the city’s dining establishments to eat and drink, but finding a Chinese restaurant with an outdoor space, especially one in the sun, can be difficult. However, just because the sun is out doesn’t mean you have to eat Western. We’ve rounded up five great places in town where you can wield your chopsticks while soaking up your daily dose of Vitamin D. In no particular order: 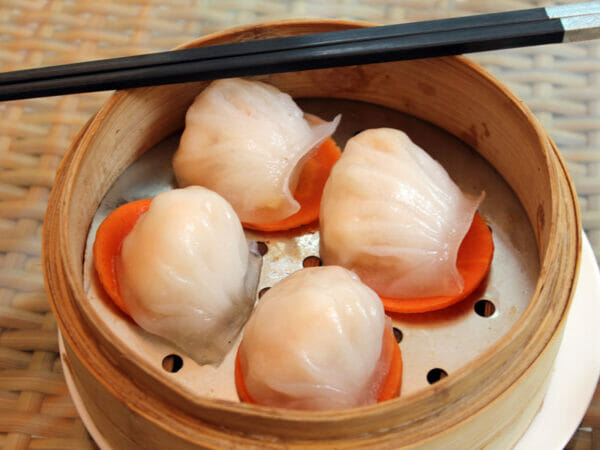 This Cantonese restaurant has a Michelin star in Hong Kong, mainly for its roasted suckling pork (烤乳猪, kǎorǔzhū), which you’ll see hanging in the kitchen window when you walk in. But head out the back door and you’ll be smack dab in the middle of Xiangyang Park, one of the city’s smallest green spaces and formerly a park for French children back when the area was a concession. German and Belgian beers are on tap, and French wine is flowing out of their cellar – the perfect pairings for a summery dim sum meal. 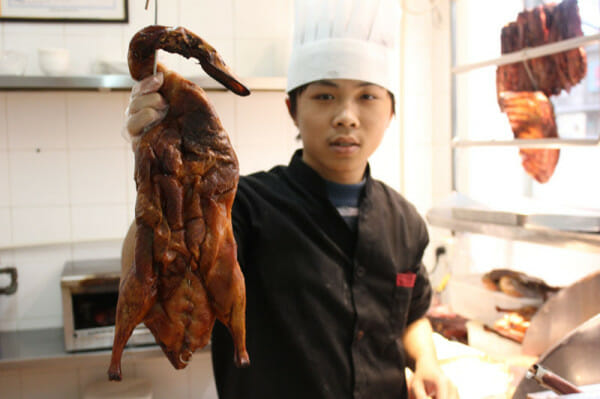 You’ve probably seen Sweeties’s couriers zipping around town on their electric scooters to deliver their famously delicious (and inexpensive) roast meat platters, but their narrow two-story shop in the former French Concession is worth a stop – mainly for its sunny porch. The tiny outdoor space barely holds two tables, but if you can snag one, sit down for afternoon tea and enjoy some Cantonese desserts, like double-skinned milk (双皮奶, shuāngpí nǎi) and signature sago pudding (招牌西米露, zhāopai xīmǐlù) topped with fresh dragonfruit, mango and star fruit. 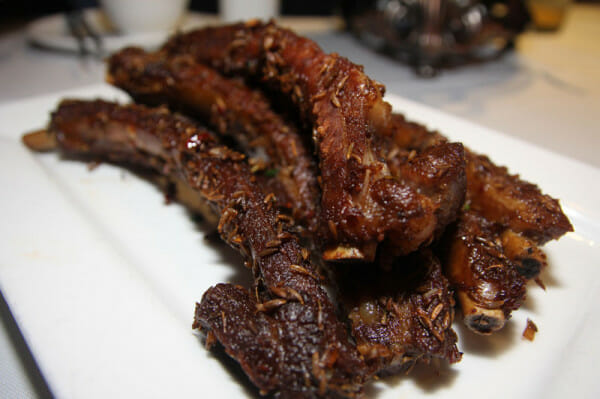 Nothing cools down the fiery flavors of Hunan cuisine quite like a summer breeze. They don’t take reservations after 6 p.m. here, so grab a beer from the convenience store across the street and sit on the steps while you wait for one of their hedged-in sidewalk tables to open up. Once you do make it to your table, try Guyi’s famous duo of spicy fish head (剁椒鱼头, duòjiāo yútóu) with green and red chilies or the uniquely savory eggs stir-fried with chilies and green beans (老家湖南蛋, lǎojiā Húnán dàn). 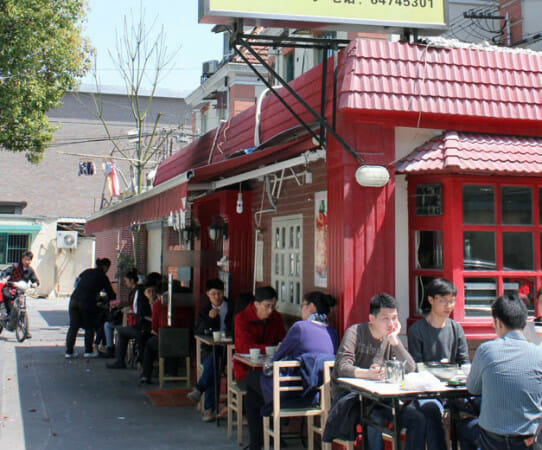 Five locations of this popular and affordable mini-chain dot the former French Concession area, but only one is blessed with outdoor seating. It’s not quite a patio, but tables line two sides of the tiny restaurant and portions of the parking area – perfect for catching some afternoon rays. The Guangdong specialties feature the requisite roasted pork and goose platters (叉烧肉／鹅, chāshāo ròu/é), but the star here is the ginger “sands” chicken (沙姜鸡, shā jiāng jī): juicy marinated chicken topped with a pile of roasted bits of ginger and garlic and an addictive savory soy-ginger sauce. It’s enough to make even the most ardent boneless-skinless-chicken-breast fan embrace the local style of gnawing through the bird au naturel. 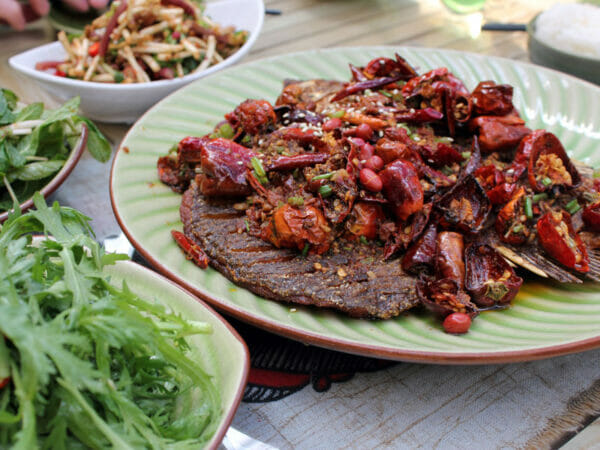 Both locations of this home-style Yunnan restaurant feature outside dining areas. The newer Dingxi Lu branch has a more secluded upstairs patio, while the original Yangzhai Lu location features streetside dining that can accommodate big groups with makeshift seating arrangements. We love just about everything on the menu, but we always make sure to order the home-style mashed potatoes ((老奶洋芋, lǎo nǎi yángyù) and the pan-fried goat’s cheese with salt and pepper (乳饼, rǔbǐng). Both dishes are just about as rare in Chinese cuisine as the relaxed alfresco dining! 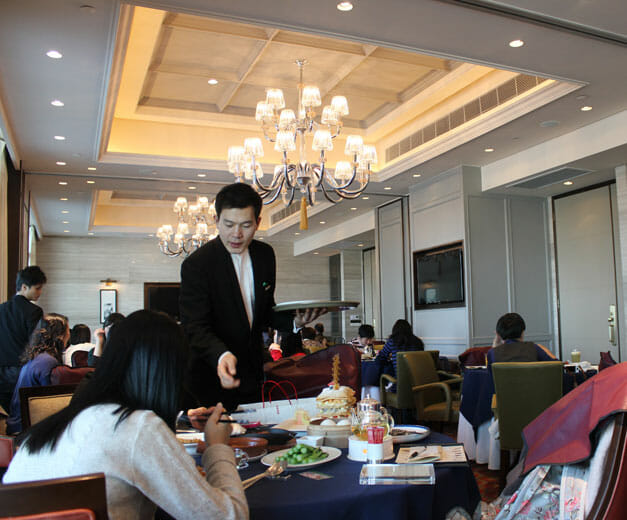 Jade Garden: Get in Line

Shanghai | By Jamie Barys
By Jamie Barys
ShanghaiPlanning dim sum with friends at Jade Garden might require “Save the Date” cards: The flagship restaurant of Hong Kong’s Maxim’s group is the hottest table in town and – at the time of printing – the next available reservation is six months away. For yum cha aficionados who aren’t deterred by hours-long queues, the… 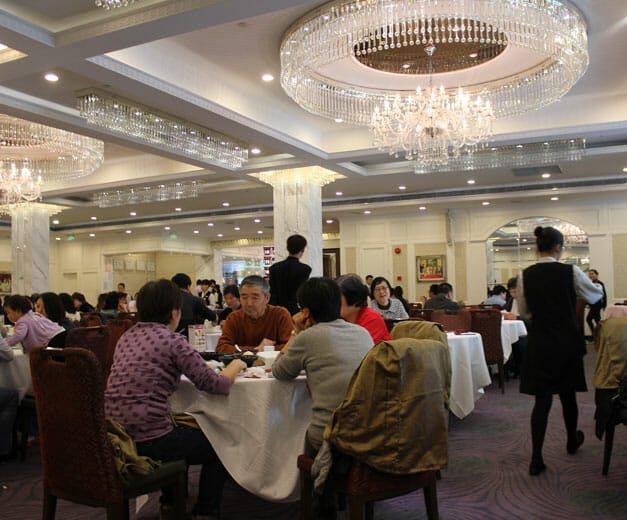 Shanghai | By Jamie Barys
By Jamie Barys
ShanghaiIf you find yourself in the waiting area at Tang Gong (an hour-long inevitability if you go for dim sum on the weekends), there’s plenty to see to make the minutes go by faster. Slip-covered chairs lined up like movie theater seats in the lobby are an ideal perch for people-watching, although you’ll have to… 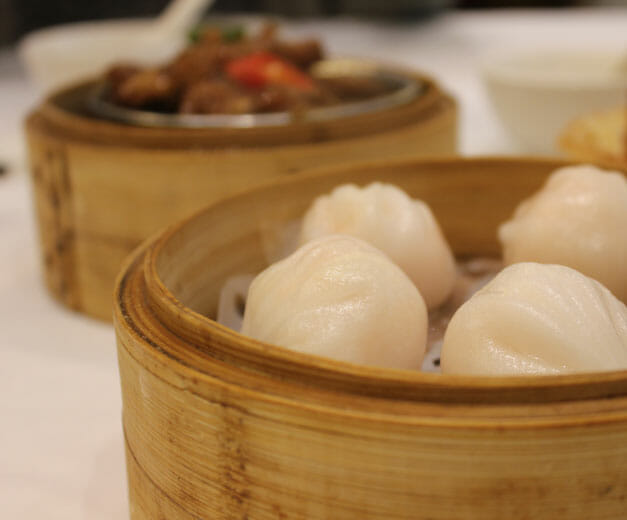 Shanghai | By Jamie Barys
By Jamie Barys
ShanghaiGirdled by the South China Sea, the islands and peninsula that make up Hong Kong have had to grow up rather than out. This geographical constraint has resulted in more than twice as many skyscrapers as any other city in the world (1,251 and counting), and many of those high-rises house malls jam-packed with some…