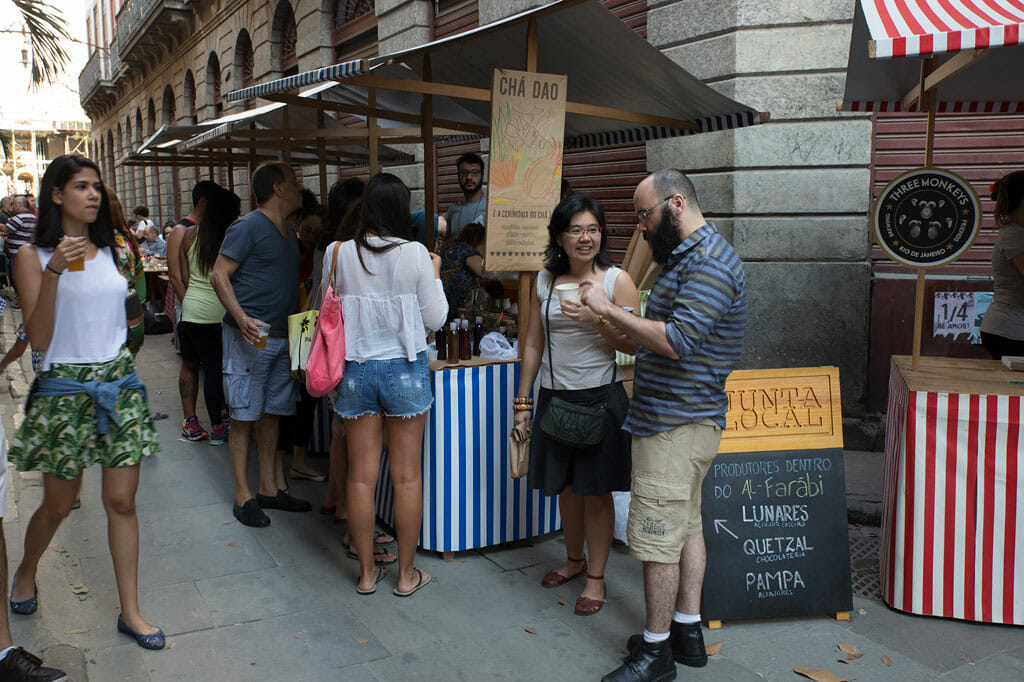 Anyone with observant eyes and a rumbling stomach will notice how newcomers to the city – and their snack foods – are cropping up like the pink beijo-turco flowers that grow in Rio’s forests after a heavy rain. There’s Hasan with his eggplant esfiha pastries amongst the popcorn vendors and candle-lighters at the Nossa Senhora da Glória church of Largo do Machado; energetic and trendy Armin with his falafel in Botafogo; tired Hafez with his boxes of savory snacks, trying to find shade on the Rua das Laranjeiras.

Brazilians didn’t need to be told to like Arab food, and now they’re getting a fresh wave of that culture’s already iconic snacks. The bready esfihas and bulgur wheat kibe may be to Brazilians what chicken tikka masala is to Brits, a formerly foreign food now amongst the country’s most ubiquitous for drunk munchers and rushed lunch-breakers alike. Arab migration dates back over a century in Latin America, and Brazil’s Lebanese diaspora is the largest in the world, with a population as high as 10 million. Some 10 percent of Brazil’s congress is of Arab ancestry.

Like their cohorts a century ago – often young, Christian men fleeing hopelessness during the collapse of the Ottoman Empire – members of today’s new Syrian wave are also fleeing conflict and turning to small enterprise to make their starts here. They come to a Brazil which opens its doors wide for those willing to enter its free-fall. In an extraordinary move, Brazil has quietly established a virtual 100 percent acceptance rate of Syrian applicants for asylum. In a country mired in a deep financial crisis that bucks quick fixes, there’s little in the way of organized anti-migrant or pro-migrant movements; Brazilians are far more concerned about their staggering job losses and the future of their democracy as talk of impeachment persists.

One of the new arrivals is Anas Rjab, 30, a bright engineer from eastern Syria’s Deir ez-Zor. The Arab Spring formed the contours of his young adult life, invigorating him until it overwhelmed him. Eager to live abroad, he had applied to a series of European universities, but though he was accepted by the schools, visas to those countries stubbornly never seemed to materialize. By 2004 he was enrolled instead in a Libyan university to study telecommunications engineering. Tripoli was a fine enough town for him, offering what he called a simple life under dictator Qaddafi. Libyans were a peaceful and nice people, and sometimes they would sneak out of their dry country to relatively cosmopolitan Tunisia next door to have a few party days. 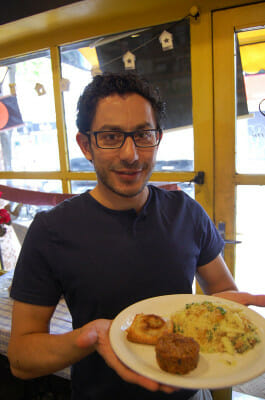 Then the revolution began. “It was very emotional, chaotic,” Rjab said. He wanted to get back to Syria, first traveling overland to Tunisia, where a fruit cart vendor became an icon of the Arab Spring in 2011 after setting himself on fire in a small town in the country’s interior. With the subsequent protests, it took only a month for the Tunisian president – in office for 22 years – to step down. With less pliancy to pressure, defiant dictator Muammar Qaddafi’s 42 years in power would end nine months later when he was gruesomely killed by rebels.

On Fridays early on in the Syrian revolution, it seemed that more people in Deir ez-Zor were turning out to anti-regime protests than not, he said. Now, the conflict in his country is creating a diaspora from Sweden to South America.

“In a few weeks, you had tanks, air raids,” Rjab said of those early days in Deir ez-Zor, a city now under siege as Islamic State fighters wrest control of the area from government forces. Asked what living in the city is like for his extended family, Rjab responded, “You don’t want to know.”

He moved to Damascus and then back to Libya after Qaddafi’s assassination. But safety would become an increasingly distant memory there too as Libya devolved into a broken state dominated by armed rebel groups. By 2015 Rjab was joining the masses of refugees making their way to Turkey in search of new homes.

A Syrian friend in Istanbul went to the Brazilian consulate to apply for a tourist visa to visit the country for Carnival. There, an employee uttered the words that refugees so rarely hear: Why don’t you stay in Brazil? We’ll give you a visa.

That friend now lives in a quiet Rio beachside neighborhood, and Rjab took the cue, too. “My main thought is it’s a legal way to relocate,” he said. “Then, of course, the beaches.”

When he got to Rio, Rjab sent his CV “left and right to everybody,” but no one called him back. He’s relatively sanguine about it. “I understand. It’s hard even for Brazilians.”

It may not seem like the most natural next thing to do, but the engineer decided to fall back on something he’s always loved to do: cooking. Rjab’s Simsim, “sesame” in Arabic, began as a brick-and-mortar eatery, but now he takes catering orders during the week and sometimes serves food at the roving Junta Local street fair. His food may be Rio’s healthiest manifestation of the Brazilian-beloved Arab cuisine. It has a lightness and originality that leaves diners satisfied and ready to enjoy a leisurely afternoon rather than needing a nap. Rjab believes in baked-not-fried and fresh, natural flavors, like dried apricots and green apples, to lighten up his couscous – a dish he learned to cook during his time in North Africa. His sundried tomato kibe – another unorthodox take on a Middle Eastern staple – packed a flavorful punch and crumbled in a satisfying way. We were most taken with his traditional appetizer spreads, like his coalhada (better known as labneh), which was nicely smooth with a creamy finish. It went along well with his muhammara, a red pepper spread, whose spiciness was a notch above the usual carioca safe zone.

While the U.S. and Europe engage in noisy and often racist national debates about admitting Syrian refugees, Brazil’s open-door policy has largely been met here with a response teetering between indifference and smiley “well sure, why not?” supportiveness. Brazilians in the not-so-distant past migrated in large numbers to wealthier countries and often express surprise that a foreigner would choose to come here. Rjab said when locals find out he’s Syrian, they often respond, “I’m very sorry for your country.”

Mirian Alves, an anthropologist who studies migrant communities and who recently began a research project about new Syrians in Rio, was a frequent guest at Rjab’s Saturday brunch when he used to host it in a small Botafogo bistro that has since closed. Many of the earliest migrants fleeing the conflict around 2011 came because of family connections in Brazil, Alves said, while later ones have often learned about the country’s open door through social networks. “Brazil is not totally unknown to Syrians,” she said, adding that Syrian schoolchildren often learn about their diaspora in Brazil. From the other side, Arabic cultural relics like the architecture of Rio’s downtown Saara market and Middle Eastern last names have become part of the Brazilian cultural landscape.

“It’s a community that in terms of social ascension was able to reach prestigious positions in our Brazilian society,” Alves said of the historical Syrian-Lebanese migrant waves. “Arabic last names in Brazil are last names that are part of the cultural elite, the economic elite and particularly the political elite.”

Alves also points out that while Brazil is a country that in many ways has a “self-centered” national identity, recent decades have seen growing discussions of multiculturalism and distinct ethnic identities here.

What kind of place this new diaspora finds for itself in Brazil – and that Brazil finds amongst the stories the diaspora tells about itself – is a real-life experiment. Much of it is taking place in the kind of quiet cultural laboratories that begin with a shared meal and provoke the slow rearrangement of tastes, values, preferences and references that, if Brazil’s earliest Arabs are an example, once set in motion will not be turned around.

It’s a good thing Rjab wanted to travel from an early age. Nowadays he can see a future for himself in Brazil but added that he could also imagine a life elsewhere. “Anywhere but home,” he said.